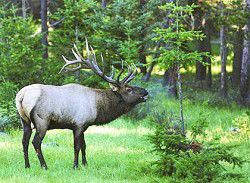 Faced with a change of climate, elk are among the anima;ls that may do better, as they are more adaptable to various habitats. Bear, like the one below, will follow their food sources, which could lead to conflict with humans. At lower left, geese, such as these photographed on Wallowa Lake, may change their migration patterns, along with hundreds of other bird species - <I><BR>Chieftain file photo</I> 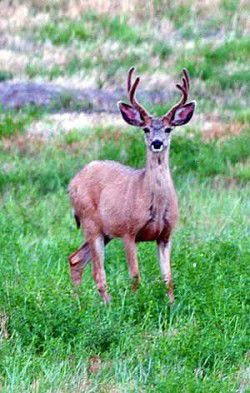 Decent hunting in the forecast for the 2006 season

Faced with a change of climate, elk are among the anima;ls that may do better, as they are more adaptable to various habitats. Bear, like the one below, will follow their food sources, which could lead to conflict with humans. At lower left, geese, such as these photographed on Wallowa Lake, may change their migration patterns, along with hundreds of other bird species - <I><BR>Chieftain file photo</I>

Decent hunting in the forecast for the 2006 season

Unlike the mild winter of 2004-05, last winter was considerably colder and snowier east of the Cascades and longer and wetter from the west.

As a result, big-game hunters heading into the field at lower elevations this fall will probably see some impact on their opportunities for success, combined with predation and disease in some parts of the state.

Nevertheless, most Oregon Department of Fish and Wildlife biologists think this season's big-game hunting opportunities will be decent within their respective wildlife management units, on a par with previous years. The downside to this prediction is that areas that offered decreasing opportunities in the past may not have improved much.

DeerAlthough doing much better than blacktails, mule deer east of the Cascades are having some problems this year as well.

"Fawn survival was down and there was quite a bit of mortality," says ODFW district wildlife biologist Vic Coggins, who is based in Enterprise. "Last summer and fall were extremely dry and that really hurt the deer that live out on the grasslands." Fawn survival has gone down from 50 percent, which is good, to about 30 percent.

"That's not the bottom," said Coggins, "but it's not a survival rate either. "He also notes that there are lower deer densities in the backcountry, which has been typical in recent years, although he is not seeing that trend beginning to reverse itself a bit. Overall, Coggins expects an average mule deer season, but hunters will likely see fewer yearling bucks.

The story is somewhat similar in Southeast Oregon, including the Silvies, Malheur, Juniper, Steens, Beatys Butte and Whitehorse units, where deer numbers are on the low side.

Adult mortality is still high, mostly due to predation. Overall, the trend is stable and hunters will see mule deer hunting opportunities similar to last year.

"Deer have been doing pretty good over the past couple of years," said Greg Jackle, assistant district wildlife biologist for ODFW's Grant District. "There should be a few more large and medium bucks this year, and even more smaller bucks."

Although many hunters set their sights on the Murderers Creek Unit, which regularly yields big bucks, Jackle suggests taking a good look at the Desolation Unit as well. "It's not typical mule deer hunting country because it has lots of trees, but there are good numbers of deer hunting opportunities for this fall in this area.

Northeast Oregon has had problems in recent years with low calf survival. That is changing somewhat. "Over the last few years we've had improved calf survival rates in some wildlife units," Coggins said. "Bull ratios are pretty good in most units."

Coggins attributes this uptick to an increase in the local cougar harvest. Data collected by the ODFW points to cougars as a significant cause of elk mortality in this part of the state.

He reports there are good numbers of elk in the Imnaha Unit, but bull numbers have dropped off. On the other hand, the Snake River Unit has better bull ratios than have been seen in some time, though calf survival is down.

The Wenaha, Mount Emily and Walla Walla units have recently changed from a general elk season to limited entry. Too many yearling bulls were being taken under the general season regulations and the limited entry tack is designed to get those numbers back up again.

"Elk are looking good and tag numbers will be the same as last year," Jackle said. Elk populations in this area have been stable for the past few years. Jackle attributes good spring and fall green-ups last year as partly responsible for this year's healthy elk numbers.

With the 1,642 elk in the Murderers Creek Unit, 1,776 in the Northside Unit and 1,328 in the Desolation Unit, they are all fairly close to management objectives. Murderers Creek is known for its big bulls, but Jackle pointed out that Desolation has lots of elk and more rifle tags available.

Pronghorn AntelopePronghorns are doing fine throughout Southeast Oregon, with a population that probably exceeds 10,000 animals. This year, biologists noted high overall numbers with good buck ratios and fawn recruitment. They will be recommending a few more tags for this season. Garner pointed to better weather conditions and a smaller overall coyote population as contributing to the currently strong pronghorn population.

Pronghorn numbers are also good in the Grant District. Jackle noted that the best hunting is in the Bear Valley, which is made up mostly of private lands where permission to trespass must be obtained before hunting. There are also some opportunities to be had in the John Day River Valley and the Philip W. Schneider Wildlife Area.

Bighorn SheepFor the most part, bighorn sheep are doing well throughout their Oregon range. There has been a small decline in the North Catlow Rim herd that is resulting in only one tag being offered this year, instead of the usual two. Garner said he thinks this decline is due to natural mortality, accidents and perhaps some cougar predation.

In the northeast, the Wenaha unit will be opened for bighorn hunting for the first time since 1997. "We know from our surveys that there are some very large rams in there," Coggins said.

Rocky Mountain Goats"Rocky Mountain goats are doing well," Coggins reported. "I expect hunters will have a decent season," His cautions, however, that ODFW does its goat population surveys in the summer and winter can change the equation. Biologists will not know for sure until the snow in the high country melts out enough to get back in and do another count.

BearIn the northeast, Coggins suggested that fall bear hunters concentrate in riparian areas and old orchards or other locations with lots of fruit.

ODFW has initiated a multi-year bear population and distribution study by injecting captured bears with tetracycline. This chemical turns up in a bear's teeth as a marker and bear hunters are urged to turn in a tooth of any animals they kill.

CougarAlthough cougars are distributed throughout Oregon, with a currently estimated population of about 5,000 animals, the best hunting opportunities are found in Eastern Oregon where they can be tracked after new snow.

"We have a group of local hunters who like to specifically hunt cougars and get out as soon as there is fresh snowfall for tracking," said Hines-based Garner, who advises that cougar follow the deer, making winter deer range a good bet for locating cats.

Since most hunters take cougars incidentally while hunting other game - especially in heavily forested Western Oregon where bare ground tracking is essentially impossible - Coggins said he strongly recommends that hunters invest in a cougar tag before heading into the field this fall.