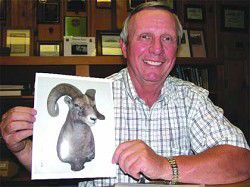 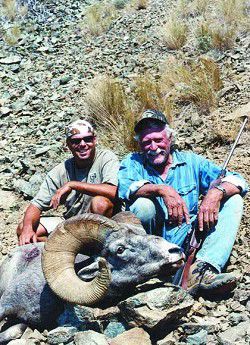 Frank Green, right, spent $86,000 to purchase a tag to harvest this Rocky Mountain bighorn sheep. Pictured with him is guide Jon Barker.

Frank Green, right, spent $86,000 to purchase a tag to harvest this Rocky Mountain bighorn sheep. Pictured with him is guide Jon Barker.

If a hunter is lucky enough to draw a bighorn sheep tag, those who have gone before say it's best to make the most out of what is truly a once-in-a-lifetime experience.

"It was a fun hunt - something that you look forward to all your life if you're a hunter," said Terry Decker, 61, of Enterprise.

Hunters are only eligible to draw a bighorn sheep tag once in a lifetime, and each year there are many more who put in for a tag than the few who are randomly selected to get a tag.

Decker was feeling rather lucky the day he got his bighorn sheep tag. "Actually the day I won this, I went down and bought some lottery tickets, but I didn't win," he said. He had better luck on the actual hunt.

After 11 years, Decker's memory of shooting a ram on Oct. 12, 1995, still lingers in his mind. He shot it on the first day of his hunt near Cactus Mountain, not far from Dug Bar on the Snake River, some 20 miles away from Imnaha.

The ram was one of a herd of 13 and it had probably the sleekest hair of the pack, Decker said.

Interestingly, the sheep were lying down and intently watching a trail down below them where people would hike up from the Snake River, he said. They (the hunters) were perched above the sheep.

"These sheep were watching people going down the trail. They were concentrating on them and not on us," Decker said.

They always say not to be the first one to shoot a bighorn sheep, he said, but his friend counseled him not to listen to that saying and to go ahead and take the shot while he had the chance, because if he didn't then other hunters would shoot at them and they might not get another chance. So Decker took his shot and got him. Then came the hard part.

"The toughest part of the hunt was packing it out," he said. The hunting party later loaded up the body and began to pack it out - about a mile hike upwards. "Each of us had 55 pounds of meat on our back," he said.

One of the nicest parts of that hunt, Decker recalled, was staying at the historic Litch Ranch, about six miles up Cow Creek. They had gotten permission to stay there and it made it extra special since he had known some of the original family members that had lived on the ranch before it sold, he said.

What advice would Decker give to hunters going out on their lone bighorn sheep hunt?

"It's once in a lifetime so it's worth the effort to do it right," he said. "The first thing you want to do is get in shape."

This is especially true for older hunters, he said. Decker rode his bike for 10-15 miles a day prior to that season getting himself back into shape. He cautioned against doing too much trekking up and down the mountains prior to the season because "You can wear yourself out and you don't realize it. You've got to take your time."

He also recommended getting a good guide who knows the area very well.

"It was a blast. Probably the funnest hunt I've been on thus far," Witherrite said of the experience.

Witherrite recommended doing a lot of scouting of the herd prior to the actual hunt. Prior to shooting his ram, Witherrite said he drove down to Imnaha every weekend to scout out the bighorn sheep herd. That way, he picked out the one he wanted to shoot about two months before and then "kept an eye on him right up until the season started."

"It was just a once in a lifetime experience - so just try to make the most of it, I guess," Witherrite said.