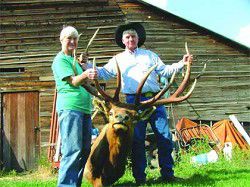 <I>Elane Dickenson/Chieftain</I><BR>Veteran hunter and former guide Manford Isley and his wife, Vera, stand by the mounted head of the largest elk he ever shot over 45 years ago. 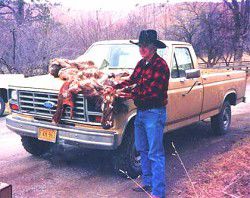 Manford Isley shows off the spotted hide of the 'Appaloosa' elk cow he shot in 1990.

<I>Elane Dickenson/Chieftain</I><BR>Veteran hunter and former guide Manford Isley and his wife, Vera, stand by the mounted head of the largest elk he ever shot over 45 years ago.

Manford Isley shows off the spotted hide of the 'Appaloosa' elk cow he shot in 1990.

When veteran hunter Manford Isley shows off the mounted head of the biggest elk he ever shot - a huge bull that dwarfed most of its species - he also likes to tell about the "the one that got away," which, he said, was even bigger.

Isley, 72, of Joseph, grew up hunting in Wallowa County and for almost 30 years parlayed his knowledge and skills into a successful packing and guide business with his wife, Vera, at his side.

The couple first opened Isley's Guide and Packing Service in 1962 and bought out the Eagle Cap Pack Station from Hugh and Ruby Holmes in 1978.

A black ice auto wreck on Creighton Lane near Joseph in 1985 slowed him down a bit and the Isleys sold the pack station in 1990 to the McDowells family, which continues to operate the business.

Isley broke his neck in the auto accident and his doctors said he'd never ride again, but he was back in the saddle and guiding elk hunters again by October. "I tell everyone they put me back together with baling wire," he said. "That's when we started to downsize," A couple of years after the accident, he adopted his first Kiger mustang, a breed descended from original Spanish mustangs, and since his retirement from packing spends most of his time raising Kigers.

In addition to being partner (and camp cook) in the guide business, Vera Isley also worked for many years at Wallowa Memorial Hospital, and retired just a couple years ago. While she defers to her husband's hunting prowess, she has bagged her share of game, including a six-point bull elk just last year that had antlers on only one side of its head.

One year ,she was riding out to camp by herself and shot a beautiful deer, and when she got to camp she told her husband, "I bet I got a bigger buck." As luck would have it, earlier that same day, he shot an even bigger one. "It was huge. ...My deer had a much prettier set of horns, though," she added pointing to a mounted six-point head on their living room wall.

It was dwarfed, however, by her husband's trophy elk, which he shot around 1960 in the Gumboot area before he ever became a commercial packer. In those days, when he was still in his 20s, Isley said that his hunting partner, his oldest brother, never messed around with setting up a real camp, just slept under a tarp over a rack in the back of a truck.

Isley remembers the day he shot his trophy elk very well. It was just before Thanksgiving, and he was already pretty tired. He'd hunted all day on foot on snow above his knees. "I was just about give out," he recalled. Just before heading back to "camp," he climbed up on a little ridge and saw "a hellacious big bull" just across a canyon, lying down.

He sneaked over a hill to get a shot, and about that time an aggressive buck appeared and started toward him, as if wanting to attack. "I threw snow balls at him," Isley said, and the animal finally took off.

"The elk was still laying there. I was tired, but pretty excited. He turned around, and I shot him. Actually, Isley had to shoot the animal three times before it took a final leap and disappeared over the hill. It slid down and ended up wedged under some windfall trees. With antlers as big as they were, he was finally able to twist them around to free the elk.

Isley said, after field dressing his trophy, he had to leave it there for the time being, but did carry out the heart and liver "That was a big mistake. They weighed about 40 pounds. I got back to camp after midnight." The trek, he estimated, was six or seven miles.

The next day was Thanksgiving and the two brothers drove home, and then they returned the day after Thanksgiving for the elk. Isley said the temperature was 20 below zero and, of course, the elk was frozen. The four quarters of meat they packed out weighed 500 pounds, he said.

If anyone doubts the size of that elk, Isley has the proof in the gigantic mounted head. He said that the base of the antlers is as large as the record Boone and Crockett elk, but because of points taken off due to irregularities, it scored "only" 366 5/8 points.

"I had a chance to shoot a bigger one," Isley said.

The one that got awayIsley said that the hunters that he'd been guiding had already gone home in a camp up the Imnaha around 1978, and he and the two people working for him stayed behind. He knew there was a huge elk around the area and was lucky enough to spot him eating. Isley sneaked up as close as he could on hands and knees and was just about to shoot, when something spooked the animal.

It was one of Isley's guides, who was also trying to draw a bead on the elk. "That was probably the biggest bull elk I ever saw," Isley said, admitting that he was almost glad that he didn't kill it.

There were later reports of sightings of the elk. He said that, as far as he knew, no one else shot it either - Isley thought he would have heard about one that big - though it might have been crippled and went off to die somewhere.

The Appaloosa ElkProbably, the most unusual animal Isley ever hunted wasn't a bull, but a cow elk covered with Appaloosa-like white spots on its body.

Isley had watched the animal for several seasons - her calves apparently didn't inherit her markings - and finally decided to bag it before someone else did. He shot it in 1990.

"I wanted that hide," Isley said. Isley and the cow's hide appeared in a photo on the front page of the Wallowa County Chieftain with a story in which Isley asked for anyone who'd ever seen a similar elk to contact him, and he finally heard from a woman who'd seen such an elk decades before.

The Isleys said that the guide business changed a lot over the years, especially the expectation of their clients.

"When we first started out, we had blocks of wood to sit on and a place to sleep on the ground," Isley remembered. "We didn't think about taking ice in coolers because it was cold out," Vera added. "Now, if you have a guided camp, you have to have ice to put in people's drinks. It used to be if you had stew or beans to eat and hotcakes for breakfast everyone was happy. Now they demand more variety. One of the biggest thing we didn't used to have was salad."

The Isleys have fond memories of their packing and guide years, though, and said they had a lot of clients that came year after year. "I was a very successful guide," Isley said, saying hunting experience and knowledge of the country are the keys to success.