The Tamkaliks celebration will be held in July in Wallowa. 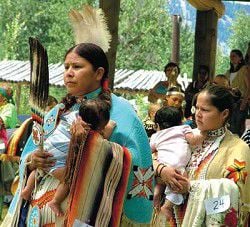 Nez Perce history will be on display.

The Tamkaliks celebration will be held in July in Wallowa.

Nez Perce history will be on display.

During the third weekend in July, the homeland of the Wallowa country's native people, the Nez Perce, will once again come alive with the sounds and sights of a culture not quite gone, and certainly not forgotten.

A dance arbor and teepees under a dramatic rim rock just outside Wallowa provides the setting for the Tamkaliks Celebration, which will observe its 19th year Friday through Sunday, July 17 through 19.

The event commemorates the ancestral, historic and modern role of the Nez Perce in the Wallowas, and also serves every year to strengthen the bonds of friendship with present-day inhabitants of the Wallowa Valley.

This nonprofit organization - a coalition of native descendants living on three reservations, present-day inhabitants and other committed individuals - is often called the Homeland Land Project. Its goal is to create a physical place to enhance the relationships between the descendents of the Nez Perce natives and today's residents, to preserve and celebrate the native culture and to educate the public on the history of the area.

While the Tamkaliks Celebration is only one activity of the WBNPTIC, it is a very important event for the organization.

It is an annual combination homecoming and family reunion for many of the Indian participants, and a chance to be part of a colorful, exciting weekend for visitors.

It was founded in 1991 as the Wallowa Band Nez Perce Descendents Friendship Feast and Pow-Wow, held in the Wallowa High School gym by the late Earl "Taz" Conner in friendship with non-Indian residents of the Wallowa Valley. The pow-wow and celebration helped inspire the formation of the nonprofit WBNPTIC in 1995.

This year, after multiple delays, construction of a longhouse for religious and social gatherings is expected to be underway on the property by early summer. Also a pole shower house will be built and available for Tamkaliks participants and anyone camping on the property (it's free!)

On Saturday of Tamkaliks weekend, the Wallowa townspeople hold a giant citywide yard sale, which has become a popular bonus to the already much-anticipated event.

Another event sponsored by the coalition is the Nez Perce Art in the Wallowa art show (at Wallowa Lake Lodge) and dinner with Native American entertainment (Joseph Community Center), scheduled for Saturday, Sept.12.

Visit (www.wallowanezperce.org) , call the office in Wallowa at 541-886-3101 or e-mail (Tamkaliks@gmail.com) for more information about the Wallowa Band organization, Tamkaliks or the art show.