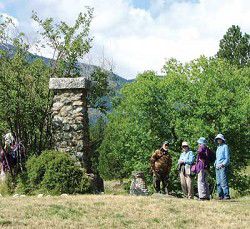 The nez perce peoplePresence still felt in wallowa countyEjected from Wallowa County against their will in 1877, the modern Nez Perce have a significant modern-day presence in the ancestral homeland of the Wallowa band.

Cooperation, interaction and friendship between native descendents and non-Indian county residents have grown significantly, especially over the past two decades.

Visitors interested in the Nez Perce can learn more about their history as well as modern activity at a number of county destinations:

The property is the home of the annual Tamkaliks Celebration (July 15-18, 2010), as well as a place for family, tribal, cultural and community gatherings.

Sometimes referred to as the Homeland Project, the nonprofit also supports a historic photo exhibit, which is open during the summer months on Main Street in Joseph, and the Nez Perce in the Wallowa art show at Wallowa Lake (Oct. 2, 2010).

Iwetemlaykin State Heritage SiteBlessings of Wallowa Band descendents from three reservations mingled with the words of Gov. Ted Kulongoski at the October 2009 dedication of the 62-acre addition to the Oregon State Park system near the foot of Wallowa Lake.

Iwetemlaykin means "at the edge of the lake" in Nez Perce and is pronounced ee-weh-TEMM-lye-kinn.

For thousands of year the land was an important fishery for the Nez Perce and related tribes who gathered to catch spring Chinook salmon. It has long been considered a sacred place by the tribes.

For decades controversial developments were proposed for the property; it was finally purchased from private ownership by the state parks department, with tribal and nonprofit support, in 2007.

The site is intended for day use only. Short hiking trails lead to a small pond, and follow a tree-lined waterway that serves as an irrigation ditch. The Wallowa River flows along the south boundary of the park. The hilly property borders the Old Chief Joseph Cemetery, which is a Nez Perce historical park site and is at the end of the terminal moraine formed by glaciers.

Location: One mile north of Wallowa Lake on the north side of Joseph. The main entrances is off the Wallowa Lake highway.

Nez Perce National Historic ParkThis national park is made up of 38 sites in four states that commemorate the history and culture of the Nez Perce. The four Wallowa County sites are:

? Old Chief Joseph Gravesite and Cemetery - This 5-acre site near the north end of Wallowa Lake includes a tall stone monument that marks the grave of Old Chief Joseph, who died in 1870. He was reburied here in 1926 with great ceremony . The cemetery, a national historic landmark, is separated from the highway by a stone wall built by the Umatilla Tribal Civilian Conservation Corps in 1938-1940.

? Dug Bar - This is the traditional Snake River crossing that Chief Joseph and his people, with all their horses and livestock, used when they were forced to leave Wallowa County in 1877. It is on the Nez Perce (Nee-Me-Poo) National Historic Trail. Dug Bar is the only place in Wallowa County with vehicle access to the Snake River. It is about 28 miles (and two-and-a-half hours) down a rough windy road from Imnaha; high clearance vehicles with good tires are recommended. It follows the traditional route between summer camps in the Wallowa and winter camps along the Imnaha and Snake rivers.

? The Joseph Canyon Viewpoint - at a highway pullout along Highway 3 approximately 30 miles north of Enterprise.The privately-owned Joseph Canyon is an example of the canyon-bottomland environment where the Nez Perce people lived in winter. In the late 1990s, the Nez Perce Tribe acquired 15,000 acres in the Joseph Creek watershed, now managed by the tribe's wildlife department. Tradition has it that Chief Joseph was born in a cave in Joseph Canyon.

? Lostine Campground - This site represents a traditional Nez Perce campground and fishery at the historic junction of the Lostine and Wallowa Rivers, and epitomizes the long-term occupation of the Wallowa Valley by the Nez Perce people. The upper valley Nez Perce experience is interpreted at the nearby Homeland Project property outside Wallowa.

? Nez Perce Tribal Fisheries - The Nez Perce fisheries works with the Oregon Department of Fish and partners in the management of fish resources in Wallowa County. It lists 16 full-time employees through its Joseph-based field office.

The Tribal Fisheries' ambitious mission statement is "to recover all populations and species of anadromous and resident fish within the traditional lands of the Nez Perce Tribe as stated by the Treaty of 1855."

Location: Nez Perce Fisheries field office, 500 Main Street, Joseph. Brochures and other information are available and visitors are invited to stop by.