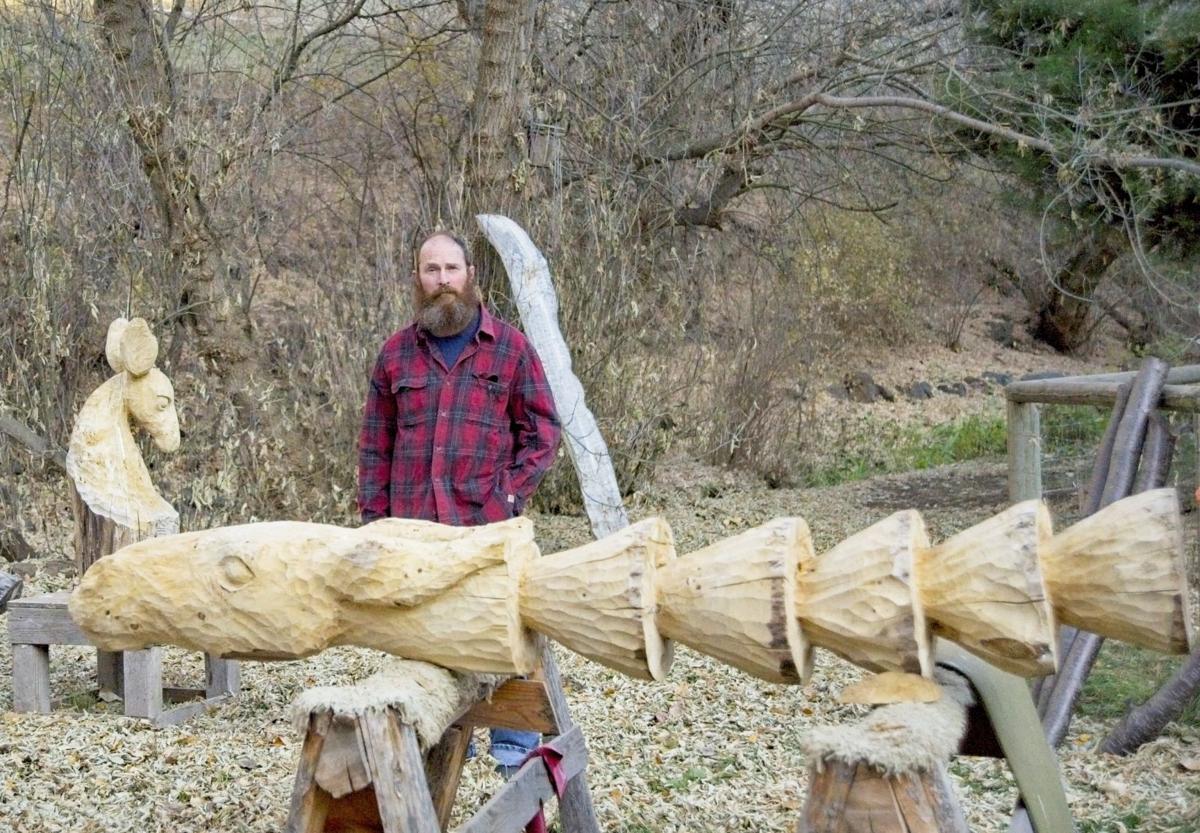 Multi-artist Ken Hunt, of Imnaha. Hunt is a master in many mediums of art. Here he is with two wood carvings in the making. He also makes furniture, builds and carves saddles and other leather work, paints, sculpts in both wood and stone and braids rawhide as well. 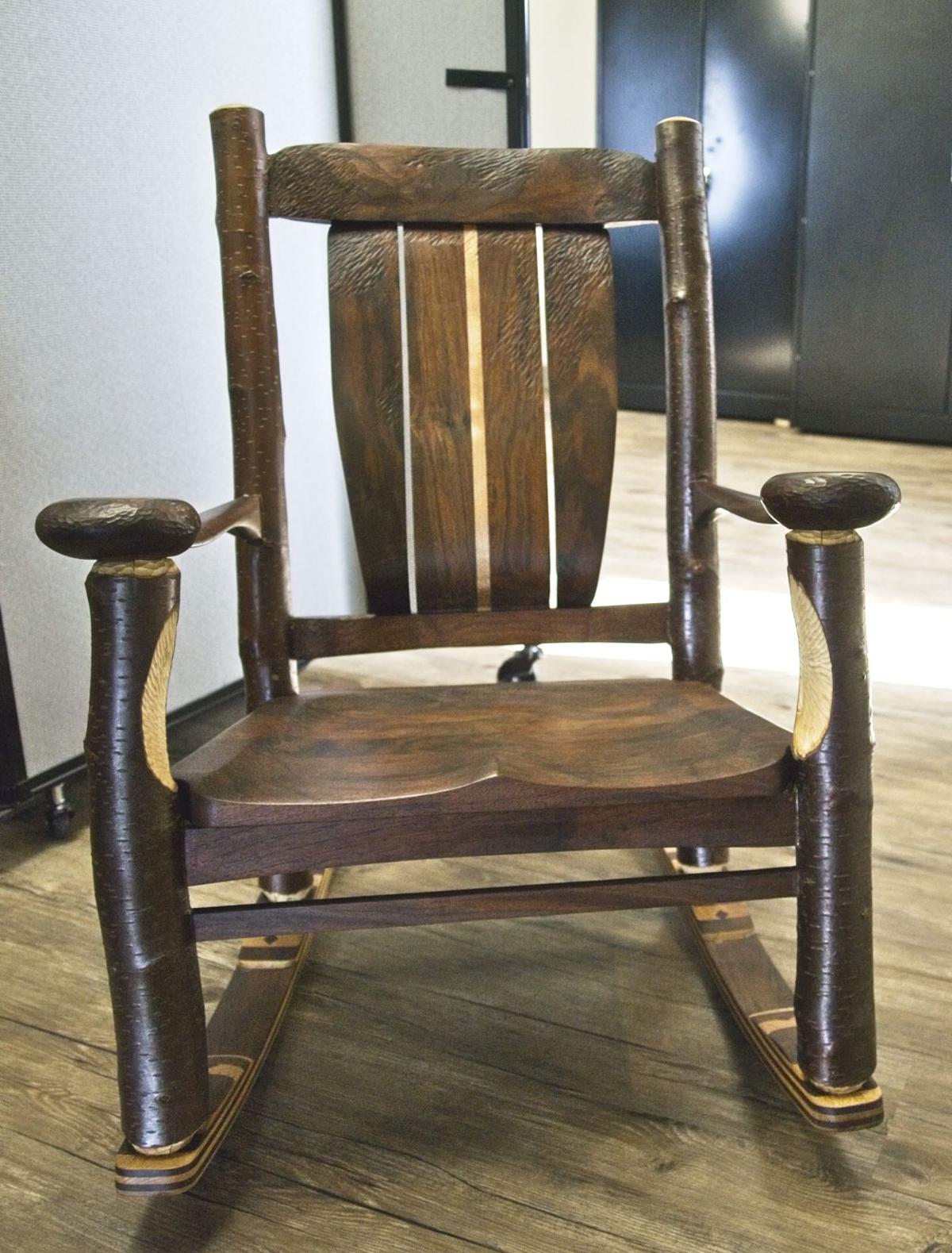 Built to last — This walnut/ash/maple chair in county commissioner Todd Nash’s office is as comfortable as it is rugged looking. Artisan Ken Hunt of Imnaha crafted the piece. 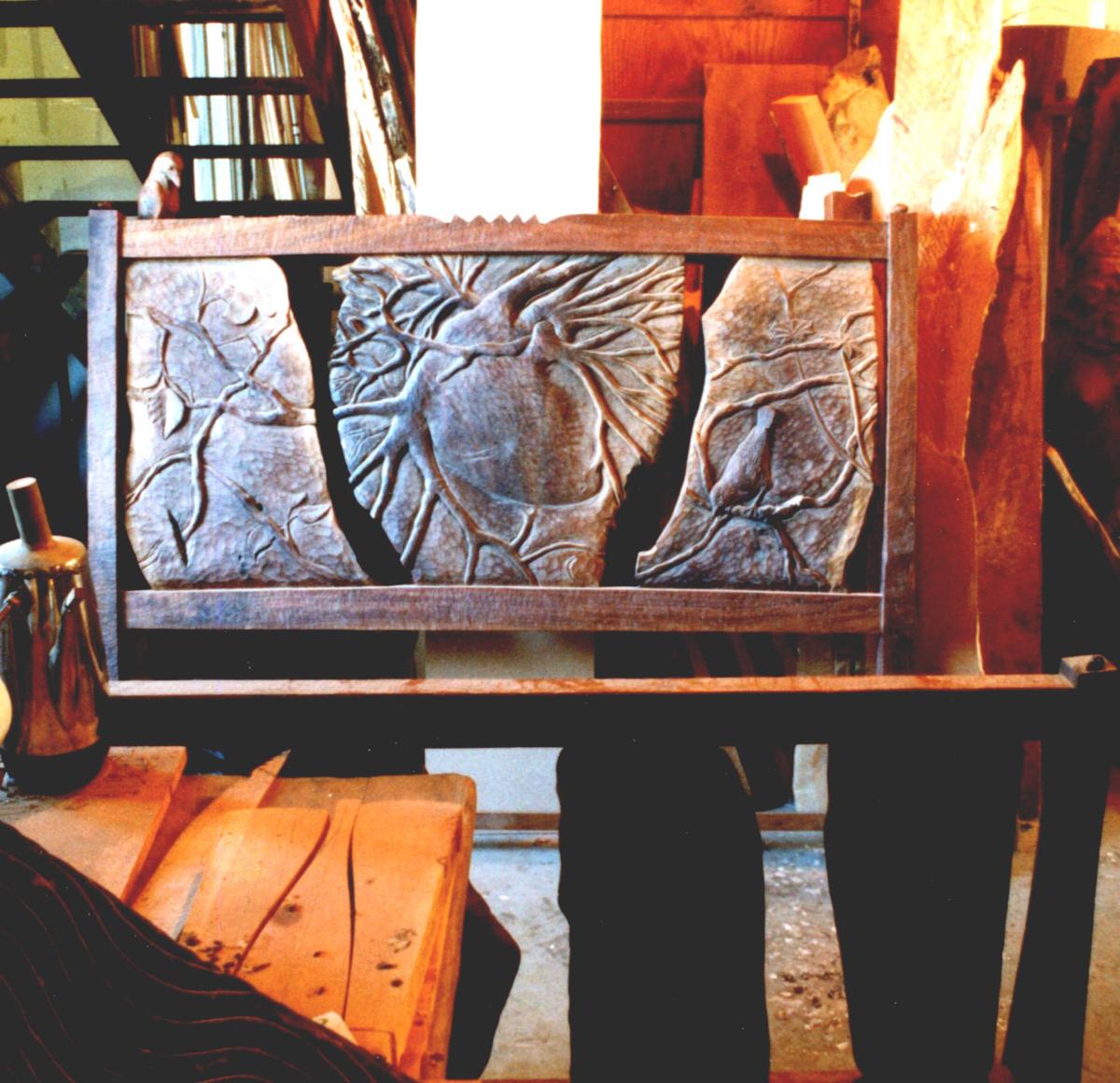 Note the detail on this exquisitely crafted triptych/bedframe by Imnaha artist, Ken Hunt, the subject of a multi-piece feature in the Chieftain. 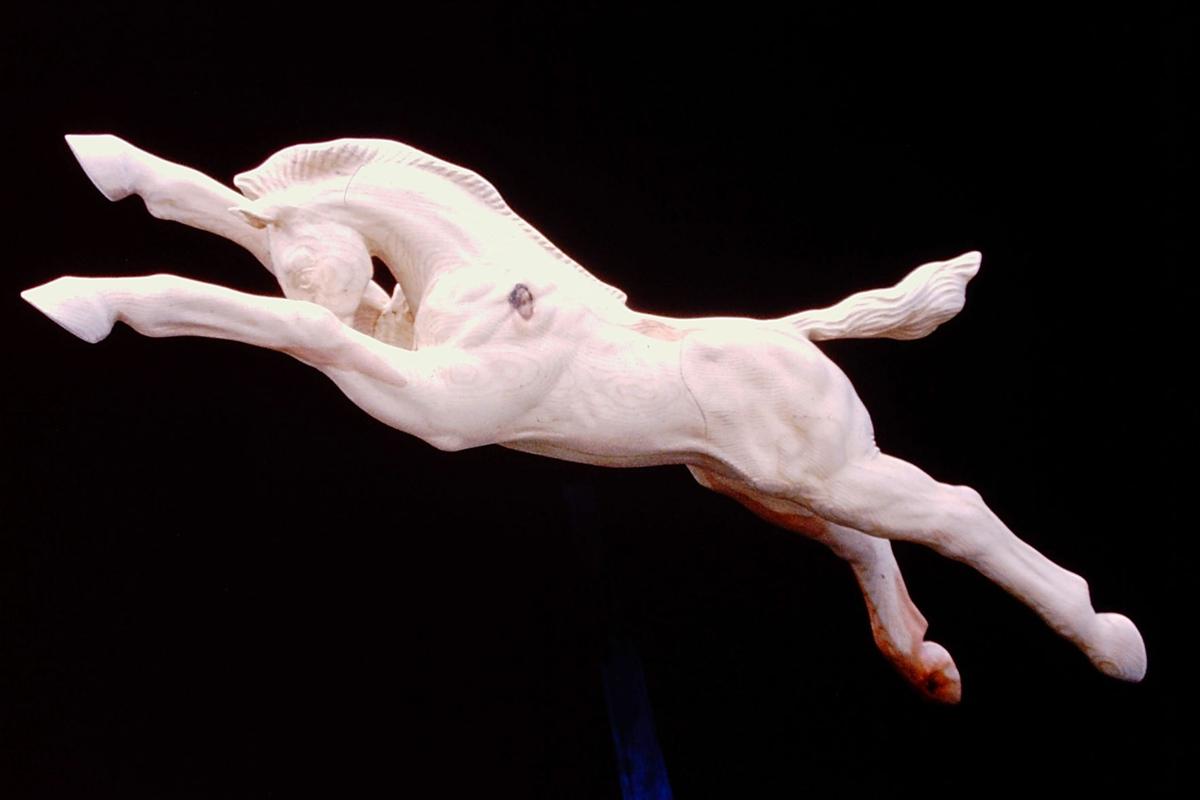 Leap of faith — note the fine detail of this leaping horse carved by Imnaha artist, Ken Hunt, a master of a number of art forms.

Multi-artist Ken Hunt, of Imnaha. Hunt is a master in many mediums of art. Here he is with two wood carvings in the making. He also makes furniture, builds and carves saddles and other leather work, paints, sculpts in both wood and stone and braids rawhide as well.

Built to last — This walnut/ash/maple chair in county commissioner Todd Nash’s office is as comfortable as it is rugged looking. Artisan Ken Hunt of Imnaha crafted the piece.

Note the detail on this exquisitely crafted triptych/bedframe by Imnaha artist, Ken Hunt, the subject of a multi-piece feature in the Chieftain.

Leap of faith — note the fine detail of this leaping horse carved by Imnaha artist, Ken Hunt, a master of a number of art forms.

It’s easy to read about the works and ideas of Leonardo Da Vinci and wonder whatever happened to men or women with that degree of talent in so many fields. Just because we don’t know about them doesn’t mean they don’t exist.

Case in point: Ken Hunt of Imnaha. The Chieftain became aware of Hunt and his talents through a rocking chair in Wallowa County Commissioner, Todd Nash’s, office. The rocking chair, one of Hunt’s creations, is a marvel of comfort and functional art.

The chair is beautiful, crafted from walnut, maple and ash. Also, the chair is held together entirely by stellar joinery — no fasteners such as nails, screws, etc. Not only that, the exposed joinery shows not a hint of gap — both mortise and tenon are virtually perfect and likely everlasting, at least unless the wood rots.

Upon making contact with Hunt, viewing photos of his work online and visiting his Imnaha home where he lives with his wife, Maggie, Hunt astounded the Chieftain with the breadth of his art, which covers a number of genres, including wood and leather carving (along with saddlemaking) rawhide braiding, painting, furniture making and sculpting both wood and stone.

What’s so interesting about his art is that all of it is done with expertise and caring. Each piece exemplifies pure dedication to excellence, no matter which medium he works in. And even those pieces meant for everyday use evoke thought or contemplation of the work.

Hunt didn’t start woodworking until he was about 20 and by the time he was 21 or 22, he was carving wood and making things from wood and stone, along with leatherwork and rawhide braiding. He said it’s about all he’s done.

“I’ve been making things my whole life, and it’s virtually been my only employment since I was 22,” he said.

As a teenager, Hunt ran away from home in California and went to Silverton, Oregon, where his sister lived.

“I quit high school because it made me crazy,” he said. “Once I got to Silverton, I needed to earn some money. I went straight to work in the woods.”

There, he set chokers or planted trees as well as doing carpentry and general labor work.

“I was learning about this whole group of people who worked with their hands and machines,” he said. “This was something I’d never been a part of in my life because my dad went to an office every day, and I was a suburban kid.”

“By the time I was 22 I was working for myself carving things,” he said. “I was of that generation of kids who focused on achieving a more natural lifestyle.”

With self-sufficiency in mind, the mountains in the Cascade Range called to him. His carving skills supplied the few dollars he needed to live, which he learned while working in a woodwork shop and making Christmas presents.

There, he designed and built a rocking horse for his sister’s children. His boss was so impressed with it that he commissioned Hunt to build more rocking animals. Then Pacific Gas and Electric hired him to make rocking animal carvings for its float.

“People made a big deal about it,” he said. “It was not a big deal, it was just a children’s float and they hired a tole painter to paint these swans and llamas and different animals I’d designed to rock.”

While exploring eastern Oregon in his 20s, he found Wallowa county and Imnaha. He felt drawn to the Imnaha area and hoped he could someday afford to move there. That happened while in his 40s. Hunt started carving with power tools or chain saws, which he sometimes still uses to rough in a project. Sometimes he goes straight into it with chisels. For 10 years he carved almost strictly with power tools for wood although all his marble carving was done by hand. Despite his success, braggadocio is not part of Hunt’s makeup and every statement of his work is spoken in a matter-of-fact manner.

“I did a bust for the state and did a couple of busts when I was in Salem, and I only knew how to carve stone by hand,” he said.

About 30 years ago he took on the project of carving the interior of a house. He resolved to complete the task with hand tools in order to accelerate his learning curve.

“I never learned about floral carving,” he said. “The floral motifs and interlocking leaves, the scroll work and engraving style work that many woodcarvers do or start there, I never bothered with or learned that. I went straight to carving figures and from that, I went to carving abstractions. I never learned decorative work until I started carving leather.”

As prolific as Hunt may seem from looking at the dozens of photos of his works, he indulges in down time as well.

“I need time to decompress,” he said. “I need time that’s, on the surface of it, not productive in order to go on with my life — it gets exhausting to be inside yourself that much.”

On occasion, the artist finds himself appreciating the more technical aspects of some of his creative pursuits.

“I am seduced by the technical problems presented by saddle and furniture making,” he said. “Because it demands attention, it’s not as difficult as trying to feel your way in the dark.”

Hunt said his painting art is just the opposite: “It’s all about feeling. Actually, feeling is at the core of everything I do.”