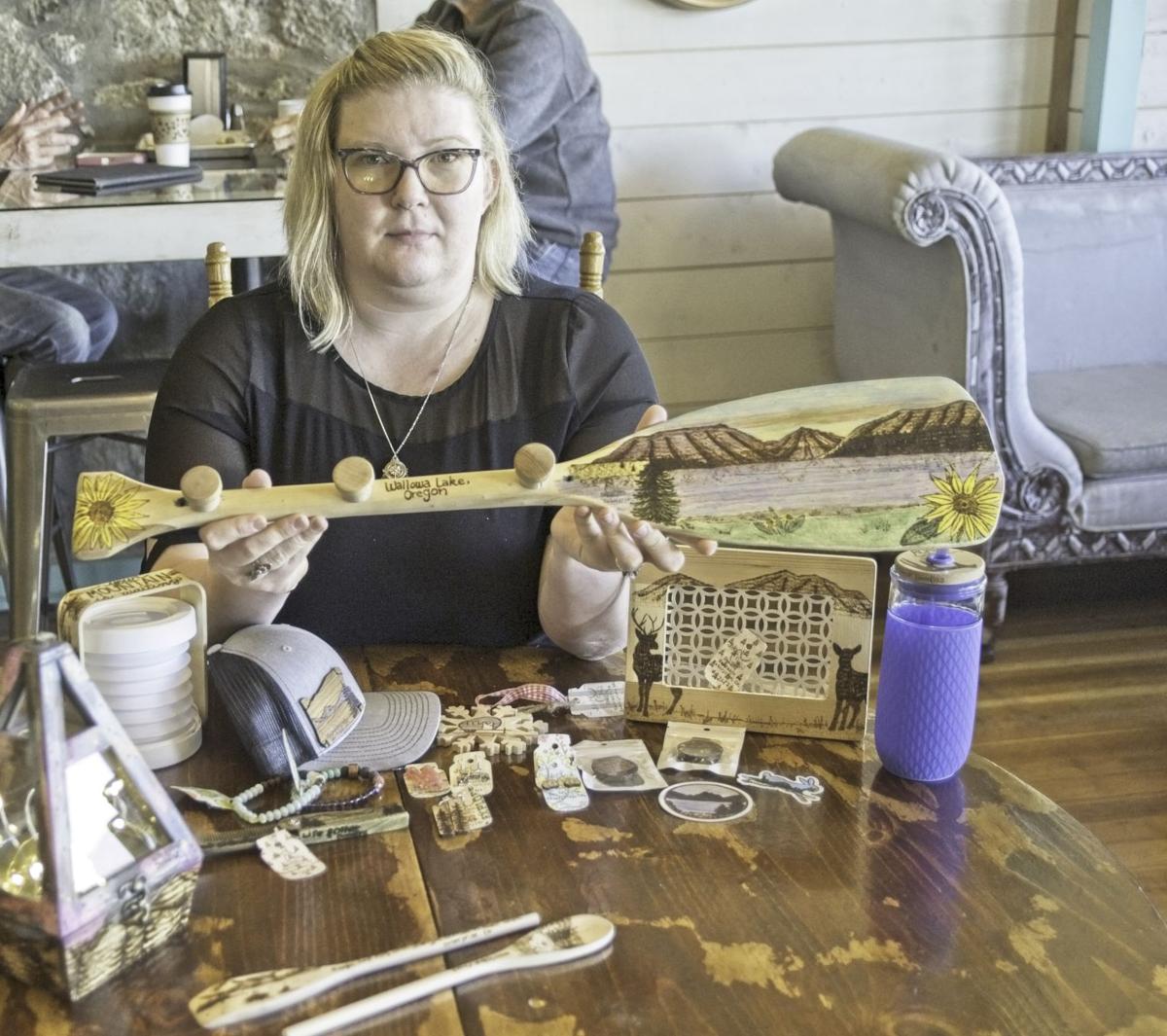 Pyrographer (woodburning artist) Erin De Long with just a few of her woodburning art pieces available for purchase. De Long has a number of other items available on her website and is eager to work with customers on custom designs. 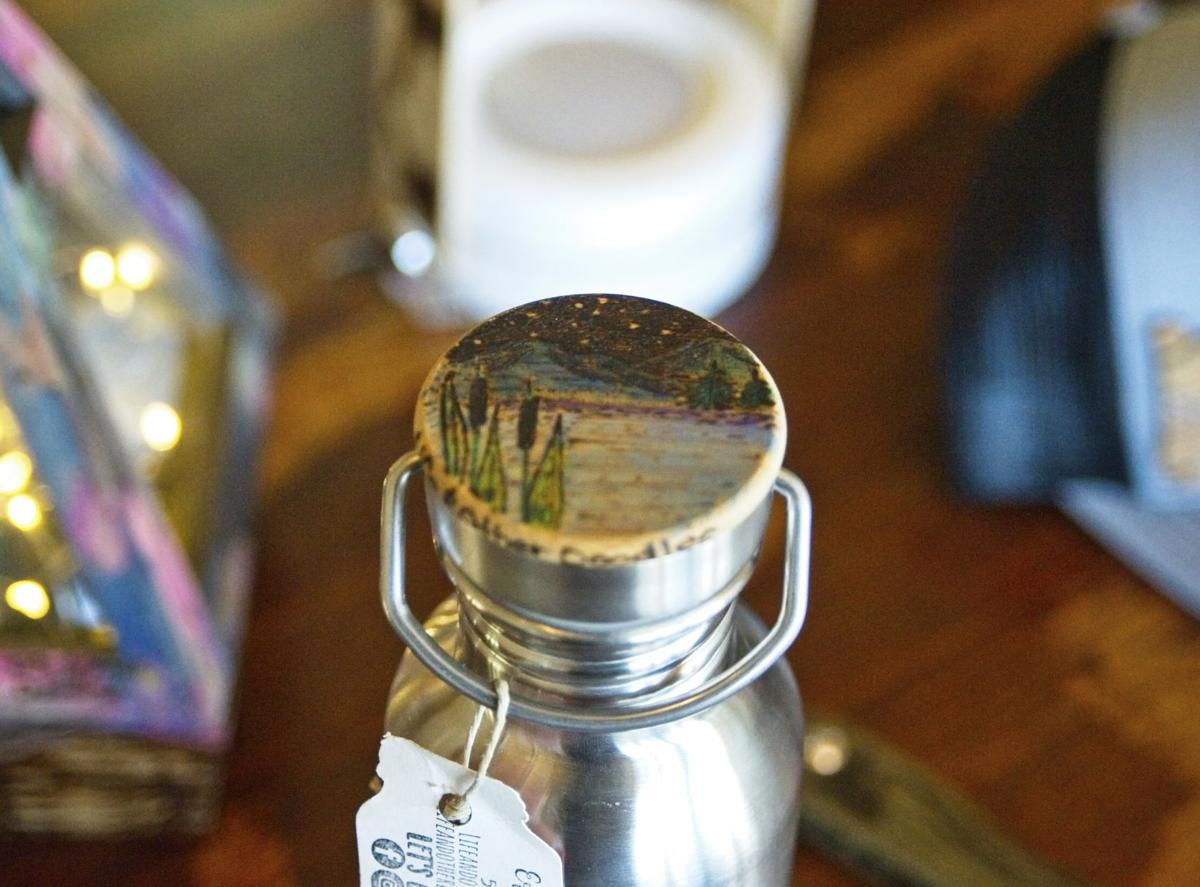 Even a bottle stopper is art if you have imagination. Note the exquisite detail of this piece produced by local woodburning artist, Erin De Long. 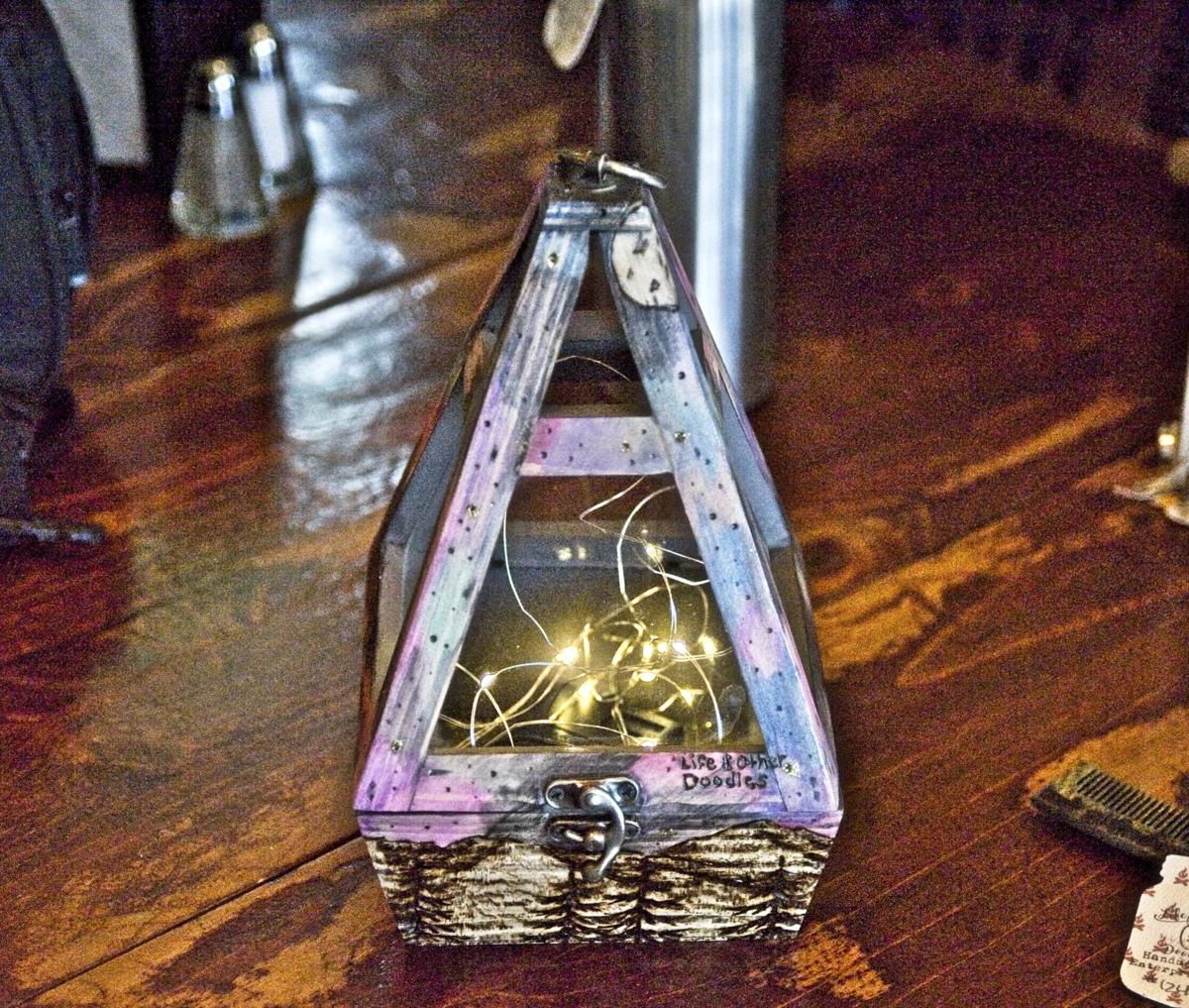 This little lamp is an idea that pyrographer Erin De Long came up with on a whim. 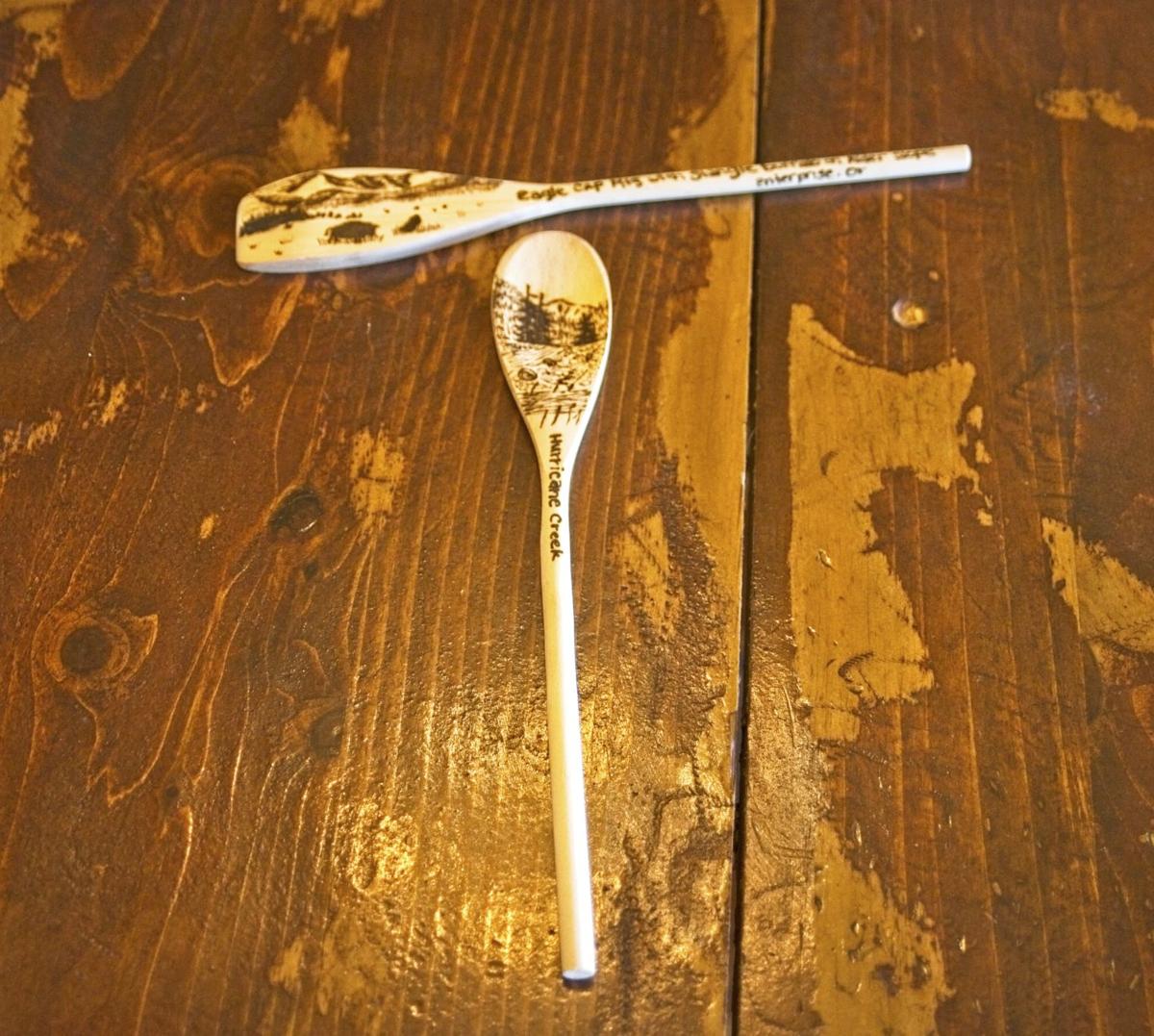 Pyrographer (woodburning artist) Erin De Long with just a few of her woodburning art pieces available for purchase. De Long has a number of other items available on her website and is eager to work with customers on custom designs.

Even a bottle stopper is art if you have imagination. Note the exquisite detail of this piece produced by local woodburning artist, Erin De Long.

This little lamp is an idea that pyrographer Erin De Long came up with on a whim.

Pyrography: n “the process of burning designs on wood, leather, etc., with a heated tool,” according to Dictionary.com.

As children, many of us tried our hand at this art form under the name wood burning, and quickly abandoned it.

Local artisan Erin De Long did the same in fifth grade. Now she’s turning it into a business. De Long is the proprietor of Life & Other Doodles, her pyrography business, which consists mainly of functional art inspired by the natural world of Wallowa County.

De Long, who was raised in La Grande, eventually traveled around the country before returning to Union County. Her fiance’ suggested a move to Wallowa County.

“We were dating for a while and he asked me if I wanted to move to Wallowa County,” she said. “That’s the thing that has inspired a bunch of creations, and my business and things like that.”

She re-started pyrography during the holiday season of 2017, creating wooden spoons for Christmas.

“They were horrible,” she said, laughing.

Asked why she chose pyrography, De Long said that she liked the look of the burning into the wood and remembered enjoying the process as a child. De Long graduated from spoons to small signs.

“I really love when the wood comes alive after you burn it,” she said. “You wouldn’t think that makes it come alive but it just does.”

De Long graduated from spoons to small signs, and as she gained more experience and confidence, she got more tools and refined her craft. She never took classes or even read books about the art.

“I just jumped full-steam ahead into it and figured it out as I went,” she said.

She bought her first tools at Joseph Hardware and found spoons at various craft stores and second-hand stores. People also gave her spoons to practice on.

The artist said it took about two months of practicing virtually every day to get to the point where she felt comfortable with her work. She started selling to the public in February of 2018.

Following spoons, she honed her craft on signs that formerly served as fence boards. That soon led to requests for product, which several Joseph stores now carry, including Copper Creek and Flannel Lantern. She’s also in talks with several other stores.

De Long doesn’t have a favorite piece she’s created because it changes.

Eschewing a laser cutter, De Long does virtually all her work by hand. She occasionally hires a shop with a laser to cut out some very small pieces, such as small earrings.

“If I got into mass production and I needed to pump out tons and tons of product, I don’t know how I would feel about that,” she said. “I like the individuality of each piece being slightly different.”

As an example, she recently completed a set of spoons for her brother’s wedding. Each had the same basic design but each still came out slightly different. The artist rarely uses patterns, but prefers to freehand each piece, which also lends to individuality.

“When I first started, I couldn’t do antlers to save my life, and now I can look at them and fit them into a space with freehand, “ De Long said. She added that bears can occasionally give her trouble.

De Long’s art isn’t restricted to wood. Paper and canvas also work well although wood is her favorite. She also doesn’t mind customer involvement in choosing how a piece is done.

“I’m pretty much up for anything,” she said. “If you come to me and say, ‘I pretty much like this idea, can we change it and make it into this,’ I’m all for it. I like challenging myself.”

Spread out on a table before her, De Long has dozens of items she’s inscribed with her special touch, many in exquisite detail. Included among her pieces are a mini lamp, water bottle stoppers, cutting boards, wooden spoons, earrings, etc, many that don’t spring immediately to mind when thinking of wood-burning. One is a small boat paddle that serves as a wall hanger and is exquisitely water-colored along with the pyrography.

“I like to challenge people’s thoughts and opinions about what wood-burning is and what it can be,” she said. “I love picking up crazy things and making them into something you wouldn’t expect.” For the winter, De Long will work on a bed frame, a desk and a stadium seat, among other things.

Along with juggling work, a fiance’ and step-children, De Long keeps her art at a high priority on her list. Asked how she finds the time, she said:

“I make the time. I’ve found with how my brain works and how I am, I have to be creative. When I’m not creative, that’s how other parts of my life become not as exciting — not as joyful.”

De Long’s business has a web page at lifeandotherdoodles.squarespace.com. The site has different tabs to purchase items, has photos of previous works that she plans to work on over the winter as she’s had professional photos taken of her works. She also plans to reformat it. She is also working on a blog which will explain what inspires different pieces. It also allows people to know when De Long is at a farmers market or other type of show.

For the moment, De Long works a full-time job, but she has hopes for her pyrography career.

“I joke that this is my other full-time job,” De Long said. “I’d like this to be my full-time job. I don’t think I’d like to go storefront; I’d rather be online supplying retailers. I enjoy when businesses reach out to me and say, ‘I really like your stuff. What can you make for our store?’”