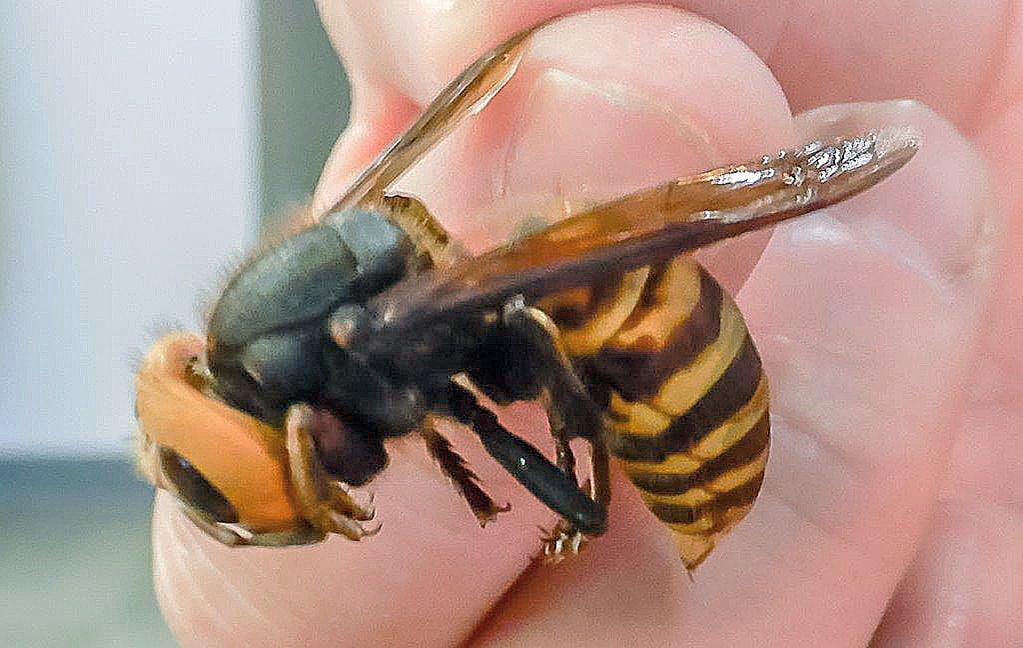 An Asian giant hornet in a hand. 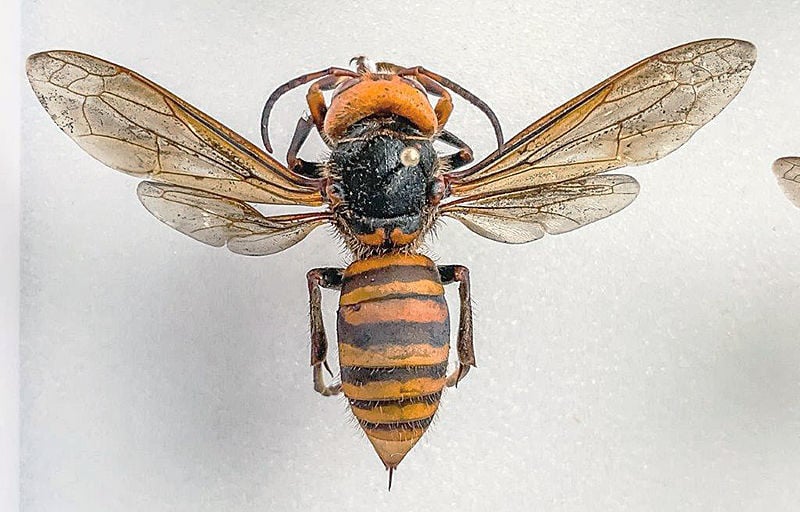 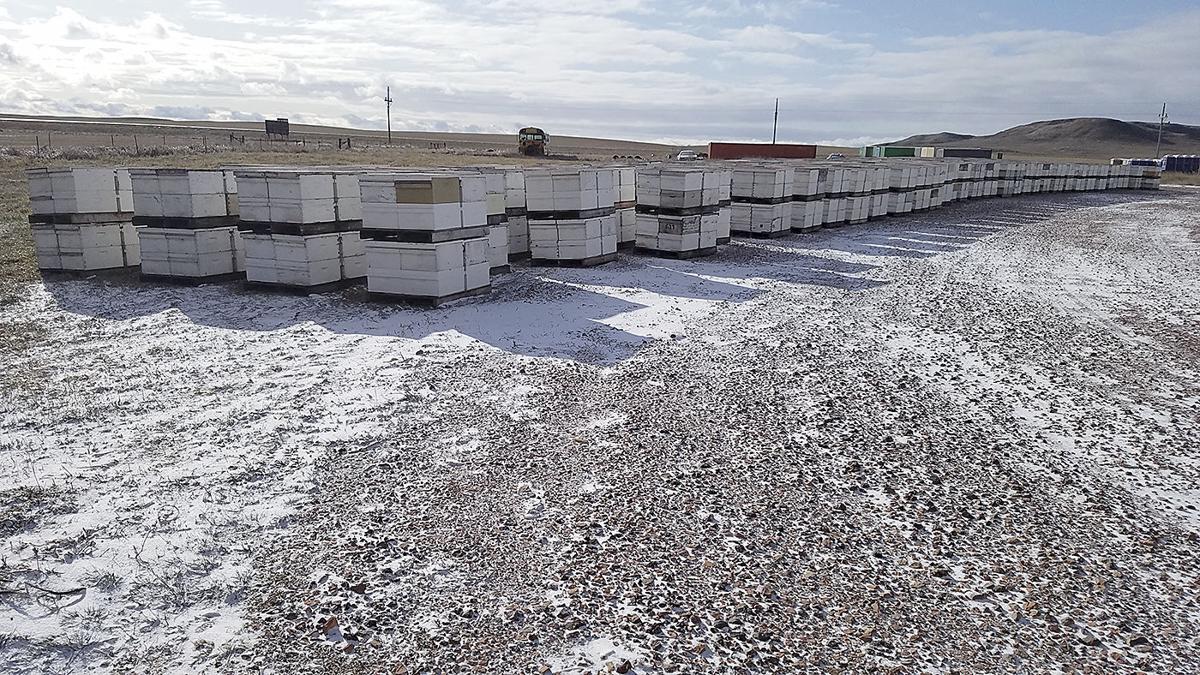 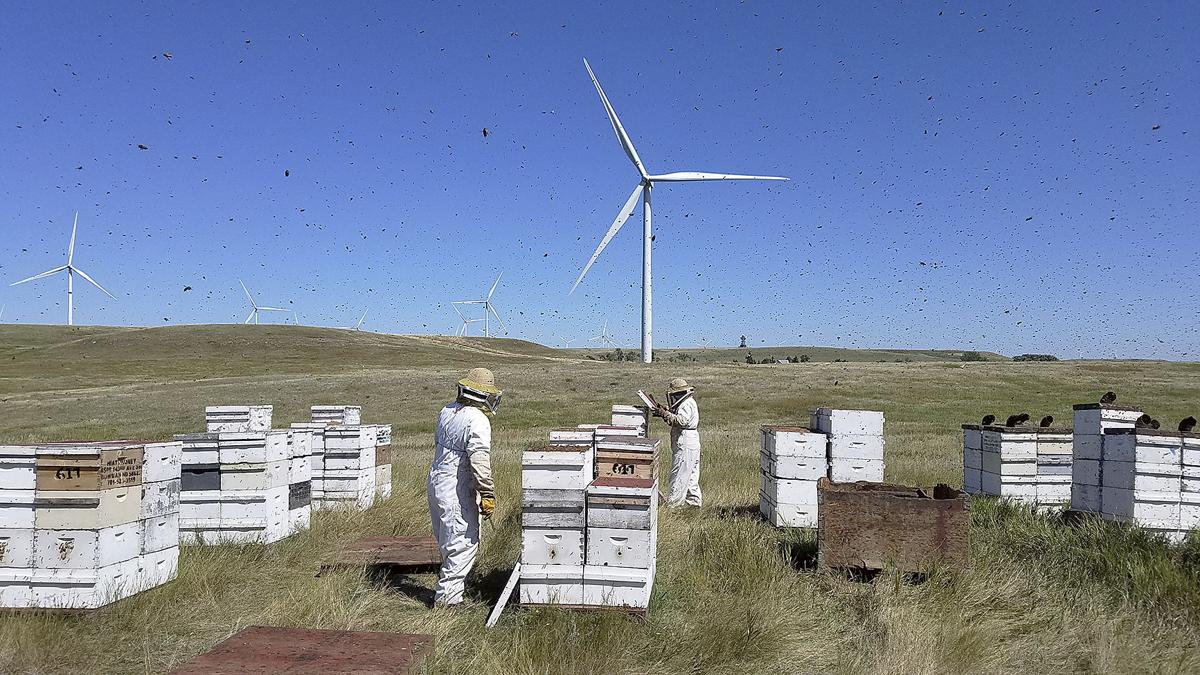 An Asian giant hornet in a hand.

BLAINE, Wash. — As if life wasn’t hard enough for the honeybee, things just got worse with the appearance of a new hornet that can decimate hives.

While honeybees in North America face many foes such as lethal varroa mites, a new nemesis buzzed onto the scene in Washington state — an invasive species capable of decimating honeybee populations, reducing crop pollination and stinging humans.

The pest is the Asian giant hornet. According to entomologists, it is indigenous to Asia, where it has many names: commander wasp, yak-killer hornet and tiger head bee.

The hornets are distinguishable by their yellow heads, long bodies and three-inch wingspans.

The hornets prey on other insects, feeding pulped bugs to their larvae.

Where similar species of hornets are established in Europe, they have wiped out 30% of beehives, reduced honey production by two-thirds and dramatically slashed crop production due to lack of pollination, according to Washington State Department of Agriculture public engagement specialist Karla Salp.

A typical Asian giant hornet is five times the size of a honeybee and can kill up to 40 bees per minute, according to Tim Hiatt, commercial beekeeper and a member of the Washington State Beekeepers Association.

“No one knows what triggers it, but sometimes they literally go into slaughter phase, decapitating bee after bee and eating their bodies,” said Salp. “It takes 20 hornets to kill an entire hive in one to six hours.”

The first Asian giant hornet sightings recorded in the U.S. were Dec. 8 by a resident of Blaine, Wash., just south of the state’s border with Canada. They had previously been confirmed at three sites in British Columbia.

Since then, WSDA has received 80 new sighting reports, three of which they deem probable. One was from a Bellingham beekeeper.

“Since these hornets are normally dormant in the winter, it’s unusual to find them active this time of year,” said Salp. “It’s probably because the winters are milder here, so they’re surviving better. It seems the Pacific Northwest is their ideal environment.”

All it takes to establish a new colony is one mated female, said Salp. And to invade a new location, a queen hornet just needs to do a little hitchhiking.

At the border, California Border Protection Stations, or as Hiatt calls them, “bug stations,” inspect for pests. In summer, finding stowaway hornets would be easy, said Hiatt. But in winter, when hornets are dormant, finding one tucked inside a pallet is nearly impossible.

Experts say it will take everyone working together to stop the spread.

“This is a good citizen-scientist moment,” said Laura Lavine, chair of Washington State University’s entomology department. “Everyone can pitch in.”

If you’re a beekeeper

According to entomologists, Asian honeybees have developed natural defense instincts. When a hornet invades, honeybees clump together around the invader in tens or hundreds, creating a giant ball and suffocating their attacker.

North American honeybees, said Salp, appear not to have this instinct.

“I think there’s a need for panic,” said Lavine. “I’ve heard anecdotes of beekeepers in Asia standing around with badminton rackets, smacking the hornets to the ground and stomping them. I know that sounds totally insane, but that’s what it can come to.”

Hobby beekeepers, said Hiatt, should consider putting a so-called robbing screen, which hornets can’t enter but bees learn to navigate through, in front of beehives.

Robbing screens, however, aren’t feasible for commercial-size operations. Hiatt suggests all beekeepers restrict the entrance size of hives, making it harder for hornets to enter.

If you’re a farmer

Farmers, Hiatt said, should watch for the hornets, which nest in the ground.

However, he warned against flushing out any ground nest indiscriminately. He said some native bees nest in the ground — many of which pollinate crops, especially alfalfa.

Experts say everyone should be alert — especially in port cities, where there is ongoing trade with Asia.

If you think you’ve found an Asian giant hornet, report it immediately to WSDA’s pest program via email at pestprogram@agr.wa.gov. Send a photo if possible.

Put safety first. In Asia, according to Salp, dozens of people die annually from stumbling into hornet nests. If you get stung and have an allergic reaction, call 911 and get medical help.