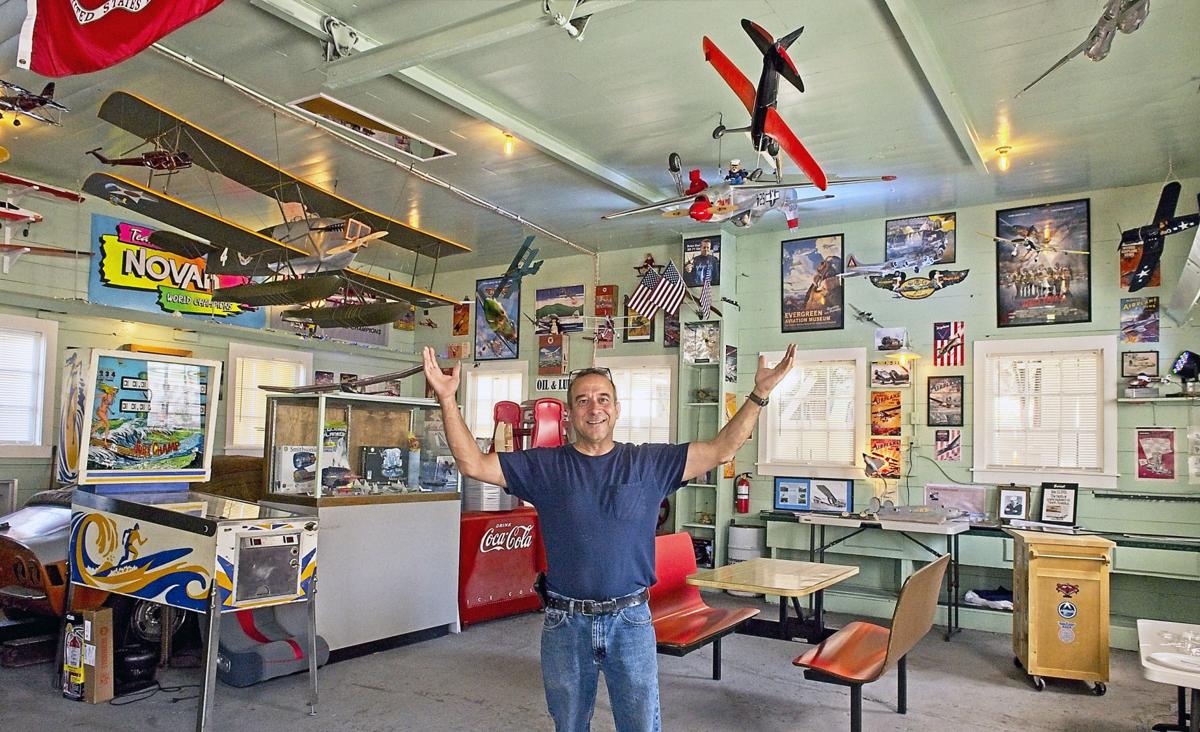 Laureano Mier’s new museum of flight history in Wallowa offers a fun and eclectic introduction to airplanes and their history, including activities for children of all ages. 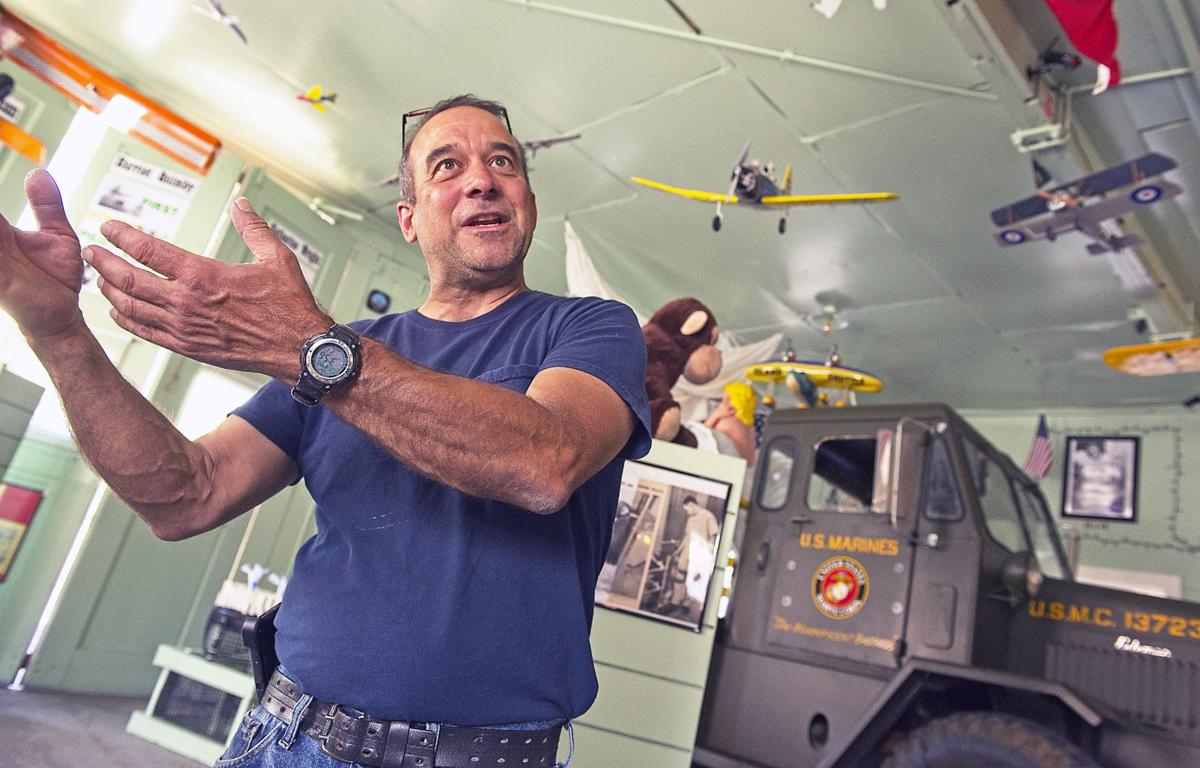 Laureano Mier talks about some of the activities available in Melincko’s Air Museum, which also includes U.S. Marine Corps memorabilia. 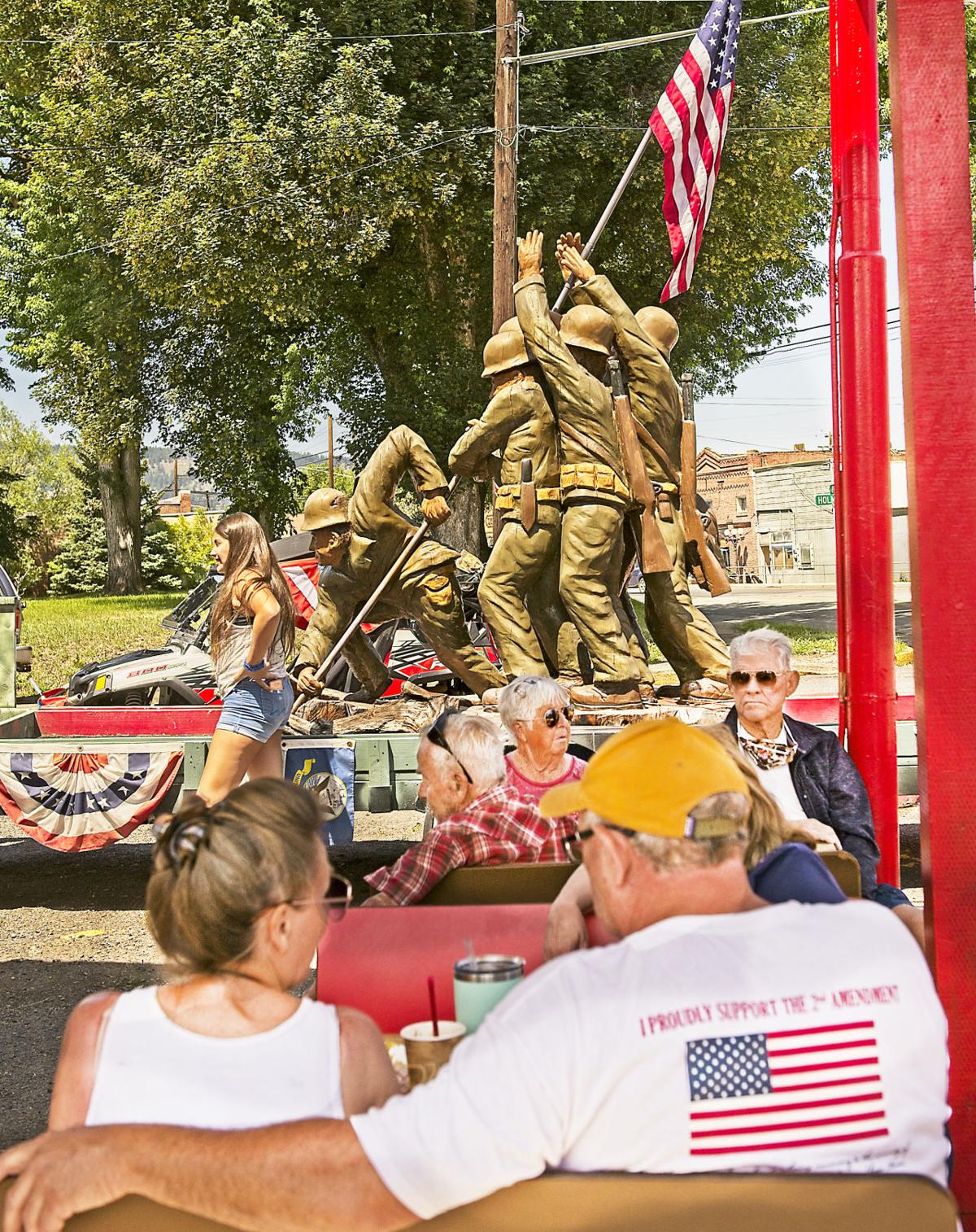 Diners at the cafe enjoy milkshakes, hot dogs, and coffee while admiring he wooden sculpture of Marines (and one Navy corpsman) raising the flag on Iwo Jima in February, 1945.The sculpture belonged to legendary Marine Gunny Brandon and among then eclectic displays in Mier’s air museum.

Laureano Mier’s new museum of flight history in Wallowa offers a fun and eclectic introduction to airplanes and their history, including activities for children of all ages.

Laureano Mier talks about some of the activities available in Melincko’s Air Museum, which also includes U.S. Marine Corps memorabilia.

Diners at the cafe enjoy milkshakes, hot dogs, and coffee while admiring he wooden sculpture of Marines (and one Navy corpsman) raising the flag on Iwo Jima in February, 1945.The sculpture belonged to legendary Marine Gunny Brandon and among then eclectic displays in Mier’s air museum.

WALLOWA — There may not be an airport in Wallowa, but there’s now a museum of aviation history that includes plenty of facts, whimsy and fun, along with a new café offering tasty summer fare.

Laureano Mier opened his new digs, Melincko’s Air Museum, and its companion, Melinko’s Café, on Friday, July 3. Both are painted an eye-catching yellow and red on the east end of Wallowa. The name comes from a toy monkey that has been carried by aviators on a number of globe-circling flights.

“The whole idea,” Mier said, “was to create a family environment where we can have ‘fun and zany’ all in the same place. It’s important for kids to have fun first to become engaged in an educational environment.”

Mier, who fell in love with airplanes and flying at age 8, was the educational director for the Evergreen Air Museum in McMinnville, and also directed the museum at Pearson Air Museum in Vancouver, Wash. His new museum endeavor evidences the same enthusiasm for eclectic aviation history that was evident in the McMinnville and Vancouver museums.

Mier brings an encyclopedic knowledge of, and boundless enthusiasm for, aviation history to his new endeavor.

“The reason these buildings are painted yellow and red goes back to the Gilmore gas stations,” he said. “Gilmore was actually a lion — a flying lion. In the 1930s, Roscoe Turner (who owned the stations) embodied the golden age of aviation with his mustache, tall boots and breeches and his pilot wings. He flew with a lion, whose name was Gilmore, until the lion weighed 150 pounds. Gilmore the lion flew 25,000 miles and participated in two transcontinental races,” Mier said. “The lion had his own parachute custom-built by the Irvine Parachute Co.”

Museum visitors are greeted by Gilmore — in this case, a large toy lion — along with information about his life and adventures.

To Mier, the most compelling information in Melincko’s Museum is the contribution of women to the history of flight.

“The Wright Brothers would never have gotten off the ground without their sister’s support and encouragement,” he said.

The museum’s walls are lined with tributes to pioneering women aviators.

There’s a display about Ham, the first chimp in space.

“At the Smithsonian,” Mier said, “they have a drawer you can pull out and see Ham’s actual bones. But I wanted his memory to be more of a living, happy presence.”

So visitors will find information about the “space chimp,” including a photo of Ham sporting a N.Y. Times front page that says “Space Chimp Survives.” There was evidently some considerable doubt he would return alive when he was shot into space in a trial run for John Glenn’s first manned flight.

There are lots of hands-on activities to help youngsters learn about flight.

“You start by building a model plane, maybe a glider,” Mier said. “Then you move into powered models. Then you learn the parts of a plane and that the ailerons on the model’s wings do the same thing as on a real airplane. First thing you know, you want to fly the real thing,” he said.

He added that presently there are about 20,000 job openings in the airline industry and other flight-related occupations. He’s hoping to work with the schools in Wallowa to develop aviation-related educational activities.

But for some visitors, the best part of Melincko’s will be the café — a place with outdoor seating and a drive-through, that is perfect for this summer’s social-distancing precautions. For now, the menu is somewhat limited and features ice cream, milk shakes and hot dogs. But it’s perfect summer fare, and a great way to cap off a tour of Wallowa County’s newest fun endeavor.