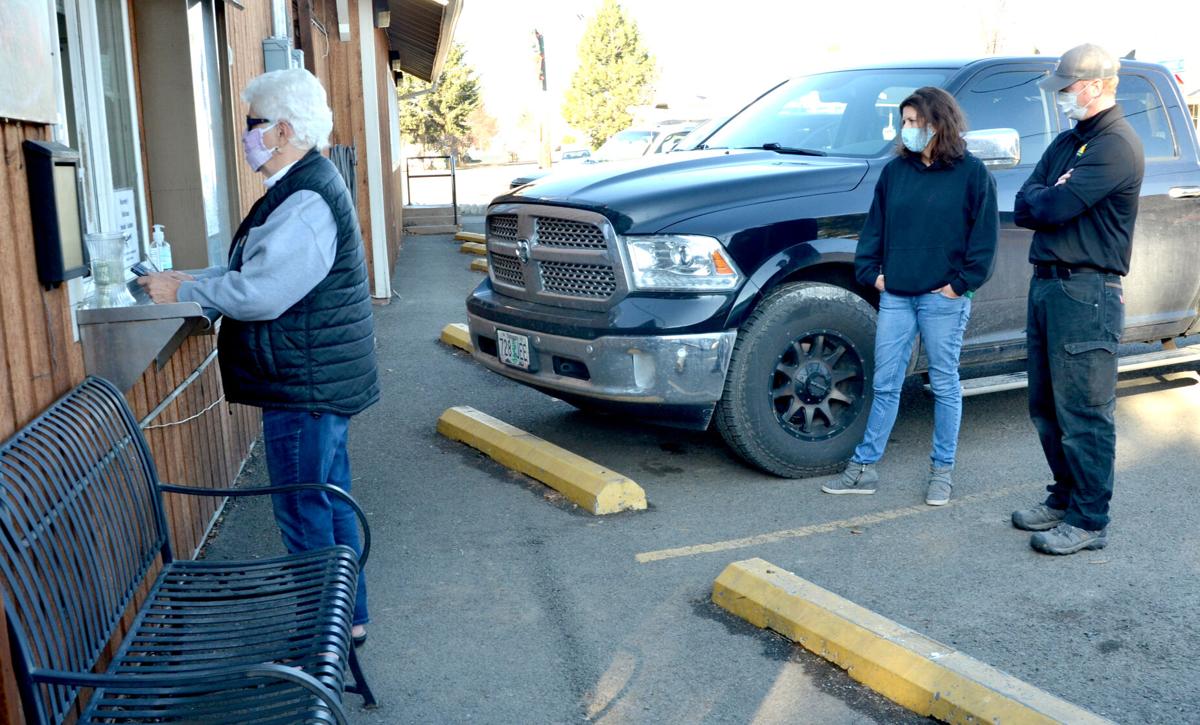 Sandra Johnson, left, of Wallowa, awaits her order at Heavenly’s Restaurant’s takeout window in Enterprise while Rachel and Ryan Sorensen, of Pendleton, await their turn Friday, Nov. 20, 2020. Heavenly’s is one business that has managed to keep going despite the governor’s mandated freeze on gatherings. 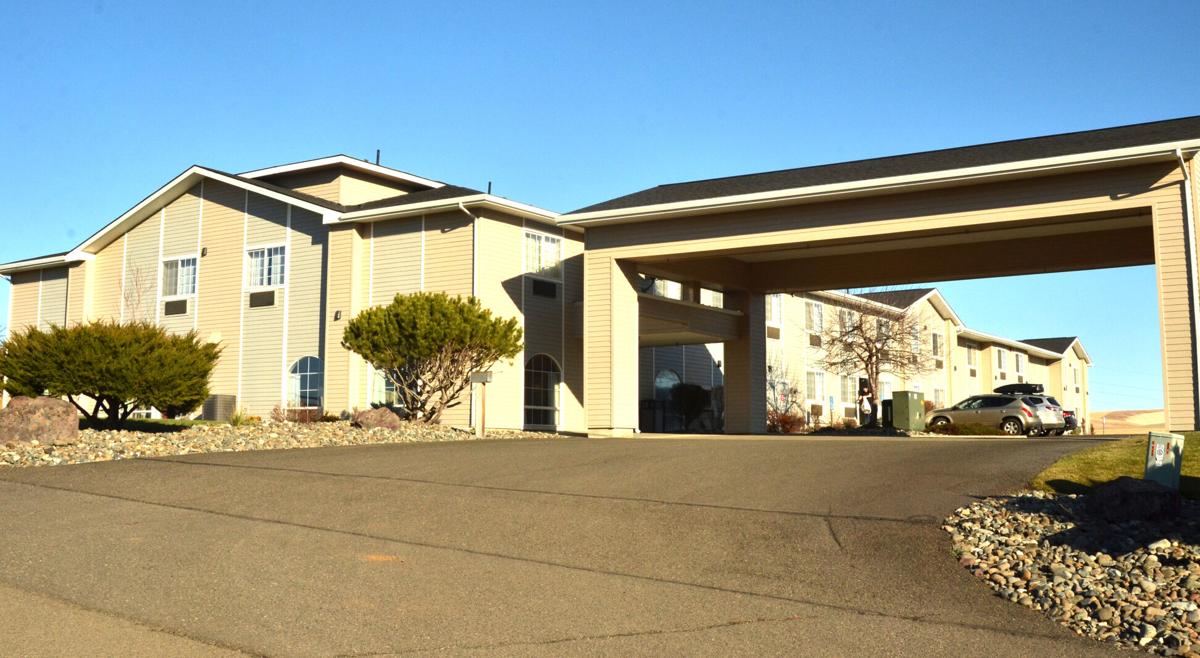 The customer cars are few at Eagle’s View Inn and Suites on the hill above Enterprise’s west end. Owner David Hurley said last week he was already feeling the pinch from Gov. Kate Brown’s “two-week freeze” on gatherings and had reservations cancel. 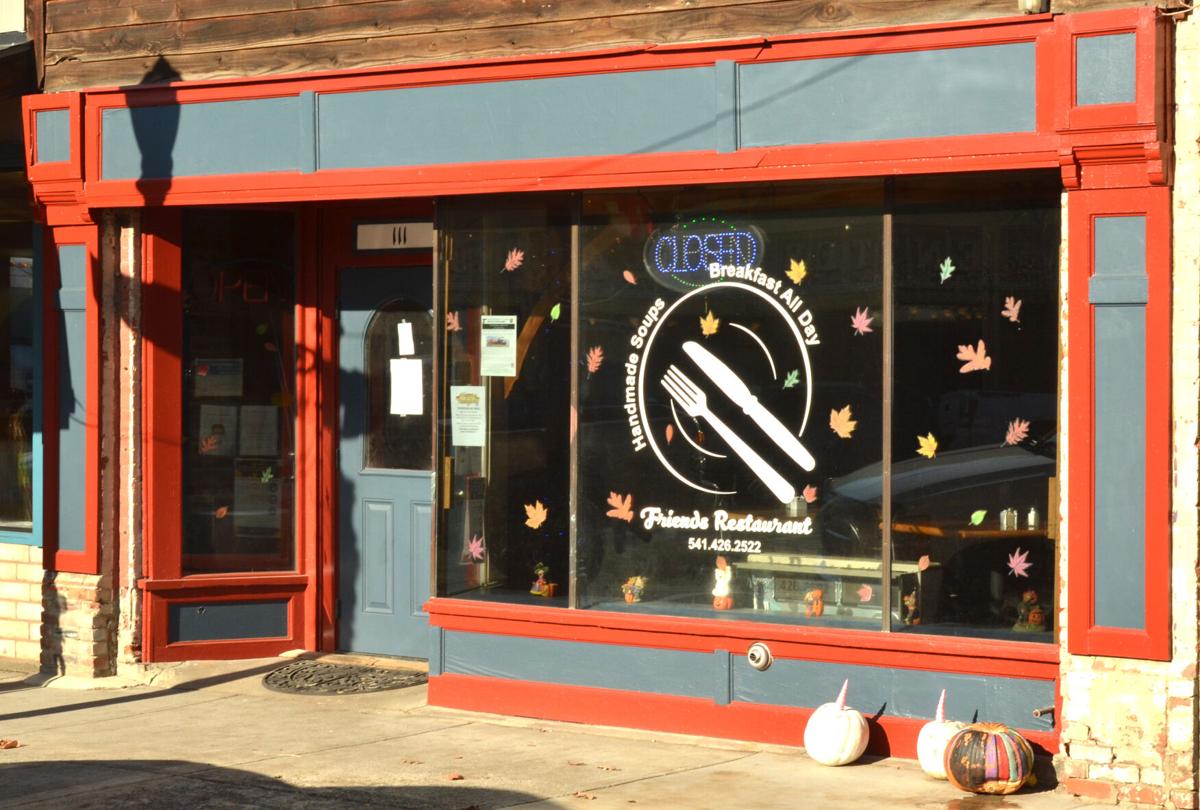 Friends Restaurant, on Main Street in Enterprise, has been limited to takeout due to Gov. Kate Brown’s “freeze” on gatherings and business activity.

Sandra Johnson, left, of Wallowa, awaits her order at Heavenly’s Restaurant’s takeout window in Enterprise while Rachel and Ryan Sorensen, of Pendleton, await their turn Friday, Nov. 20, 2020. Heavenly’s is one business that has managed to keep going despite the governor’s mandated freeze on gatherings.

The customer cars are few at Eagle’s View Inn and Suites on the hill above Enterprise’s west end. Owner David Hurley said last week he was already feeling the pinch from Gov. Kate Brown’s “two-week freeze” on gatherings and had reservations cancel.

Friends Restaurant, on Main Street in Enterprise, has been limited to takeout due to Gov. Kate Brown’s “freeze” on gatherings and business activity.

ENTERPRISE — Gov. Kate Brown’s recent executive order mandating a “two-week freeze” on gatherings to slow the spread of COVID-19 is having a decidedly negative effect on businesses in Wallowa County.

Dave Hurley, of the Wallowa Lake Tourism Association and owner of Eagle’s View Inn & Suites in Enterprise, already has noticed the effect the freeze is having on business.

“We’ve had a number of cancellations since this freeze started,” he said Wednesday, Nov. 18, the first day of the freeze. “Things have slowed down. We were on track for a record November, and now I’m not sure how that’ll turn out.”

The freeze was announced the previous week.

Hurley said he’s had about 10 cancellations so far, and he’s been keeping track of reasons potential customers have canceled.

He told of two in recent days: one canceled because a wedding that had been planned was postponed, and the other was a businessman who had been directed to work from home so he’s not making his quarterly trip to Wallowa County.

Overall, Hurley said the effect on tourism shouldn’t be great because the tourism season is largely over.

“This time of year, the effect will be somewhat minimal, because it’s usually slower,” he said. “But what you can’t count are the (reservations) that aren’t being made.”

He said the timing of the freeze also is hurting.

“Coming right over the Thanksgiving holiday — we typically get a few more then,” he said.

Leo Arenas, co-owner of El Bajío Mexican restaurant in Enterprise, said most of his business in recent weeks has been takeout, so there won’t be a lot of change.

Arenas said that early in the pandemic with the first shutdowns he and wife, Audra, were forced to lay off all their employees and run the operation themselves. But the two have kept it going and expect to survive this challenge like they have others.

“I think everybody is going to be OK,” Arenas said.

At the Stubborn Mule, in Joseph, bartender Nicole Brookshire said the freeze eliminates their ability to sell hard drinks, since all orders are takeout. However, their liquor license allows the sale of beer to go. But food is still their mainstay, she said.

“We sell lots of food,” she said. “It’s definitely going to hurt. In addition to food, we can sell beer to go. But no hard drinks.”

Another motel dealing with the freeze is Mountain View Motel and RV Park between Enterprise and Joseph. But owner Scott Hathorn said he hasn’t been hurt by it so far.

“It was a very different year because of the anxiety and uncertainty people are feeling,” Hathorn said. “But we live in a special place here. People don’t commute with other people. … A lot of us do physical work and that amps up the metabolism. … We’re blessed to live here as opposed to Portland or places where people are all cooped up.”

While some in the tourism business were concerned earlier this year the pandemic-related closures would devastate their businesses, Hathorn saw an uptick.

“It was really interesting this year,” he said. “I was hoping it would curtail some of the tourism. But a lot of the clientele were urban escapees from Portland or wherever.”

At Heavenly’s in Enterprise, owner Cindy Ellis said the business will take a hit as it gets moved to takeout.

“Of course, people don’t want to eat outside right now and we have outdoor dining right now,” she said. “It’s not the peak of tourism. Everything is different from when they had the close and shutdown prior to this. It makes a big difference. We were able to survive a little easier. You had warmer weather.”

Ellis said that as long as the freeze is just two weeks, the business should maintain.

“I can hold my breath for two weeks,” she said.

She added that in that time, the key will be getting as many orders filled as possible.

“It’s a day-by-day thing a lot of times. You don’t know, if at some point everyone wants to eat out and the next day they don’t (eat out),” she said.

The first few days of the freeze were not easy for Friends Restaurant. Owner Bree Gladden said the business had taken in around $650 in orders per day in the weeks prior. But the first three days, with the business being relegated to just takeout, she was down to about $100 per day.

Gladden has temporarily laid off her staff of five, and is filling orders as they come in by phone. She should get a boost on Thanksgiving with the business set to deliver about 40 takeout Thanksgiving dinners Thursday.

“The one thing that I’m grateful for this time is that Thanksgiving is next week,” she said Friday, Nov. 20. “We had been planning a big Thanksgiving meal.”

Gladden admitted she is pessimistic about the prospect of the freeze lasting just two weeks, and thinks it could be in effect through the end of the year.

If it does last just the fortnight, though, she anticipates the restaurant will bounce back.

“I don’t feel like there is going to be too much long-term effect (if it’s just two weeks),” she said. “I have a pretty faithful local customer base. They were helpful last time.”

At Little Bear Drive-In in Wallowa, owner Rhonda Fuller said residents and customers have always come through for businesses during various economic ebbs and flows.

“When things get difficult, Wallowa County people show their strength, resilience and loyalty. I have been blessed by huge support from my home county,” she said. “So I guess it has strengthened my roots here with our loyal local customer base.”

She added she is confident local businesses will be able to endure via the takeout method.

“I think the businesses that are moving forward with takeout will be fine,” Fuller said. “Our community understands that it is the small business owners that donate to support so many of their children’s activities throughout the year and do not want to lose their favorites.”

Another place contacted, the Indian Lodge Motel, appears to be taking advantage of the freeze by getting some work done on the motel. A recording stated the motel is currently closed for renovation.

Others left recordings that they were simply closed for the duration of the freeze and will resume operations when it is lifted.

Others were not as forthcoming. Teresa Sajonia, owner of Embers Brewhouse and Pub in Joseph, said simply “I have no comment.” Embers remains open.