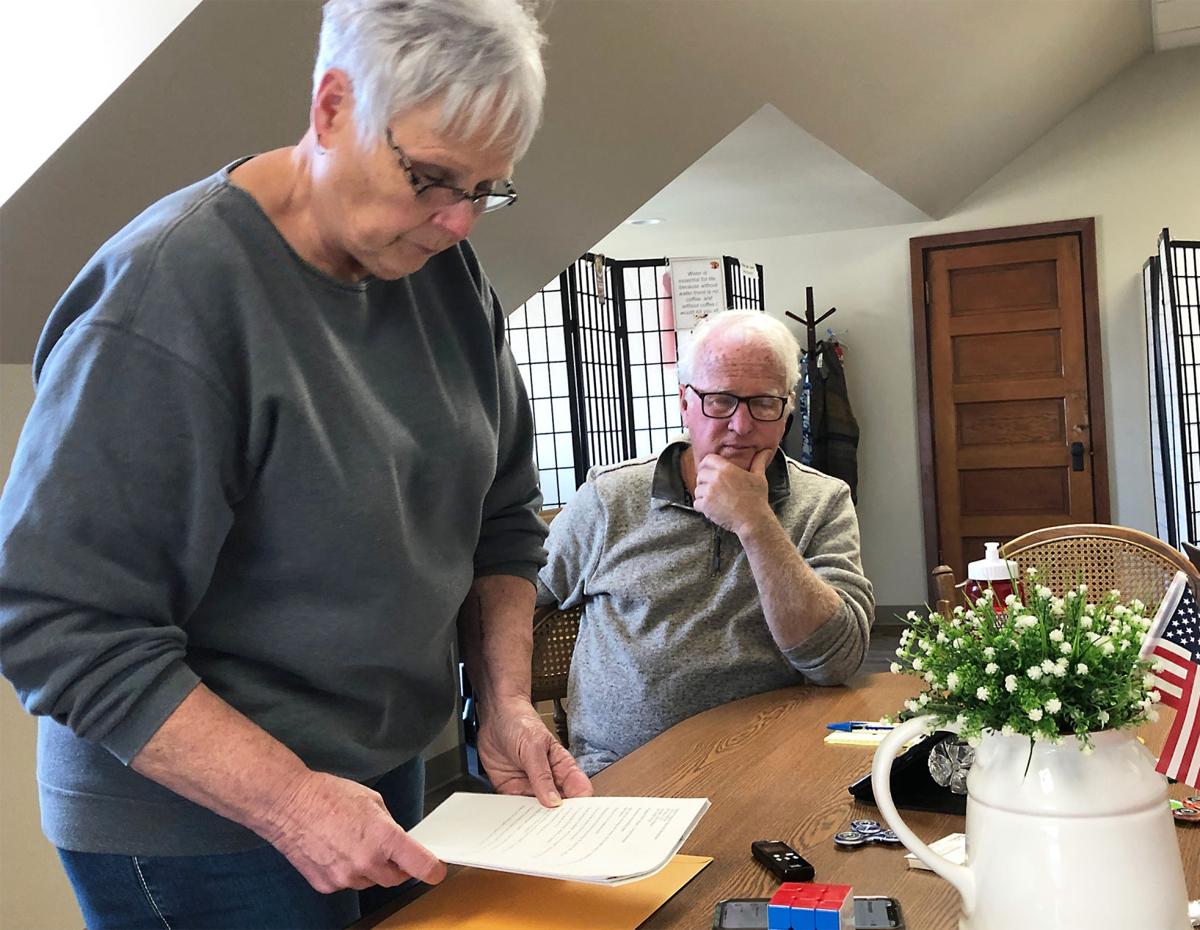 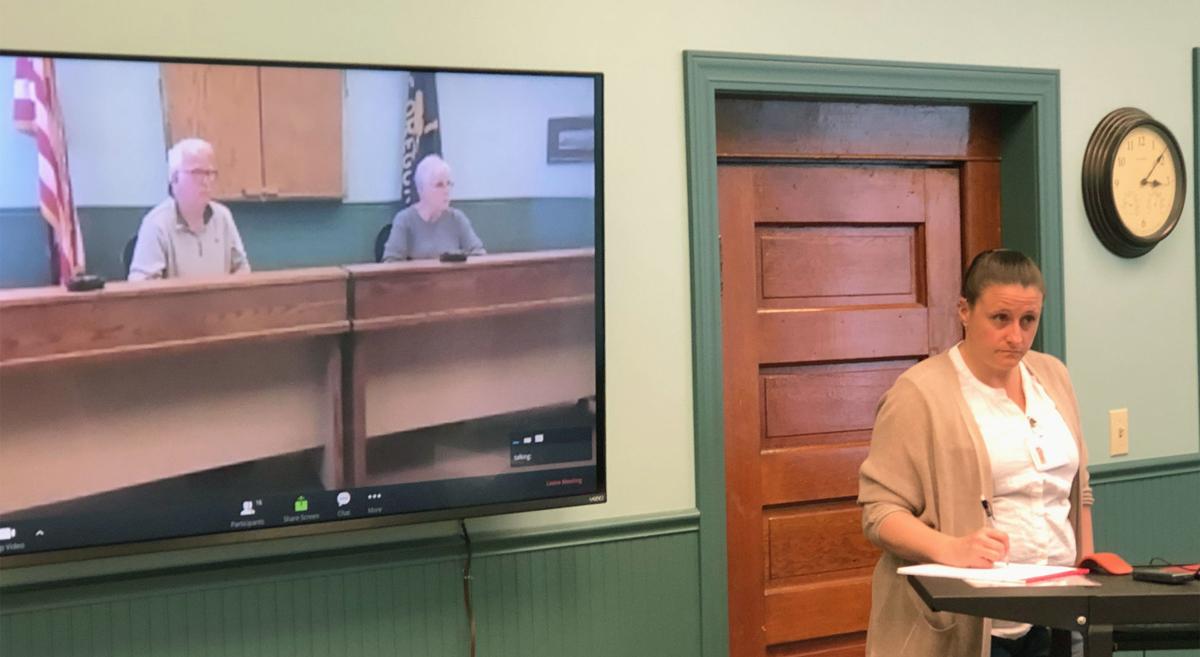 At a 3 p.m. emergency meeting hosted on-line, the three Wallowa County Commissioners voted unanimously to apply to open under Oregon’s Phase 1 guidelines as early as May 4. The guidelines provide rules for opening restaurants, bars, outdoor recreation businesses including outfitters, and others. Commissioner Todd Nash participated via a phone link from important work with his cattle. Commissioner’s Admin Assistant Stacey Fregulia (right) set up and ran the virtual meeting.

At a 3 p.m. emergency meeting hosted on-line, the three Wallowa County Commissioners voted unanimously to apply to open under Oregon’s Phase 1 guidelines as early as May 4. The guidelines provide rules for opening restaurants, bars, outdoor recreation businesses including outfitters, and others. Commissioner Todd Nash participated via a phone link from important work with his cattle. Commissioner’s Admin Assistant Stacey Fregulia (right) set up and ran the virtual meeting.

Late Friday afternoon Wallowa County applied to open select businesses under Oregon’s Phase 1 guidelines as early as May 4th. Realistically that opening, if approved, won’t happen until May 15 according to Gov. Kate Brown. But an earlier meeting of commissioners today with Brown, her staff and other officials cast doubt on whether events with more than 250 attendees would be allowed before the end of the summer.

Wallowa County Commissioners held an emergency “virtual” meeting at 3 p.m. Friday, after the conference with Brown, and unanimously approved submission of the application, which will be among the first of Oregon’s counties to apply for Phase 1 openings. More than 20 local businesses including restaurants and beauty parlors had submitted plans for opening as of 3:30 p.m. Friday.

The application details how businesses targeted for Phase 1 opening can meet the guidelines. Those businesses include restaurants, bars, child care, retail, outfitters and outdoor recreation. It also includes specifics on how hospitals will deal with surges, assurances that care providers will have a 14-day stock of PPE on hand at all times. At this point, it seems that Wallowa County can check all the boxes to qualify for a Phase 1 opening that would include recommended limits of 50 miles for travel, social distancing in retail shops and restaurants, and closure of restaurants and bars at 10 p.m. The final guidelines will be published next week, Brown said.

The meeting allowed commissioners to comment on and ask questions about the draft guidelines issued last week. The take-away included that it may be unlikely that large gatherings of more than 250 people will be allowed through the end of the summer, and that the governor’s office is reluctant to include opening of hair and beauty salons in Phase 1. Commissioners also expressed concern over ODFW’s allowance of out-of state hunting and fishing beginning May 5 and exactly how they would be able to show the required “downward trend” since many of the participating counties had few or no COVID-19 cases.

Brown was unsure whether personal services, such as hair salons and manicures, which allow fairly intimate contact, would be included. The governor’s staff seemed acquainted only with large hair and nail salons that seated a dozen or more clients simultaneously, but were unfamiliar with smaller rural businesses.

Commissioner Roberts responded that she had asked businesses in Wallowa County to provide opening plans, and some beauty parlors had provided plans for opening. “These shops out here are one or two people shops.”

The same concern was voiced by Morrow County Commissioner Melissa Lindsay who told of a beautician in Heppner who works with one or two customers at a time in their entire place. “She has a plan already written up on how she can isolate and keep her customers safe. The hard thing is that after I got off that phone call, I drove past Wal-Mart with a packed parking lot, and I stepped into Safeway—and walked right back out the door because it was absolutely packed. There was no way customers were maintaining the six-foot distancing. If we could phase it in for smaller shops, I really think that these parlors can do a good job of distancing. And protecting their client’s health.”

Wallowa County Commissioner Susan Roberts pleaded for a decision on Phase 1 opening sooner than May 15. “Lots of our restaurants have submitted plans,” she said. “But I just don’t know if they can make it for two more weeks. They are hanging on by a very thin thread.”

Roberts also asked for more specific information about allowing larger gatherings later in the summer, a concern shared by Umatilla County Commissioner George Murdock who asked pointedly “When can we get some specificity of gathering sizes? We are under some significant pressure to make decisions on upcoming events that require a lot of preplanning. These are multi-million dollar activities” he said, “and we’re getting a little nervous...” referring especially to the Pendleton Roundup.

Brown’s response, “We’re working on that and it’s on our radar screen. September is a ways off. The challenge for Oregon is to predict these things. We don’t have a sense of what will happen when we start to open. So we need to look at the science behind that. It will be a few days — a couple of weeks before we make a decision on that.”

“We and other communities out here have some important events coming up in July,” Roberts said.

“I know you don’t want to set a date, but what are we supposed to tell those folks?” she said. “They’ve got to be able to start working toward those events the first of June.”

Brown’s response: “Give us at least a week, please. I know it’s very frustrating both from emotional and economic standpoints. “ “ That economic is a big deal in eastern Oregon” Commissioner Hillock interjected.

Brown would not commit to any date allowing larger gatherings (presumably Phase 2) . “We aren’t controlling the timeline,” she said. “The disease controls it. But you all are doing a great job.”

Pat Allen, director of the Oregon Health Authority specifically said, “Listening to the discussion about large events … just to manage expectations I would tell you that from our standpoint, we think it’s extremely unlikely that we would be providing advice to the governor anytime this summer that very large events over 250 people are going to be a good idea. But,” he said, “ultimately that decision has not been made and the governor will have to give you the timeline for that. But that’s where I think we are from a health advice standpoint.”

Wasco County Commissioner Steve Kramer asked whether there was a hard date for approval of guidelines “…or will we just have to float along and see where it goes. “