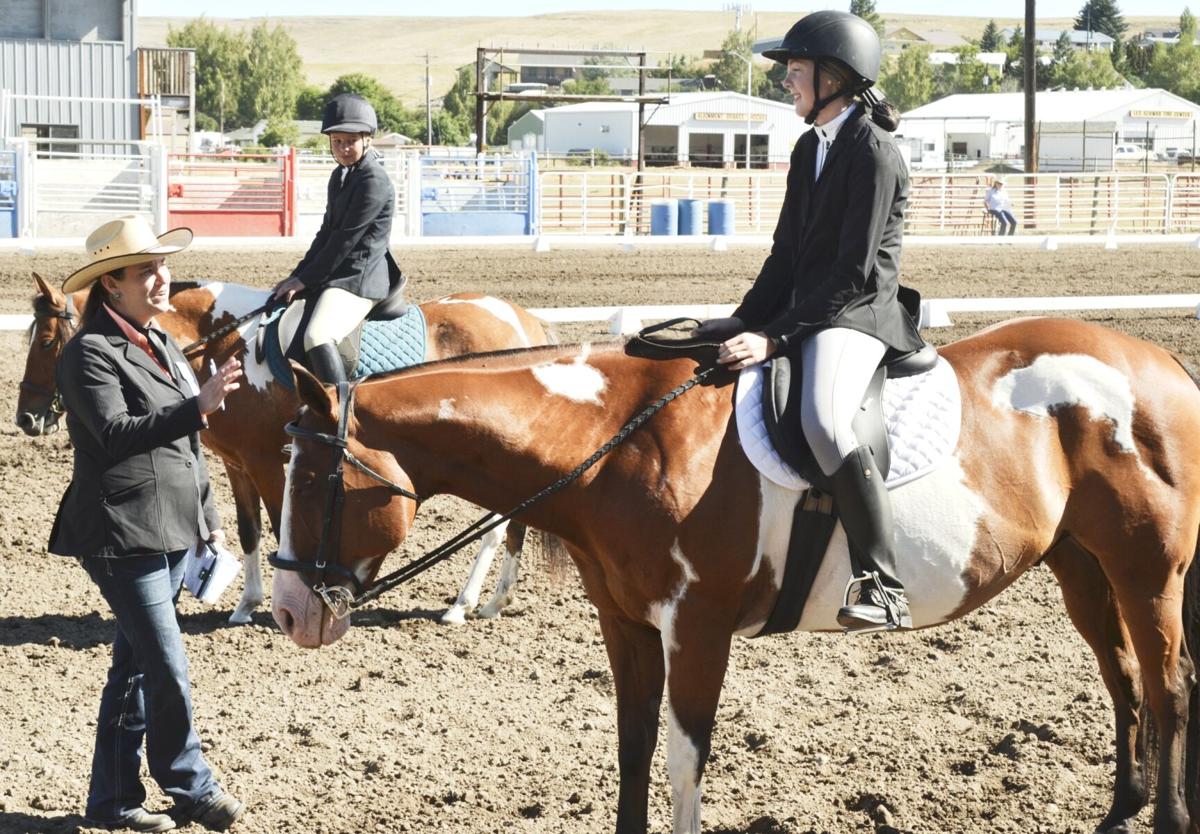 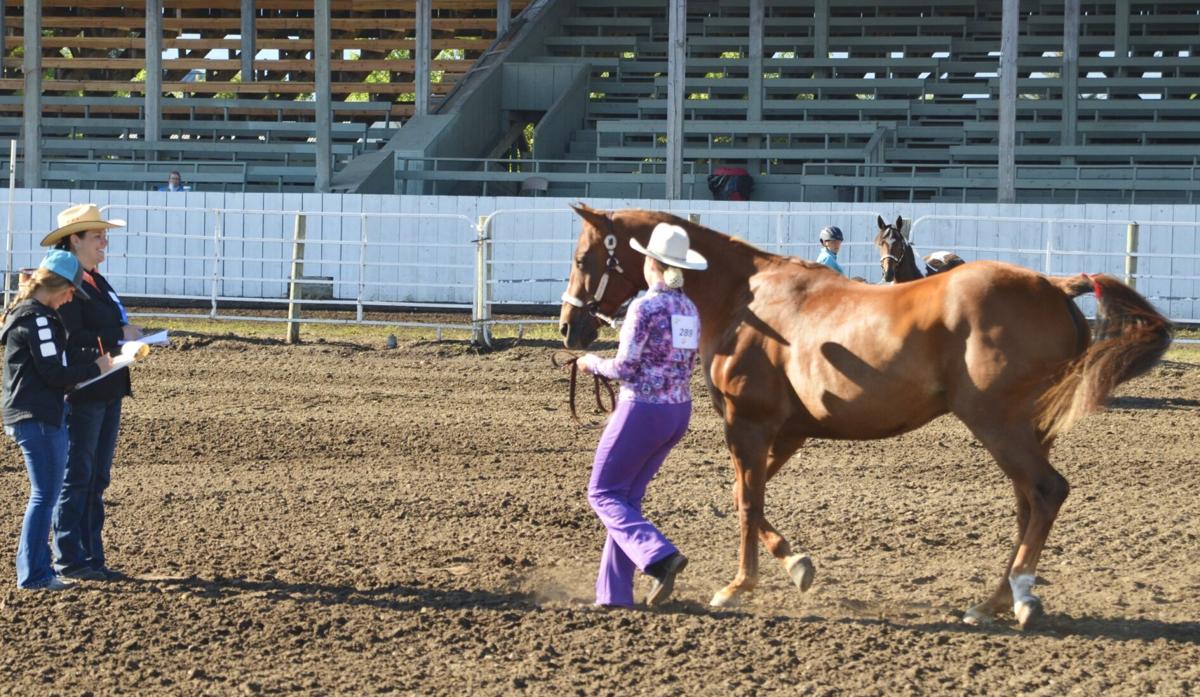 Bailey Vernam, of Enterprise, trots her horse up to the judge, Dr. Hope Flint, on Monday, Aug. 3, during the senior showmanship portion of the 4-H Horse Show at the Wallowa County Fair. 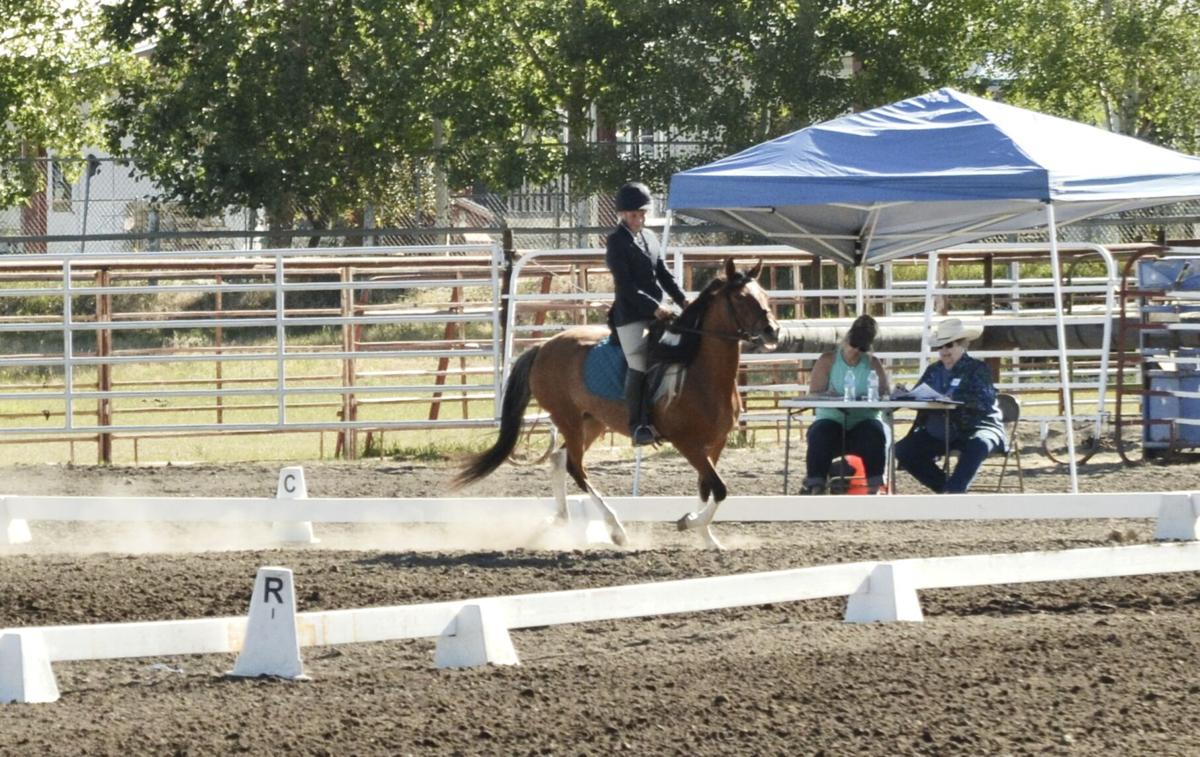 Carissa Yaw, of Enterprise, has her horse stir up some dust Monday, Aug. 3, as they round a corner during the dressage portion of the 4-H Horse Show at the Wallowa County Fair.

Bailey Vernam, of Enterprise, trots her horse up to the judge, Dr. Hope Flint, on Monday, Aug. 3, during the senior showmanship portion of the 4-H Horse Show at the Wallowa County Fair.

Carissa Yaw, of Enterprise, has her horse stir up some dust Monday, Aug. 3, as they round a corner during the dressage portion of the 4-H Horse Show at the Wallowa County Fair.

ENTERPRISE — Quantity doesn’t always equate to quality, as was evidenced this week with the youthful expertise in horsemanship on display during the 4-H Horse Show at the Wallowa County Fairgrounds.

“I think the kids who are here have done an amazing job,” said Brinda Stanley, fair board chairwoman. “We’re small numbers because of the kind of year it’s been, but I think the ones who are here are having a good time so far.”

Stanley said entries in the horse events were down by about half this year.

“We usually have in the upper 20s to lower 30s for the horse kids. This year it’s about 15” she said. “The clubs couldn’t meet because of the (COVID) restrictions, so the kids just didn’t get time with instructors. That, I think, is the main reason why we’re so low this year.”

Stanley said the youths who did enter were the real core of the county’s two horse 4-H clubs.

“I think the kids who are here have done an amazing job,” she said.

One of the visiting judges gave insights into what the contestants work for. Showmanship, the kick-off event Monday, Aug. 3, was largely about displaying the relationship a handler has developed with a horse.

“Showmanship is the basis for all their ground handling, so I want to make sure they are getting the best foundation on those horses so when they ride them, they can do all the things they need to do,” said Dr. Hope Flint, a veterinarian from the Portland area. “They need to be quiet horse people; they need to know how to use their bodies. I also look for easier things like smiling (at me) and looking up so they’re showing off all the hard work they’ve done with those horses.”

She also has the kids lead their horses on a routine: first, at trot up to the judge. Then, they back the horse up before having it turn a tight turn.

“Those tight turns are more important than most of the time they’re given credit for because the horse has to learn those turns on the ground so they don’t have to worry about it when they’re riding,” she said.

Flint’s work as a veterinarian comes into play as a horse show judge when she’s inspecting the horse.

“One of the things these kids have to do that’s particularly important to me as a veterinarian is that they learn this inspection, so when I walk around the horse, they have to move in a certain way so we always have to be on the same path of the horse,” Flint said. “If it was a bad horse or a naughty horse or it got scared, it means we’re going to be safer. … As a veterinarian, when I work with kids who know how to do that, everybody’s safer. It’s really nice, compared to working with somebody who doesn’t know where to stand.”

In addition to horsemanship, Flint also judges English equitation, reining and gaming. Equitation — there’s also Western equitation — is largely about horsemanship and how the rider handles himself and the horse.

“The horses don’t have to be so fancy,” she said. “We’re not judging the horse; we’re judging the rider and how good they get the horse to do what we’re asking them to do.”

The reining is about just that — how the horse and rider handle reined commands through a variety of obstacles.

Gaming is the timed events, such as barrel races, poles and flag racing, Flint said.

Coming from out of town, she was pleased to see how this small country fair was handling the restrictions that resulted from the pandemic.

“The Extension office up here, they’re smart about handling kids and how they’re doing a good job,” Flint said. “I’m so pleasantly surprised — you know, they’re not getting to meet and not getting to spend as much time with their trainers this summer as they would normally and they still did a great job. These guys must still have been practicing at home.”

She also does virtual judging, where she views a video of a competitor. That largely takes place in more populous counties that are unable to hold in-person competitions like in Wallowa County.

“This is much more powerful for these kids to do it in person,” she said. “It’s safer to do it here than it is down in the (Willamette) Valley. It’s really nice to be able to do it in person, to make eye contact and to talk to them. It’s better than just watching a video.”

Flint also believes the in-person competition has a greater value.

Stanley agreed that the ability to hold at least a portion of the traditional fair has great value.

The Chieftain will post complete results of the horse show online as soon as they come in.