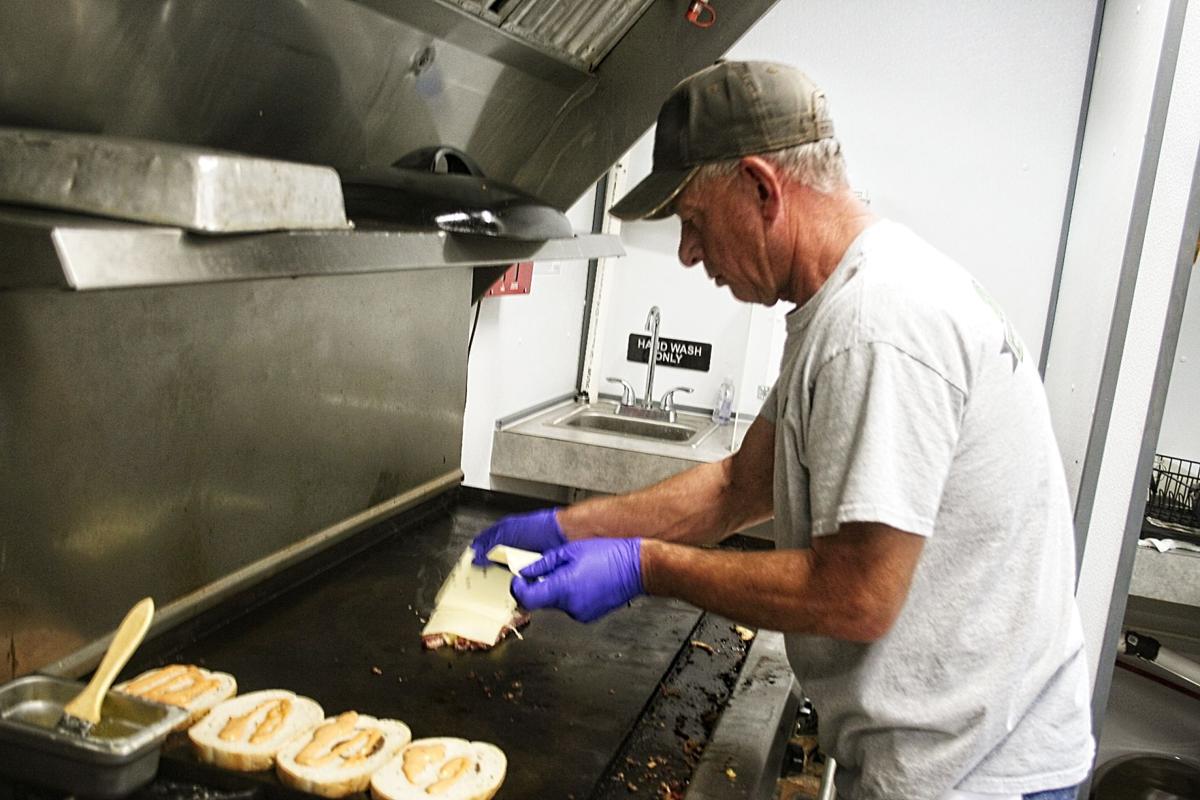 Jeff Brookshire, of Joseph, cooks a couple of reuben sandwiches at his new Brookshire Catering Services trailer that opened Sept. 24 on Second Street just off West North Street in Enterprise. At present, he’s open for breakfast and lunch, Monday through Friday, but has plans to expand. 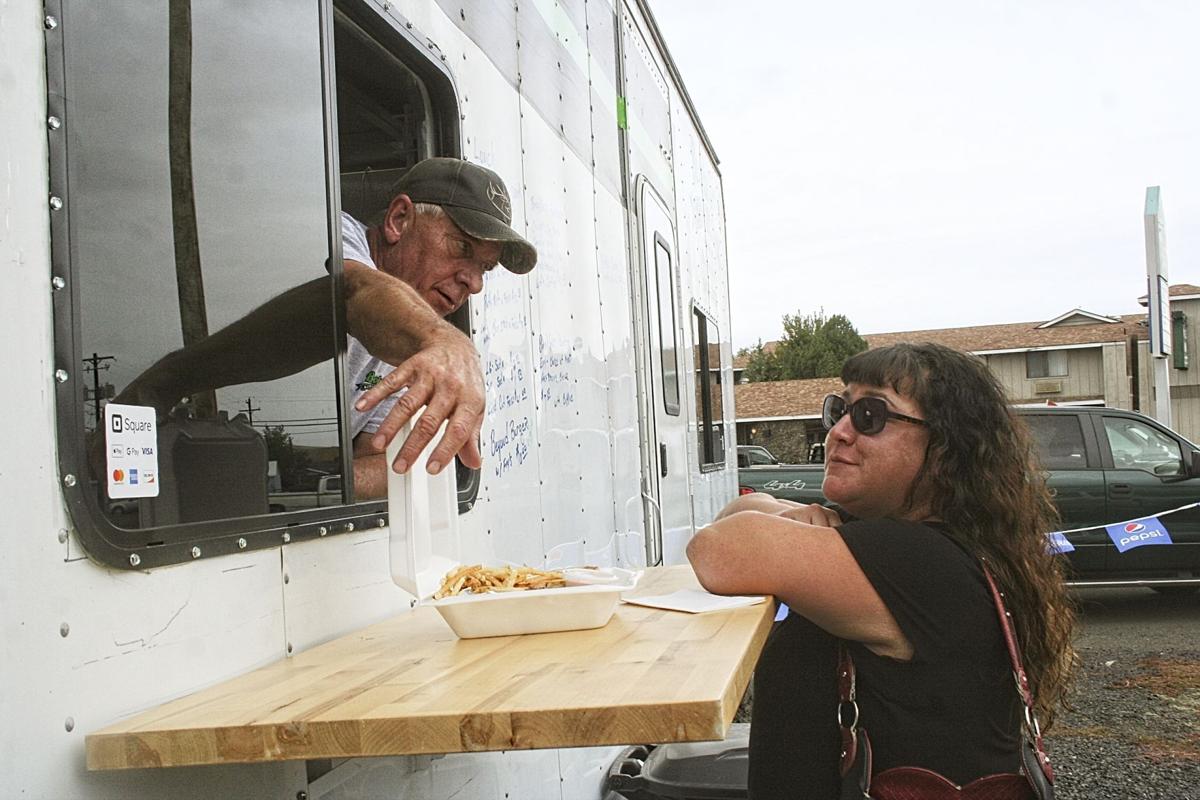 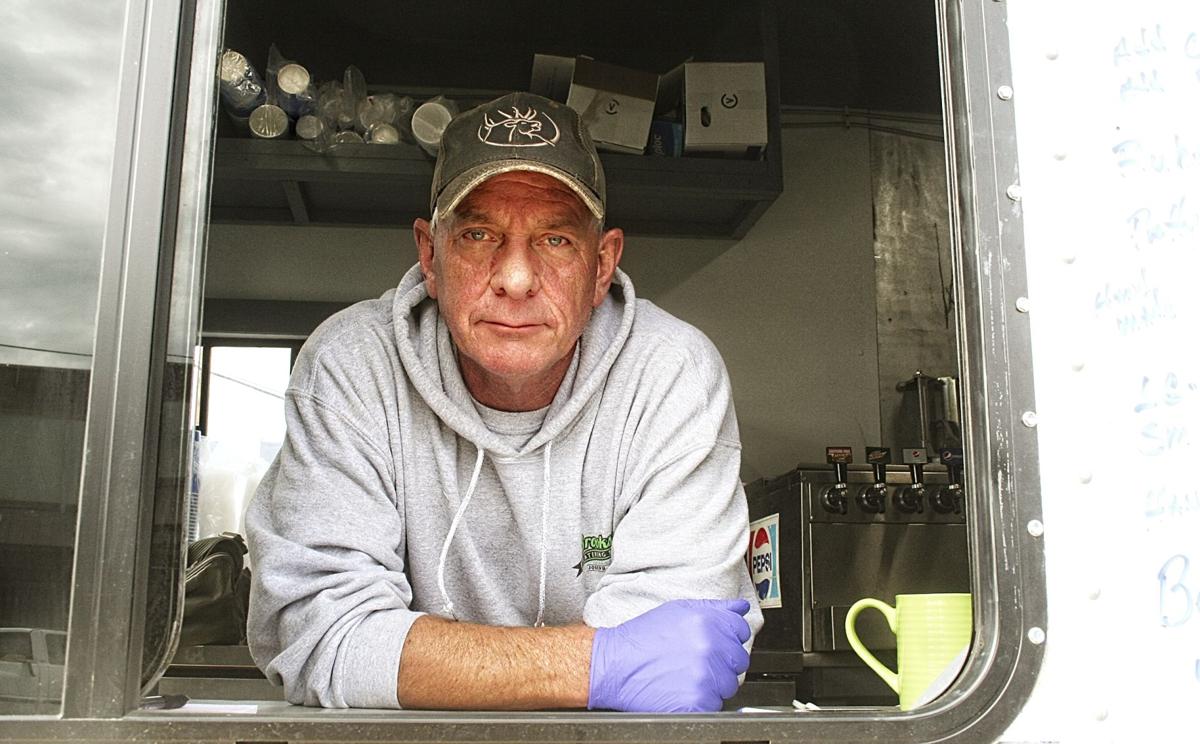 Jeff Brookshire, of Joseph, peers out the serving window of his new Brookshire Catering Services trailer that opened Sept. 24 on Second Street just off West North Street in Enterprise.

Jeff Brookshire, of Joseph, cooks a couple of reuben sandwiches at his new Brookshire Catering Services trailer that opened Sept. 24 on Second Street just off West North Street in Enterprise. At present, he’s open for breakfast and lunch, Monday through Friday, but has plans to expand.

Jeff Brookshire, of Joseph, peers out the serving window of his new Brookshire Catering Services trailer that opened Sept. 24 on Second Street just off West North Street in Enterprise.

Jeff Brookshire has opened what he considers an excellent business venture — a mobile catering unit located on the Second Street side of the Main Street Motors block in Enterprise.

“We built this trailer this spring and put it together and here we are,” he said, emphasizing that he likes the combination of running an eatery and the mobility.

“I’ve been cooking my whole life. I had one fixed operation before, but I like the mobile,” he said. “I can go where I want to be. It gives me the freedom and the luxury that, if I want to go to La Grande for a week, I can go to La Grande.”

Open Monday through Friday, for now he’s open from 6 a.m. to 3 p.m. He expects to expand to offering dinners, at which time he’ll extend his hours to 6 p.m.

After opening Sept. 24, he planned to help with the following weekend’s Alpine breakfast at Wallowa Lake during Alpenfest. With Alpenfest’s move from the old Edelweiss Inn to the marina at the lake, there was a need for the facilities he could provide.

“He has a self-contained catering unit so he can provide power as necessary,” said Alpenfest Alpenmeister Chuck Anderson. “He’s helping the Wallowa Lake Tourism Association put on the Alpenfest breakfast, but most of our vendors are going to bring their own generators.”

Brookshire’s familiarity with Enterprise made locating his trailer on the Main Street Motors lot practical, since he once worked for the owners of a previous car lot located there, Mick and Sharon Courtney, who ran a Ford dealership in Enterprise for many years.

“I know there’s water and sewer and power here,” he said. “I’m good on water, but having sewer makes it nice because I don’t have to worry about my holding tanks freezing.”

He said the situation works out well for all concerned.

“The Stangels (the owners of the property) were great,” he said. “They agreed to rent the space I’m on for the winter and hopefully it’ll work out good for both of us.”

And the people at Main Street Motors have proven to be reliable clientele.

Customers have found the menu appealing, Brookshire said. Most of the sandwiches come with fries and a drink for $10. This includes burgers, reubens, Phillies and patty melts. For vegetarians, he also has the Beyond Burger and is planning a Beyond Brat, a vegetarian bratwurst that will be sweet or spicy Italian flavored. He’s also planning meatball sub sandwiches.

“Our menu here will vary weekly,” Brookshire said. “My goal is to come up with, as I call it, a 10-buck lunch, where you get a full lunch, with a drink, for 10 bucks. It’ll vary and we’ll change it every day. I’m trying to keep my prices down so the normal working person can afford to eat here in town. They can call in orders, they can text in orders, too. We will have it when they get here and it’s done.”

The exception is one of his specialties, a chicken cordon bleu sandwich he sells for $11, given the higher cost of the ingredients.

“We do breakfast and lunch right now,” he said. “We’ll be working into to-go dinners. People will be able to order the night before. We’ll have a different item every night of the week, You can order a meal for your family and stop by and take it home.”

“I prefer a text. That way, if I don’t hear the phone ring, I’ll at least see the text.”

Plans are to remain at the Enterprise location during the week for the winter. He’s often gone weekends to cater weddings or other events, which he has been doing for years.

“We’ll be here all winter and then we’ll move to the lake in the spring,” Brookshire said. “As soon as the weather starts cooling a little more, we’ll start doing homemade soups and homemade chili. We’ll have a different soup every day.”

Brookshire likes to have a diverse, homemade menu.

“I’ll vary the menu from week to week,” he said. “Like, I’m going to run out of corned beef. I didn’t plan on the reubens being as popular this week. I bake off my own corned beef; I don’t buy the premade.”

He also breads fish and chicken strips by hand, and cuts his own french fries from potatoes grown in the La Grande area. None are frozen.

“We’re going to be doing Mahi fish and chips,” he said.

“If somebody has something they like or want, if they let us know, I’ll try to accommodate them,” he said.

As hours and menu expand, he may have to hire another person.

“On the cooking side, I’m pretty picky. I don’t let hardly anybody around it but me.”

Brookshire is appreciative of the business he’s gotten so far in Enterprise.

“It’s been great,” he said. “We’ve got a great first couple or three days down here. It’s getting better every day.”