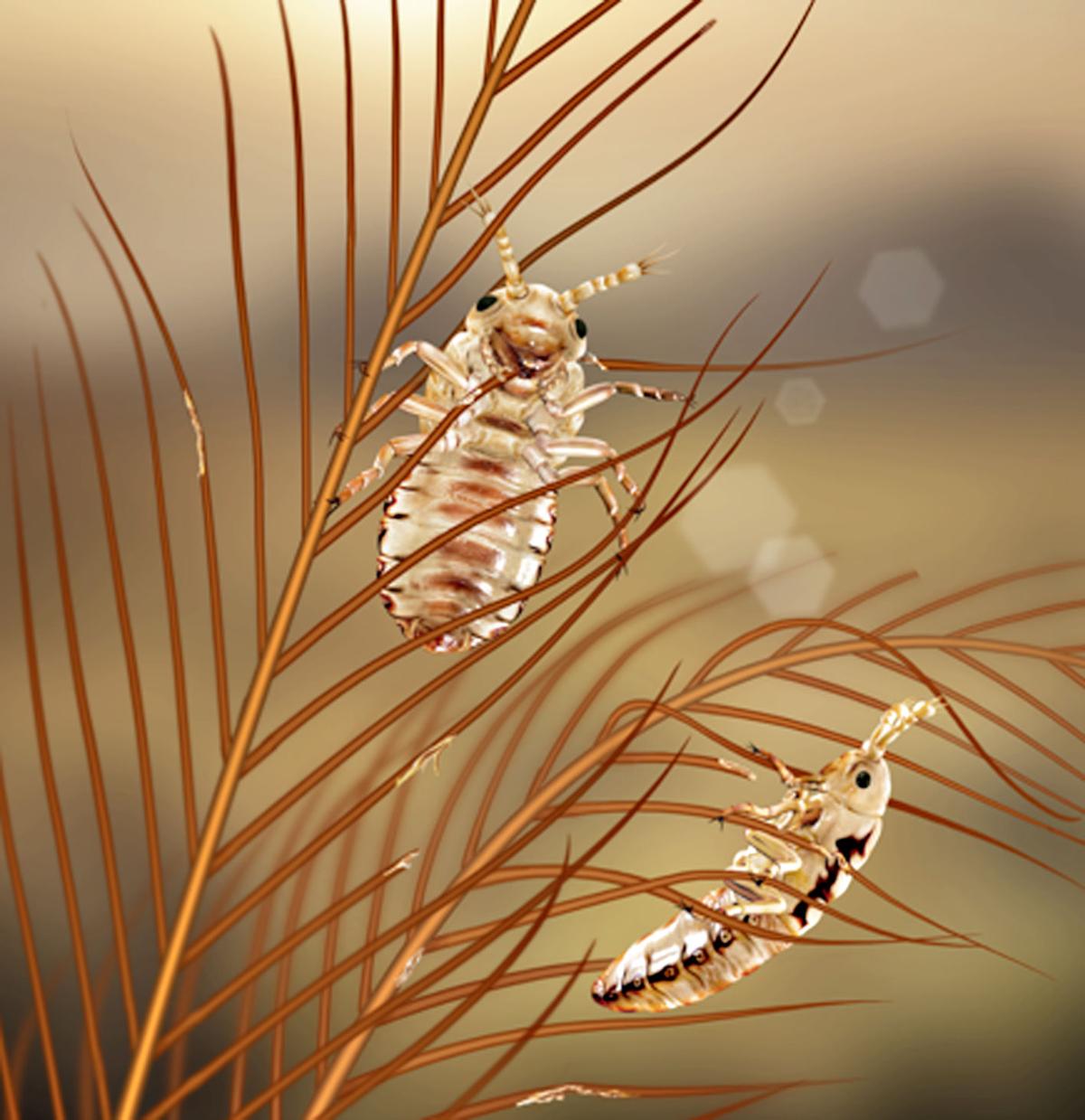 An artist’s rendering of what the tiny lice trapped in amber on dinosaurs’ feathers might have looked like when alive.

An artist’s rendering of what the tiny lice trapped in amber on dinosaurs’ feathers might have looked like when alive.

We know that birds, whether wild or domestic, can have problems with tiny biting insects known as lice. The pests find the birds feathers to be an almost irresistible home, and a great snack. New fossils found in amber reveal the insects have been around for at least 100 million years, when they feasted on feathered dinosaurs.

The find “is very, very cool and very exciting for the louse community,” says Julie Allen, an evolutionary biologist at the University of Nevada in Reno who was not involved with the work. “Having an actual fossil—and not only this old, but feeding on feathers? That’s spectacular.”

Genetic work on living lice had suggested they arose during the time of feathered dinosaurs, but fossil lice are few and far between. The tiny creatures are unlikely to fossilize, and even if they do they’re hard to spot. Paleontologists Taiping Gao, Dong Ren, and Chungkun Shih of Capital Normal University in Beijing and their colleagues spend a lot of time scanning fossils for overlooked insects, especially parasites like lice. In two specimens of amber from Myanmar, they noticed 10 tiny insects among well-preserved downy feathers, which showed damage as though something had been eating them.

The insects, which are just 0.2 millimeters long—roughly twice the width of human hair—don’t look exactly like modern lice. Their mouthparts are not as sophisticated as those of today’s lice, and they have long, stiff bristles on their claws and antennae, the researchers report today in Nature Communications. They named the insects Mesophthirus engeli. (Mesophthirus means Mesozoic louse, for the geological era when it lived, and the species name is for entomologist and paleontologist Michael Engel.)

Like modern lice, the ancient lice have no wings, their eyes are tiny, and they have short antennae and short legs—suggesting they didn’t travel far or fast. “They look a bit weird, but they definitely have louse-y features,” Allen says. Because they are so small, the researchers think their specimens were nymphs—juvenile lice—and the fully grown insects might have been half a millimeter long.

Most lice today are extreme specialists, living on just one species or even just a specific body part of a single species. The feathers in the two amber specimens look quite different and may be from different dinosaurs, so it seems M. engeli was less picky, Shih says. Both feathers had damage that closely resembles that made by modern feather-eating lice, and the researchers suspect the ancient insects were the culprit. (Lice that infect humans drink blood, but many other lice today eat feathers or flakes of skin.)

Because these lice seemed to eat feathers, they probably didn’t bite their hosts’ skin, so infested dinosaurs probably didn’t itch, Shih says. But the damage they did to feathers might have prompted the dinos to groom themselves, preening the way modern birds do to get rid of lice and mites, Allen says. “Now we know that feathered dinosaurs not only had feathers, they also had parasites—and they most likely had ways they tried to get rid of them.”