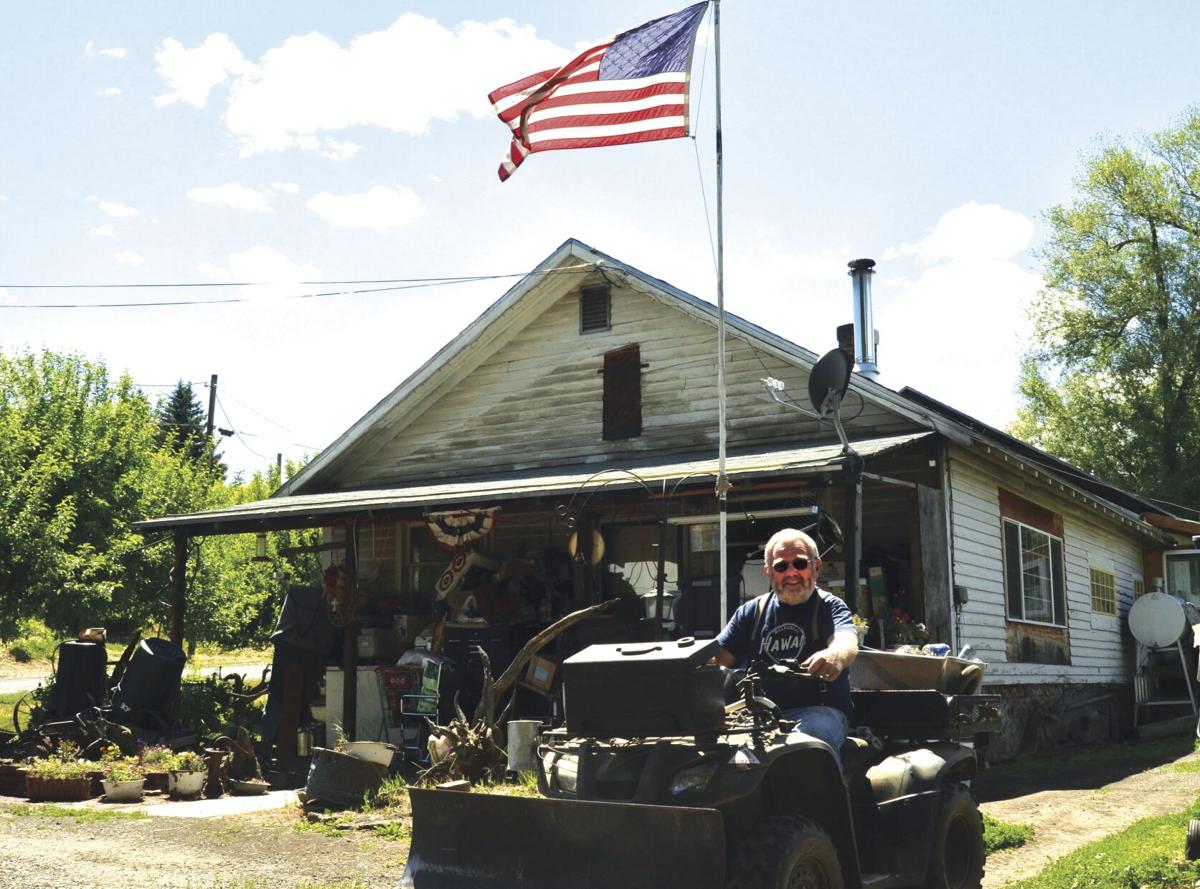 An American flag flies proudly over the Wallowa home of Terry Larm as he sits on his four-wheeler. Larm, a lifelong resident and longtime city worker, was recently selected to be the town’s grand marshal at its Fourth of July Parade. 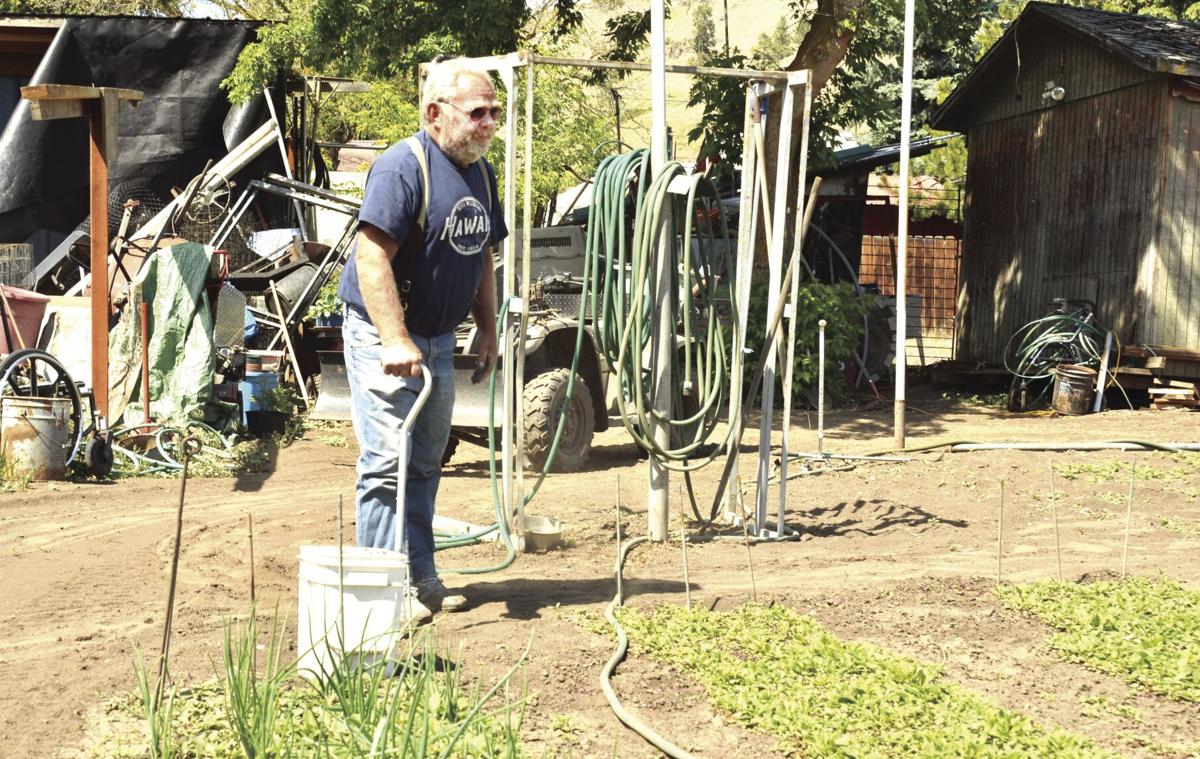 Terry Larm surveys the garden where he spends much of his time these days. The lifelong Wallowan and longtime city worker was recently selected to be the town’s grand marshal for its Fourth of July Parade.

An American flag flies proudly over the Wallowa home of Terry Larm as he sits on his four-wheeler. Larm, a lifelong resident and longtime city worker, was recently selected to be the town’s grand marshal at its Fourth of July Parade.

Terry Larm surveys the garden where he spends much of his time these days. The lifelong Wallowan and longtime city worker was recently selected to be the town’s grand marshal for its Fourth of July Parade.

WALLOWA — Decades of service to the city and his willingness to go above and beyond are what garnered Terry Larm the honor of being this year’s grand marshal for Wallowa’s annual Fourth of July Parade, City Hall announced last week.

City Recorder Carolyn Harshfield said the parade committee is made up of four city employees and Mayor Gary Hulse and they were recently discussing who they wanted to honor.

“We were just doing votes on who we thought would be fitting and we picked Terry because of all the time that he put in for the city,” Harshfield said. “He was always so helpful, even after he retired, he would do anything to help people.”

Hulse said Larm’s helpfulness and dedication to Wallowa went into his retirement years and continued despite a disability.

“Terry had physical disabilities, but he was always willing to work way above what he appeared to be able to,” the mayor said. “He was an excellent worker.”

Larm wasn’t really sure why he was selected.

“I was just told by the city recorder, Carolyn, that I’d been selected and she wanted to know if I would accept it,” he said.

Larm worked for the city as its one-man maintenance crew for 29 years — from 1980 until he was diagnosed with a degenerative muscle disease and forced to retire in 2009. The disease keeps him from picking up his feet very well. He rides a four-wheeler around his place or uses canes.

He said that as he neared retirement, he had one final meeting with the City Council and city attorney. They wondered if his disability would allow him to be put on light duty. They wondered about having him deliver shutoff notices. But that means going up steps.

“I think the clincher was when I told them that when I pick up my left foot, sometimes I have to lift it over onto the clutch,” he said. “That was the end of my career right there. I was given a ride home that day and that was the end.”

Will he ride his four-wheeler in the parade? No, he said, he’ll ride in a locally owned classic convertible.

“I was hoping to someday build myself a little, homemade submarine and ride in the parade, but I think this’ll take the place of that idea,” he said.

The idea was an allusion to his four years in the Navy. From 1972-76, he served aboard an atomic fast-attack submarine out of Hawaii. While at sea, he went to Guam, Philippines and the Indian Ocean. He worked as a cook.

He recalled that during one 80-day deployment — subs don’t get resupplied at sea — they were running short of food.

“I was getting kind of nervous,” he said. “I was thinking of 101 ways to fix something out of egg noodles.”

A lifelong Wallowan, Larm is the third generation to live in his house. He has five kids from his first marriage who were born while living there.

“I was born and raised here,” he said. “I spent all my life other than my four years in the service here and I really enjoy it.”

He said his father and grandfather both had long careers in Wallowa.

“My grandad used to be the section foreman for the railroad,” he said. “My dad worked as a grader at the sawmill until the mill went out in ’61.”

When his mother died in 1963, Larm’s father worked at the school as a janitor. He died in 1973. Both parents died of heart problems, but Larm’s seems strong. But the muscle disease has changed his life unexpectedly.

“I ended up retiring a lot earlier than I’d anticipated,” he said.

These days he enjoys gardening. He raises pole beans, cabbage for sauerkraut, red beets to pickle (his wife, Anita, doesn’t like it, but her doctor recommended them), onions, tomatoes, potatoes, carrots, Swiss chard and spinach.

Larm had to put up a deer fence because predators in the area have been driving the deer into town.

“It’s a heck of a note to raise your stuff and then have the deer eat it,” he said.

This year’s Fourth of July Parade will be back to normal for Wallowa. Last year, during the depth of the coronavirus pandemic, the city was not allowed by the Oregon Department of Transportation to close off Highway 82 through town for the parade. But that didn’t stop feisty Wallowa. They held an impromptu parade that went down the highway, across town to the truck route, back to the highway and around again.

This year, it’ll be the normal route starting at the football field at 2 p.m. and traveling down Highway 82 — which serves as Wallowa’s Main Street — to Storey Street, where the parade will take a left and disband.

This year won’t be Larm’s first experience in the parade. He recalls one “bad experience” when he was a child and his mom made him a clown costume — with no pockets. Someone was handing out long sticks of bubble gum.

“Someone I thought was a friend said he’d hold it,” Larm said, but then the “friend” showed his true colors.

“He didn’t give it back,” he said. “That’s one of those things that sticks in your mind.”

But he truly appreciates the meaning of Independence Day.

“I really honor the veterans and what everybody’s gone through to keep us free,” he said. “I was glad to be in the service.”