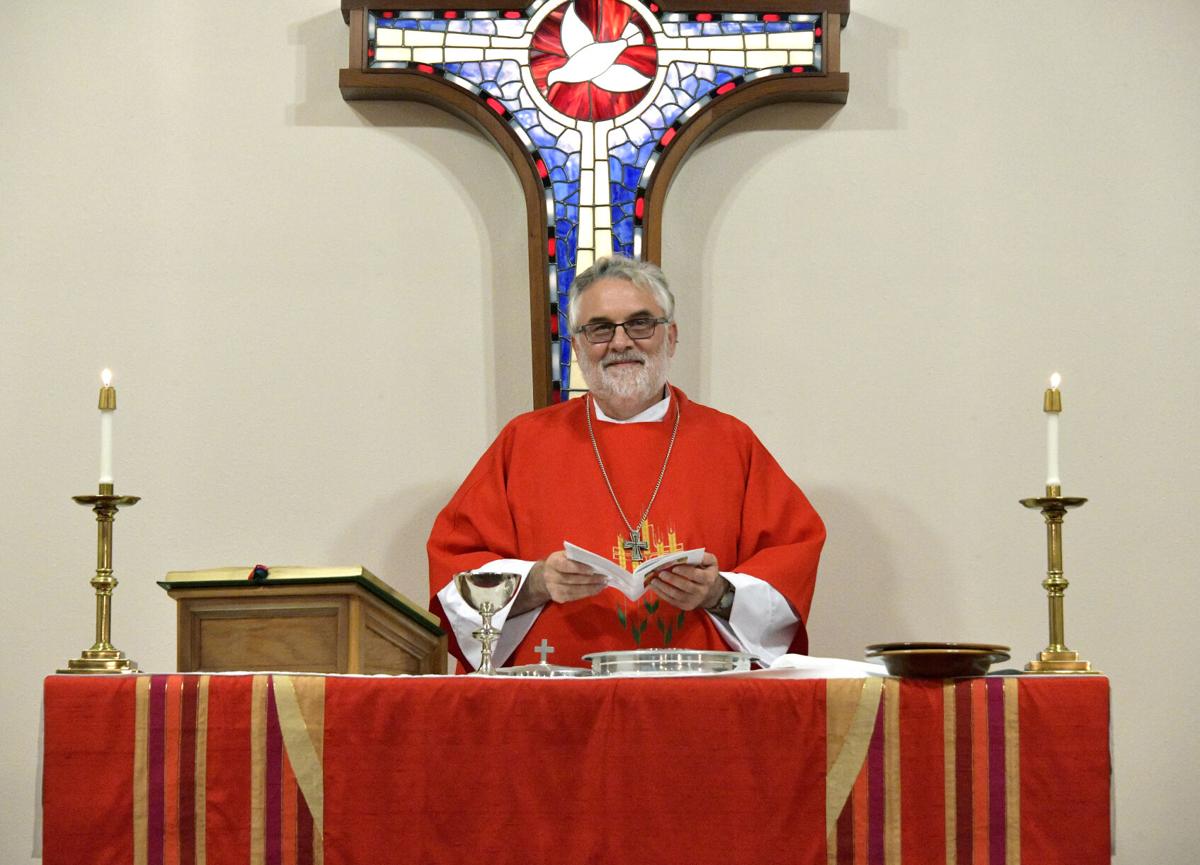 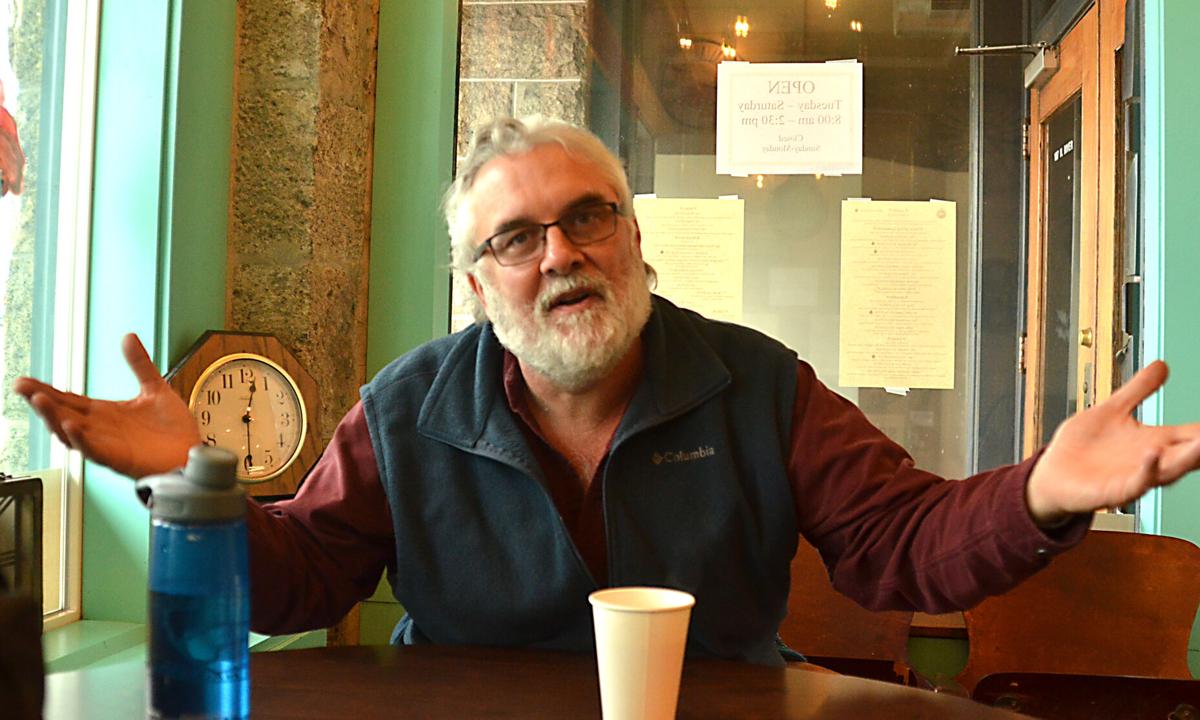 John King discusses his calling to be pastor at Grace Lutheran Church in Enterprise over a cup of coffee Wednesday, Jan. 20. At present, King is in Enterprise 10 days a month, but hopes to make that full time. 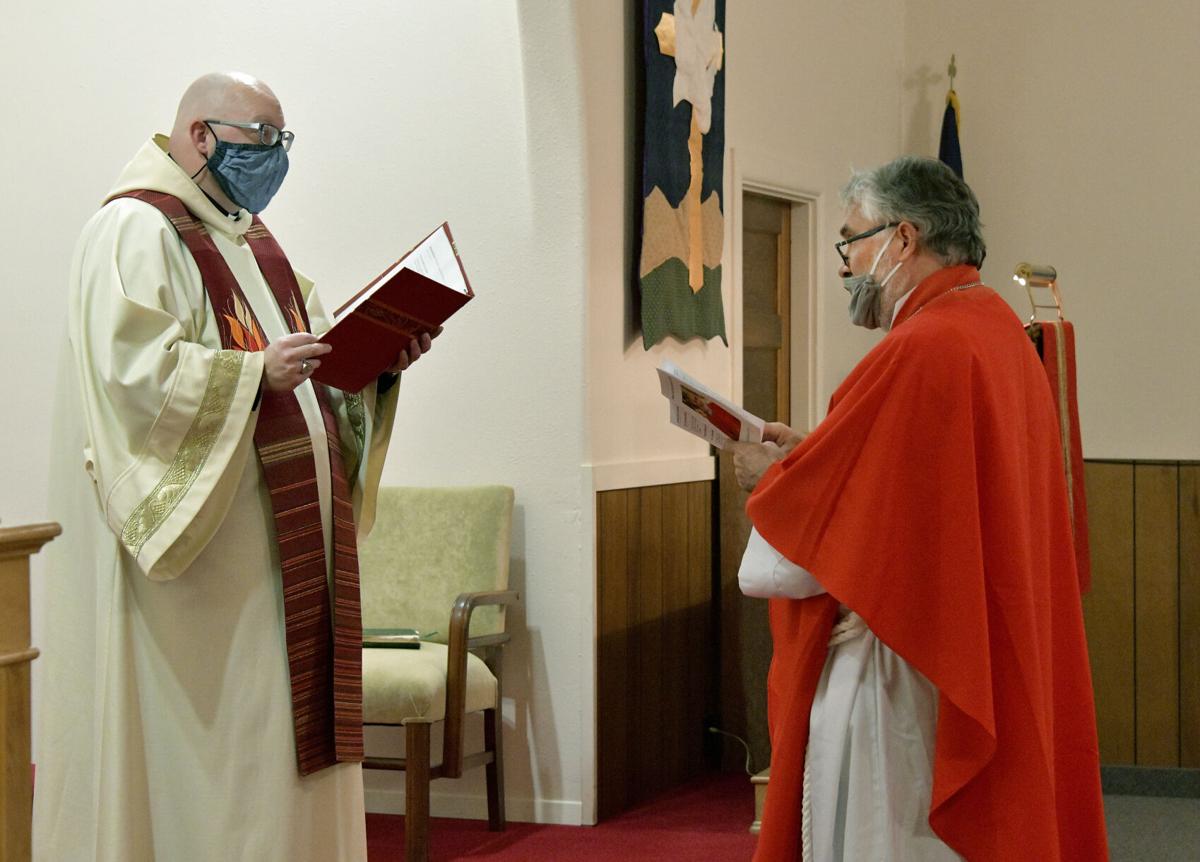 John King discusses his calling to be pastor at Grace Lutheran Church in Enterprise over a cup of coffee Wednesday, Jan. 20. At present, King is in Enterprise 10 days a month, but hopes to make that full time.

ENTERPRISE — John King’s gifts are not exactly as the Apostle Paul lists spiritual gifts, but the new pastor at Grace Lutheran Church in Enterprise has talents that fit right in.

“I figure I have one main gift, and that gift is the ability to make connections,” King said during a recent interview. “As a scholar, I can connect ideas to ideas. As a teacher, I connect ideas to people. As a networker, I connect people to people. A lot of people might think it’s strange that someone with a lot of academic education would be a good facilitator and networker, but I’m actually very good at that. That’s because both of those are applications of the same basic skill that God has given me.”

Installed at Grace Lutheran in November, King spends 10 days a month in Enterprise, commuting from his home in Corvallis, where his wife, Donna, is a Lutheran deaconess.

“We want to move here permanently but my wife is still working in Corvallis,” he said.

Although new to the ministry, he has much in the way of background in theological education. He has a Ph.D., a doctorate in theology and a vocational doctorate of ministry.

When not pastoring the small church that regularly has only about 10 people for Sunday worship, King is getting to know the community. He has attended meetings of the Wallowa County Board of Commissioners and city councils in Enterprise and Joseph.

“I want to learn what’s going on because I’m a networker. As a networker, I’m a catalyst,” he said. “Sometimes I can do something that I don’t know anything about. But if I meet two people who do know something about it, then I can bring them together. The more data I have and the more people I meet, the more I can facilitate.”

Although the congregation is small, that can work to an advantage.

“I turned down a full call at a church in Pennsylvania to take this one because I like this area and I feel that this is more suited to my gifting,” he said. “I’ve heard people say, ‘I think John is going to be a pastor to the community.’ I really do believe God has built me for a small town. … I like the connectedness of a small town.”

King still hopes to be able to grow his congregation, but knows he’s not the one who will make it happen.

“It’s God that gives us the growth. The second I think I can do it, we’re in trouble,” he said. “The only thing I know how to do is put one foot in front of the other and meet as many people as I can and be open to people who I meet and just enmesh myself in the community. I’ve often said that I do not have the gifts of a church planter, but God can plant a church through me because God is sovereign.”

In putting “one foot in front of the other,” he knows he has a bit of a hike — but he has plans.

“We’re rebuilding because the church has not had a called pastor in decades,” he said. “It’s a very small group at this point. One of the things we’re doing right now is instituting a couple of Bible studies. We have Sunday worship and I’ve said we need to go out and have lunch after worship so we can have fellowship,” he said, acknowledging that may still be limited by COVID-19 pandemic restrictions.

King also used the oft-used scriptural analogy of likening the growth of his church to that of a plant.

“I think that to say it this way, I’m going to treat it more organically than mechanically so when a plant grows, certain things happen at certain stages,” he said. “As the congregation grows, I can be in a position to make decisions based on the gifting of the people who are there.”

Pastors often are called upon to counsel members of their congregations, but such counseling is one spiritual gift King does not believe he possesses. He distinguishes between the gift of counseling and pastoral care. He can do the latter, which he sees as just being with people, listening and accompanying them through their problems. When counseling, aside from something simple where he can give moral or ethical advice from Scripture, he said he’d refer a person to a professional.

“That doesn’t mean I want to end the relationship. I can still care for them as a pastor without prying into their counseling relationship,” he said. “Maybe I won’t have the answers, but can ask really good questions” and help a person realize the answers on their own.

A combination theologian/scientist — he’s taught engineering — King believes he can be a real boon to Wallowa County and facilitate discussions on the connection between theology and science.

“I’m hoping that, with my background in science, in a community like this, there may be people who want to have those types of discussions,” he said. “Maybe in time, when I get my feet on the ground, we could do something on religion and science. It’d probably be a very small, select group of people. But there are people in this world who are intellectually hungry. My wife knew a man who came up to her one time and was in tears. He said, ‘I’m an intellectual and I don’t get fed at my church. It’s all this emotional stuff and there’s no way for me to fit in.’ There are people in this world who are just dying to have their intellect ministered to. Hopefully that’s a need I can fulfill.”

He and Donna — who is getting ready to retire — also are looking forward to moving here and already are becoming familiar with the county’s arts scene.

“She likes just about anything,” King said of his wife’s artistic bent. “She’s done graphic design, but she quilts, too. That’s not a limitation because she’d like to learn other media. She’s just a very creative person. She has boundless creativity.”

They’ve been to Josephy Center for Arts and Culture and like it.

“We know about their classes and my wife went there,” he said.

They also like the outdoors opportunities Wallowa County offers.

“Obviously, we like the ‘eye candy’ — you can’t beat that,” meaning the scenery, he said. “Also, the nice people, friendly people, decent people. I suppose there are going to be a lot more things I learn to like as I get to know it. Again, it’s the scenery, the situation and the people.”