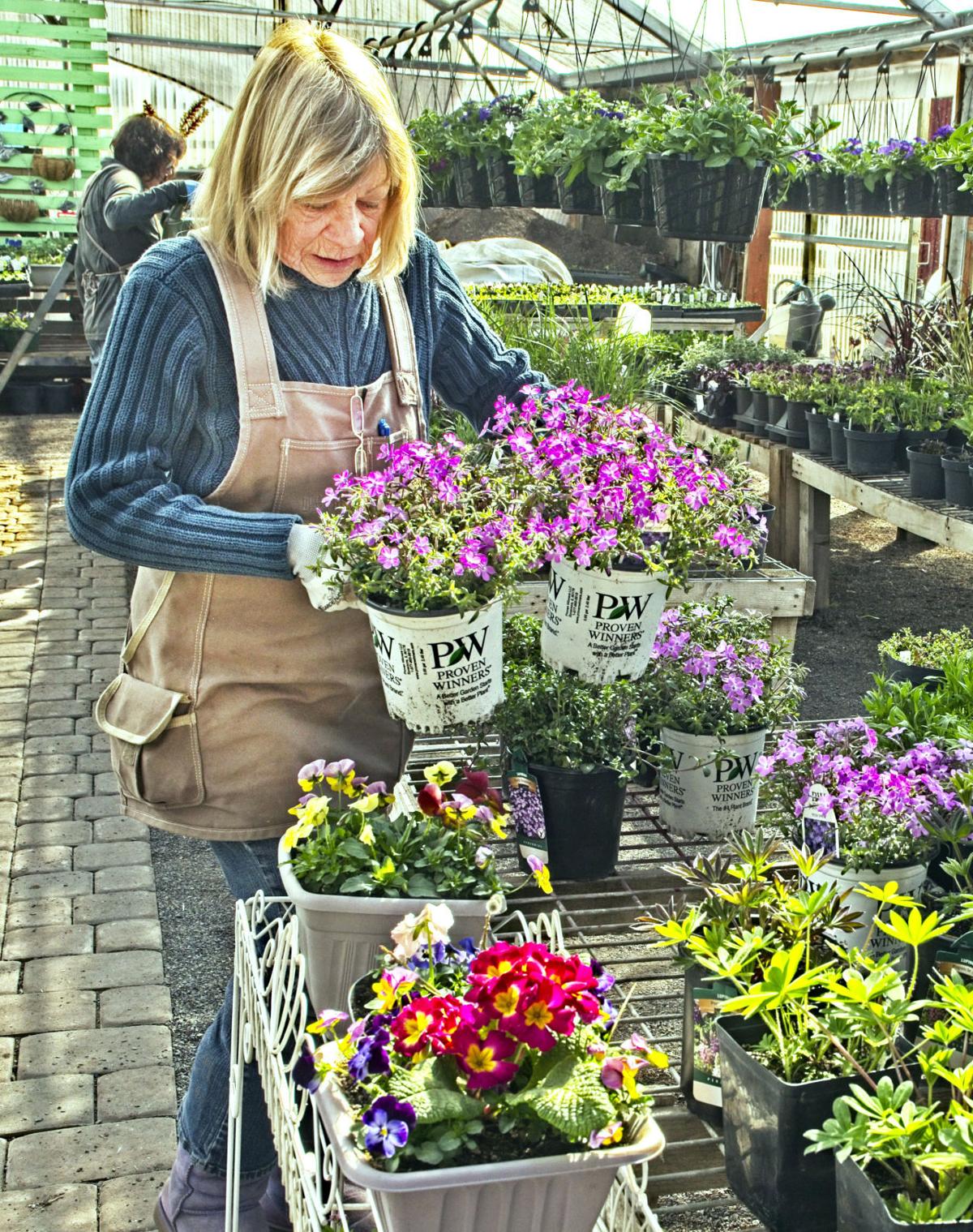 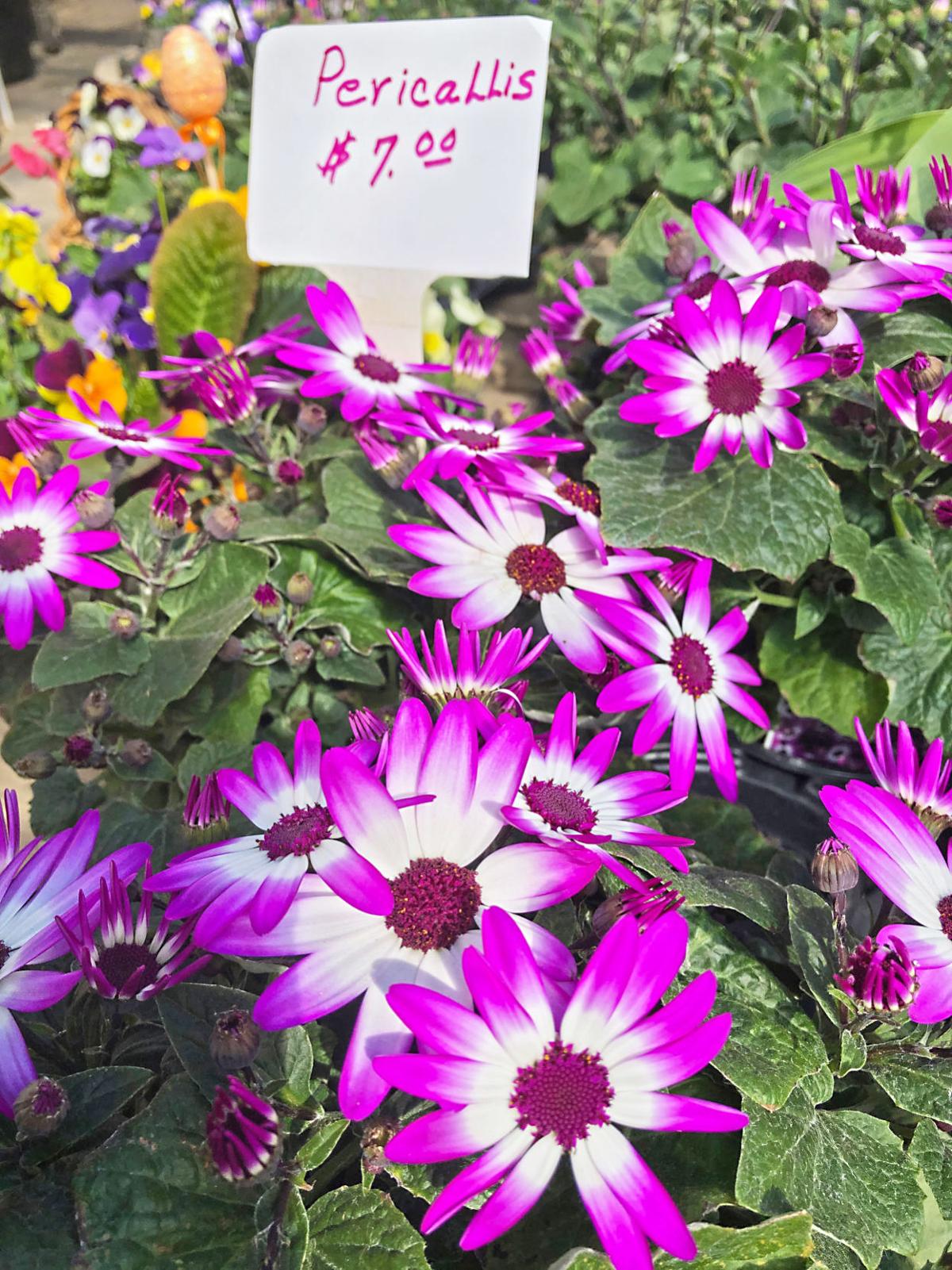 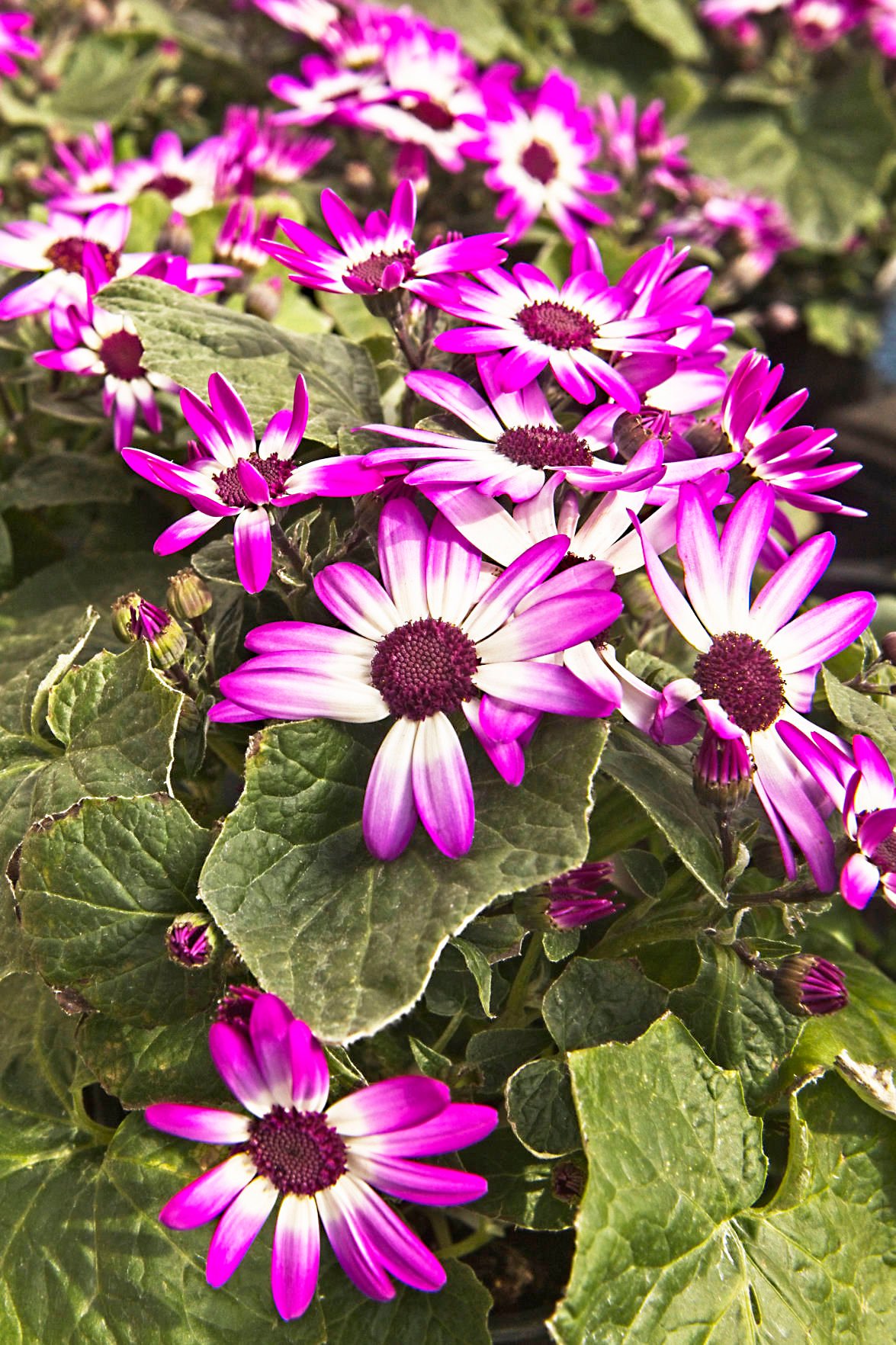 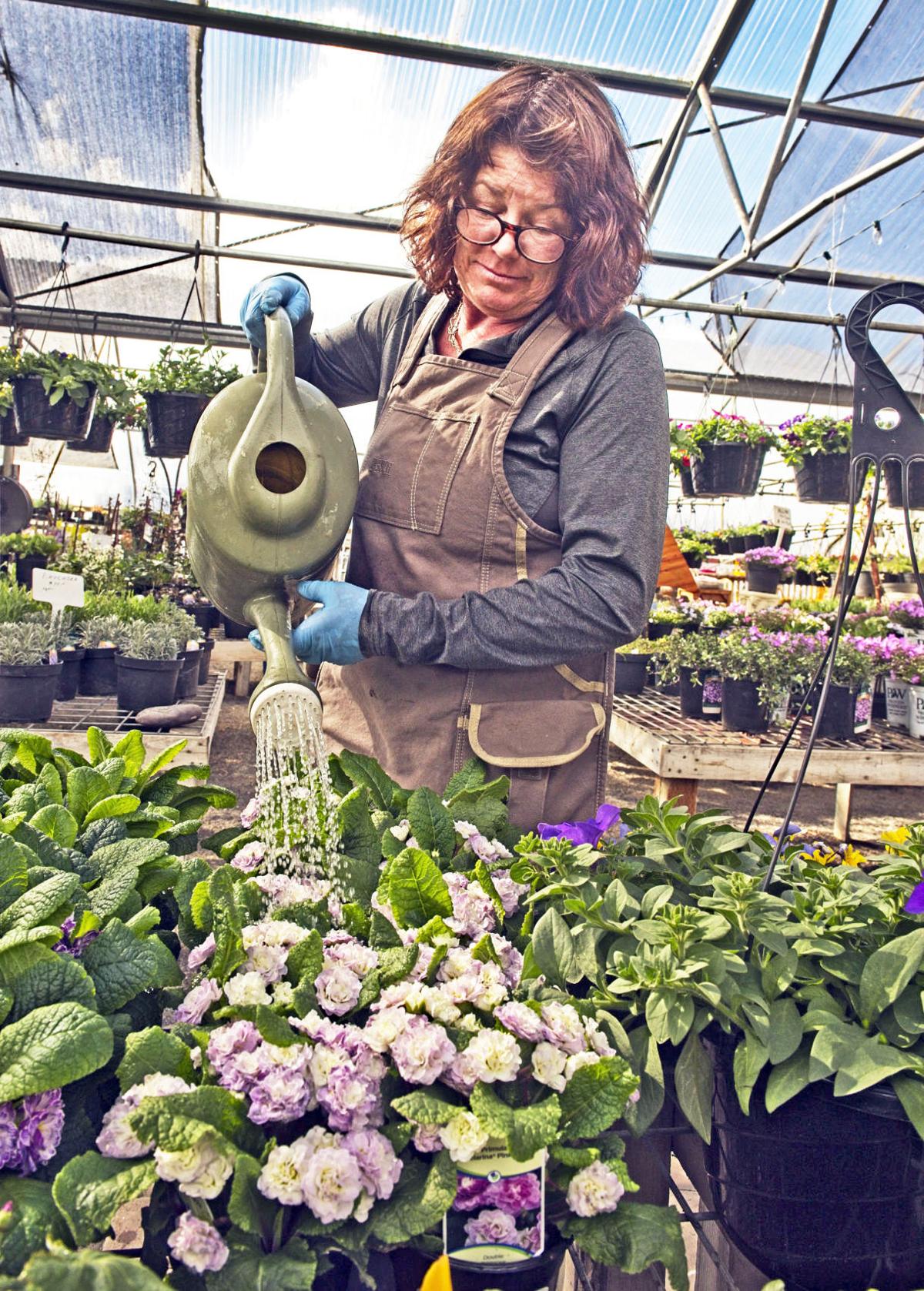 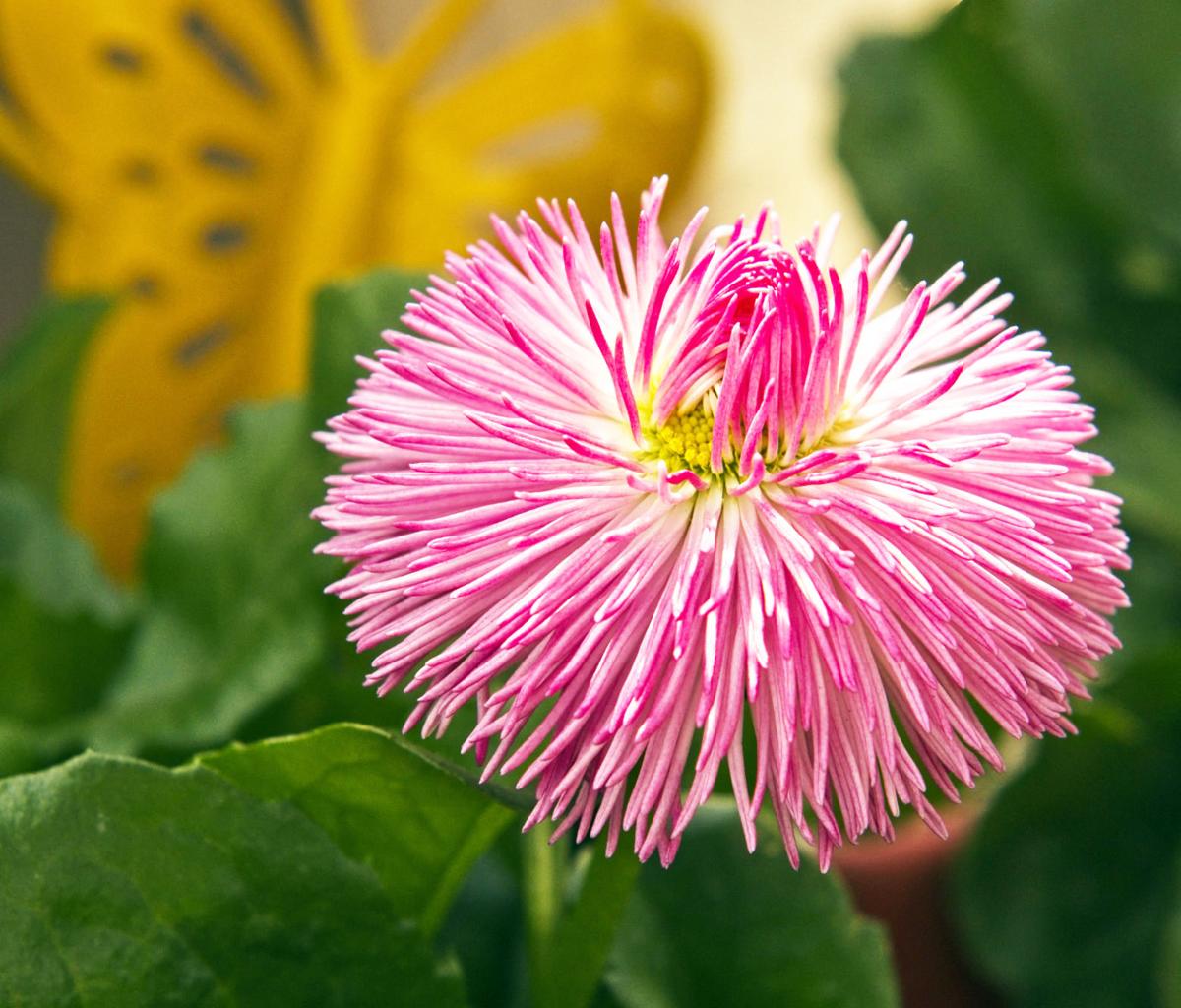 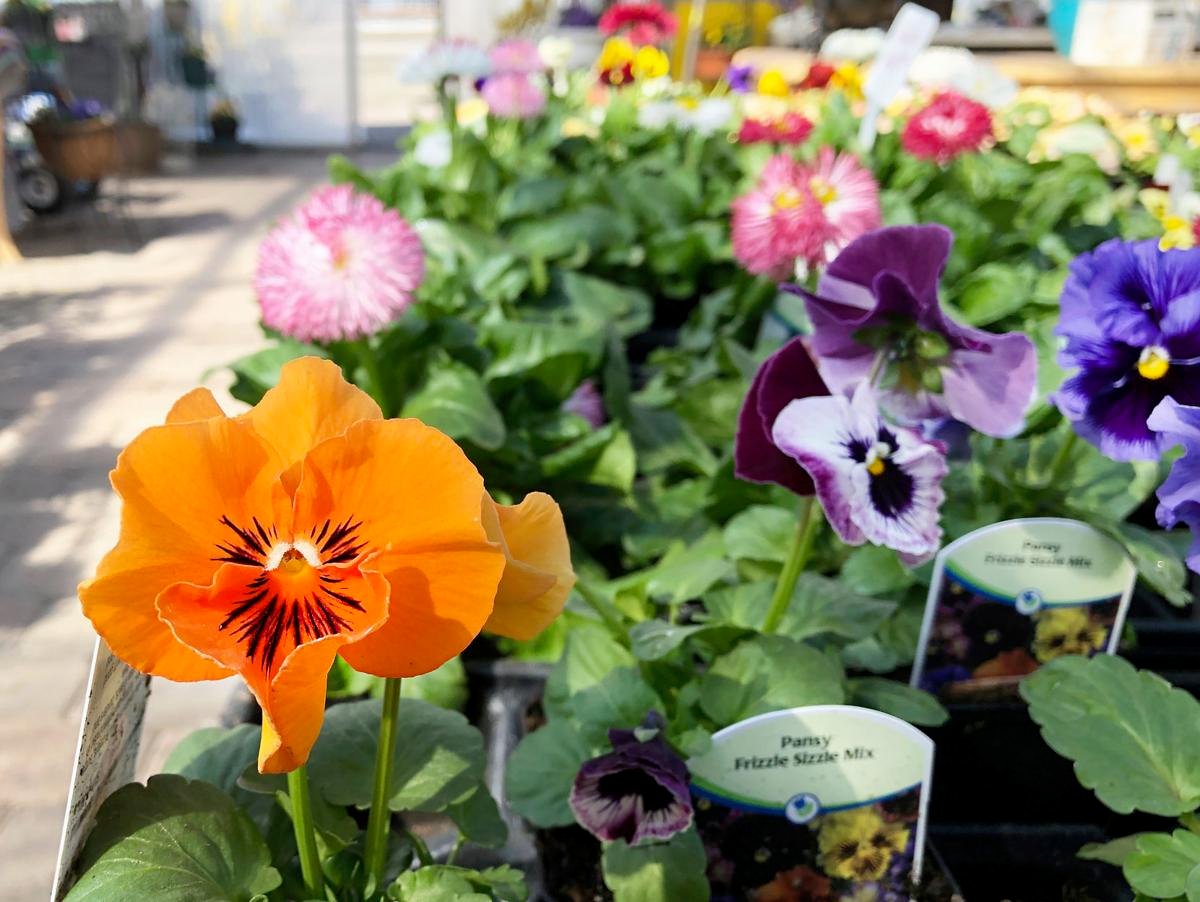 Pansies brighten up the greenhouse at Walllowa County Nursery. 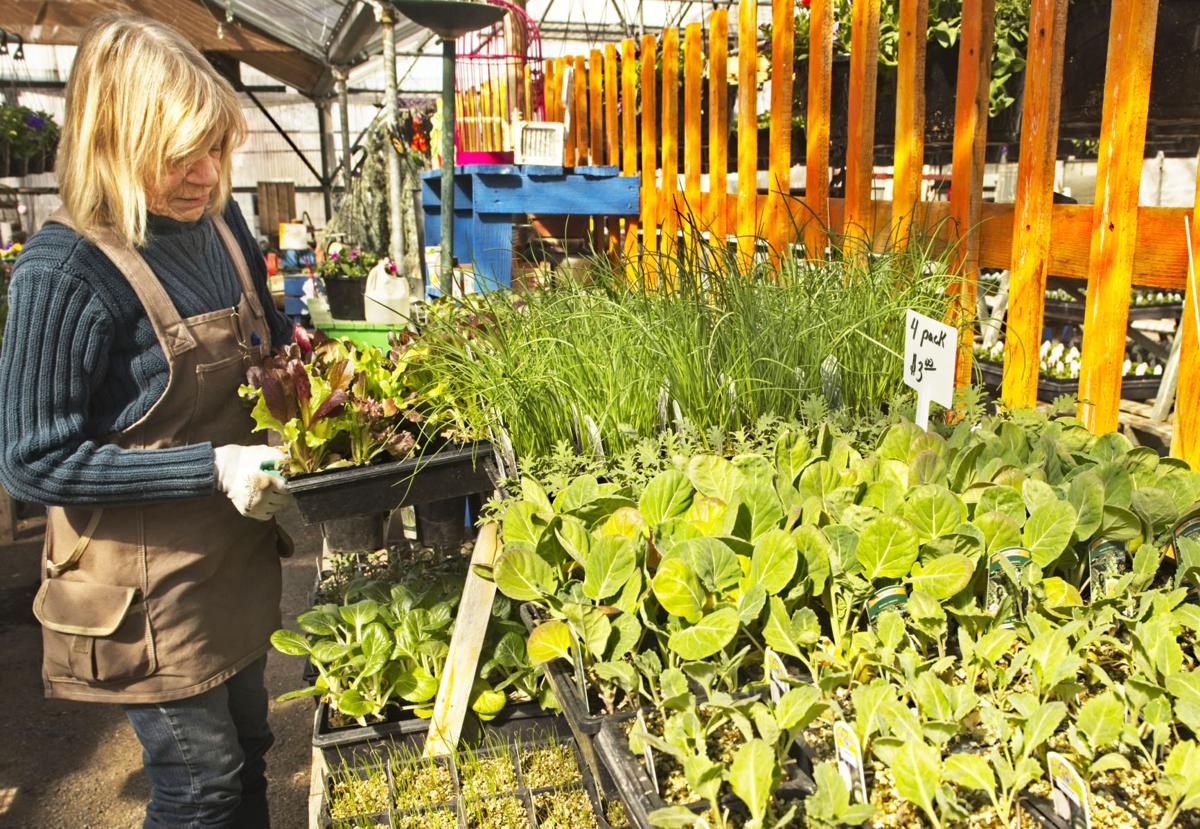 Irene Bates sets a tray of young lettuce plants into place among some of her other ready-to-grow vegetables at Wallowa County Nursery. 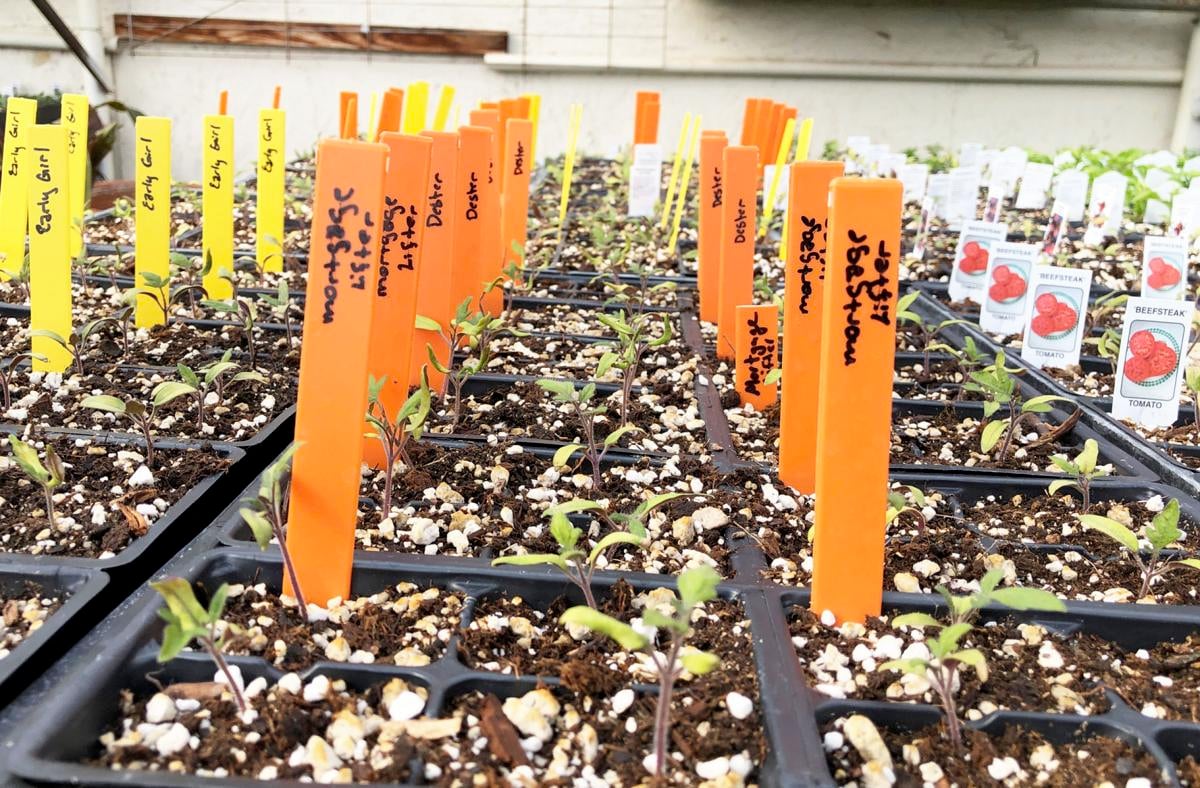 Infant tomatoes get a good start at Alder Slope Nursery. They won’t be sold to new homes until they are mature plants in gallon-sized pots, ready to produce. 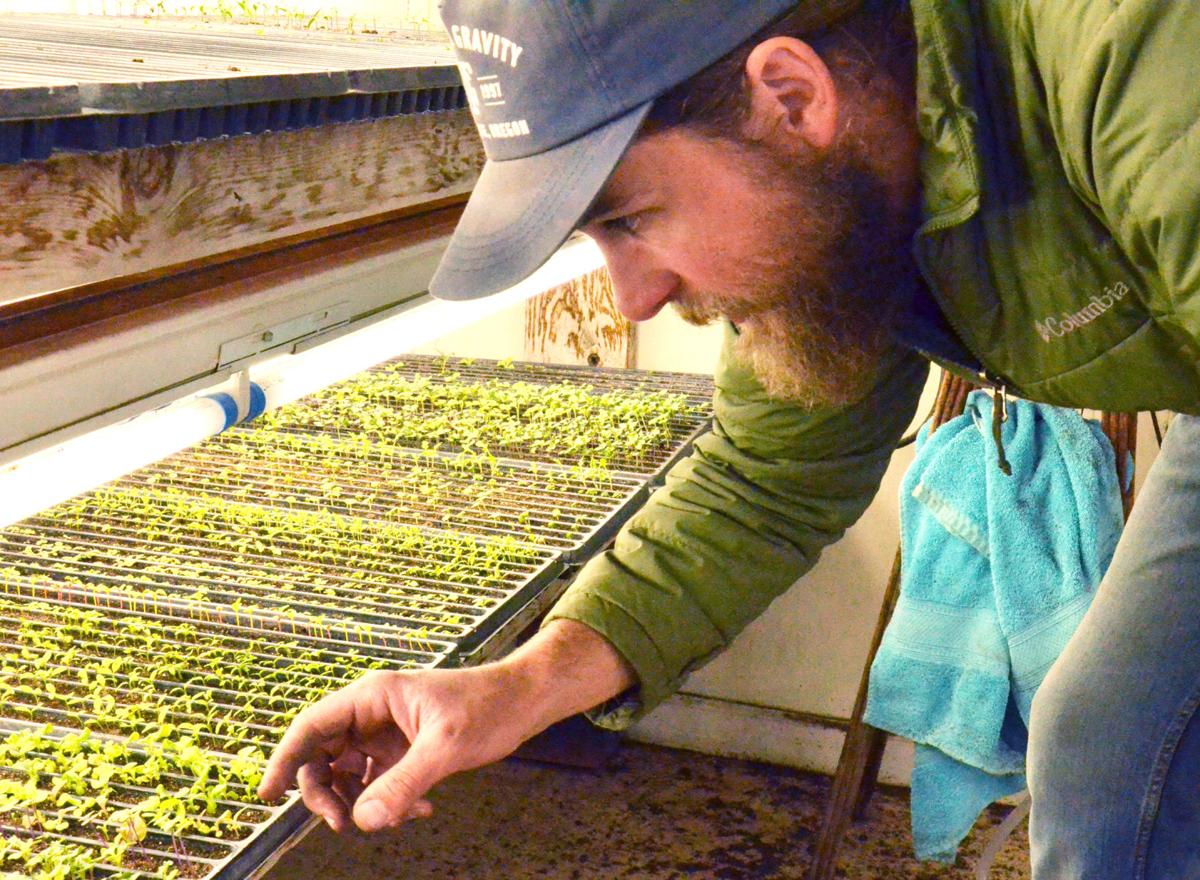 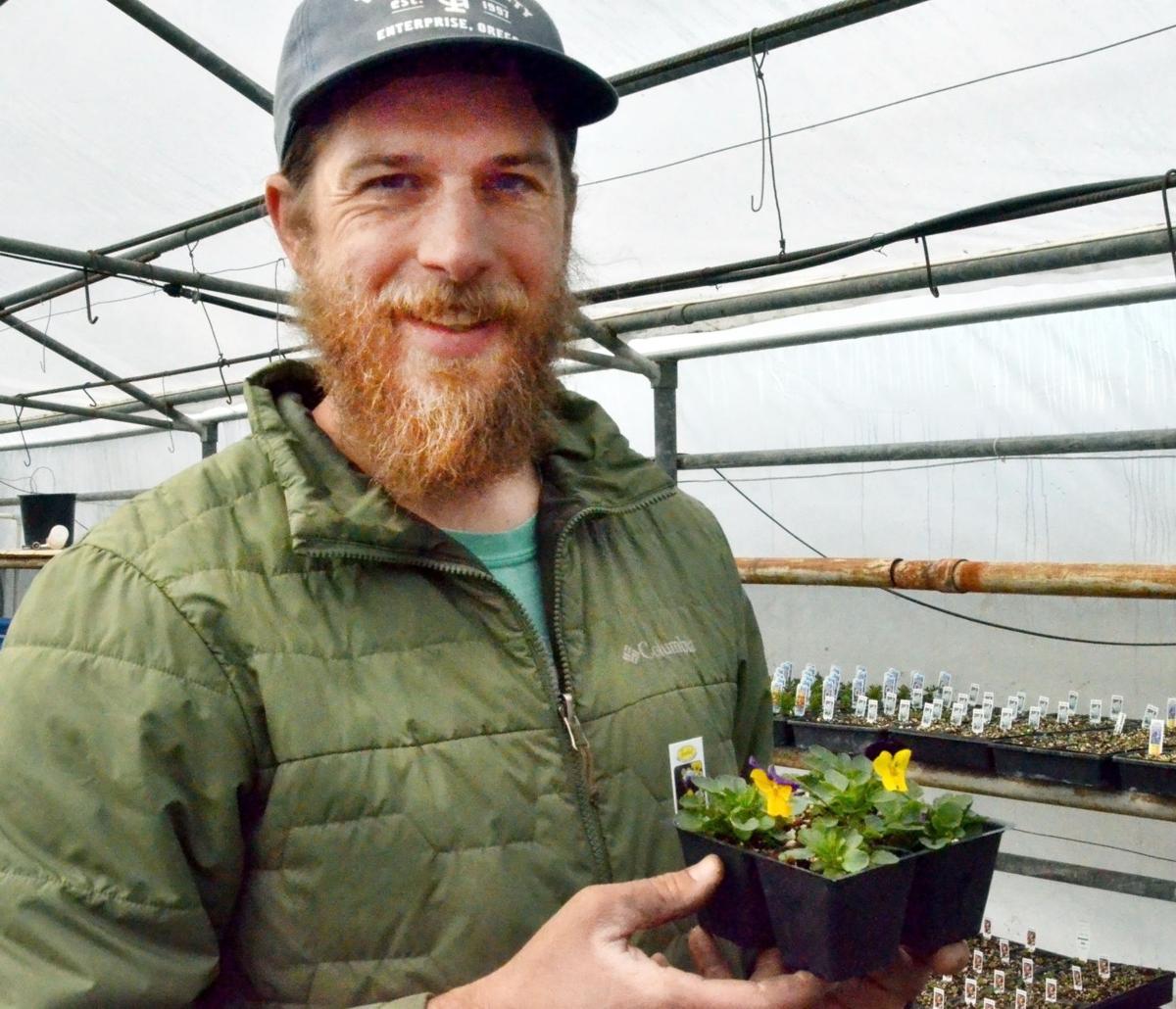 Nathan Slinker and some early-blooming pansies at Alder Slope Nursery.

Pansies brighten up the greenhouse at Walllowa County Nursery.

Irene Bates sets a tray of young lettuce plants into place among some of her other ready-to-grow vegetables at Wallowa County Nursery.

Infant tomatoes get a good start at Alder Slope Nursery. They won’t be sold to new homes until they are mature plants in gallon-sized pots, ready to produce.

Nathan Slinker and some early-blooming pansies at Alder Slope Nursery.

Wallowa County’s three nurseries—Wallowa County, Alder Slope, and The Flower Peddler are ready to help home gardeners and landscapers prepare for spring – once it finally arrives. In a time of COVID-19 closures, nurseries are open because they are deemed an essential business, providing fertilizers, potting soils, and other supplies for raising food as well as flowers.

That’s keeping their businesses operating and their employees working. All three nurseries can take orders over the phone and deliver at curbside so customers don’t need to worry about contact with staff. And while all three nursery owners said it might be a bit too early to plant outside, they all recommended starting seeds or nurturing young plants indoors. It’s also a great time to get rid of any remaining debris from last fall, and prepare beds for planting. It’s also a good time to plant trees in moist, workable soils.

Each nursery carries many varieties of trees, shrubs, vegetable starts and flowers. But each has their specialties as well.

With 24,000 square feet of greenhouses that simulate a warmer, moist climate, Terry and Irene Bates’ Wallowa County Nursery carries a huge variety of fruit, ornamental, and shade trees that they can over-winter well. He also carries nearly every type of plant Wallowa County growers would want. “Our nursery is dedicated to (helping plants) survive in Wallowa County,” he said.

Alder Slope nursery is also a full-service business. They carry the particular varieties of berries that grow well in the county. This includes raspberries, blueberries, strawberries and some blackberries. He said Wallowa County residents could also grow table grapes, and has red Candice grape vines in stock. “We have a whole nursery garden center,” Slinker said. “We try to do a bit of everything.”

At Wallowa’s Flower Peddler Nursery, Pam Harshfield has seeds, vegetable and flower starts. She will also take special orders and does custom planting. “If they want to bring containers, I can do that,” she said.

If its vegetables you’re after, there a plenty of starts and seed that you can put to use very soon.

For early spring planting, Irene Bates at Wallowa County Nursery suggested Swiss chard, cabbage, kale (she’s got two varieties), Brussels sprouts and cauliflower, all of which she has started as young plants in 4-packs. There’s also 2-year-old asparagus plants in larger pots that are ready to produce. “Herbs, including chives, parsley, and rosemary, are also good to plant early,” she said.

Nathan Slinker’s suggestions for early spring planting include snow peas and snap peas from seeds, beets, also from seeds (they mature in 45-60 days) as well as Napa cabbage and mustard greens, which he has as starts in small plant packs. For herbs, he recommended thyme, rosemary, tarragon, sage and mint. He’s also got apple, pear, plum and pie cherry trees, which he says produce good amounts of fruit in the Wallowa valley.

Tomatoes can be a challenge to grow in the Wallowa valley, he said. But Slinker has plenty of infant tomato plants started, including Early Girl (a favorite here), several varieties of cherry tomato, and Mortgage Lifter, an heirloom tomato from the Depression era that grows big and “….probably was someone’s idea of how they could sell enough tomatoes to pay off their mortgage,” Slinker said. All those tomato plants need to spend more time in the greenhouse before Slinker will let them go home with you. “They need to be bigger,” he said. “I’ll sell them in larger containers later when its warmer, they’re mature plants, and they’re ready to produce.”

At The Flower Peddler in Wallowa, Pam Harshfield recommends waiting a couple of weeks longer before planting a garden. But when people are ready, she’s got seeds, and will have plants, too. “Root crops seem to grow really well in the county,” she said. To that end, she’ll have three different varieties of onion sets and also recommends planting beets. “They seem able to get through a freeze without damage,” she said. She offers a wide variety of organic seeds from Territorial Seed Company, an Oregon seed grower, and this year will be selling seeds and some plants at Jill McClaran’s Simply Sandy’s store in Joseph when it opens. But Harshfield is also planning to start a seed and plant delivery service out of her Wallowa nursery. “It will probably be a once-a-week thing,” she said.

In Wallowa, Debra Reth is offering Territorial Seeds’ organic and heirloom seeds, organic seed potatoes and other Farmers Market items through the Resale Store. Until Oregon’s social distancing orders are rescinded, access is by appointment only.

“There’s something about growing things that gives us hope,” said Irene Bates. “And we need a lot of that now.”