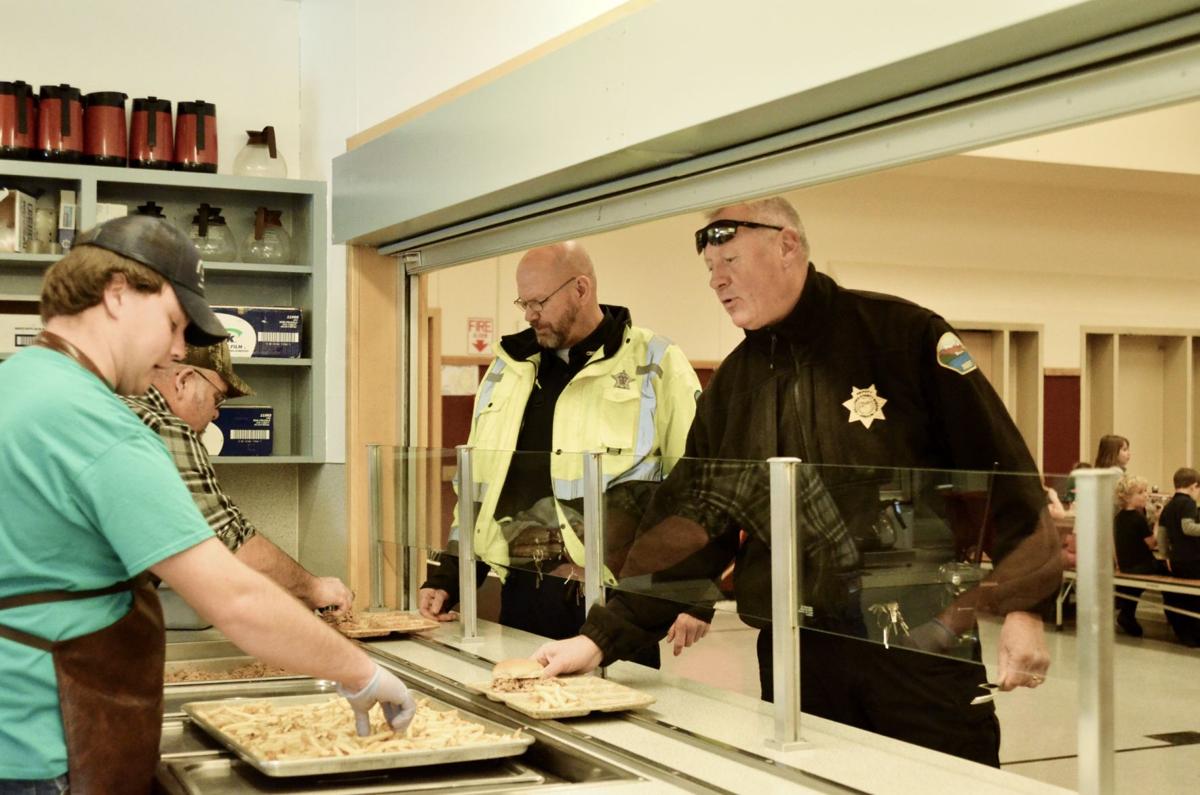 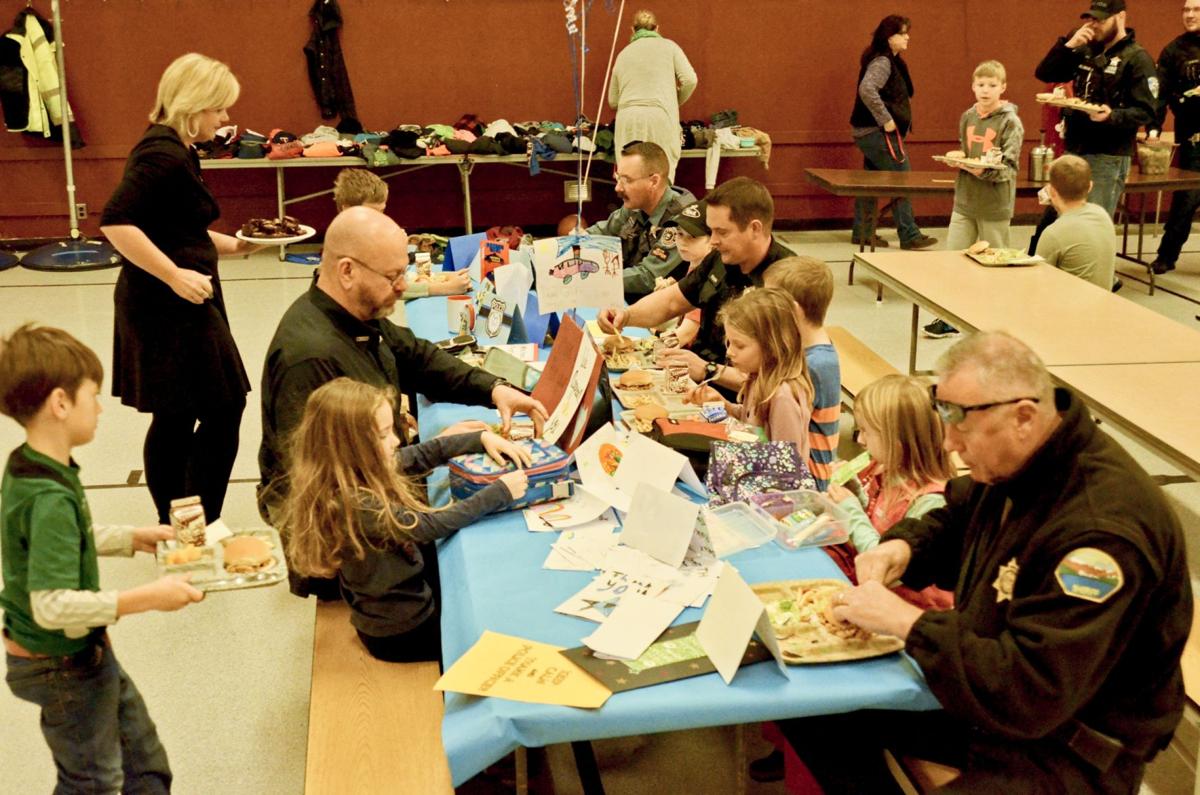 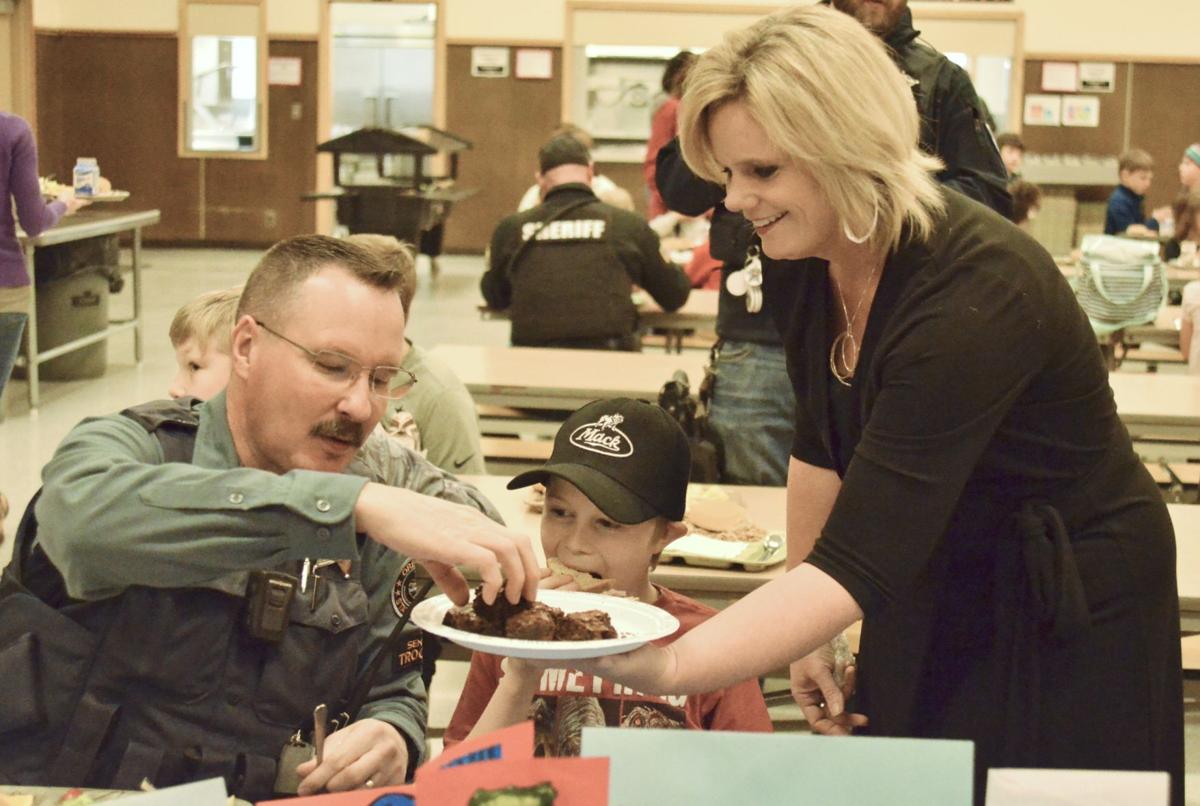 Visibility and developing positive relationships were on the minds of area law enforcement officers who visited and ate lunch with kindergarten through sixth-grade students at Enterprise Elementary School for National Law Enforcement Appreciation Day on Thursday, Jan. 9.

Officers representing the city of Enterprise, Wallowa County and Oregon State Police joined the kids for lunch and to receive artwork made by the students expressing students’ appreciation to the lawmen.

“The kids are saying thanks,” she said. “The kids respect police officers and we want to continue to enhance that.”

A regular presence at the school is one way the officers enhance that relationship.

“They have a really strong presence in our school and have a really good relationship, more than in any district I’ve ever worked in,” Pinkerton said.

She noted that officers often visit classrooms to tell students about their jobs and discuss relevant issues.

Pinkerton said this was the first year the school welcomed the officers for an appreciation luncheon and she plans to make this an annual event.

“I was talking with one officer’s wife and we did a brainstorm on how we could show our appreciation for Law Enforcement Appreciation Day,” Pinkerton said, with the luncheon and artwork being the outcome.

She said many officers are part of a school district safety committee and gave recommendations to the school board on how to make the campus safer. Such recommendations included:

• fencing to allow movement within campus.

• sensors on key doors to show when they’re open or closed.

Though these recommendations have not yet been implemented, they were passed on to the district’s long-range facilities planning committee to be included in a school bond. Pinkerton said the amount of the bond hasn’t been determined yet, but the district is also applying for Oregon School Capital Improvement Matching program (OSCIM) grant whereby the state would match up to $4 million approved by voters.

Lunch tables Thursday were adorned with cards, signs and other artwork expressing the youths’ thoughts on law enforcement officers. In addition to artwork from the grade-schoolers, works from secondary students also was on display, Pinkerton said.

“Real heros don’t wear capes,” were the words emblazoned on one large piece of red construction paper at a table of kindergarteners and first-graders. Misspellings aside, it was the thought that counted and the officers appreciated it.

Chief Fish looked carefully through many of the cards and planned to take them to the Enterprise department for officers to see who were unable to attend.

Students – some of whom said they wanted to be police when they grew up – expressed in words what they liked about the officers.

“They keep people from getting in car crashes,” 7-year-old second-grader Ava Butterfield said.

Six-year-old kindergartener Owen Polumsky was a little more blunt and down-to-earth about what he like about law officers.