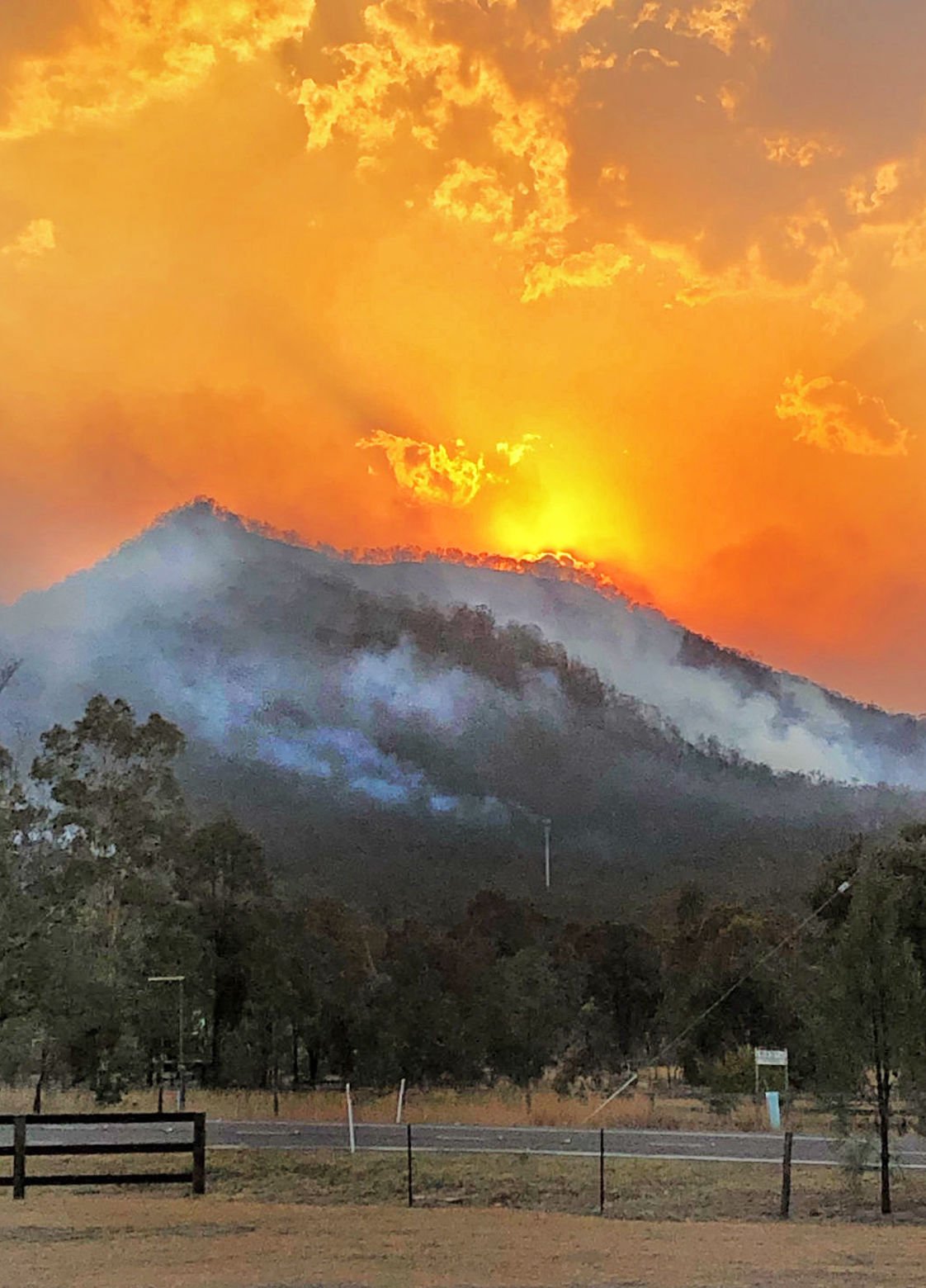 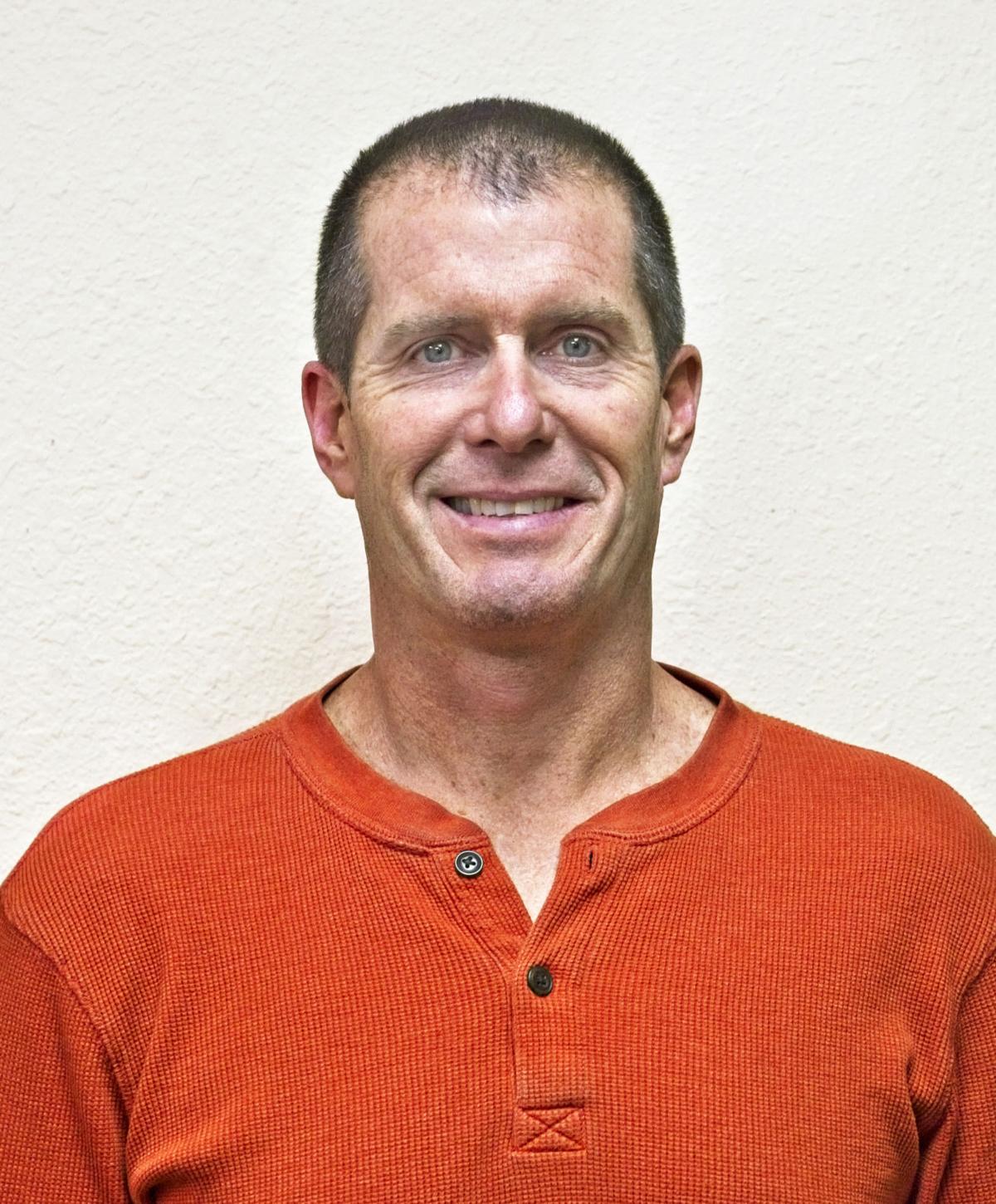 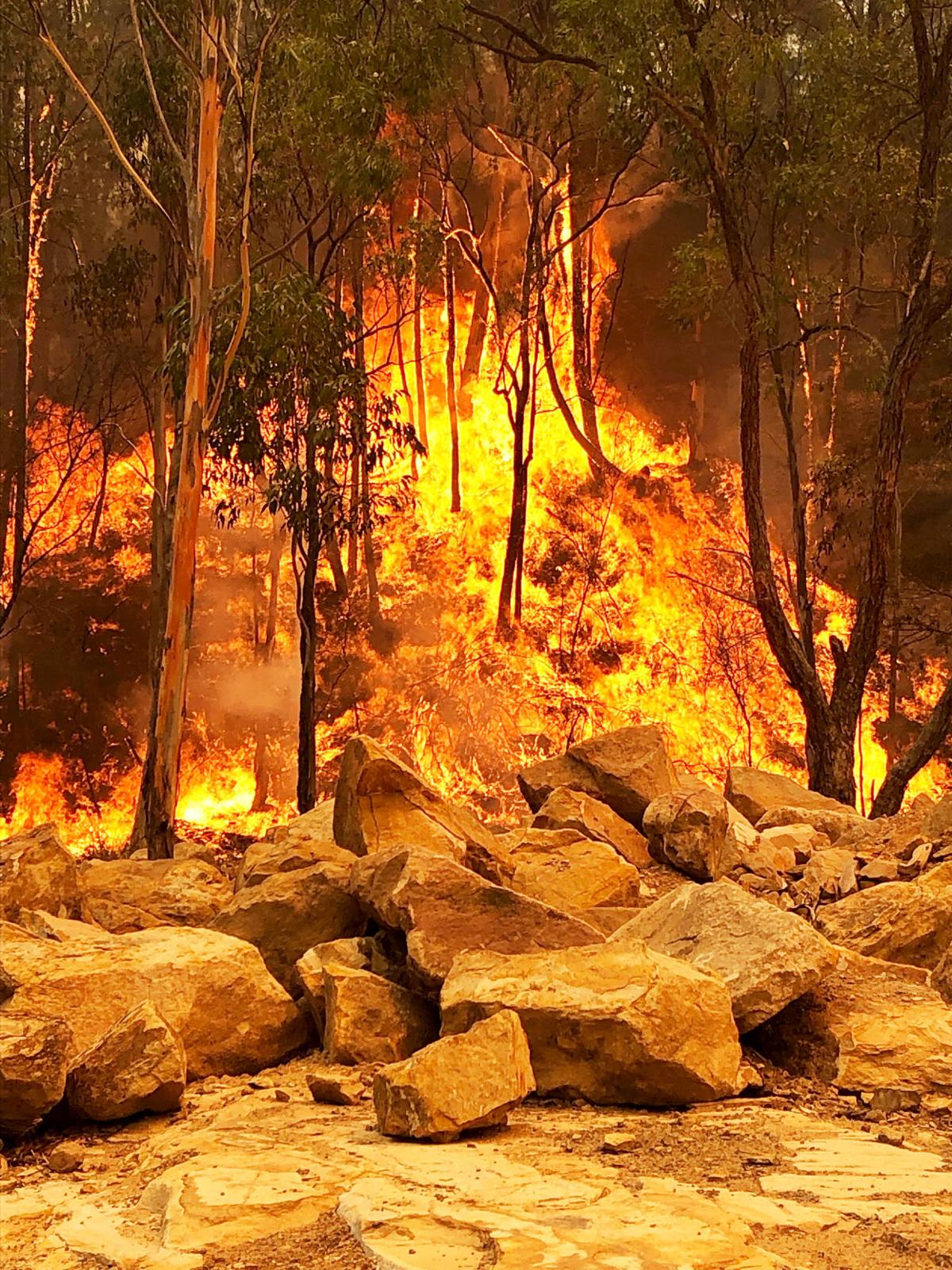 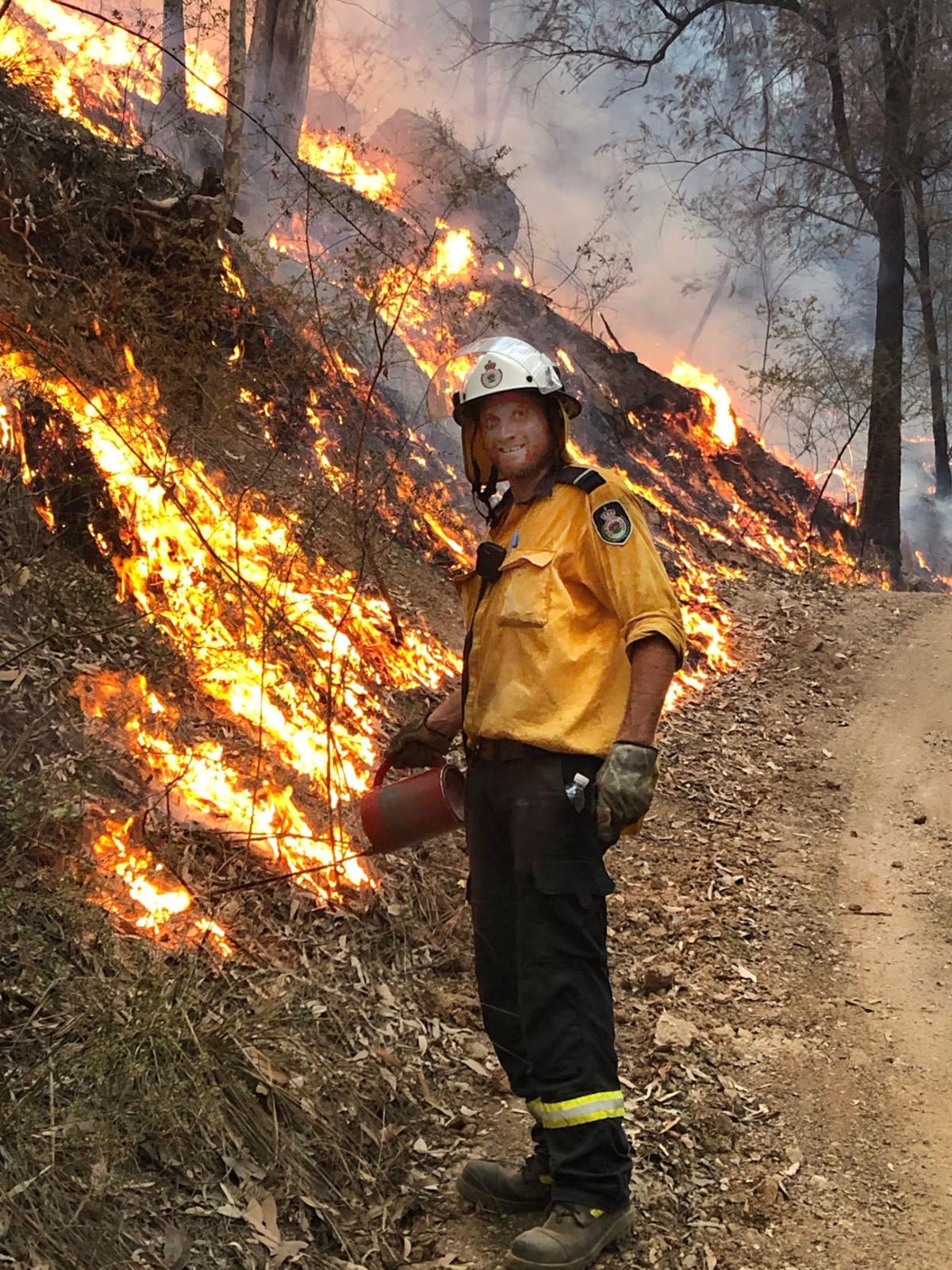 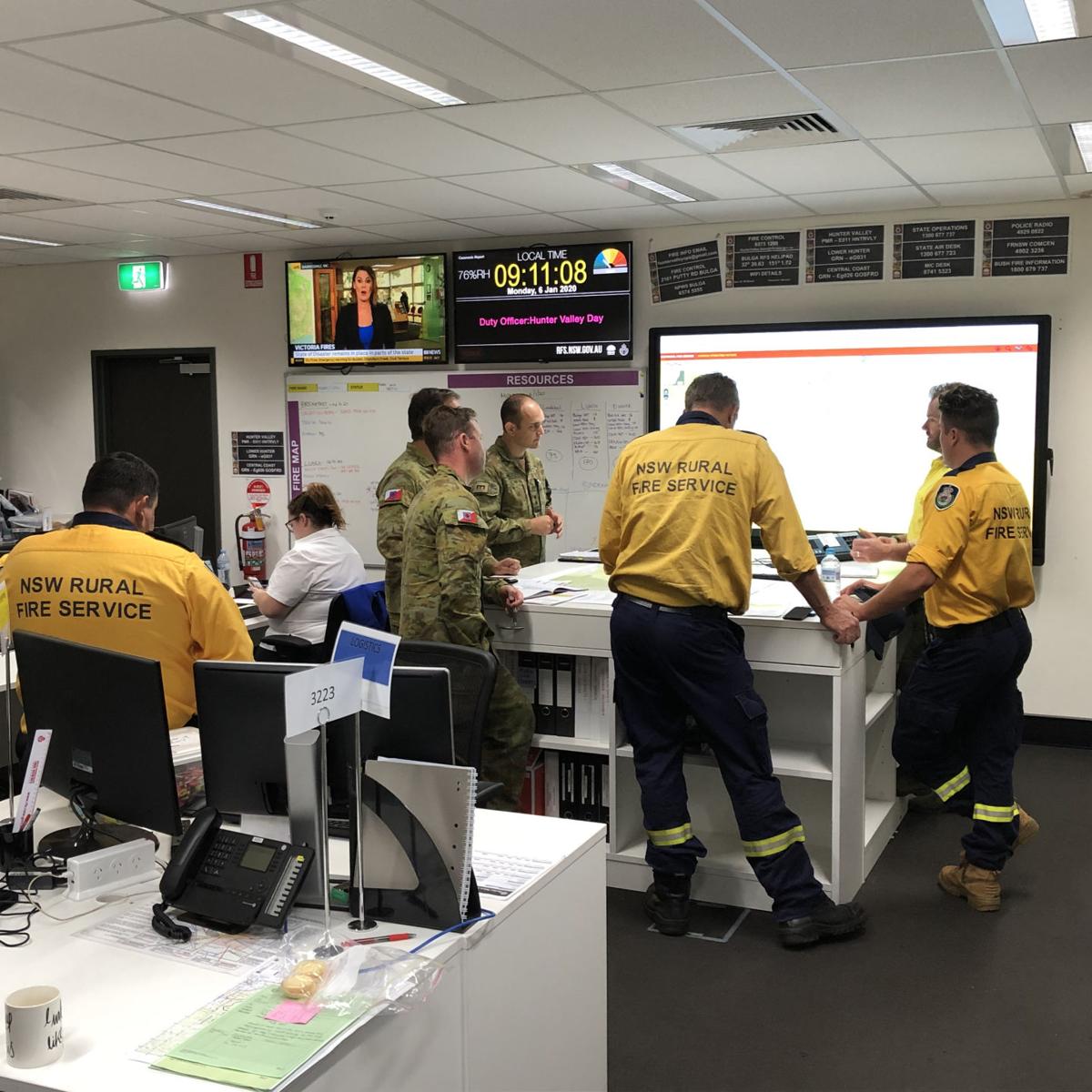 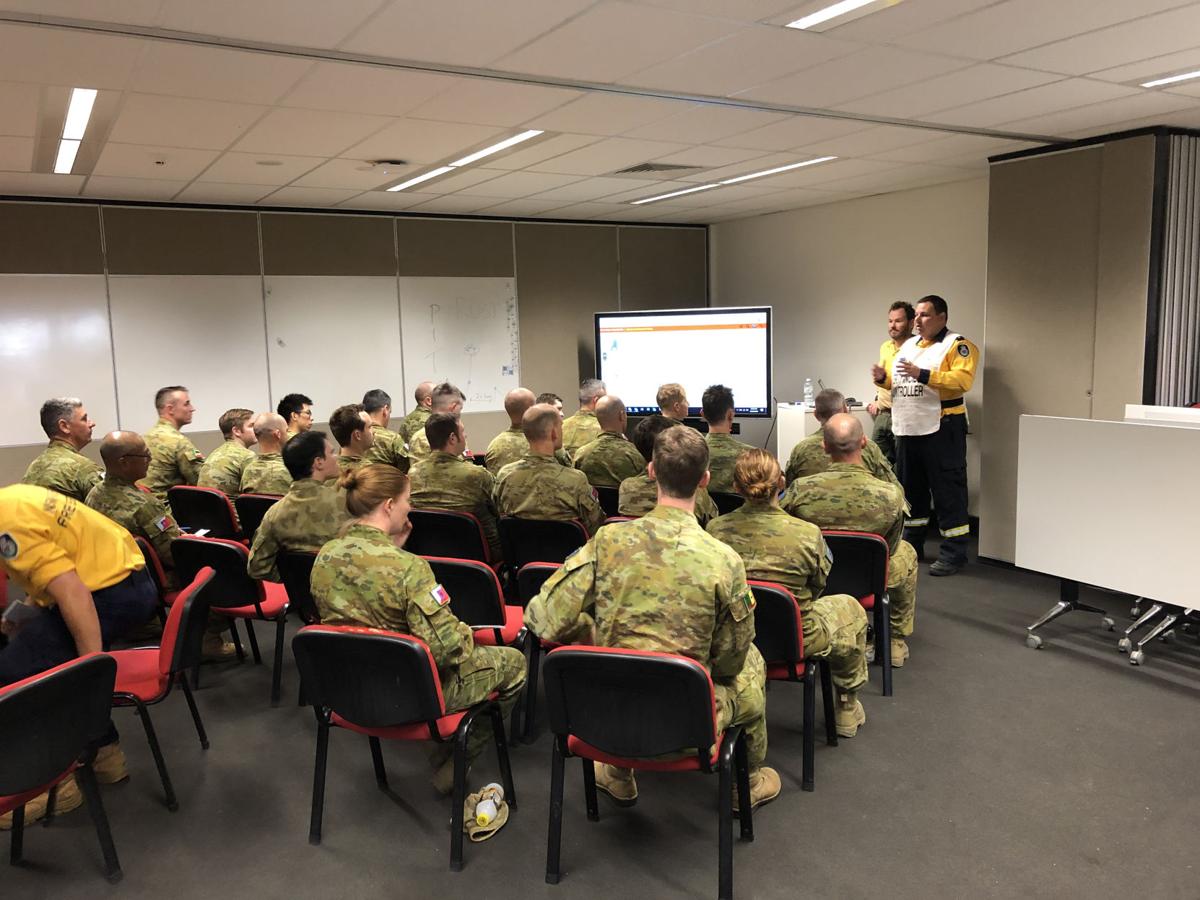 After a month of battling Australia’s devastating bush fires, Nathan Goodrich is back home in Wallowa County. The Wallowa Whitman National Forest Wallowa Zone fire manager was one of 21 USFS fire experts who helped Australia try to quench its seething landscape.

His work was part of an agreement among the U.S., Mexico, Canada, Australia and New Zealand to help one-another control large forest blazes. Goodrich, the fire management officer for the Wallowa Valley Ranger District, is based in Joseph.

Goodrich and the USFS team were dispatched to New South Wales, an Australian state that is bigger than Texas, but with a hilly and sometimes cliff-ridden landscape typical of Tennessee and the Appalachians. “It’s rolling hills that are heavily forested. The trees are mostly deciduous, and most of them are eucalyptus,” he said.

In Australia, Goodrich served as an operation section chief, a job similar to his work with the Forest Service. That included dispatching crews and resources as well as conduction suppression operations.

Along with a persistent drought and a past fire-suppression policy similar to ours, the trees themselves contribute to the intensity of the fires, Goodrich said.

Eucalyptus trees contain a lot of oil in their wood and even in their leaves. That makes their crowns burn easily. Their bark is thin and almost paper-like. When a groundfire sets it ablaze, flames can easily climb up the trunk and into the tree. The highly flammable crowns also send off a lot of burning debris, causing spot fires.

“This sort of flammability makes for a very short natural fire-return interval, and also makes the fires more difficult to control,” Goodrich said. “It’s more like the return interval for our grasslands (about 10 years here.)”

Fire suppression has produced a much more flammable landscape in Australia, just as it has in the U.S.

“The aboriginal people here managed their landscape in a way not unlike Native Americans,” Goodrich said. “When they left a place, or when the time was right, they would set a fire. Those fires burned mostly with low intensity. Now, after a century of suppressing fire, a lot of Australia has a fuels-surplus problem.”

In New South Wales, about 70,000 volunteers are signed up and available to fight fires, but fewer than 2,500 are actually working. You need a large pool of volunteers to draw from. The volunteers have jobs and other commitments. Paid firefighters in the Rural Fire Service number about 1,000. There are additional pros in other agencies that include Fire and Rescue, Forestry, and the Park Service, which is similar to our USFS.

Right now in New South Wales, there are 130 large fires burning, and perhaps 40 teams of about 10 to 20 volunteer and/or professional firefighters available.

“It’s a system that was born of the fire-brigade days,” he said. “It would be like Troy having a fire brigade, and Flora having one and there being one in each of all the little communities,” Goodrich said.

After the large fires of 1994, the Aussies formalized the Rural Fire Service for better oversight of the rural brigades.

“That means that each team has to fight multiple blazes,” Goodrich said. “They have to make choices and prioritize which ones to control, to keep away from structures or ignite back-burns, and which ones to just let go until more resources are available.”

Those necessary choices, he noted, may mean that the neglected fires can grow very large. Some of the Australian fires are huge — in excess of a million acres.

On days when the wind comes up, or temperatures are very high, there is a ban on burning of all kinds, including back-burning and even burning in your back yard.

“Fires move fast with the wind. There’s no good way to control them,” he said. “You just wait. You are on standby and ready to react to fires that might impact structures.”

Some of the present Aussie fires have scorched more than a million acres.

“In the U.S.,” Goodrich said, “we have a nationwide total of maybe 50 or 60 fires underway at a time, not the 130 large fires that are burning now just in New South Wales. There’s a team on every fire in the U.S. In our big fires — which are now considered to be 100,000 acres or more — we have 500 to 700 and sometimes more people fighting them. The Australians are managing more fires with less people than we would ever do.”

Fortunately, much of New South Wales’ interior is not densely populated.

“The houses are distributed a little like the landscape coming down from Ruby Peak to Alder Slope,” Goodrich said. “There’s forest. And then there are homes and small communities. Not many homes in the area are built in the urban-wildland interface.”

That helps minimize loss of human life and property. Nor did Goodrich witness many animals deceased or in grave trouble.

“The wildlife all seem to have fled the forest,” he said. “With the drought, there’s little food or water there, and so animals have generally moved to farmland and open areas where they have more resources.”

But things are different closer to the New South Wales’ more-densely populated coast.

“That’s where there are more koalas that move slowly and might try to take refuge from the fires in the treetops,” he said. “It’s also where people have built homes in forests. There ‘s much more of an urban-wildland interface problem there.”

Overall, Goodrich found that the Aussies he worked with managed to keep a positive and often cheerful attitude about things, even when their landscape is in flames. He admires Australia’s national fire plan, which he feels has saved lives and provides an orderly and practiced way for people who live in fire-prone areas to respond to the threats of fires.

“The national system was developed after the 2009 Black Saturday Fire,” he said. “More than 100 people died because they waited too long in their attempts to escape the fire and then the roads were clogged, and they could not evade the flames.”

Today, Australians have fire drills, and practice understanding and responding to three levels of alert: 1. Warning. 2. Waiting to act and 3. Going.

“Each person or family has an assigned escape route to help avoid congestion and peril. It’s all well rehearsed,” he said.

“The Aussies are really technically advanced,” Goodrich said. “They have a nationwide text-alert system, a social media process and other means of communication. I would like to see a similar ‘national system’ here in the States rather than one that varies from state to state, county to county.”

Now that the first group of USFS fire officers has returned, a new group will be going from Region 6. They include Todd Peterson from the Joseph USFS office, and others from the WWF and Region 6.

Goodrich would gladly go back to Australia, though he would rather do it as a vacationer than a fire officer.

“It’s a wonderful and really diverse, amazing place,” he said.