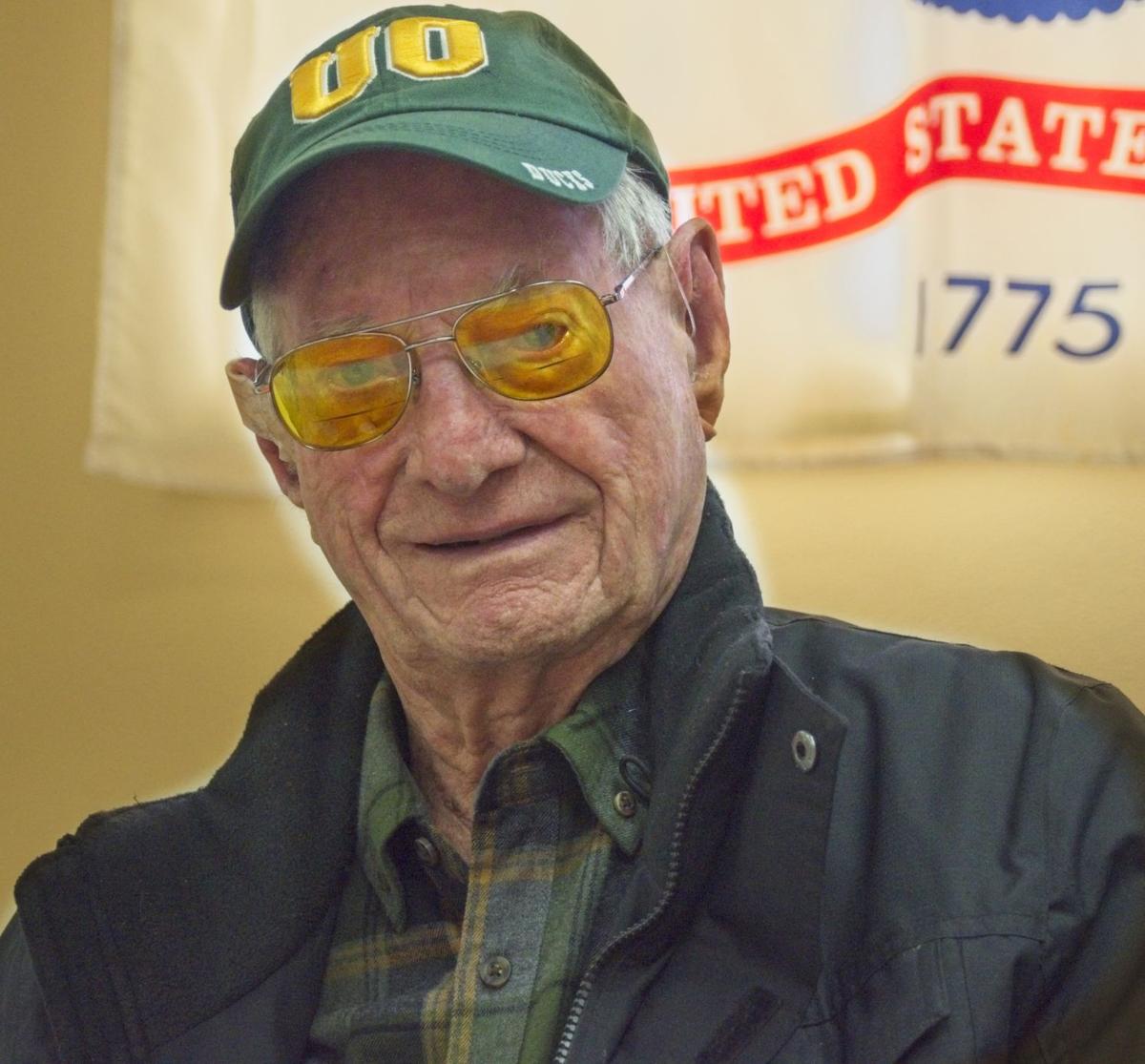 World War II Navy veteran Harold Lay relaxes after enjoying a veterans breakfast at the VFW Hall in Enterprise. Lay was wounded while serving as a Higgins Boat operator during the Battle of Peleliu during the island-hopping campaign as U.S. forces recaptured islands from the Japanese. 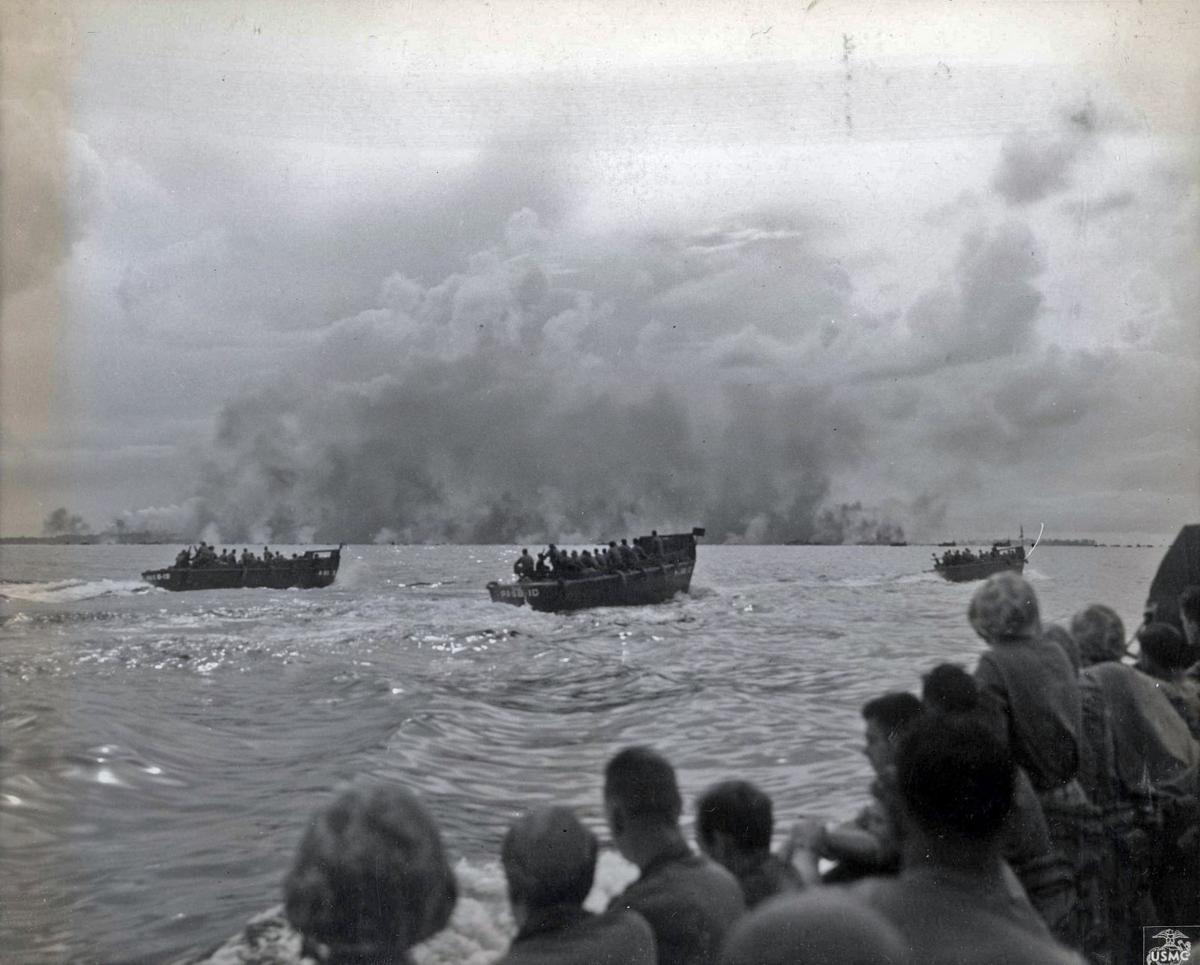 World War II Navy veteran Harold Lay relaxes after enjoying a veterans breakfast at the VFW Hall in Enterprise. Lay was wounded while serving as a Higgins Boat operator during the Battle of Peleliu during the island-hopping campaign as U.S. forces recaptured islands from the Japanese.

At the helm of a landing craft known as a Higgins Boat, 22-year-old U.S. Navy Coxswain 3rd Class Harold Lay almost routinely helped land members of the 1st Marine Division on Peleliu Island in one of the most costly battles of the “island-hopping” campaign in World War II.

That was in September 1944. On Monday, Nov. 11 — Veterans Day — Lay and 40 to 50 other Wallowa County veterans were honored with a free breakfast at the Veterans of Foreign Wars hall in Enterprise.

He recalls being largely left to his own devices, going where needed, be it to land more Marines and supplies or return wounded troops to ships where they could receive treatment.

“You’re kind of on your own out there,” he said.

Then it came Lay’s turn.

Japanese shellfire from the island struck his boat and he was wounded in the hip by shrapnel. Today, he shrugs if off.

He was evacuated for treatment and recovery in hospitals in New Caledonia and Guadalcanal.

“It took about a month before I could walk again,” he said. “It still bothers me today.”

He said that although he could receive additional treatment at a Veterans Administration hospital, he’d have to go to Portland or Seattle.

Looking back on his wartime experience, Lay recalled there was never any question about enlisting.

“All my friends were going in,” he said. “You just thought it was the thing to do.”

So that’s what he did at age 19 and has never regretted it.

He does recall — briefly — considering joining other branches.

“I asked one guy why he joined the Navy and he said he didn’t want to walk,” a rationale that made sense to Lay. “I thought it was either sink or swim.”

That, and the duty he found himself performing.

“I just enjoyed running a boat,” he said. “It was good duty.”

Since the war, Lay has had no desire to operate a boat again.

“If I go fishing, I’ll go with somebody else,” he said.

“A guy asked if I wanted to transfer and I asked where. He said Peru. I thought Peru, South America wouldn’t be a bad place to spend the war, but it didn’t turn out that way. He meant Peru, Ind., which was right near Naval Air Station Bunker Hill,” Lay said. “I never volunteered for anything again.”

Born in Stanfield, Lay was just 12 when his family moved to Enterprise. Here, he met Cecile Quinn, whom he married once he returned from the Navy in 1946. He worked as the Enterprise postmaster from 1949 to 1979, when he retired.

The Lays spent much of the next 24 years traveling and spending winters in Yuma, Ariz., They remained married until Cecile Lay died in 2009. Their daughter, Sharm Daggett, has a son and a daughter and Lay has one great-grandchild.