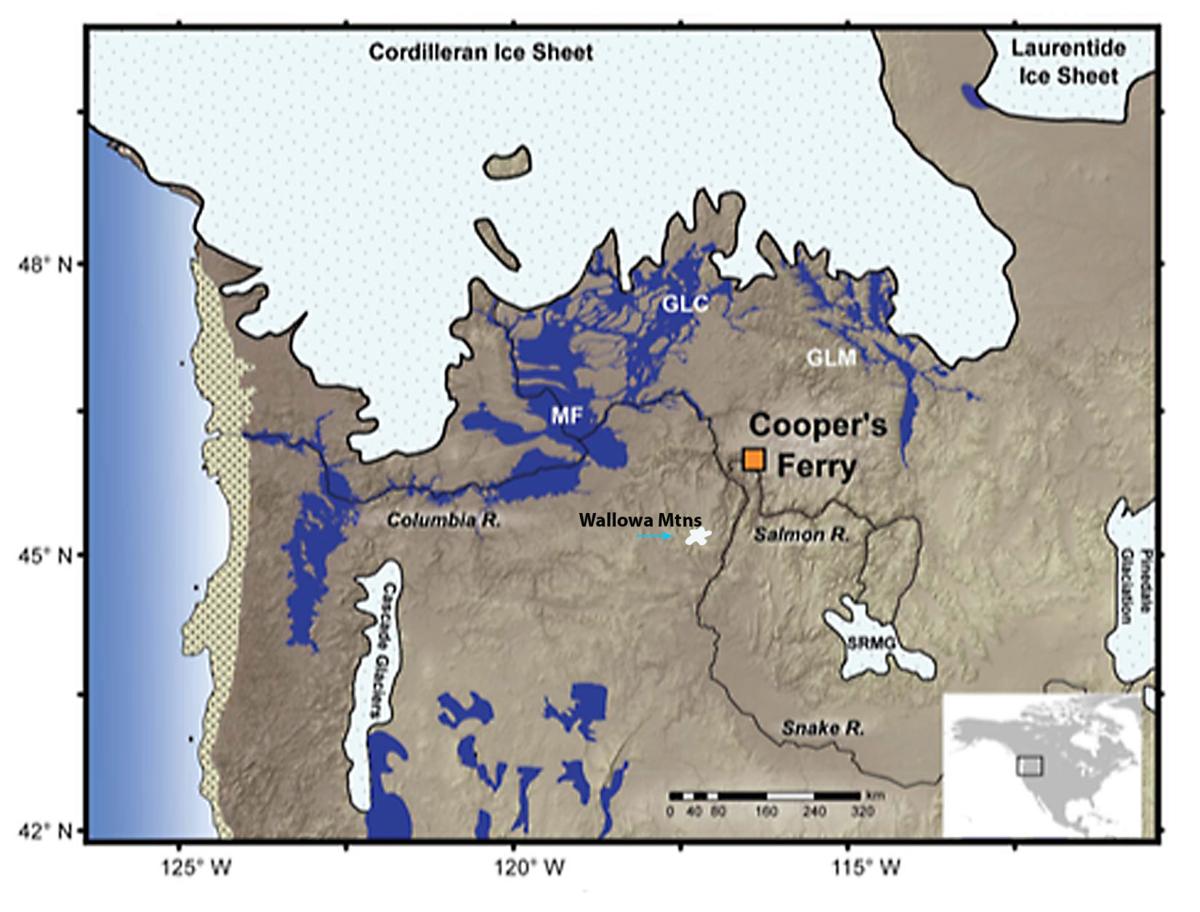 TheNorthwest 16,000 years ago and location map for the Cooper’s Ferry site. At 16,000 years ago, glaciers occupied most of Canada, the largest Missoula floods and the Bonneville flood through Hells Canyon had not yet happened, and the Wallowas still wore their ice cap. Projected regional environmental aspects at ~16,000 cal yr B.P. are based on probable extents of Cordilleran and Laurentide glacial ice at 16,000 years ago, Cascade and Salmon River mountain glaciers (SRMG), Pinedale glaciation extents, positions of Glacial Lake Missoula (GLM) and Glacial Lake Columbia (GLC), the modeled path of the Missoula Flood (MF) and its impoundment pool, smaller northern Great Basin pluvial lakes, and shoreline extents along the Pacific outer continental shelf (shown as a tan dotted area at left). 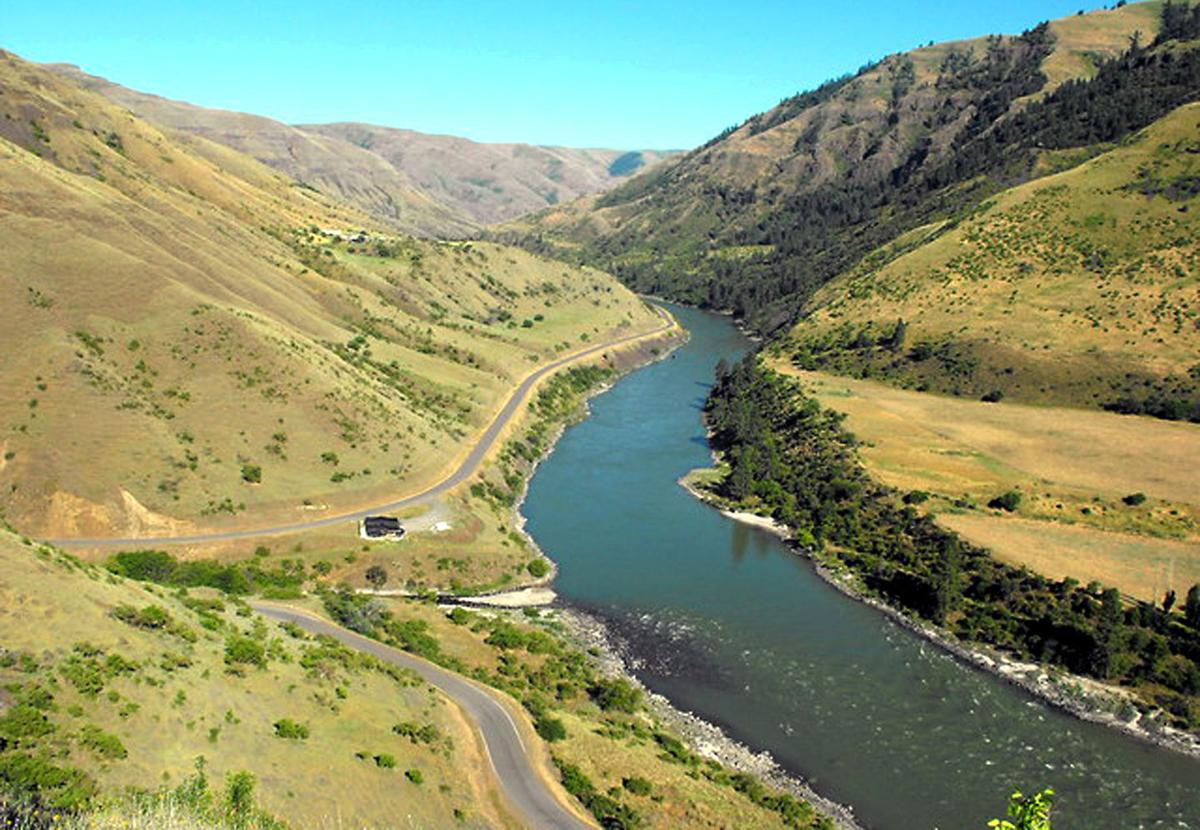 The Nipéhe/Coopers Ferry area along the Salmon River, Idaho.

TheNorthwest 16,000 years ago and location map for the Cooper’s Ferry site. At 16,000 years ago, glaciers occupied most of Canada, the largest Missoula floods and the Bonneville flood through Hells Canyon had not yet happened, and the Wallowas still wore their ice cap. Projected regional environmental aspects at ~16,000 cal yr B.P. are based on probable extents of Cordilleran and Laurentide glacial ice at 16,000 years ago, Cascade and Salmon River mountain glaciers (SRMG), Pinedale glaciation extents, positions of Glacial Lake Missoula (GLM) and Glacial Lake Columbia (GLC), the modeled path of the Missoula Flood (MF) and its impoundment pool, smaller northern Great Basin pluvial lakes, and shoreline extents along the Pacific outer continental shelf (shown as a tan dotted area at left).

The Nipéhe/Coopers Ferry area along the Salmon River, Idaho.

The oldest known human habitation in North America, more than 16,000 years in age, is located at the site of an ancient Nez Perce village known as Nipéhe, near the confluence of the Snake and Salmon Rivers. Oregon State University anthropologist Dr. Loren Davis and colleagues have dated animal bones and charcoal at the site, also known as Coopers Ferry, to 16,560 years ago. The Nez Perce Tribe participated in the excavations.

“Nipéhe is an ancient village founded by a young couple after a flood destroyed their previous home," said Nakia Williamson, the Nez Perce tribe’s director of cultural resources. “Our stories already tell us how long we’ve been here. … This [study] only reaffirms that. This is not just something that happened 16,000 years ago. It’s something that is still important to us today.”

The oldest North American known sites previously recognized include Paisely Caves in southeast Oregon, dated at about 14,000 years, the Galt site in Texas, dated at 16,000 years, but by a less precise method than Davis used, and another site in Pennslyvania which claims a 16,000 year date, but is controversial due to possible contamination of the dated material.

Davis’ research is especially important because it supports the idea that the first peoples who arrived in North America came via a coastal route, rather than an ice-free corridor through central Canada which did not open until about 14,800 years ago. The idea of the first human migrations into North America through this central-Canada corridor has faded with the discovery of dates older than 14,000 years for archeological sites.

And there is one more compelling argument for arrival via a coastal route. The carefully crafted projectile points found at Nipéhe/Cooper's Ferry are near-matches for points produced and used at the same time in Japan.

“The age, morphology, and technology of Cooper’s Ferry LU3 artifacts share notable similarities with the projectile point traditions dated from ~16,000 to 13,000 cal yr B.P. in Japan,” Davis notes in his paper. Davis and his colleagues also concluded that the age and forms of these tools suggest a cultural connection with northeastern Asia, which, he says “complements current evidence of shared genetic heritage between late Pleistocene peoples of northern Japan and North America.”

Importantly, the tools found at Nipéhe/Coopers Ferry were manufactured right there, on-site, and are truly North American-made. They were not imports, or tools transported by these hunters from a Japanese site. Davis and his team found multiple flakes that were produced during the manufacture of the points at the site. Or, as he writes, “Lithic tool maintenance is reflected by a burination flake bearing an exhausted unifacial working edge (fig. S6U) and by an igneous toolstone chopper tool edge rejuvenation flake. Artifact 73-61176 is an early-stage bifacial overshot thinning flake discovered in situ with a finely faceted bifacial platform and distal termination that removed a square edge from an opposing tool margin.”

In addition to providing the oldest known human habitation in North America, the site has also revealed a long history of human occupation, from about 8,300 to 16,560 years ago. The range and sources of dates include charcoal from hearth fires dating to about 9,000 to 9,250 years before present, bone fragments dated from 8,300 years BP to 16,560 BP and charcoal dating from 8,300 to 15,945 years BP.

There were horses in the landscape in those days. Bone fragments and one partial tooth (all undated so far) indicate the presence of an extinct North American horse, of unknown species. Unfortunately, the fragments were found among other large mammal bones at a site that Davis interprets as a “food processing station.” The age of the horse tooth is probably between 14,400 and 15,000 years, Davis notes.  These tooth fragments, along with the site’s ancient dates, mean that Nipéhe/Cooper’s Ferry is the oldest radiocarbon-dated site in North America that includes clear cut evidence that humans hunted and consumed horses, Davis said.

Davis’ work at the Nipéhe /Coopers Ferry site began in the 1990’s as an archeologist for the BLM. Recognizing its probable antiquity and importance, in 2009 he established the Oregon State University archeology field camp there. Students and faculty have been slowly uncovering the past ever since. In 2017, members of the Nez Perce tribe began participating in the research.

“Prior to getting these radiocarbon ages, the oldest things we’d found dated mostly in the 13,000-year range, and the earliest evidence of people in the Americas had been dated to just before 14,000 years old in a handful of other sites,” Davis said. “When I first saw that the lower archaeological layer contained radiocarbon ages older than 14,000 years, I was stunned but skeptical and needed to see those numbers repeated over and over just to be sure they’re right. So we ran more radiocarbon dates, and the lower layer consistently dated between 14,000-16,000 years old.”

The dates from the oldest artifacts challenge the long-held “Clovis First” theory of early migration to the Americas, which suggested that people crossed from Siberia into North America and traveled down through an opening in the ice sheet near the present-day Dakotas. The ice-free corridor is hypothesized to have opened as early as 14,800 years ago, well after the date of the oldest artifacts found at Cooper’s Ferry, Davis said.

“Now we have good evidence that people were in Idaho before that corridor opened,” he said. “This evidence leads us to conclude that early peoples moved south of continental ice sheets along the Pacific coast.”

Exactly how long ago that might have been remains unknown. Encampments along the coast would have been submerged as glacial melt drove sea levels higher. The Columbia River, and Columbia River basin, as Davis noted, would have been “the first off-ramp of a Pacific coast migration route.” It is likely that the inhabitants of Nipéhe/Cooper’s Ferry were not the first people to explore and inhabit the river valleys of the Columbia basin. But much of the evidence of possible earlier habitations along those rivers was likely erased by late Pleistocene Ice Age Missoula floods that persisted until about 15,000 years ago and the single Bonneville flood that raged down the Snake River 15,500 years ago. It is fortunate that the ancient Nipéhe/Cooper’s Ferry encampment was high enough to avoid the Bonneville’s floodwaters.