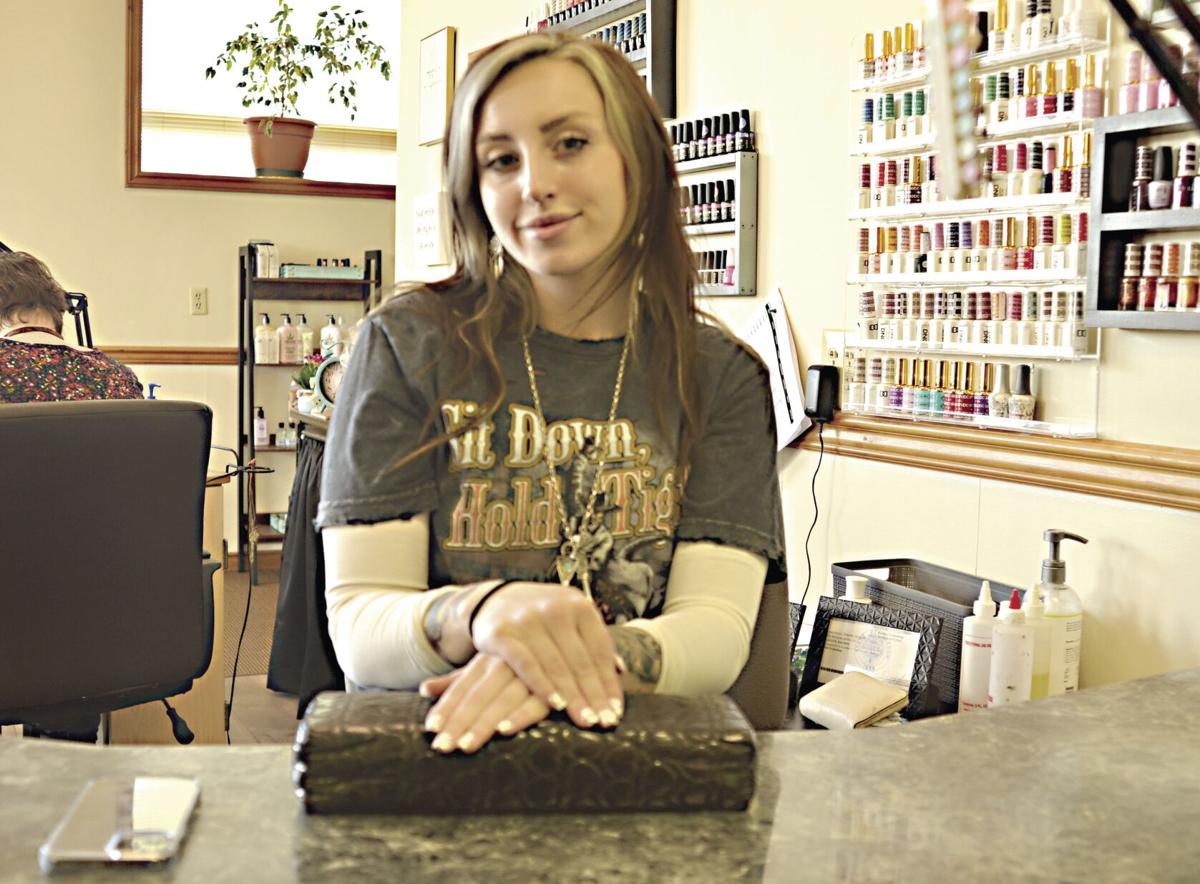 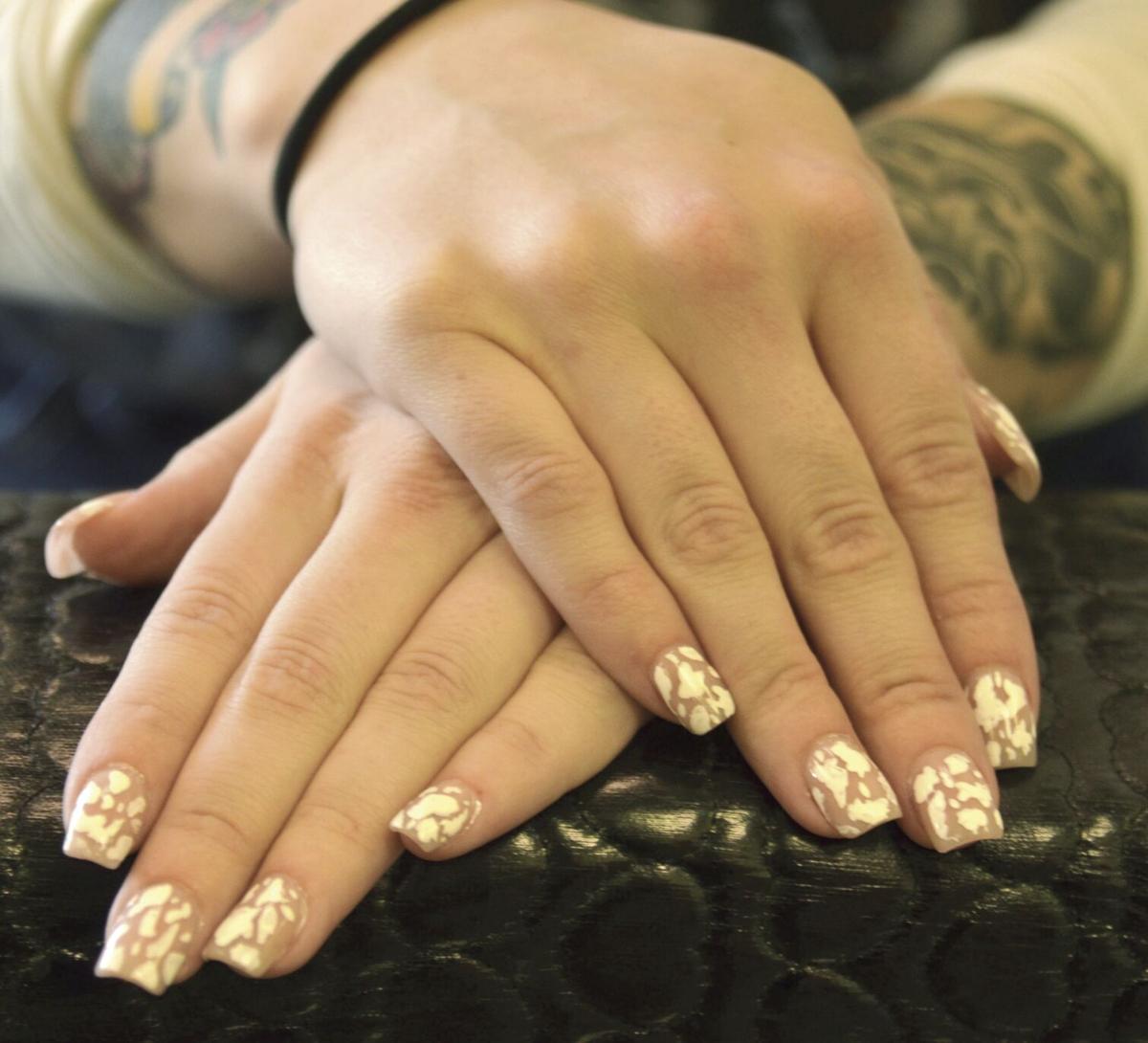 Dajah LaFave shows the designs she’s applied to her own nails Thursday, April 8, 2021, at her new establishment, Eastern Oregon Nail Co., from the space she rents at Belle Salon in Enterprise. 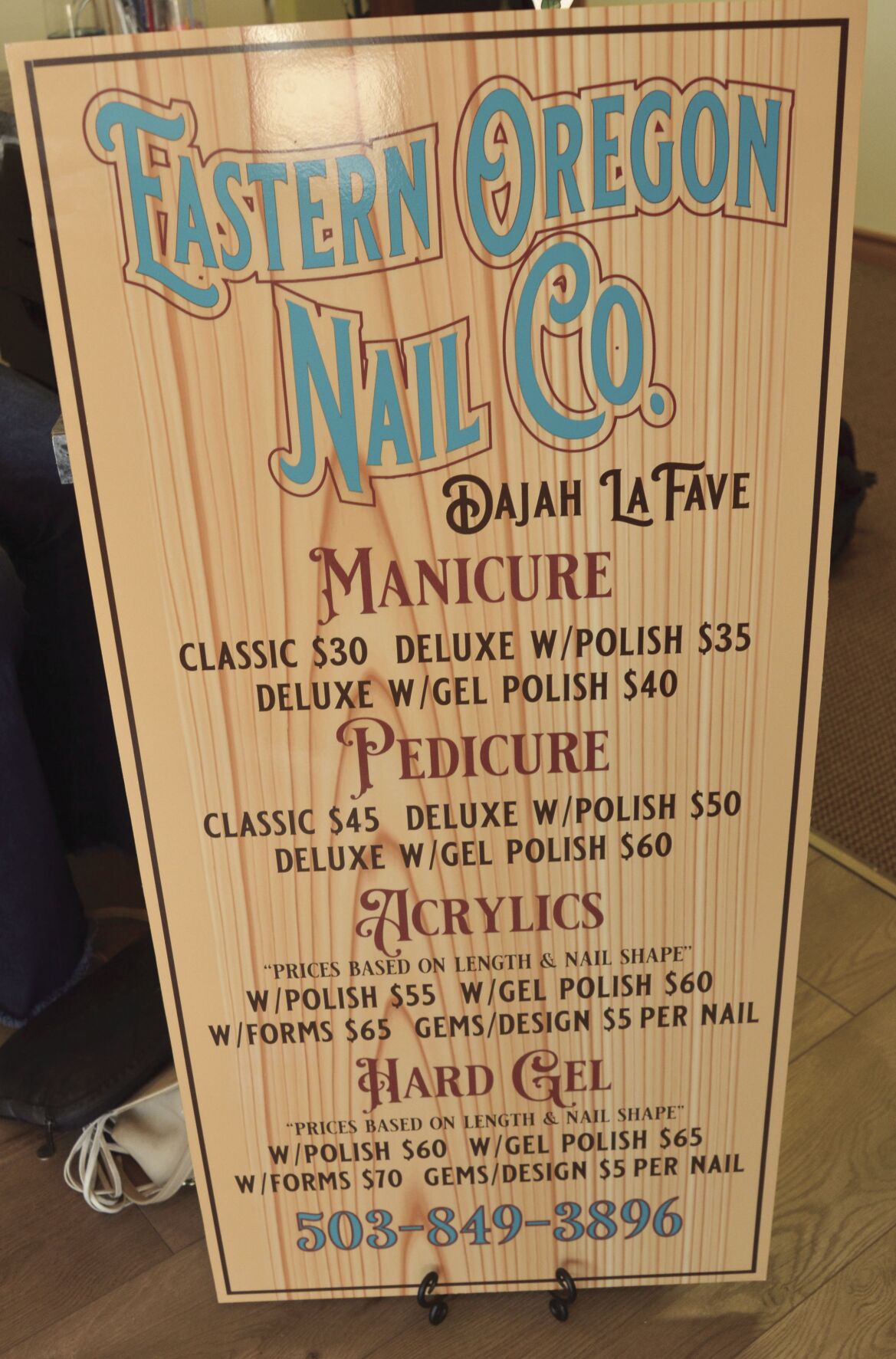 A “menu” board of services and charges stands at Dajah LaFave’s stall in Belle Salon in Enterprise on Thursday, April 8, 2021. LaFave opened her business Tuesday, April 6.

Dajah LaFave shows the designs she’s applied to her own nails Thursday, April 8, 2021, at her new establishment, Eastern Oregon Nail Co., from the space she rents at Belle Salon in Enterprise.

A “menu” board of services and charges stands at Dajah LaFave’s stall in Belle Salon in Enterprise on Thursday, April 8, 2021. LaFave opened her business Tuesday, April 6.

ENTERPRISE — Dajah LaFave saw a need in Enterprise and set up a Eastern Oregon Nail Co. to meet it.

She only recently learned that despite numerous beauty regimens available here, no one did “fake” nails. By “fake,” she clarified that means acrylic nails or nail extensions, in addition to a regular manicure of one’s natural nails.

She said that last year, her parents had the opportunity to buy a bed and breakfast in Imnaha and encouraged her to check out Wallowa County.

“They were, like, ‘Oh, the atmosphere here is so amazing,’ so I decided to check it out and I found out nobody down here does (fake) nails,” she said. “When I heard nobody here was doing fake nails, I thought my business would do well here.”

She said that when she posted her opening on Facebook, response was overwhelming.

“The response I got was just insane. I booked 25 people last night,” she said Thursday, April 8. “I got home and when my phone got service, it was like, ‘ding, ding, ding, ding,’ people wanting to get their nails done. I’m going to do so well. I’m so excited to be able to meet everybody here and get to know the community. Everybody here knows everybody.”

But, she said, it’s more than just about doing business — it’s about becoming part of the community.

LaFave had been operating a business in Forest Grove, near Portland before coming to Enterprise. Her dad, Rick LaFave, recently moved his welding and fabricating shop, Renaissance Design Fabrication and Powder Coating from Forest Grove. Her mom, Carey LaFave, is a stay-at-home mom.

“I have a ‘wiener dog’ named Oscar Meyer Wiener and a pit bull named Thor,” she said, but otherwise, she’s single.

After a stint at cosmetology school — Bella Institute in Beaverton — that was dragged out from four to six months because of the COVID-19 pandemic, she got her nail technician license and set up shop in Forest Grove.

In addition to acrylic nails, LaFave does regular manicures, overlays and forms, which are filled with a liquid product that can be shaped.

“I’m really big on designs, so I do a lot of them,” she said. “There’s tons of other things you can do. I do pedicures and feet rubbing. There’s also hard gels, like acrylics. For me, personally, it’s better for my nails … it doesn’t do as much damage to them. But it just depends.”

Shop owner Amy Anton was eager to have another nail tech in her establishment.

“There’s a need for it. We’ve been having a lot of calls and unfortunately, we’re only one person and can only do so much and have a pretty full clientele,” Anton said. “Having Dajah come in and ask to work was pretty awesome. We’re pretty excited. We’re trying to do everything we can to help her out and get her going and she’s doing pretty well on her own. I think she’s going to do pretty well.”

But she urges potential customers to call soon for an appointment.

“Book soon, because people are coming left and right and I’ll probably be full,” she said.