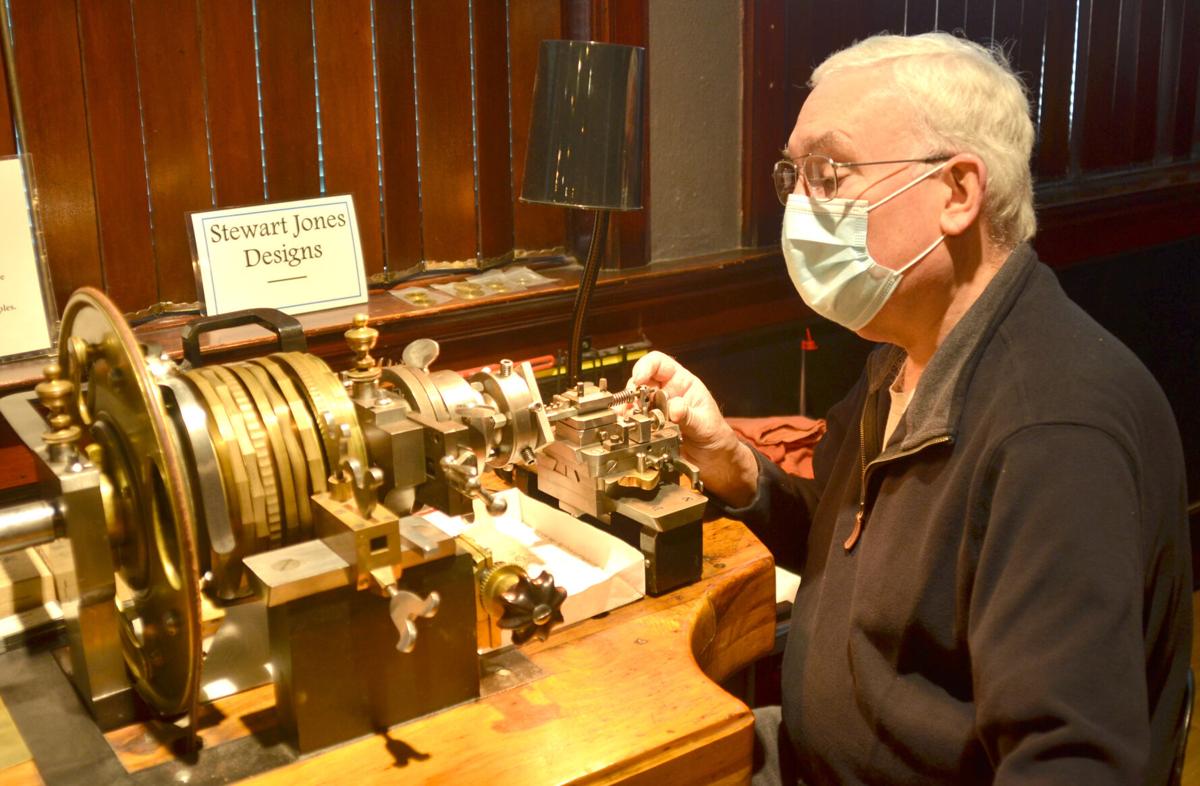 Stewart Jones, of Stewart Jones Designs in Joseph, demonstrates the precision work that can be accomplished on a hand-poweered 1860 Swiss Rose metalworking lathe that he regularly uses. 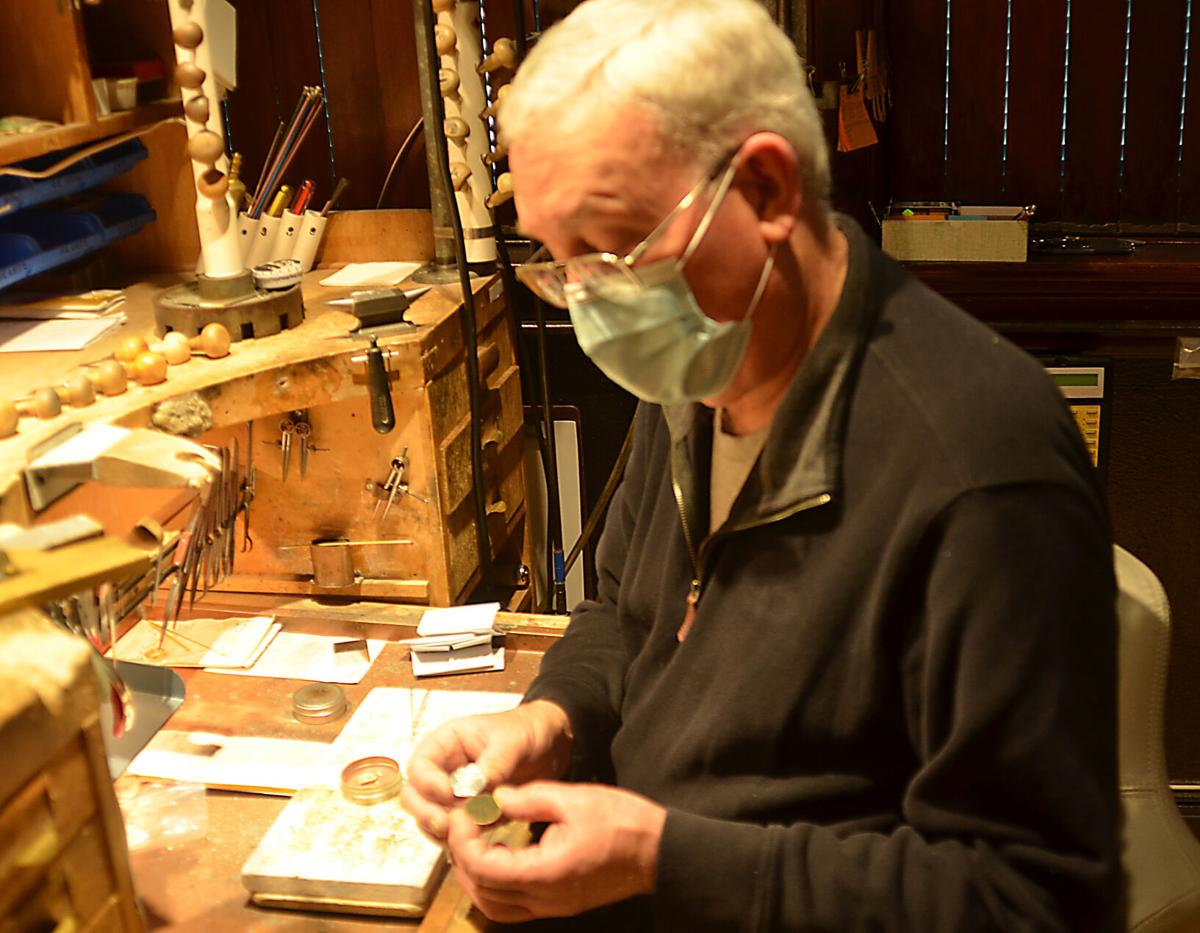 Jeweler Stewart Jones, of Stewart Jones Designs in Joseph, shows a piece he was working on Thursday, Dec. 31, 2020, at his shop. He and wife Catherine Matthias will close the downtown shop in February and move it to their home north of town. 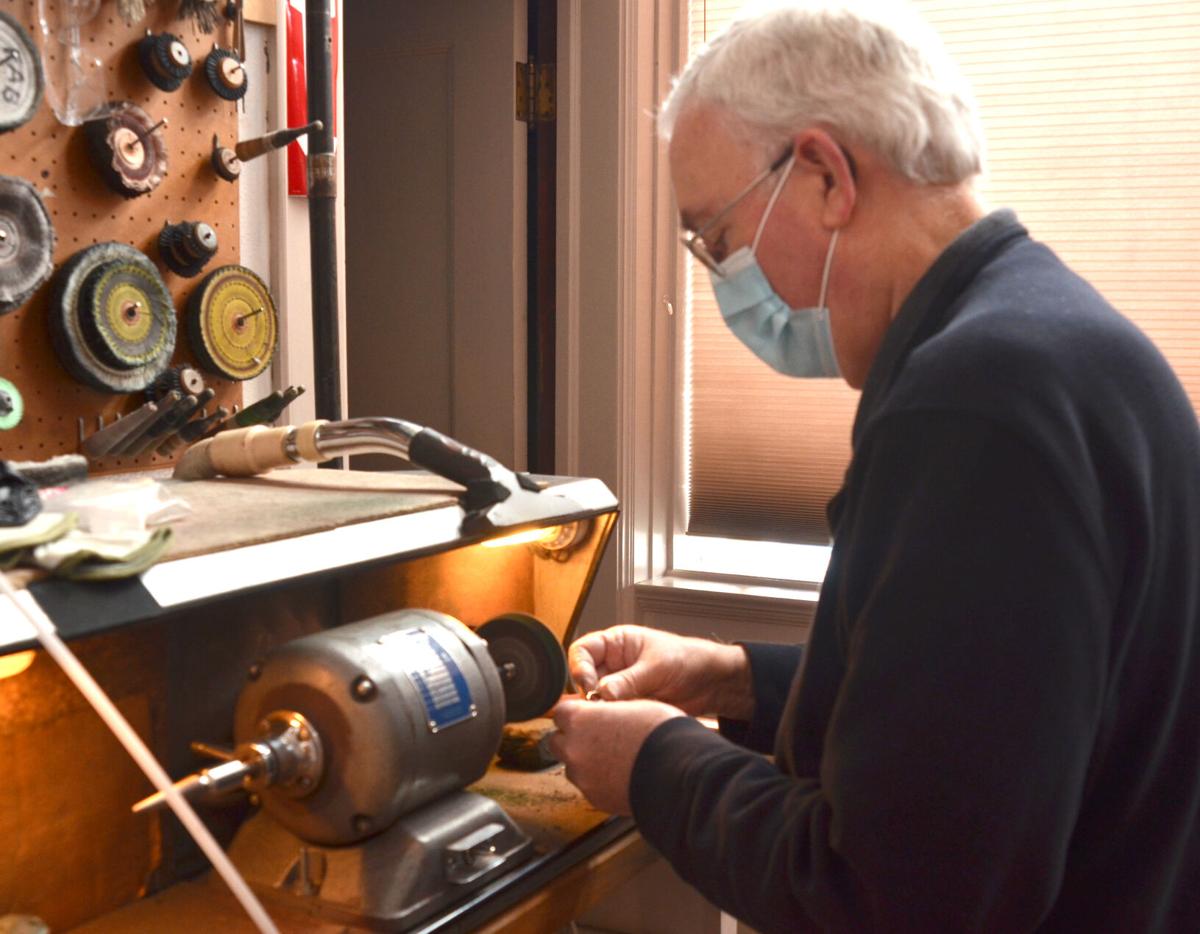 Stewart Jones, of Stewart Jones Designs in Joseph, polishes a ring he made at his shop. He and wife Catherine Matthias are closing the gallery portion of the shop and moving the jewelry business to their home north of town in February.

Stewart Jones, of Stewart Jones Designs in Joseph, demonstrates the precision work that can be accomplished on a hand-poweered 1860 Swiss Rose metalworking lathe that he regularly uses.

Jeweler Stewart Jones, of Stewart Jones Designs in Joseph, shows a piece he was working on Thursday, Dec. 31, 2020, at his shop. He and wife Catherine Matthias will close the downtown shop in February and move it to their home north of town.

Stewart Jones, of Stewart Jones Designs in Joseph, polishes a ring he made at his shop. He and wife Catherine Matthias are closing the gallery portion of the shop and moving the jewelry business to their home north of town in February.

JOSEPH — Stewart Jones has left the building — well, almost. He and wife, Catherine Matthias, are closing Stewart Jones Designs downtown in February and moving to their home north of Joseph with a reopening date set for March 10.

Jones and Matthias sold the old 1911 First Bank of Joseph building in October and plan to sell all the artwork they display before the move. Any art that doesn’t sell will be returned to the artists, Matthias said.

Right now, they have a 20%-off sale on all the artwork and most of the jewelry through Jan. 15.

“We’re scaling back the overview of the business,” Jones said. “We’re eliminating the art part of the gallery and we’re going to focus only on what I’ve been doing, which is jewelry design, manufacture, maintenance, repair, watch batteries, shortening watchbands, everything I’ve always done I’m going to continue doing but it’ll be from that location.”

They’ll be moving to the old Dobbin House at 65605 Dobbin Road, where Jones will continue his work and Matthias will continue to manage the business, as well as continue her own vocation as a published author of children’s books.

“The nice thing is that people who’ve lived here for a long time know the Dobbin House,” Matthias said. “It was built by Jay Dobbin and he had a huge sheep ranch there.”

“My methodology is fabrication for the pieces that I make,” he said. “In other words, I build a piece out of the metal that it’s going to be in. I don’t carve waxes and cast. I do everything by fabrication, which lends itself to maintenance and repair of pieces rather than casting an existing piece. ... It’s the only way I work.”

His preference is to work in all carats of gold, as well as in platinum and silver. The real exception is titanium, which requires specialized equipment he chose not to go into.

Neither does Jones limit his work to jewelry. He considers himself a wide-ranging metalworker.

“I’ve worked on starter motors and teapots and I’ve rebuilt an enamel logo for the radiator of one of the antique cars,” he said, adding that he rebuilt it in a way so it was removable so the owner could take it along to prevent it from being stolen.

“But what he prefers is to work in fine metals,” Matthias stressed.

Jones also takes great care in getting the finished pieces to the customer. He told of a platinum engagement ring he recently made for a client that he and Catherine took to personally deliver in La Grande.

“I wasn’t comfortable trusting the usual carrier services … to get it there on time because he wants to give it to her tomorrow,” he said.

Jones’ and Matthias’ journey to settle in Wallowa County goes back to when he was a student at the University of Oregon studying architecture more than a half-century ago. After nearly earning his degree, he was advised that he still needed another fine arts course to graduate. He said the only choices were drawing and metals, but he’d taken nearly all the drawing classes the UO offered.

“I took the metals class and never looked back,” he said. “I dropped out of architecture at the end of the summer and went into metals full time.”

But the real turning point was during a drive one day.

“I left home and as I got to the top of Rattlesnake Hill, I saw the fog bank over the Wallowa Valley.” he said.

After that view of the Wallowa Valley, he decided that’s where he wanted to go.

“I turned around, went home, called the registrar at the UO and said to withdraw me; I’m no longer going to school,” he said. “I decided I needed blue sky and sunshine. I don’t need traffic and fog and the city.”

During his final two years in school, he began his jewelry business by selling pieces he didn’t need for coursework to buy tools and by building a client base in western Oregon. He later learned of an apprenticeship in manufacturing jewelry that had opened up in Eugene for a year where he learned critically precise work in less time.

The last place the couple lived and worked before moving here was in Lake Oswego outside of Portland for almost 10 years. They have one son and three daughters in the Portland area, who occasionally visit.

Friends in that area told them they ought to take time off and visit Wallowa County, saying it’s their kind of country. Eventually, they visited in March 1998.

“Basically, it was just to get our friends to back off,” Jones said.

Ten months later, on Jan. 1, 1999, they moved to Joseph and first ran their gallery out of their home at Sixth and Main. It was in 2005 they bought and moved to the old bank building.

Now, in their early 70s, Jones and Matthias are hoping to scale back their business a bit.

Although the shop and gallery used to keep regular, full-time hours, the home shop — in the foreseeable future — will be by appointment only, though the couple will be quite flexible on making those appointments.

“There’s no knocking on the door” at their home, Matthias said.

“I don’t want to be meeting people at the door in my boxer shorts,” he laughed.