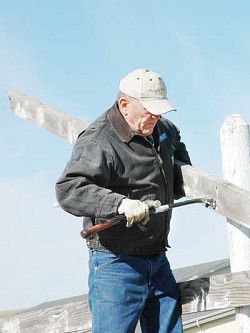 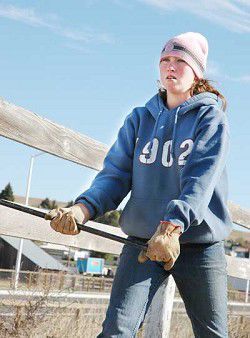 According to Karen and Joe Rinehart, who have been installing the rails around the Wallowa County Fairgrounds racetrack, Wallowa County residents have donated enough rails to complete the job.

The community response was enormous with approximately 40 individuals, ranches, clubs and organizations donating more than 180 rails. In addition, Wallowa County Grain Growers donated fresh paint for the gates on the track, Northwest Fence Company donated a portion of the purchase price for the rails, and Jack Prociw made branding irons so that individuals could mark their donated rails.

That is not the end of the donations, volunteer hours, use of equipment and more.

A dozen fair boosters showed up for the Oct. 11 workday to help Joe and Karen Rinehart and by the end of the day all of the old rails around the track were down, new rails were up down the back-stretch, a dozen posts had been reset, two sections of the old infield grandstand had been dragged to the burn pile, and Oregon Equestrian Trails, Highview Ranch, and Rocking Lazy J Ranch had all burned their initials or brands into rails.

Harold Hartley, whose company Northwest Fence Company supplied all the rails at a discount, brought his auger and fence post pounder and advised volunteers on the most efficient way to install rails. Lyle Ulrich made short work of tearing down rails, along with Anna Rinehart, Karen Jackson and others, and then went on to working with the branding irons. Jeff Parker and Angelika Garoutte brought Parker's big tractor down and began scooping up old rails, and soon tackled the infield grandstand. Sondra, Kent and Chris Lozier lent a hand installing new rails and fair manager Randy Garnett oversaw the operation while working with Hartley.

Doris Noland of Video Buffs provided the workers with a huge flat of maple bars, coffee and hot chocolate.

Kent and Chris Lozier were back on Oct. 12 to help install rails and burn weeds along north side of the track. "We have about 60 rails left to put up, and Tom "Rocky" Nicewaner has volunteered to set about 100 feet of new posts," said Karen Rinehart. "We also need to clean up by the old grandstand." Karen Jackson has volunteered to bring her metal detector to help locate nails in that area in the next few weeks.

The Rineharts, who exhibited more guts than brains in volunteering to do the entire project, were thrilled with the assistance. "Having Jeff Parker's tractor there was huge," Rinehart said. He praised donors and volunteers for their community spirit.

That community spirit is unstoppable, with several organizations and businesses already in line to support the next project. The inside rail project and repainting all the metal panels on the outdoor arena will probably wait until spring, Rinehart said. Stay tuned to the Chieftain for further developments.

Donors who wish to brand their rails may stop by the Chieftain to borrow the running irons. All branding is the responsibility of each donor. Donors unfamiliar with branding are advised to get a rancher friend to help them or wait until spring when a branding party will be scheduled.

"I think its awesome what the community has done," said fair manager Randy Garnett. "The fair board is tickled and we think it is really neat what has happened."