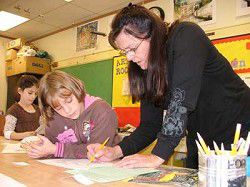 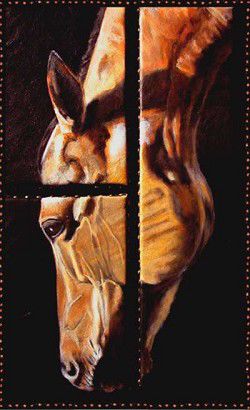 "Third Deke" is the title of this painting on leather by Laurie Hueckman. She considers it her signature piece.

"Third Deke" is the title of this painting on leather by Laurie Hueckman. She considers it her signature piece.

Enterprise School District welcomed Laurie Hueckman as its new art teacher this fall. She is just beginning her career as a classroom educator, but brings a rich background of experience in art and rural life.

"The kids are great, and the community support is wonderful," Hueckman said about her new job in Enterprise.

Her biggest challenge is the fact that she teaches about 200 students, from kindergarten all the way through high school. Over a month into the school year, Hueckman's elementary students are concentrating on the basic elements of art and drawing, while her high school classes are working on a variety of projects. Hueckman asks her students to draw in a sketchbook every day. "I want their hands busy drawing all the time. I try to get them in the habit," she said.

A native of John Day where she's lived most of her life, Hueckman received a master of education degree from Eastern Oregon University as part of a 13-month program that combined being both a full-time student teacher and a student.

"It's a little overwhelming at first," she said. She feels lucky that her student teaching experience did a good job of preparing her for Enterprise - she spent half a year with high school art students, and half at an elementary school.

"As a child I loved to draw horses. Horses were always a big part of my life," she said about her early experience as an artist.

Hueckman said her mother's parents owned a ranch, which is still in the family, while her father was a logger.

She graduated from Grant Union High School in 1971, married young and was raising a family before she started her first tentative steps in the arts, buying a camera at a yard sale, teaching herself photography and becoming a free-lance photographer, shooting weddings, reunions and portraits.

In addition to leasing and working on her grandma's ranch, Hueckman also worked through the years in many different jobs. "I've done it all," she said, naming a few of her past careers: bank teller, dental assistant, 4-H assistant at the Grant County Extension Office, bookkeeper. She has also raised three children, two sons and a daughter, who are now grown.

Eventually, Hueckman started taking long-distance education classes, one at a time, through Eastern Oregon University and Blue Mountain Community College, for college credit. One of those classes was drawing, which was then followed by several painting classes.

She said about this time she realized, "This is who I am and what I want to be when I grow up. ... Doing painting caught me on fire. I thought, 'I can do this.'"

Hueckman eventually moved to Boise, worked while going to college, and graduated from Boise State University with a bachelor of fine arts in illustration.

She was also finding her way as a professional artist. While she is proficient in many different styles and media - landscapes, abstracts, sculpture - Hueckman in some ways has reverted to her childhood when it comes to art. Her specialty is painting portraits of horses, commissioned by horse owners and often using photographs she's taken as a basis.

Hueckman has shown her work in a variety of shows, ranging from the Cowboy Christmas bazaar in Las Vegas last year during the National Rodeo Finals to the "In the Company of Cowgirls" Invitational Western Art Show in Pendleton this spring. Her piece in the spring show, an oil painting on leather and paper depicting cowgirls at work and play, was one of two that sold.

She is currently taking a pottery class from former EHS art teacher Gary Wishart, with the goal of putting the ceramics equipment at the high school back into use.

"I feel at home here," said the new art teacher, mentioning the similarities of the rural lifestyle in Grant and Union counties. While she hopes eventually to get involved with the local horse and arts communities, for now she's concentrating on her top priority - teaching art to Enterprise students.