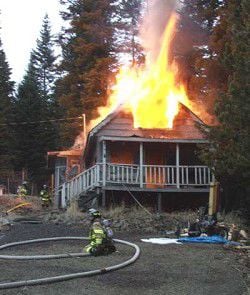 <I>Chuck Anderson/Chieftain</I><BR>Flames shoot through the roof and windows of a home gutted by a morning fire Feb. 24 on Old Ski Run Road in rural Joseph. 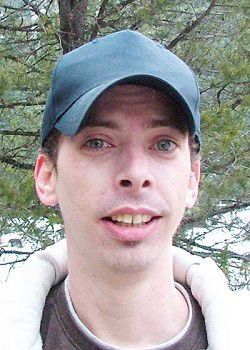 <I>Chuck Anderson/Chieftain</I><BR>Flames shoot through the roof and windows of a home gutted by a morning fire Feb. 24 on Old Ski Run Road in rural Joseph.

A fire that had been smoldering for hours gutted a two-story house in rural Joseph early on Feb. 24.

The occupant, Jeremy Dodd, a Wallowa County sheriff's dispatcher, was not injured.

Fire Chief Tom Clevenger said the fire started near a stovepipe and spread throughout the house while Dodd was sleeping. He woke up, saw smoke and escaped, Clevenger said.

The house was equipped with a smoke detector but it didn't operate due to a weak battery, Clevenger said. The loss was estimated at $100,000.

Six Enterprise firefighters assisted, shuttling water from the nearest fire hydrant more than a mile away.