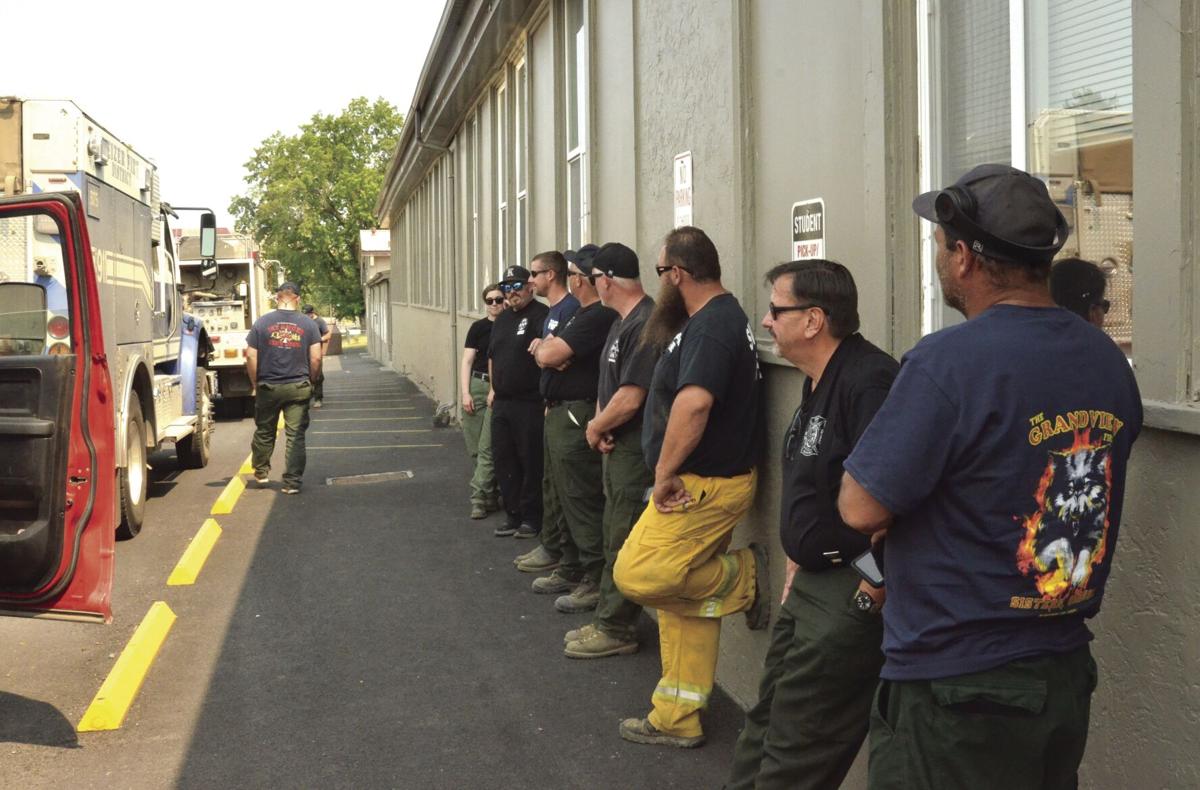 Firefighters from around Oregon wait outside Wallowa Elementary School before an Incident Team meeting Saturday, July 17, 2021. They were to learn at the meeting their place on the fire line of the Elbow Creek Fire beginning Sunday morning. 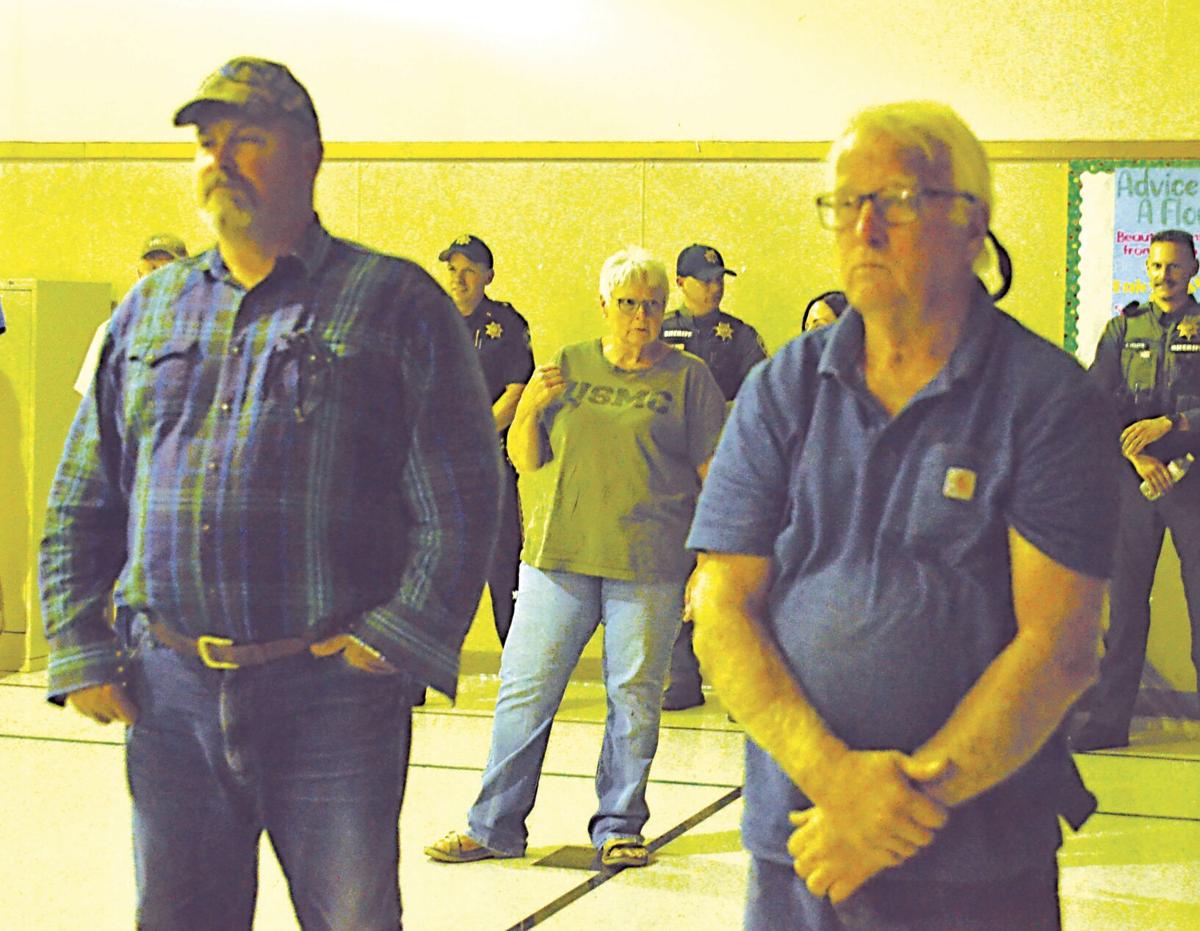 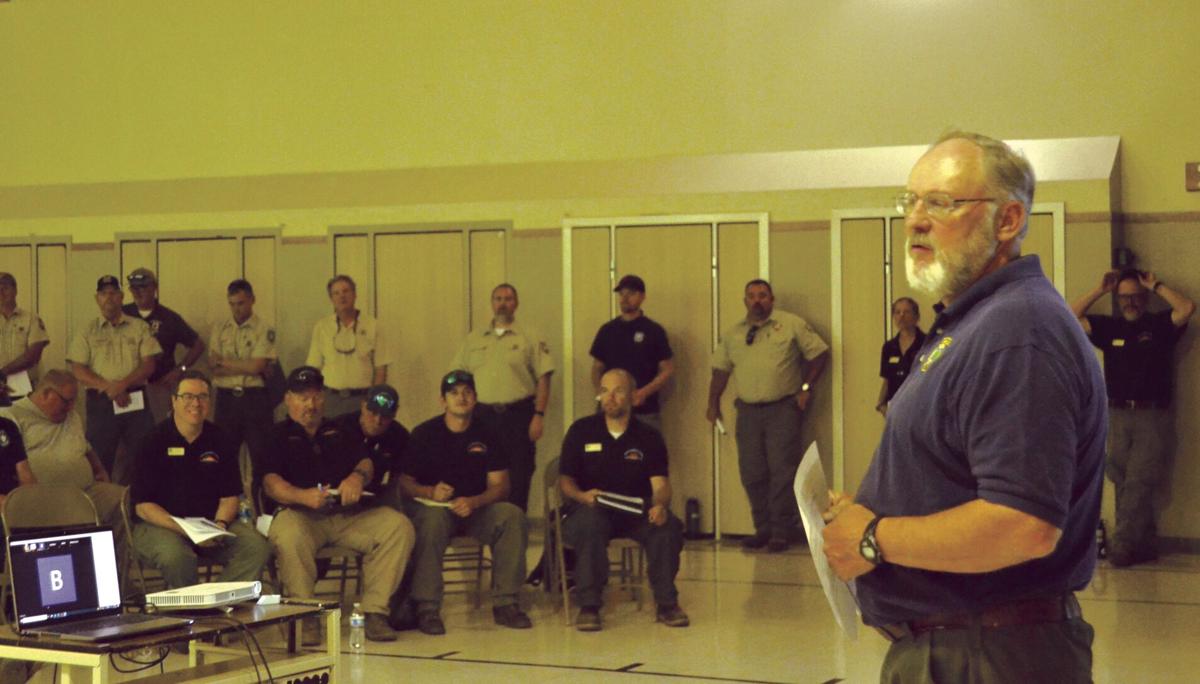 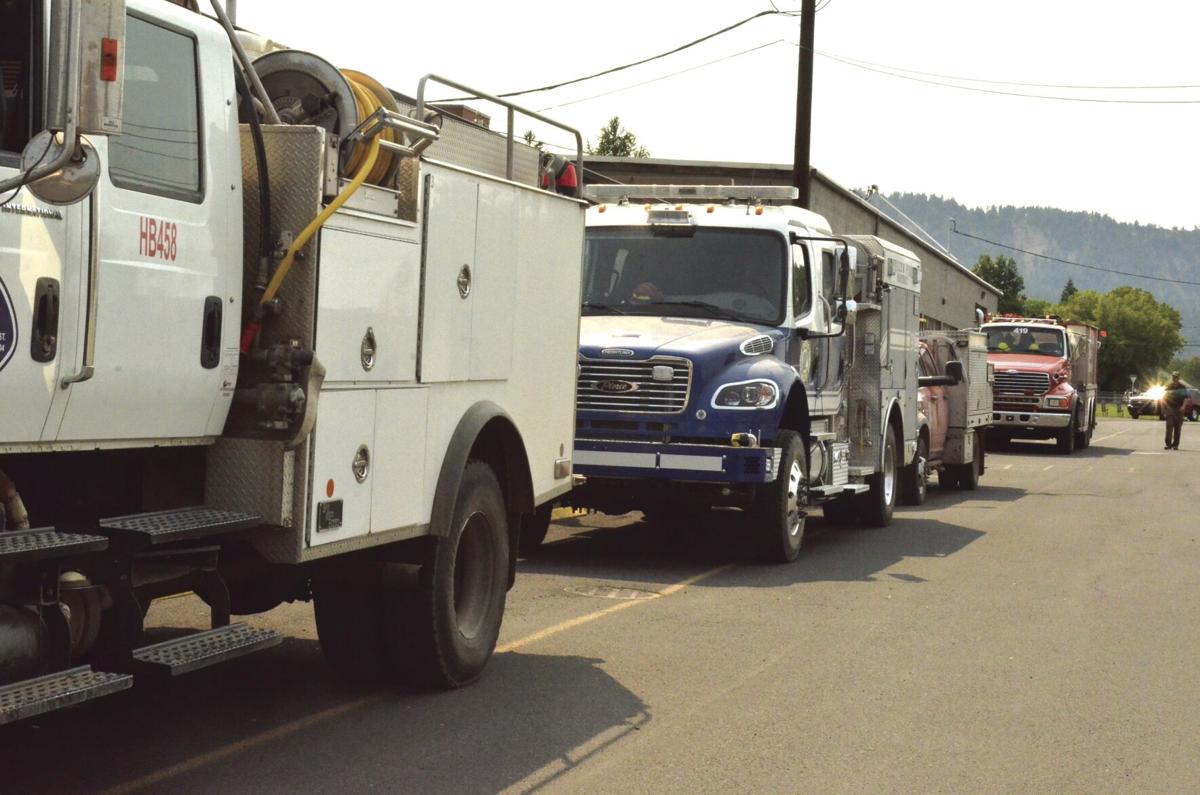 Firefighting units from districts across the state line up outside Wallowa Elementary School before an Incident Team meeting Saturday, July 17, 2021. The units were to be deployed to the Elbow Creek Fire starting early Sunday.

Firefighters from around Oregon wait outside Wallowa Elementary School before an Incident Team meeting Saturday, July 17, 2021. They were to learn at the meeting their place on the fire line of the Elbow Creek Fire beginning Sunday morning.

Firefighting units from districts across the state line up outside Wallowa Elementary School before an Incident Team meeting Saturday, July 17, 2021. The units were to be deployed to the Elbow Creek Fire starting early Sunday.

WALLOWA — Firefighters and trucks from agencies all over Oregon converged on Wallowa on Saturday evening, July 17, to make plans to take over fighting the approximately 11,000-acre Elbow Creek Fire in northern Wallowa County the following morning.

More than 70 people gathered in the gymnasium of Wallowa Elementary School for an “in-briefing” chaired by John Buckman, a retired district forester for the Oregon Department of Forestry, filling in while Matt Howard, of the Wallowa Unit, is away fighting another fire.

Outside the school were a couple dozen fire and support trucks from agencies such as the Mount Angel, Keizer, Jefferson and Silverton fire districts; the Oregon Department of Forestry, the U.S. Forest Service, Marion County, the state Fire Marshal’s Office and even as far away as Portland Fire Rescue.

Wallowa County Commissioners Todd Nash, John Hillock and Susan Roberts all expressed their appreciation that so many people from so many agencies showed up in the county’s time of need.

“We’re grateful for the expertise and the help from all these people,” Commission Chairman Nash said. “They’re well prepared.”

Buckman announced to the group the immediate plans to transfer command of the fire from local efforts to the task force assembled in Wallowa.

He said there also would be a daily planning meeting at 4 p.m. to get the latest updates on the fire and make plans for the following day.

Buckman introduced various agency leaders and cooperators and urged them to get together after the hourlong meeting to work out the details of how they’ll attack the blaze.

Most who spoke emphasized firefighter safety, minimizing the damage to property the fire could cause, working closely with the local communities.

COVID on the fire line

“Usually, we have what we call ‘camp crud.’ But last year, with everybody wearing masks, nobody had it because of the protocols,” Smith said. “But this year, we’ve backed off. None of us are wearing masks — or at least very few of us are. But there’s still a variant (of coronavirus) out there and a lot of people are still getting sick.”

He said there’s probably higher rate of sickness among firefighters because most are younger and less inclined to get vaccinated. He urged no more handshakes and to do fist or elbow bumps so as to not spread germs.

Smith also emphasized the purpose of the team.

Once such representative of a landowner present was Joe Justice, regional manager for Hancock Forest Management. He said Hancock, which harvests timber through logging contractors, has already lost hundreds of acres of timber with several thousand more threatened.

His contractors; including Henderson, Kellerman and High Ridge Logging; are active fighting the fire since they have equipment such as bulldozers in place useful for firefighting.

“Henderson’s out there in a big way. He’s got a number of pieces of equipment good for fighting fire,” Justice said. “We’ll be bringing more contractors in. That’s all part of the integrated firefighting process.

Wallowa County Emergency Services Director Paul Karvoski, who has been on the east end of the fire almost continually from its Thursday start, said that although it didn’t increase much Saturday, it remains zero percent contained.

“Things are going good up there,” he said. “But it’s zero percent until we can get it backburned. It’s hot down there.”

Growth of the Elbow Creek Fire seemed to be at a minimum Saturday, July 17.