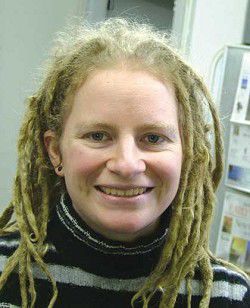 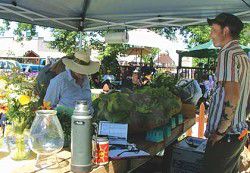 <I>Elane Dickenson/Chieftain</I><BR>The Farmer's Market in Joseph last summer provided a way for local growers get their produce to local customers. Angela Eckhardt of Lostine argues that it would be easier for farmers if they were allowed to sell directly to grocery stores and restaurants, were it not for needless bureaucratic red tape.

<I>Elane Dickenson/Chieftain</I><BR>The Farmer's Market in Joseph last summer provided a way for local growers get their produce to local customers. Angela Eckhardt of Lostine argues that it would be easier for farmers if they were allowed to sell directly to grocery stores and restaurants, were it not for needless bureaucratic red tape.

A Lostine woman has made it her mission to challenge what she sees as staid thinking and overly cumbersome federal and state regulations that hamper small family farms and alternative fuels production.

Angela Eckhardt, 31, has written an extensive paper entitled "Farm and Freedom Friendly Policies for Oregon" that will be published in the Cascade Policy Institute, a Libertarian Think Tank. The paper can be accessed online at (www.freedomsolutionsnw.org/farmfriendlypolicy). She is hoping that farmers, ranchers and policy makers will read her paper and that the feedback might eventually start a movement toward a more reasonable farm policy in Oregon and nationwide.

"No one remembers what an actual family farm is like," Eckhardt said in an interview with the Chieftain Friday. "The USDA has had an assumption that large acreage correlates with efficiency, but small farms are far more efficient."

Eckhardt is a regular contributor to Capital Press, an agricultural newspaper circulated throughout the northwest. She believes that the policies of the U.S. Department of Agriculture have long favored industrial-sized farms that are inefficient and not always friendly to the environment.

"What is a farm when there's no farm family that can live there? It's a different thing - it's an agribusiness...It doesn't matter to an agribusiness how much pollution or how unsightly it is, because no one lives there," she said.

Even the very way the USDA classifies farms is discriminatory toward small farms, she said. Under USDA classifications, a "small farm" is defined as earning less than $250,000, even though a National Commission on Farms study estimated that by this designation 94 percent of the farms nationwide are classified as "small farms." Yet, the USDA rarely mentions small farms in its strategic plans, even though 94 percent of the farms across the country are designated as such, she said.

"Farms earning less than $50,000 gross annual sales are dismissed as 'non-commercial' by the USDA. These are often derided as 'hobby farms,' as though their operators aren't really serious about making a living at farming," Eckhardt wrote in her paper.

Oregon's land use policy also discriminates against small farms by requiring that a farm have a minimum acreage of 80 acres and that a ranch must have a minimum of 160 acres of rangeland, she said. This often means that many Oregonians cannot even begin to enter farming because they cannot purchase smaller and more affordable farms, she said.

Thus, the state's land use laws tend to favor the USDA's bias against small farms based upon the unproven assumption that larger farms are more productive, she said.

The giant agribusiness farms tend to have monocultures and mono-crops, whereas small family farms used to have more diverse crops and diverse breeds, she said. As an example of "modern" industrial breeding practices, the factory-bred large-breasted turkeys can no longer even reproduce naturally, so farmers must buy new chicks every year.

Eckhardt's home in Lostine is an example of what she sees of future rural/urban farms could be like. She has chickens, ducks and turkeys wandering around her back yard.

The paranoia surrounding avian flu is unwarranted given that it has long been known in Asian countries that Kimchii cures avian flu, she said. And yet, the USDA has shown absolutely no interest in spreading the knowledge of how to cure avian flu, and seems more intent on demonizing the poultry industry, she said.

Despite many "buy local" campaigns for other products, it remains nearly impossible to buy many locally grown and raised farm products outside of "alternative markets" such as farmer's markets.

Eckhardt used to work in M. Crow and Co. general store in Lostine, and remembers seeing the old abandoned butcher's station. Local butchers and local dairies unfortunately have become a thing of the past, she said. Nowadays, Wallowa County ranchers have to ship their cows as far away as Lewiston, Idaho, or Pasco, Wash., to be inspected and slaughtered.

She is in favor of the concept of mobile-slaughtering houses as an alternative to having to ship all local animals hundreds of miles away to be processed. She also favors expanding the concept of Oregon's "Three cow exemption" rule that allows ranchers to sell milk directly without a license.

Eckhardt is in favor of creating a "geographic exemption" that would allow ranchers and farmers to sell their products locally.

Consumers would more likely have a greater trust for products that were locally grown, she said. Plus, if the meat were to be bad, the system would police itself better knowing exactly where the meat came from, she said. It would be more a system of neighbors selling to neighbors and watching after each other - a system she sees as much better than the "mystery meat" system we currently have, where no one really knows where the meat comes from, she said.

Eckhardt is also an advocate of freeing up regulatory hurdles that prevent small producers of biodiesel.

She and her husband Jay have in the past used a small oil-press to create their own biodiesel from sunflower seeds. They also used to obtain used vegetable oil from local bars and restaurants, such as the Hydrant.

"We would have started a business were it not for the fact that we had to be licensed as a gas station," she said.

If the country really is serious about becoming independent from foreign oil, then it must clear away regulatory hurdles that prevent small farmers from growing and producing biodiesel and selling it locally, she said.

Eckhardt hopes that people will go online and read her paper in order to start thinking about ways to make farm policies friendlier to actual family farms.

"Oregonians expend enormous resources to save farmland without ensuring that people are free to make a living at farming. Government agencies go to great lengths to prevent farmers from selling food to their neighbors, friends and relatives, on supposed public safety grounds, despite the risks inherent in our commercial food supply. America promotes 'free trade' agreements around the world, while her markets at home are anything but free," Eckhardt wrote.

"The attached paper is based highly on opinion," Williams said in an email to the Chieftain. "I will not offer comment on people's opinion."