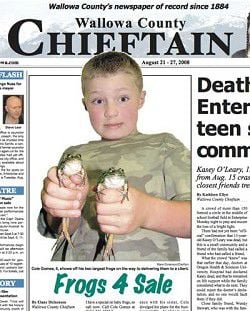 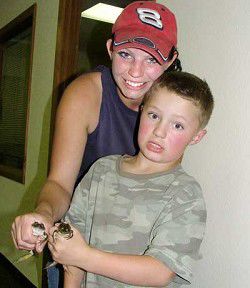 Frog Boy has been busted.

A first-grade businessboy was pitted against state game law this week, when young Cole Gomes, 6, of Alder Slope was told that his lucrative frog-selling venture is illegal.

"They said the frogs are on the endangered species list, and he can't even give them away, that they can't be taken off our property," explained Julie Montgomery-Gomes, Cole's mother.

Actually, the frogs are apparently on the Oregon Department of Fish and Wildlife protected wildlife list, but the effect is the same - Cole's frog business has been shut down.

The Alder Slope family received a call from Oregon State Police game officer Mark Knapp on Monday morning, Aug. 25,, saying that Cole had to close his business, which was featured prominently on the front page of last week's issue of the Wallowa County Chieftain.

Cole was prospering and happy in his first business, assisted by big sister Christina Montgomery, when the axe of the law fell.

"Cole couldn't understand it. He was practically in tears all day," said his mother. "He wanted to know if he'd have to give the money back."

At last word, the lad had made about $40 in the short-lived venture - but the boy's final tally may never be known. "He doesn't want to say, now," his mother said.

There's no indication that authorities plan to cite Cole or confiscate his business proceeds.

Soon after Cole's unique business made front-page news, the Gomes took a few frogs to the Oregon Department of Fish and Wildlife. There, district wildlife biologist Vic Coggins identified them as spotted frogs, which are on ODFW's "protected" list and a candidate for the federal endangered species list.

According to ODFW administrative rules, "It is unlawful for any person to hunt, trap, pursue, kill, take, catch, angle for, or have in possession, either dead or alive, whole or in part" a long list of species, including the "spotted frog (Rana pretiosa)."

There is still a dispute, however. When the family researched their frogs on the Internet, they found out that Rana pretiosa is the Oregon spotted frog, which is a candidate for the federal Endangered Species Act list ... and that their amphibious critters are almost certainly Columbia spotted frogs (Rana luteiventris).

Coggins, who is a neighbor on Aspen Grove on Alder Slope, agreed that the animals are Columbia spotted frogs. "I'm very familiar with them. I have them on my place." However, he said, ODFW interprets the protected list to include that species also, "as far as Oregon is concerned."

According to local frog expert Jan Hohmann, Columbia spotted frogs were formerly lumped in with the Rana pretiosa species until they were given their own name.

Coggins said that the population of amphibians all over the world are declining, and the spotted frog population on his own property has been part of a U.S. Forest Service frog-study area.

Coggins expressed regret at the Gomes families' distress, but said it was plain that Cole couldn't be allowed to continue selling his spotted frogs.

Happily, there is a positive epilogue to this frog saga. Cole Gomes is already back in the frog-peddling business.

Tuesday morning, Cole and his mother walked into the Chieftain with a flyer advertising the boy's new legal"Frogs for Sale"venture. He's now marketing African water frogs, which they had purchased Monday night at WalMart in La Grande.

"Now Here!!!," the flyer reads. "Cole has NEW friends to sell!! The only frog that lives completely under water. The African frog is one of a kind and will make a great addition to your aquarium. (It is a tropical animal and must be kept indoors)... This frog comes with his own companion, one glo-light tetra fish. ... Limited stock, call Cole now (541-426-4556)."

You can't keep a good kid down.

Wallowa County's Frog Boy is back in business.