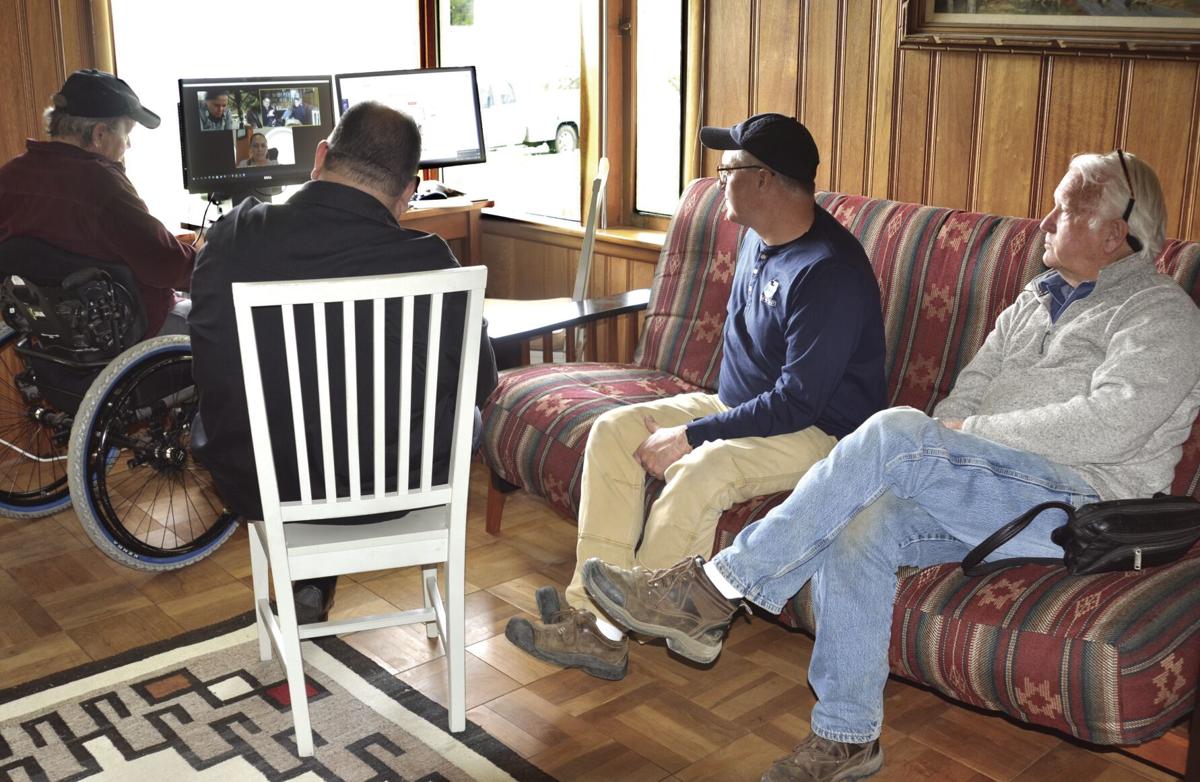 Reaching out to Tilaran, Costa Rica, locals held a Zoom teleconference Thursday, May 27, 2021, to discuss the possibility of establishing a Sister Cities relationship the the Central American city and county. From left, are Lyman Warnock of Enterprise, Gustavo Rodriguez of Tilaran, Scott McDonald of Enterprise and Wallowa County Commissioner John Hillock. 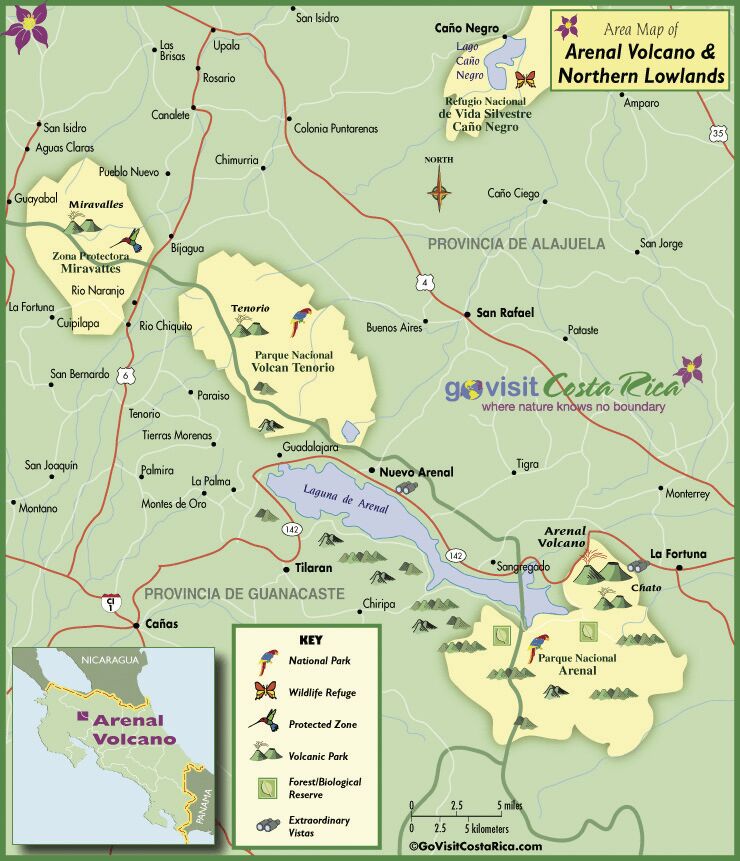 Tilaran, Costa Rica, with whom Wallowa County hopes to establish a Sister Cities relationship, is located near Lake Arenal in the lower central portion of this map. 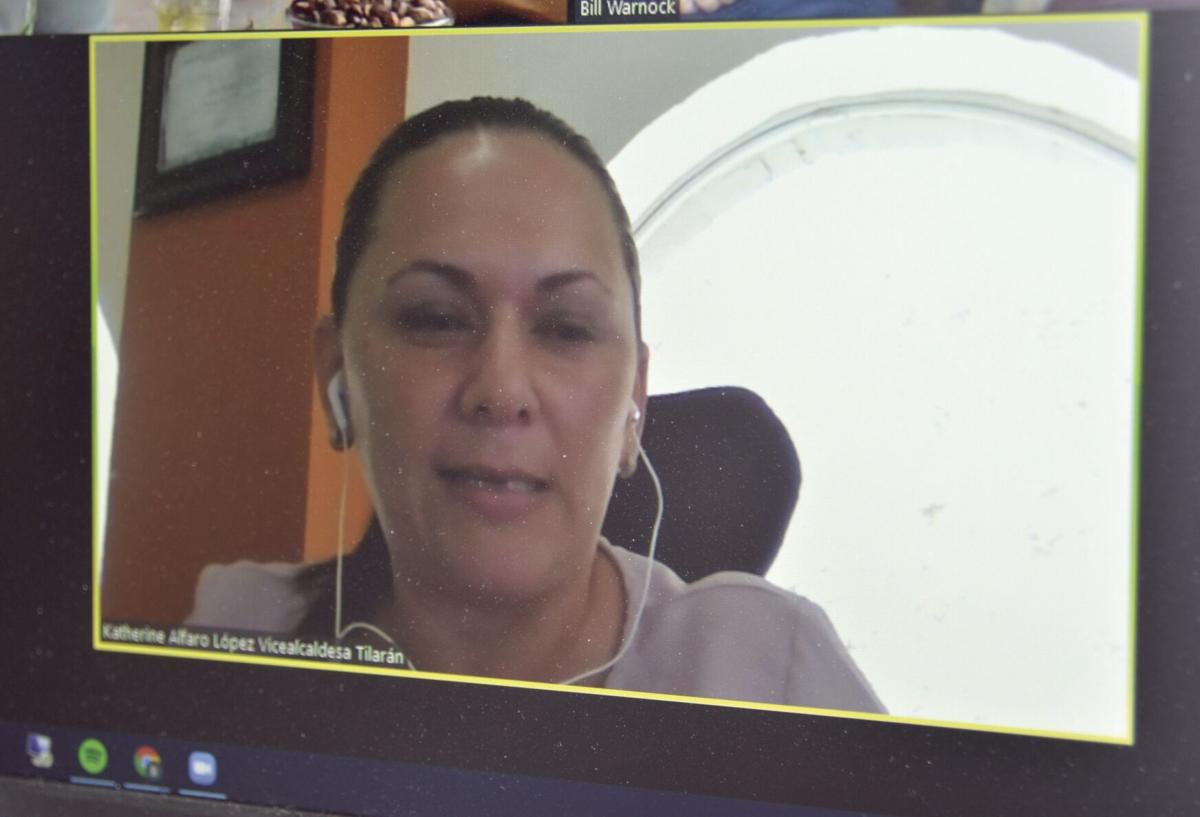 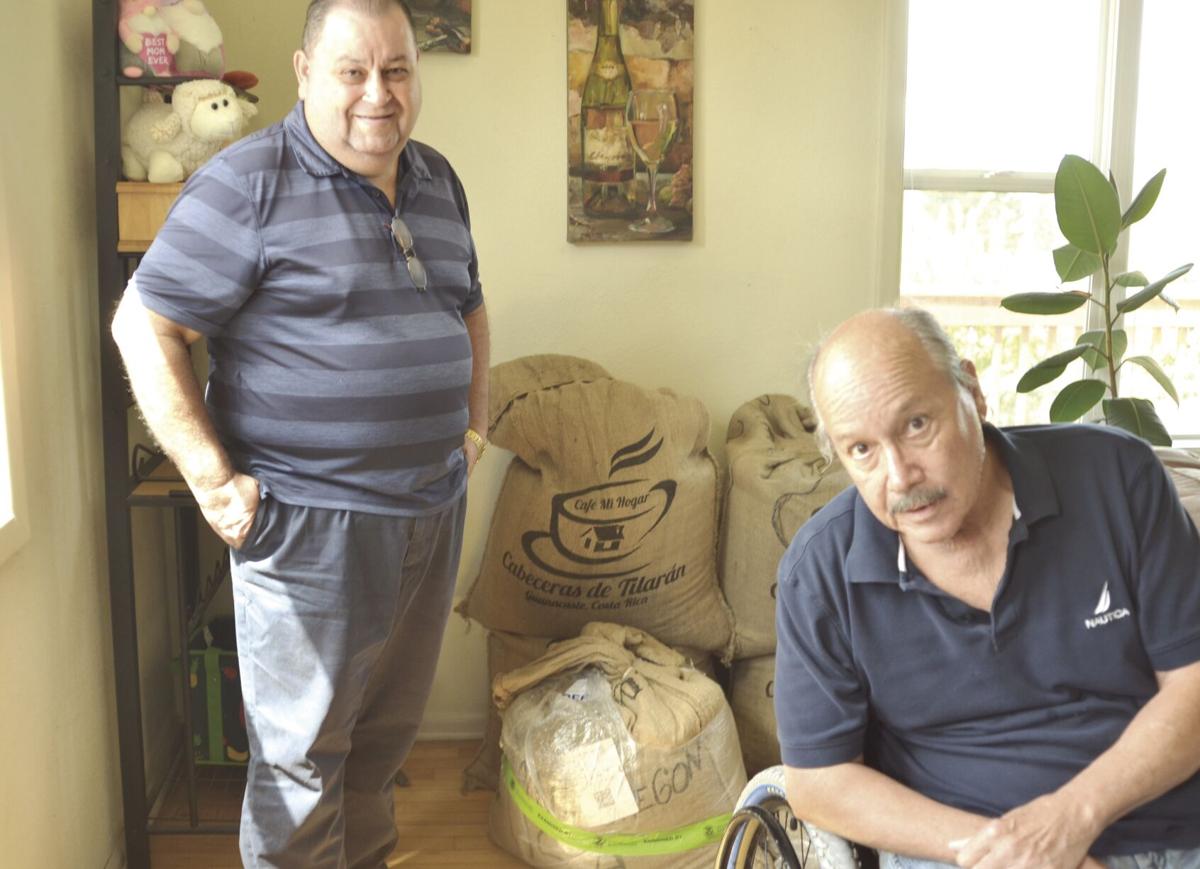 From left, Gustavo Rodriguez and Lyman Warnock show some of the Costa Rican coffee beans they hope to market in Wallowa County. The two are involved in establishing a Sister Cities relationship between Wallowa County and Rodriguez’s home of Tilaran, Costa Rica.

Reaching out to Tilaran, Costa Rica, locals held a Zoom teleconference Thursday, May 27, 2021, to discuss the possibility of establishing a Sister Cities relationship the the Central American city and county. From left, are Lyman Warnock of Enterprise, Gustavo Rodriguez of Tilaran, Scott McDonald of Enterprise and Wallowa County Commissioner John Hillock.

Tilaran, Costa Rica, with whom Wallowa County hopes to establish a Sister Cities relationship, is located near Lake Arenal in the lower central portion of this map.

From left, Gustavo Rodriguez and Lyman Warnock show some of the Costa Rican coffee beans they hope to market in Wallowa County. The two are involved in establishing a Sister Cities relationship between Wallowa County and Rodriguez’s home of Tilaran, Costa Rica.

WALLOWA COUNTY — Wallowa County is reaching out internationally and hoping to establish a sister cities relationship with a city and county in Costa Rica, where top-quality, premium coffee beans are grown and processed.

On Thursday, May 27, officials in Wallowa County and Tilaran Canton (county), Costa Rica, met to discuss the proposal via a Zoom conference.

Lyman Warnock, of Enterprise, has joined with an old friend — and his wife, Mildred’s uncle — Gustavo Rodriguez, to spearhead the project. They’ve approached city and county officials, as well as those of the chambers of commerce in both counties.

“It’s part of the Sister Cities program,” Rodriguez said Wednesday, May 26. “Tilaran has other Sister Cities already. One of them is Durham, North Carolina, and now after about a year and a half, I fell in love with this place so I told Lyman this would be a nice town to see if we can get a Sister City with Enterprise or Joseph.”

Tilaran, Costa Rica, is the county seat of Tilaran Canton. It is located in Guanacaste, a state in the northwest portion of the country. Like Wallowa County, it has a rural lifestyle that is based largely on agriculture and tourism. Also like Wallowa County, Tilaran has a sizeable lake — Lake Arenal — that, at nearly 33 square miles, has a much larger area than Wallowa Lake’s 2⅓ square miles. But both lakes draw considerable numbers of tourists to their communities, whether for water sports, hiking or bicycling around the lake. Tilaran also boasts horse races, rodeos, music festivals

“Tilaran trying to boost their tourism,” Warnock said, adding that the city hopes to get ideas from Joseph on how to do that.

“They’ve got a big lake like ours, only bigger,” Warnock said.

Another element of exchange is education. Warnock told of a businessman in Imnaha who sold his holdings here and plans to go to Costa Rica to set up a school to teach people trades.

Tilaran’s agriculture is largely cattle — beef and dairy — as well as hay, though not alfalfa like most of that found in Wallowa County.

“For example, the ranches here have a lot of cows,” Rodriguez said. “In my country, we produce a lot of cows for milk and for meat, and agricultural products like hay and fruits and vegetables. Also, horses.”

Both counties are strongly into the arts, Warnock and Rodriguez agreed. Also, both counties have active recycling programs.

“Those similarities are the ones that make an interest in the possibility of a sister city,” Rodriguez said.

Getting to know us

The Costa Rican has had years to become familiar with the United States.

“I love this Oregon state since I was very young when my family started living here,” he said. “I visited my family when I was in high school.”

In 1981, he was an exchange student in Morrow near The Dalles. His host family later moved to Kennewick, Washington, and to Portland, though they still have contacts in Morrow.

Later, after returning home, he was assigned by his government to the Costa Rican consulate in Atlanta for a year and then to Los Angeles for five years. He then returned to his home country and entered the private sector.

“Now I’m back here because I’m involved with the Sister Cities program,” he said.

Rodriguez spent Christmas 2019 with the Warnocks here and he then invited them to visit Costa Rica.

They did and got plagued by the coronavirus travel restrictions.

“We went down to Costa Rica last Feb. 7 (2020), and were going to stay to March 15 and the coronavirus hit and they closed the airports down; there were no flights out,” Warnock said. “All we knew is our flight had been canceled and we didn’t know what to do.”

They weren’t able to return until June.

“So we had lots of time to investigate the coffee business — and that’s where the ‘seed’ of the coffee bean was planted,” Warnock said. “Then we invited him up here.”

Rodriguez hasn’t been able to get Wallowa County out of his mind. The tie of coffee and community exchanges are what developed into the Sister Cities idea.

Tilaran gets to know Wallowa County

Warnock has been introducing Rodriguez to locals to make that happen.

“I just try to introduce him to folks he’s interested in,” he said.

Warnock said he received a particularly positive reaction from Eckstein, given Joseph’s traditional focus on tourism.

“He’d only been there a week or so,” he said of Eckstein. “I really like the guy.”

“He’s trying to help us get this done,” Rodriguez added.

“When we get to this part where we get all the cities behind us and the county government, we form a citizens committee to get the Sister Cities charter and everything,” Warnock said.

That was part of what was discussed during Thursday’s teleconference. The Tilaran delegation was led by Katherine Alfaro Lopez, vicealcaldesa (vice mayor), who sat in for Mayor Juan Pablo Vaquero, who was called away on an emergency. She was assisted by Enervey Ramirez, a member of the local chamber of commerce and tourism and who served as interpreter for Lopez.

On the Wallowa County end of the teleconference were Warnock, Rodriguez, Hillock and Scott McDonald of Joseph Creek Coffee in Enterprise.

Speaking for Lopez, Ramirez noted some progress toward establishing a Sister Cities relationship is already underway.

“Gustavo is the president of the (tourism) commission, and Mayor Juan Pablo Vaquero is part of that group,” Ramirez said. “You have some letters and have to consider what benefits you can get and what benefits we can get. I think that is the main idea of the Sister Cities is to share with the people … and maybe we can think of more things to share. Tilaran has really good things because we can say it’s one amazing area. The climate is excellent. We were the first canton in Latin America with clean energy projects and we’ve got a lot of experience in that. We worked with sustainability with the environment. … The municipality is going to be one of the bees’ friends because we’re going to take out the insecticides and herbicides in the public parts because we want to help.”

Speaking for herself, Ramirez noted the importance of sharing languages.

“Many years ago when I was a child, we started learning English through volunteers from the Peace Corps many years ago,” she said. “We don’t have it anymore. It was very important to many people because they were learning English with natives from the United States. I think that could be a very big example for us to be learning your language from people from there. That’s one of the things that we, from Tilaran, would need.”

She also expressed a hope that more Americans would learn Spanish.

“We’re thinking that if we can get this set up, that’ll be our next project to get them included,” Warnock said. “But that’s down the road.”

The Wallowa County-Tilaran tie is first on the agenda, but the two communities are still in the talking stage. Warnock said he hopes to cement the ties by this fall.

“All we’re doing right now is talking and expressing interest,” he said.