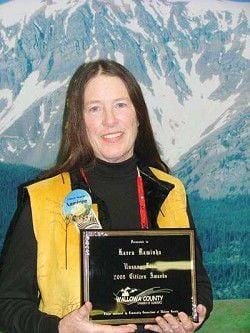 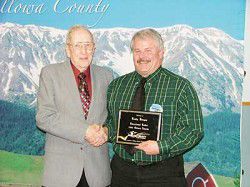 "Your Chamber: Being the Connection," the theme of the Wallowa County Chamber of Commerce for 2009, was carried through by its selection of top county citizens recognized at its festive 30th annual banquet Sunday evening.

Ben Boswell was visibly choked-up when he accepted a special award at the program. It honored him "For a lifetime of dedication and exemplary service to the citizens of Wallowa County."

"I feel I'm here under false pretenses," said the surprised and moved former 16-year Wallowa County commissioner, who had earlier given the event's invocation. "Wallowa County has given me so much more than I can ever return," he said, words that were borrowed for the occasion by other award winners.

Boswell's one-of-a-kind plaque was presented by Diane Snyder, who praised him for being "the essense of the theme of the Wallowa County Chamber" - being an ongoing connection between Wallowa County and the rest of the world. Saying his list of accomplishments was far too long to mention, she lauded him instead for some of his stellar qualities, including being pragmatic and a visionary at the same time.

Boswell was the first citizen honored by the chamber at the packed-house gathering at Cloverleaf Hall. Unsung Hero Karen Raminha, founder of Hometown Heroes, received the final - but far from the least - award presented. Recognized for her faithfulness in sending off a box to every one of Wallowa County's overseas soldiers every month for five years, Raminha said those soldiers and their families are the real heroes.

Mike Hayward, county commissioner, served as master of ceremonies at the banquet, which as always featured beautifully decorated tables full of goodies from table sponsors.

During the evening, leadership of the chamber officially passed from Sam Summers, who is now past president, to the 2009 chamber president Pat Wortman. Doris Woempner is vice president, which is traditionally the stepping stone for next year's leader.

Vicki Searles, who works as executive director of the chamber, was singled out by Summers - seconded out by the entire chamber board, who came on stage for the presentation - for the President's Award for her dedication "far above the call of duty."

Following is more information about each of the Citizen Award winners:

Under Dawson's leadership, NOEDD has helped finance over 100 small businesses, ranging from sole proprietorships to corporations, and its investments have helped create more than 290 jobs and retain another 182 years jobs.

Through the Regional Investment and Rural Investment program, NEOEDD has funded many business development project, investing almost $900,000 in area projects and leveraging another $45 million of matching funds.

An important outcome of these programs, according to Mullen, has been diversification of local economies. Thanks to Dawson's leadership, all three of Wallowa County's art foundries can thank NEOEDD for alternate financing.'

Dawson has shown a commitment to providing rural entrepreneurs with access to capital and is committed to client success through such things as small interactive planning classes and ongoing workshops and networking opportunities.

"Ms. Dawson is a trusted partner to entrepreneurship in Wallowa County and beyond," Mullen said.

Employee of the YearCheryl Jenkins became office manager of the Wallowa County over six years ago, showing early on that she was a "learn it by doing" type of person.

During her tenure there have been five general managers or publishers at the Chieftain, and at one point stepped in as interim general manager for three months, juggling her own job with new responsibilities.

"Cheryl assisted in making sure each transition went smoothly, not only for the new hire, but for the staff and the community. She weathered these changes without a scratch," said Marissa Williams, who served as acting publisher of the Chieftain for several months, in her letter nominating Jenkins.

Williams was unable to attend the banquet because of weather conditions, so the award was presented by the Chieftain's new editor and publisher Andy Martin.

Jenkins' nomination was enthusiastically supported by the entire Chieftain staff.

"Cheryl is a rock, giving us stability and consistency in the office," said ad representative Jim Sackett. "She possesses a fundamental goodness and integrity that leads her to consistently choose to help others."

"Cheryl is in many ways is the maternal heart of the Chieftain," said staff reporter Elane Dickenson. "She's the person who cheerfully answers the phone and goes far out of her way to help a client, customer, reader -- or coworker. She's the one person we all turn to."

Leader in Agriculture/TimberJim Zacharias has been involved in the timber industry his whole life, coming from a logging family - his father, uncles, brother, sons and nephew were or are loggers.

Bruce Dunn, who presented the award, said that Zacharias started working in the woods full time after graduating from Joseph High School in the mid-1970s and by the late 1980s and for over 10 years operated one of the largest logging company's in Wallowa County.

"After his sons took over the operating in the late 1990s, Jim started and is still operating a one-man sawmill in Joseph, known as Jay Zee Lumber Inc.," Dunn said. "This operation provides a wide variety of high-quality order-specific lumber products to satisfied customers" across Oregon and the Northwest.

Zacharias is a member of the Wallowa County Natural Resource Advisory Committee and recently started his second term on the Joseph City Council.

"Jim is a leader in his industry and in the community, and we feel that he deserves to be recognized and thanked for his service to the county," Dunn said.

Leader in the ArtsTom Hutchison, known for his guitar playing at many community events, was praised by award presenter Rodd Ambroson as a "a gifted musician, generous with sharing his talent throughout the community."

Hutchison is involved with the Wallowa Valley Music Alliance and a willing volunteer - from providing accompaniment in a "Child's Christmas in Wales" to background music for the annual Quick Draw. He writes original compositions and plays at the gazebo concert series and other venues in the county.

Hutchison owned and operated a book store in Joseph for a number of years, and would close in order to be a volunteer reader at Joseph Elementary school. "Tom has a keen literary mind, and is extremely well-read," Ambroson said.

Huchison is also a big supporters of the visual arts, serving on the Wallowa Valley Arts Council board of directors, serving as the council's liaison in the construction of its Web page and donating time to its events.

Educational Leader Randy Morgan has taught at Enterprise High School for more than 30 years, excelling throughout his career. His bands and choirs have won many awards through the years. "I believe one of the reasons for his success is his continual efforts to treat his students as adults and to expect them to behave as such," said presenter of the award, Gerald Perren. "Another reflection of his outstanding teaching ability is the fact some of his students are pursuing a career in music and credit him with inspiring their decisions."

Morgan was also assistant coach and then head coach of the EHS football team for a total of 15 years, and has supported other school sports, officiating at many events.

Morgan is also active in the community, serving twice as Enterprise Elks exalted ruler and working tirelessly for that organization. He is currently deputy for the Grand Lodge throughout this district.

Leader in Nonprofit WorkCarolyn Pfeaster has managed Community Connection and all its programs since 1990. "Carolyn's vision and dedication to Wallowa County is deep and abiding," said Lorri Howerton, who works with Pfeaster at the nonprofit, in presenting her with the award.

"She is tireless in her efforts to make Community Connections a very effective, relevant organization," Howerton said. Pfeaster's nomination was accompanied by numerous letters, praising her work.

Margaret Davidson, Community Connection executive director, noted that Pfeaster is always willing to take risks to implement new services, including the summer lunch program that serves children in the whole county, the Tuesday breakfast program for seniors at the Enterprise center, the summer Link bus service and the new twice-a-week bus to La Grande. "Her commitment to service and volunteerism goes far above the requirements of her position," said Davidson.

Leader in EntrepreneurialismMyron Kirkpatrick was hired as the Wallowa County Business facilitation manager in 2001. Since that time he has worked with over 600 clients. His coaching has helped with the creation of 75 new local business, 24 expansions, 71 business plans/financial models, and an estimated 142 new jobs. Additionally, there are an estimated 511 existing jobs that have been touched by his service.

Kirkpatrick was nominated by Marya Nowakowski and the board of Wallowa County Business Facilitation.

"WCBF is more deeply wired into the economic fabric ofWallowa County than almost any other economic or business development organization that has ever existed or done work in the county," Kirkpatrick said. "If entrepreneurs benefit, so do the revenues of the established businesses that provide them with materials and services."

Raminha was clearly moved at the unexpected nomination and told the crowd that she began the Hometown Heroes program when her son was in Iraq and simply couldn't stop sending the boxes once her own son returned home safely. Supporters of the nomination included Jess, Rikki, and Saxton Barton, Jim and Dona Elliott, Laurie Young, Todd Smith, Carson Young, Gunner Romanishan, and Lilee Post.