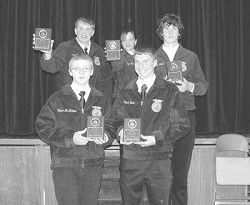 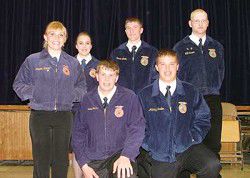 A slide show of the annual April senior trip to the Snake River by horseback and pack animal was a highlight of the Joseph High School awards banquet. This year 14 seniors, accompanied by about 10 parents and other adults, made the traditional trek.

Trevor Lewis and Trevor McWaters, selected from a group of 13 freshmen FFA members, both received the chapter's Star Greenhand award, presented by advisor Dave Yost at the May 7 banquet.

The chapter Placement in Agriculture Award went to Caleb Bright, who works or has worked for several different ranchers.

Several honorary members were inducted into the chapter during the evening event. They were Fred and Shelly Steen, parents of outgoing president Erik Steen, and George and Amy Kohlhepp and Eric and Jane Smith, parents of this year's State FFA degree recipients, Josey Kohlhepp and Amanda Smith, respectively.