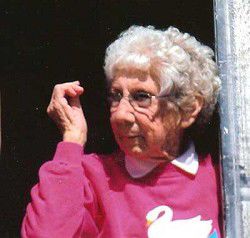 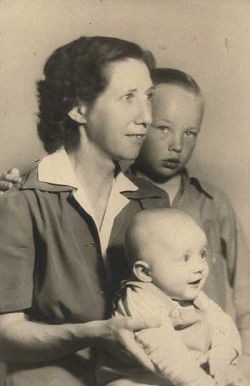 Margaret McClain holds her young sons while in her 30s.

Margaret McClain holds her young sons while in her 30s.

As she passes the century mark this week, Margaret McClain is grateful to be living alone in her own home in Joseph.

She is an avid reader, writes several letters a week, does much of her own house work and prepares most of her own meals, though she admits she doesn't have a big appetite and friends often drop by meals or take her out for lunch.

Margaret has friends of all ages, including two local women older than her - Edith Johnson and Kate Wilde, who both turned 100 recently and live in nearby Alpine House in Joseph - and others in their 90s. However, she said that having young people around helps contribute to a long life.

"You like your old friends, but you definitely have to have young friends. They are so bubbly and full of life," she said.

While her actual birthday was Tuesday, March 16, family and friends will be arriving from out of town to help her celebrate only a few days late with a big family dinner Saturday night, March 20, and then at an open house for all her many friends at the Outlaw Restaurant in Joseph Sunday, March 21.

Cards and letters are welcome but she doesn't want gifts. If well-wishers really want to give her something, Margaret asks that they make a donation to the Wallowa County Food Bank.

Margaret Murphey McClain was born at home in Wallowa on March 16, 1910, and has lived in Wallowa County her whole life. Her parents were John and Mary Bridget Murphey; her father, who worked in the Wallowa mill, died when she was about 15 in a mill accident.

She and her late husband, James "Jimmy" McClain farmed for many years on upper Prairie Creek on his family's land. They had two sons - Mike, a retired school superintendent who lives in Central Point; and James, better known as Gary, a practicing attorney, in Milwaukee, Oregon. She has six grandchildren and 10 great-grandchildren. The only family members who live in Wallowa County now are granddaughter Jane Harshman and her family, who visit "Grandma" frequently.

She is the last survivor of her family, one of six siblings who grew to adulthood.

A member of St. Katherine Catholic Church, her faith has played a prominent part of her life. While she doesn't go out to church anymore, she still receives Communion every Sunday when it is brought to her.

When she looks back over the past century, it's with a sharp memory and appreciation. "I have wonderful friends. Sometimes people ask me what kind of life I've had," she said. "Well, I've had a good life. I was married for 53 years. I'm grateful for my sons, my grandchildren and my great-grandchildren, plus all my good, good friends."

She remembers a lot of changes through the years, including her first radio and first television. "The biggest changes were in the vehicles," she said. "And if you owned a typewriter when I was young, then you were all uptown."

Margaret spent her first 25 years living at home, working at restaurants and going to a lot of dances until she married Jimmy McClain, a man she said it seemed like she'd always known. They drove on their honeymoon with good friends and neighbors Brick and Velma Buchanan, who were married on the same day, to Portland to a livestock exhibition.

After living in a house in Wallowa with electricity until she was 25, Margaret admitted that farm life with no electricity "was a little rough," but added, " All the neighbors lived the same way. I adjusted."

Electricity was finally installed at the farm when she was 41 years old.

Margaret has a lot of good memories of her years on the farm, including the door-to-door salesmen who sold everything from brushes and pots and pans to a "WPA outhouse" which the McClains - along with all the neighbors - bought.

She recalls attending the first Chief Joseph Days rodeo on the moraine in 1946, as well as the air show at the dedication of the Joseph airport the same weekend.

The McClains retired, sold the farm and moved into Joseph when Margaret was in her 60s. "I've lived here 36 years now," she said. "The thing I'm most grateful is that I'm able to live in my own house," she said.

Her son Mike said that one of his mother's prescriptions for a long life is a beer a day. "She says now she's afraid to quit." Margaret readily admitted a daily beer . "I may leave some of my food, but I never leave my beer," the centenarian said.