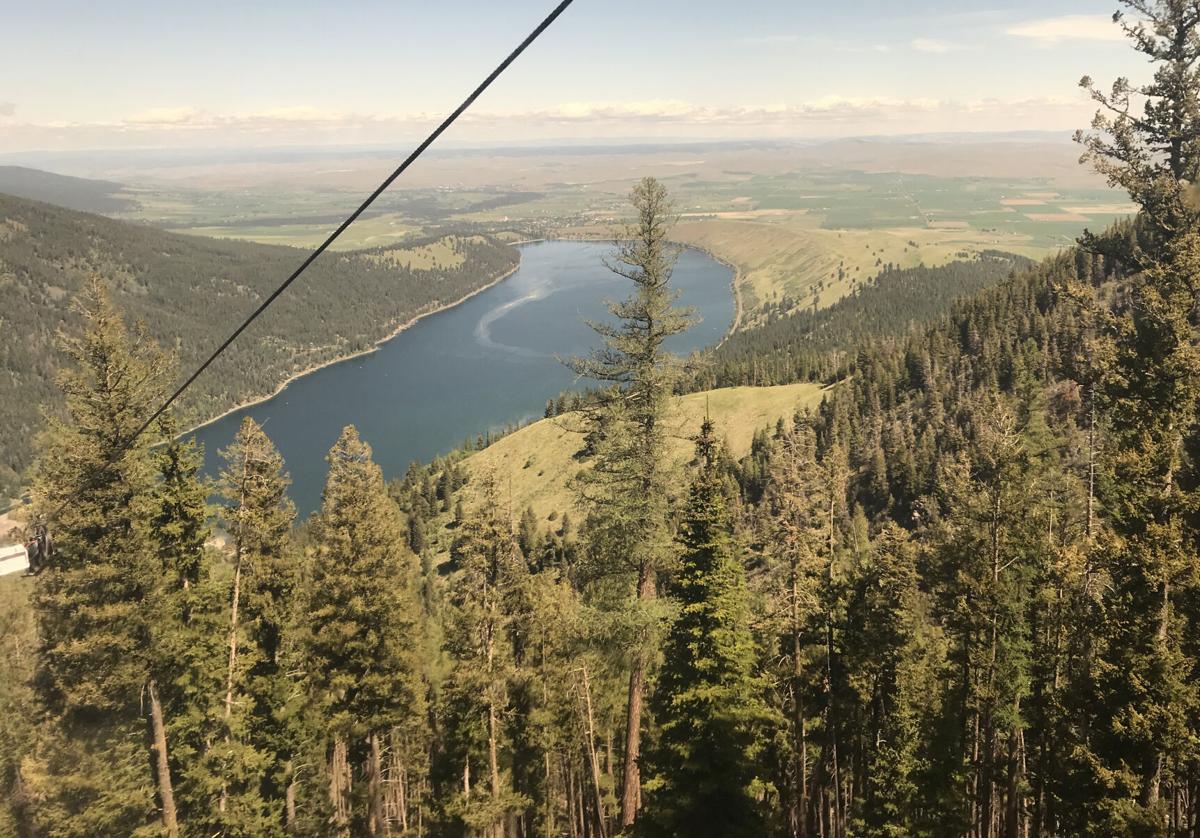 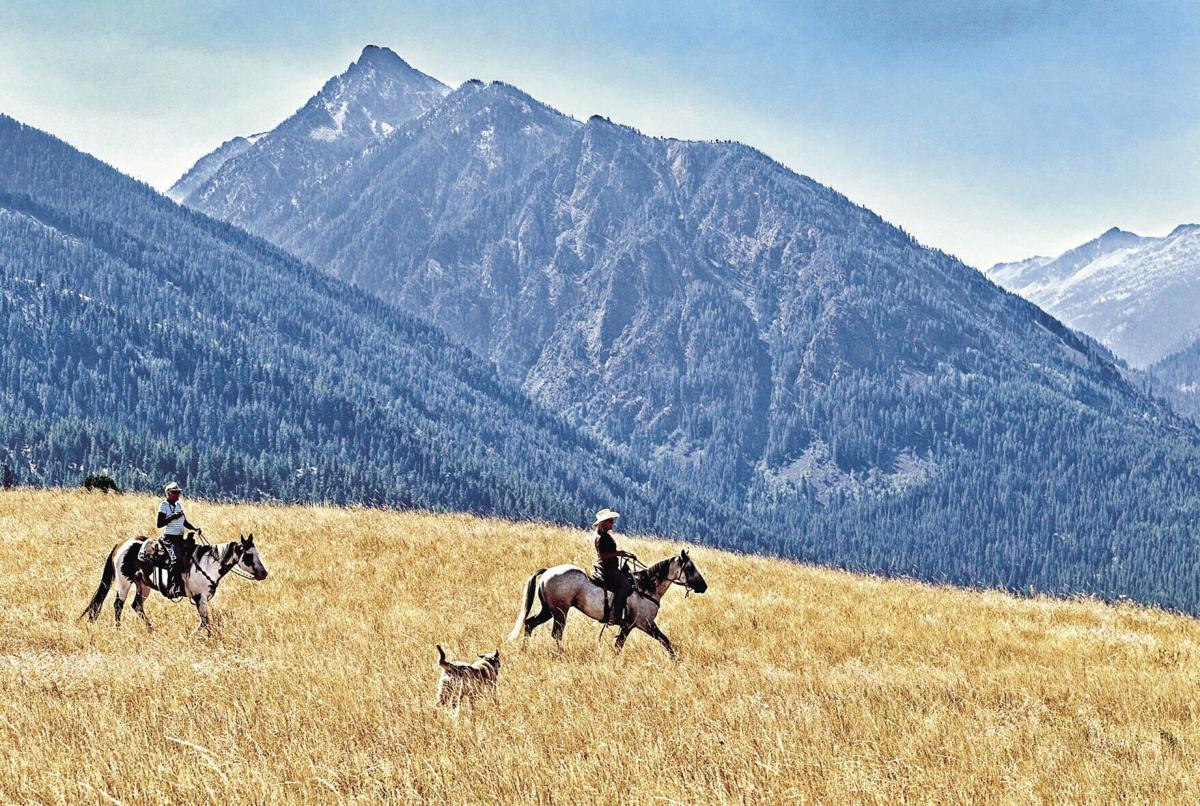 Horseback riders and their dogs enjoy a ride atop the East Moraine above Wallowa Lake. The Wallowa County Board of Commissioners will be taking public comments that can include what activities should be allowed or restricted on the moraine.

Horseback riders and their dogs enjoy a ride atop the East Moraine above Wallowa Lake. The Wallowa County Board of Commissioners will be taking public comments that can include what activities should be allowed or restricted on the moraine.

ENTERPRISE — During an otherwise quiet meeting Wednesday, June 2, the Wallowa County Board of Commissioners had to revisit the documents they approved May 19 when Joseph resident Mildred O’Callaghan returned to express concerns about what she envisions are too many types of activities to be allowed on the now-county-owned East Moraine above Wallowa Lake.

Last month, the commissioners approved the East Moraine Baseline Documentation Report and the East Moraine Governance Document, both of which are steps toward establishing a final management plan for the East Moraine. The land is largely a 1,791-acre parcel acquired by Wallowa County in January 2020 from the Ronald C. Yanke Family Trust. More recently, another 33 acres were donated to the county by the Oregon Parks and Recreation Department, bringing the total to 1,824 acres. The northern end is mostly grassland, while the southern end is forested.

O’Callaghan said she was concerned there would be too many people doing too many different recreational activities on the land under the agreements.

“The last time I was here (May 19), I was concerned about the grant for the conservation easement and that there must’ve been some kind of mistake about allowing too much recreation,” she told the commissioners Wednesday. “In the legal summary that you approved, I felt like there could be some amendments made before you do the real conservation easement at a later date.”

She said she didn’t believe the documents the commissioners approved went along with previously approved plans for the land.

“In the 1980s when I was here, the county (took measures) to protect that space up there as open space because I knew there was a wildlife corridor,” she said.

She said a map was made for the U.S. Forest Service to include in a baseline document then.

“In ’96, again they got a lot of people together like you did to look at a baseline document,” she said. “They gathered people in ’96 and I was there, too, and everyone felt like they should identify any individual resources on the moraine itself, not just on the open space to be protected. Again, the wildlife was an important issue.”

“If I might, what would you suggest?” Commissioner Todd Nash asked her.

O’Callaghan said she feared that, as written, the current documents allow for too much access for too many activities, beyond the traditional ones.

“When it comes to public access in this document, you said the public shall have a perpetual right to access and otherwise use the property for the usual activities,” she said. “I think you need to specify some of those activities because I’m worried about in winter, cross-country skiing, snowboarding and especially mountain biking — they make their own trails. They come to a place and say, ‘We want to ride there.’ and they go on down. I was hoping you would have a definition of what’s allowed.”

Nash said that what it comes down to is that “wildlife and people, they do mix in a certain manner because there are a number of deer that linger in the cities — the city of Enterprise, the city of Joseph and, long term, at Wallowa Lake — they coexist fairly well, although there’s some conflict.”

Commissioner Susan Roberts emphasized that the documents O’Callaghan was looking at and reading from were preliminary.

“This document you’re looking at is the baseline, it tells us what’s there today, the day we signed,” Roberts said. “It was a thorough examination of the property to delineate everything that’s there so that in the future, the committee makes decisions about what they’re going to do — if they’re going to do anything, if they’re going to make repairs or close trails or close a certain road for a period of time — they can look at the baseline document and know what was there on the day that this was finalized. All of these things will be out for public review, once the commissioners have gone through the process of approving them.”

“But you have already approved a legal summary of it,” she said.

Roberts stressed that the documents were approved May 19, not adopted.

“I would hope you can amend some of the things in it,” O’Callaghan said.

“That’s the plan,” a frustrated Roberts said. “I think you’re being obtuse on purpose. Those documents will go out for public review. At that time, you can make all your comments and points, along with the rest of the public.”

Roberts said she expects the public comment period will happen in late summer and the completed plan will be adopted by the end of the year.

“We will be moving forward at a pace that gets us to the adoption point by the end of the year,” she said.

But O’Callaghan still wanted to get her points across that there should be only “low-impact” activities so as not to disturb the wildlife and to limit access. She also didn’t like the idea of making the public land “so public.”

“You need to get human density down up there,” she said.

The commissioners encouraged her to submit her input during the public comment period, but no one can expect to get everything they want.

In other matters at Wednesday’s meeting, the commissioners:

• Accepted resignation of Mackenzie Walters from the county Planning Department.

• Appointed Garrett Lowe to the board of directors of the Wallowa Union Railroad Authority.

• Approved liquor license for a July 2-3 annual event in Troy for Douglas Witherrite who runs the Wenaha Bar and Grill in Troy.

• Approved an easement permit for Andy Munsey, who wants to put sewer line on Golf Course Road just outside of Enterprise.

• Approved an easement permit for John Harris, who is putting driveway at house being built on Lake Shore Drive near Wallowa Lake.