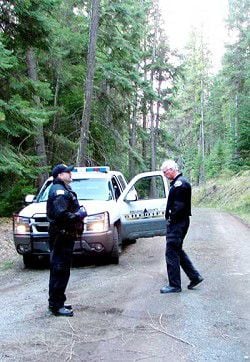 <I>Elane Dickenson/Chieftain</I><BR>Sheriff's Detective Neil Rogers (left) and Undersheriff Steve Rogers maintain a road blockade near the campground where the pair fired on a man who aimed a gun at them. 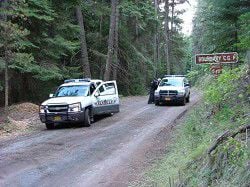 Neil Rogers, dark cap, and Steve Rogers, white hair after the fatal shooting of Roy S. Bass, Jr. on Oct. 7 at the Boundary Campground outside of Wallowa. Photo by Elane Dickenson.

<I>Elane Dickenson/Chieftain</I><BR>Sheriff's Detective Neil Rogers (left) and Undersheriff Steve Rogers maintain a road blockade near the campground where the pair fired on a man who aimed a gun at them.

Neil Rogers, dark cap, and Steve Rogers, white hair after the fatal shooting of Roy S. Bass, Jr. on Oct. 7 at the Boundary Campground outside of Wallowa. Photo by Elane Dickenson.

A Wallowa County Grand Jury has ruled the Oct. 7 police shooting of a Wallowa man as a justifiable use of force.

The details of the case, as presented to the Grand Jury on Oct. 16, were released in a lengthy document Oct. 19. The testimony shows that the two Sheriff's officers involved in the fatal shooting of Roy S. Bass, Jr. at the Boundary Campground on Bear Creek, attempted a peaceful arrest and shot Bass three times when he pulled a loaded pistol on them.

Undersheriff Steve Rogers fired twice and Detective Neil Rogers once as Bass drew his pistol upon approaching to within 20 feet of the officers. Bass died of the gunshot wounds.

According to testimony, the bizarre incident began that Wednesday when three US Forest Service employees on-site at the Boundary Campground were discussing the felling of a tree on an embankment at the campground.

One of the USFS employees happened to look over his shoulder and saw a man, later identified as Bass, standing approximately 20 yards behind him, pointing a handgun at his back. The USFS employee said he heard a metallic click, like a dry fire of a gun. When Bass realized he had been seen he lifted the gun by cocking his elbow. The USFS employee testified that at first it didn't register what he had seen, so he turned back to his conversation with his workmates, but then realized what he had just seen and heard and turned back toward Bass, again finding the gun pointing at his back. This time Bass moved the gun out from his body about 45 degrees.

The USFS employees workmates now noticed the behavior of their companion and also looked back to see the man moving the handgun to the right. Without comment, they moved away from the campsite while keeping the man in sight. According to testimony, the man put the gun down by his side and began reciting what they thought were Bible verses. One of the workers heard a reference to "Hand of God."

One USFS employee stayed at the trail head, just out of sight of the campground to make sure no firefighters or hunters walked into the camp and the other two went down the road to attempt to call law enforcement.

As they passed the entrance of the camp where Bass was, they saw him sitting in a lawn chair to the side of the road. As they passed, he waved to them with a big smile on his face.

Under-Sheriff Steve Rogers took the initial call from dispatch at approximately 2:15 p.m. and, because he had just been assisting Lewiston Police, at first thought the man might be the Lewiston man who had kidnapped his child and was suspected to have traveled to Wallowa County. Rogers got assistance from Neil Rogers and Wallowa County Deputy Dan Courtney. Senior Trooper Mark Knapp of the Oregon State Police was also aware of the kidnapping case and offered assistance. Knapp joined the team along with USFS law enforcement officer Jody Williamson.

Under-Sheriff Rogers obtained further information en-route to the site and realized they were not dealing with the reported kidnapping. At this point, Trooper Knapp, who had been monitoring the radio traffic, recognized the suspect and reported that he had experienced a previous contact at the same campground in July and Bass had been antagonistic during the contact.

After receiving information from the USFS employees, the officers determined they had probable cause to arrest Bass on a charge of menacing, but wanted more information before attempting the arrest.

Radio communication in the valley surrounded by steep mountains is very limited, but officers tested their radios and determined to use an Oregon State Police channel.

USFS law enforcement officer Jody Williamson and Sheriff's Deputy Dan Courtney put coats on over their uniforms and, using the USFS vehicle, drove by the campsite to check the situation out, planning to report back to others. After making the report, they intended to come into the campsite from the trailhead and through the timber with Sheriff's officers Steve and Neil Rogers and OSP Trooper Knapp arriving at the same time, overwhelming the suspect and making the arrest safely.

However, when Williamson and Courtney drove by the campsite, Bass was well off the road and they did not have the opportunity to make an arrest. Furthermore, when they got to the trailhead and started down through the timber toward the campsite, they found they could not establish radio contact with the other officers to make a report.

After a passage of about 15 to 20 minutes during which Steve and Neil Rogers and Knapp heard only microphone clicks when Courtney and Williamson attempted radio transmission, the officers became concerned and decided to proceed up the road. Knapp led with his OSP marked vehicle with the Sheriff' officers behind them in their marked Sheriff's Office vehicle.

Upon arriving at the entrance of the campsite, Knapp could see that the suspect was alone and decided to go past, thinking the Sheriff's officers would follow. However, as the Sheriff's officers approached the camp, Bass approached them, waving them into camp with a smile on his face. Hoping to make contact and a peaceful arrest given Bass' attitude, Under-Sheriff Rogers pulled into the camp site. Knapp saw what was happening in his mirror and turned his pickup around, gunning the engine and throwing gravel.

Both Sheriff's officers immediately noticed that Bass had his left hand deep in his pocket, a holster with a handgun on his right hip, and that he continued to walk toward them. As Steve Rogers stopped the vehicle, Neil Rogers opened his door and exited, ordering Bass to take his left hand out of his pocket. Bass did not comply, his smile turned to a look of determination, and he continued to advance on the officers. Neil Rogers again ordered Bass to remove his hand from his pocket, at the same time drawing his own side-arm and aiming it at Bass. Bass was now just 20 feet away. At this point, officers testified, Bass pulled his left hand from his pocket while simultaneously drawing his gun with his right hand, pointing the handgun at Neil Rogers. Bass was swearing and saying something to the effect of "no way," according to the report. Neil Rogers was backing up and shouted 'don't' and fired one shot, striking Bass in his left shoulder.

After putting the vehicle in park, Steve Rogers has also exited the vehicle. He drew his gun upon seeing the change in Bass' demeanor and started around the front of the vehicle, but realized he would place himself in the cross fire if he continued. He stepped back at the same time Bass drew his gun. Upon seeing Bass aim his gun at Neil Rogers, Steve Rogers yelled 'no' and fired two shots, the first almost simultaneous with Neil Rogers shot, hitting Bass in the left side. The second shot hit Bass in the spine as he turned from the force of Neil Roger's shot to his shoulder.

OSP Trooper Knapp had arrived just as the shots were fired and did not see the exchange. Williamson and Courtney, coming down through the timber from the south, had seen and heard Knapp turning around quickly and had run toward the site. They heard the shots but did not see the incident.

Williamson and Knapp attempted CPR as Neil Rogers called for an ambulance.

According to officers, the entire incident, from the time Under-Sheriff Steve Roger's vehicle entered the campsite to the time Bass was shot, took about 10 seconds.

Detectives from the Baker City and La Grande offices of the Oregon State Police arrived in Wallowa County within hours of the incident, as did member of the press. A search warrant was obtained for Bass' campsite and closed containers. Bass' handgun was found to be loaded, with the safety off. A second loaded handgun was found in a backpack on a picnic table and two hunting rifles were found in Bass' vehicle.

The investigation was conducted by representatives from OSP and Union County Major Crimes Team with the assistance of criminalists with the Oregon State Police Crime Labs in Pendleton and Ontario.

An autopsy performed by Dr. Karen Gunson, the Oregon State Medical Examiner, found cause of death to be gunshot wounds to chest and abdomen. The autopsy reports are consistent with the statements of the officers.

Op-Ed: Our grocers remain on the front lines for us

Nurse shows how fast germs spread even with gloves