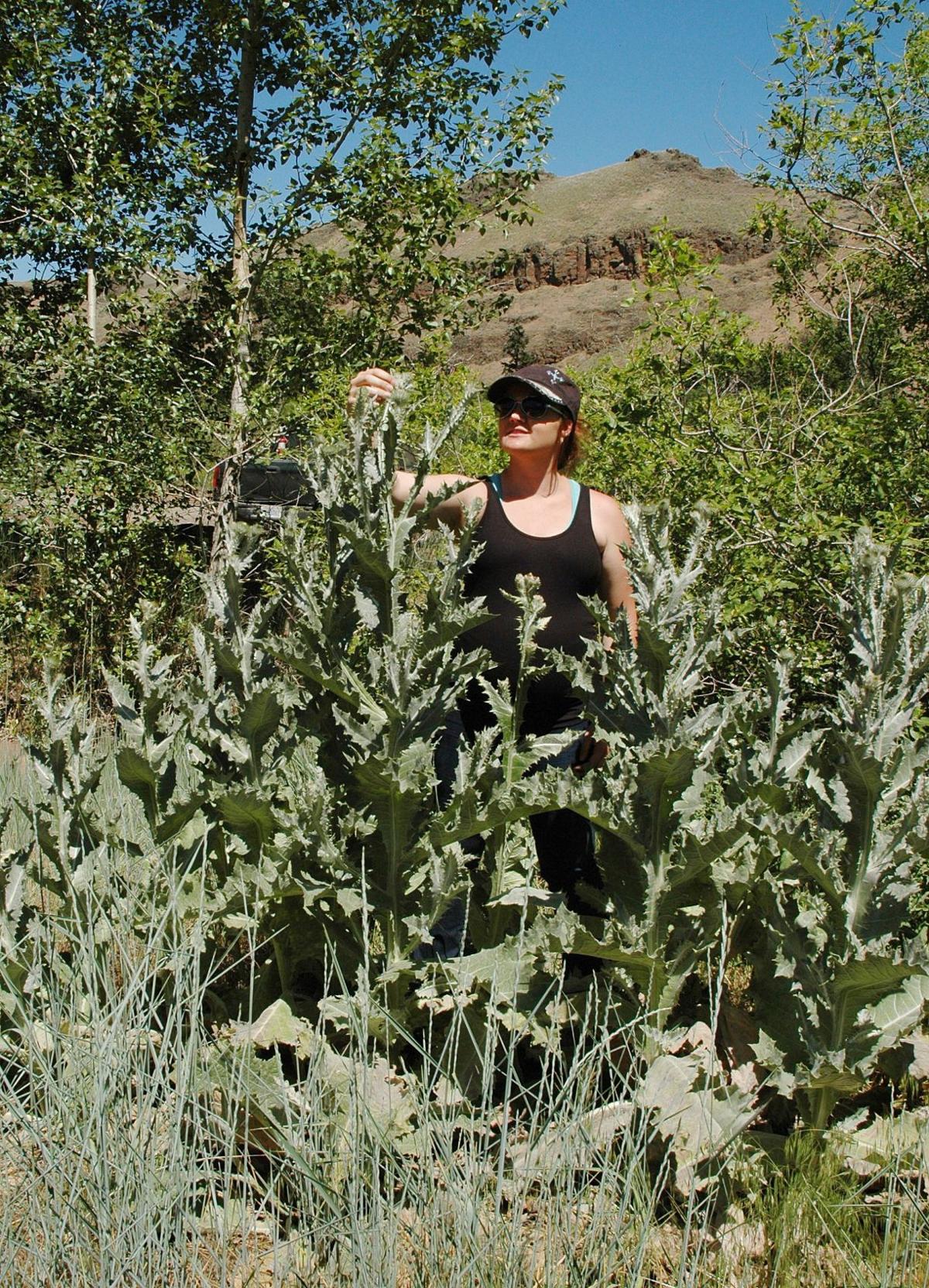 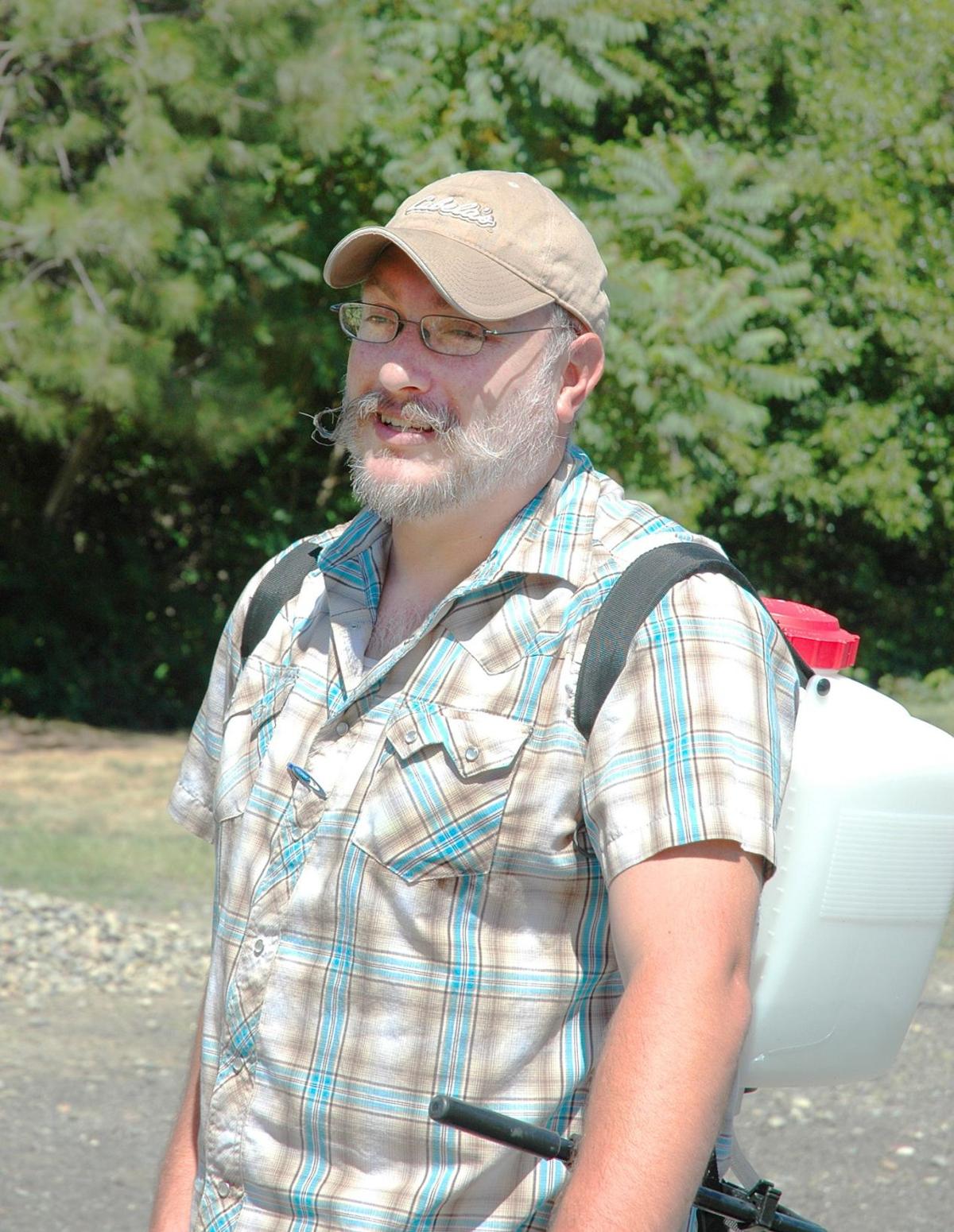 When you climb up into the club cab with the weed warriors and head to Asotin, Wash., for the Multi-County Weed Tour your expectation is that by the end of the day you will know for sure how to kill weeds.

In fact, most years you will become so well educated that you’ll come home with a Certified Pesticide Handler designation.

No certificate this year, but you can count on the education all the same.

You need it, whether you’re a farmer, rancher or smallholder — because if the weeds get the upper hand it is literally the end of the world as we know it.

Weeds in the wilderness can limit appropriate feed for wildlife sufficient to drive the animals out of the area. Indigo Bush, for instance, colonizes on riverbanks and can out-compete willows, ruining bird habitat.

Weeds on the grazing lands not only ruin the value of the fodder, but can poison the livestock or injure humans. For instance, Myrtle Spurge has a milky sap that is so caustic children are burned and blistered by it every year.

Weeds on farmland can also out-compete crops. The number one evildoer in Wallowa County right now is Meadow Hawkweed.

“When you walk up on a mat of Meadow Hawkweed you know it,” said Ashley Spaur, Wallowa County Vegetation Project coordinator. “It gets so thick it chokes out everything.”

No wonder weed hunting is such a big deal. And Wallowa County is the front line in the war on weeds.

Every year Oregon State Weed Board grants in the amount of $1 million are handed out, and at least a third of it goes to Wallowa County.

That money gets added to private funds (The Nature Conservancy, Wallowa Resources, private landowners) and by the end of the year Wallowa County has spent somewhere north of $1 million fighting weeds.

Some of that money goes to help ranchers and farmers fight weeds on their private ground.

“I’ve sent over 80 letters to landowners to tell them how to get their lands inventoried,” Spaur said. Licensed inventory contractors then go out on the farmland and literally cover every foot of it, marking and mapping every weed.

Spaur then inputs that date and issues a map for the farmer or rancher and informs them of their options: hire a contractor or take care of the weeds themselves. Either way, the county vegetation department offers financial assistance through a cost-share program; up to $500 per year. If the county has a specific grant the amount may be even more.

There is a law on the books that allows the county to take care of the weeds and assess a farmer or rancher for the cost, but most Wallowa County farmers and ranchers don’t need the threat of fines to get serious about weeds. It’s in their interest to work with the weed warriors — and they do, said Alan Schnetzky, vegetation manager for Wallowa County.

“(Rancher) Todd Nash took a picture of a weed and sent it directly to me on my phone,” said Schnetzky. “This is so neat. I couldn’t have imagined this a few years ago.”

There are a lot of ways to kill weeds and experts agree that a combined effort, using herbicides, sowing cover crops, and introducing “biologicals” (beneficial bugs) is the best approach.

This year’s tour went to a beautiful field of wheat grass in the Asotin Creek Wildlife Area. Wheat grass is non-native, and pure native is the way any state’s Department of Fish and Wildlife wants to go. “It may not be what you want long-term,” agrees David Woodall, Washington Department of Fish and Wildlife assistant wildlife area manager. “But some of these lands have been so disturbed you can’t get a native to grow. In a perfect world we have true natives, but this is better than weeds. Sowing wheat grass may be a step along the way.”

It’s a good step for the field the tour group examined. Just two years earlier it was a field of thistles over six feet tall. Spraying was immediately effective in knocking down the thistle, but come the following spring the thistles would get a head start over the native grasses and choke them out; thistles win again.

By oversowing the field with fast-growing wheat grass, the weed warriors beat the thistle to the sun and turned the tables on the weed.

Before the wheat grass won, however, that entry point into a popular wilderness area was a public relations nightmare.

“When the public shows up they want to know what they’re paying their fees for. If there are a lot of weeds it makes a bad impression,” Woodall said.

Ironically, it is public usage that helps bring the weeds in. “We have endangered native plants by having access. Every access point is a vector point for weeds,” Woodall explained. “Part of managing each site is a weed control effort.”

Managing weeds will never get easy, the warriors say. It’s labor-intensive. But one of the things the Weed Tour group learned last Saturday is that it doesn’t have to be as dangerous as it has been in the past.

Spraying herbicides involves handling concentrated poisons. Those poisons are diluted for use, down to 3 ounces per acre in some cases. But the pesticide handler is still in danger when he or she mixes several herbicides into the potion.

A bit of good news presented at this year’s weed tour is that herbicide producers are working to make spray handling both safer and more precise.

Farmers and ranchers can now order a custom blend of herbicides premixed to kill the specific weeds you have, on the land you have, significantly lowering the danger to applicators.

Other applications can now be fast-shipped in 15-gallon returnable drums — meaning there is no need to store an inventory or rinse the drums.