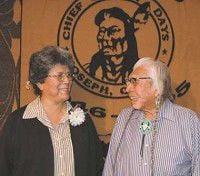 Tessa Kuppinger of Joseph was announced as 2006 Chief Joseph Days Queen at the annual CJD Coronation Dinner on Saturday night at the end of a long day that included a riding competition in a mini-blizzard at Harley Tucker Memorial Arena.

She received hugs and congratulations from fellow court members Sara Freels of Enterprise and Olivia Soares of Wallowa. Kuppinger placed at the top of all three contests - riding, speaking and ticket sales.

Earlier in the evening Horace and Andrea Axtell, Nez Perce elders from Lewiston, Idaho, were introduced as grand marshals of the parade. Horace is a veteran of World War II. His grandfather was born a member of the Joseph band in Wallowa County in 1871, and Axtell and his wife have been leaders on the Chief Joseph Commemorative committee during CJD for many years.

"It feels great," Kuppinger said after she received the queen's tiara from last year's queen, Tricia Kunkle. "I worked hard and my family was my main support. I wouldn't have been able to do it without them."

"I think Tessa deserved it," Freels said after the announcement. "We didn't really care who was queen. We just wanted (the competition) to be over so we can have fun together."

"Being on the court is an honor in the first place," Soares agreed.

Collectively the trio sold $52,608 worth of rodeo tickets - near a record - with Kuppinger the top salespersonat $20,150 worth and the other two girls close together with over $16,000 each. All three will receive a check for a percentage of their ticket sales to help defray money they might have made at summer jobs if they weren't on the court.

During the evening, the three court members modeled their mix and match outfits in a fashion show narrated by CJD clothing coordinator Judy Bothum. At the coronation announcement the court wore for the first time their fringed parade suede outfits, a trademark of the CJD court and an annual surprise because the color changes every year. This year the suedes were bright lime green, accented with sky blue stars and rhinestones.

"These are three of the nicest, best looking young women anywhere," emcee Tony Yost of Baker City, a past president of the Joseph Chamber of Commerce, said of the 2006 court. "Chief Joseph Days is always very well represented and this year is no different."

Kuppinger has two older sisters who are past CJD princesses - Cammie in 1997 and Joy in 2003 - and Soares' older sister Natalie was a princess in 2002.

Cammie and Mike Hale take over as court chaperones now that the queen's competition is over.

Freels was Elgin Stampede Court queen in 2004, with Soares a princess on the same court. Soares was also a member of the Eastern Oregon Livestock Court in 2005.

Grand marshalsFollowing a few words from last year's grand marshal, Jim Probert, the Axtells were introduced by Tim Nitz, the Joseph chamber's representative who works with the commemorative committee each year.

"I can't tell you what a big honor it is (to introduce the grand marshals). I have a long history with this couple, and I love them to death," Nitz said. He named several councils of elders that they were involved in and added that Horace is the leader of the longhouse out of Lapwai, Idaho, while Andrea is head cook, the two main positions.

He noted that the Axtells have traveled over to Chief Joseph Days for many years - Horace off and on since 1947 - and that they were at the center of an effort to revitalize the CJD encampment in the late 1980s to include involvement from three reservations, which continues to the present.

Nitz encouraged those who don't already know the Axtells to stop by the encampment during CJD or to read Horace's autobiography, "A Little Bit of Wisdom," which was published a few years ago.

He said the Axtells had announced that they intended to retire from their leadership role on the committee at the end of last year's CJD and noted that "four people are taking their place." One of them, their daughter Brenda Axtell, who has been in training to try to fill her mother's shoes, accompanied her parents to the Joseph dinner Saturday.

"We like to come and get reconnected to the land here and get acquainted with the people who live here now," said Horace Axtell, speaking for himself and Andrea. "Thank you very much. I hope we will be together and have a great time at Chief Joseph Days. I'm also thankful that the Chief Joseph rodeo is named after a man who was a great leader of our tribe," he said, adding, "The most important thing we do is have this friendship."

Horace, 81, and Andrea, 66, have eight children, 26 grandchildren and numerous great-grandchildren.

Yost recalled a couple of hours he spent with the Axtells and other at the encampment during CJD when he was chamber president as some of his most enjoyable time. "I'm so glad to have them as our grand marshals this year," he said.

Yost thanked Betsy Henry and Pearl Sturm, longtime co-chairs of the coronation event, noting the pair had announced their retirement after this year. He also said that former rodeo co-director Craig Willis and his wife, Cindy, had both chosen to "take a step back" from CJD leadership roles this year.

The 2005 CJD court of Kunkle, Julie Butterfield and Madeline Smith gave a bucketful of gifts - and some advise - to their successors. "You can never have too much hairspray," they said, pulling an aerosol can out of the bucket.