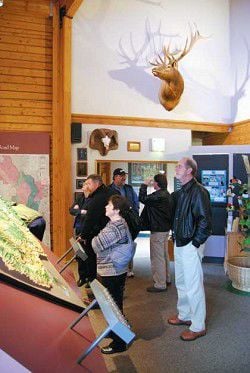 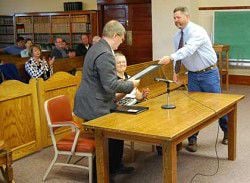 Wallowa County citizens had their chance Thursday to grill the Oregon Department of Land Conservation and Development (DLCD) commission members about land use policy during its formal meeting in the County Courthouse.

No one showed up.

However, the commission members got an earful from local leaders during a more informal meeting that followed a bus tour around the county.

As part of an effort to learn more about the entire state, the commission is scheduling its regular meetings away from its home in Salem. Last week, it was Wallowa County's turn.

The trip began with a bus tour starting in Wallowa. The members and their staff were shown the Community Smallwood Solutions pole plant and told that it had been sold to Upstream 21 of Portland.

The new buyer plans to expand production to two shifts, meaning they need to find a new location since its current location is adjacent to residential housing.

After passing the new assisted living center in Wallowa, the group stopped at the Forest Service visitor center to see the parts of the county they wouldn't see on the abbreviated bus tour.

Next, the bus took the group to see the new hospital in Enterprise before heading for Joseph. The group left the bus to walk Main Street, first being shown the bronze statue outside Joseph City Hall by Mayor Peggy Kite-Martin.

The group next headed to the Valley Bronze gallery for a visit before boarding the bus and heading for Wallowa Lake. Along the way, County Commissioner Dan DeBoie explained the East Moraine Measure 37 issue, telling commission members the that county is trying to find a way to compensate the landowners in order to retain its status.

The group then saw the various land uses occurring at the head of the lake followed by a park ranger guided tour of the state park.

Once back in Enterprise, the panel hosted a round table discussion, attended by local leaders from Wallowa, Enterprise, and Joseph in the Toma's building.

"In reality, land use planning is in deep trouble," County Commissioner Mike Hayward told the group. "People say, 'I want to do what I want to do on my land, and I want to tell my neighbors what to do on their land,'" he said. He never used to see lawyers at planning meetings, he said, but now he sees one at every one.

Enterprise City Administrator Michelle Young brought up the issue of affordable housing. She says there is a housing boom in Enterprise with three new subdivisions underway. However, the prices for these homes are not for moderate income levels, she said.

Joseph Mayor Peggy Kite-Martin talked about the changing economy with the loss of many timber industry jobs. "We need to step up to protect what we have," she said. Water, she said, is where we should start and called Wallowa Lake the "crown jewel."

Finally, the group discussed impact fees as one solution the county could consider to help defray costs occurred when developers add to the need for schools, police, fire and other government services.

Commission Chairman John VanLandingham said after the meeting, "We hear the same concerns in a lot of places, so I don't know that I heard anything that said, 'Aha, we need to change this.' We know that the program needs to work better, and I politely encouraged your local interest groups to help us do this. One of the reasons we're here is to see we're not a bunch of pointy-head bureaucrats from Willamette Valley who are trying to unreasonably control their lives. We're trying to reasonably control their lives, not control their lives but that's how they see it," he said.

County Commissioner Dan DeBoie agreed, "I think it's good to be face to face. LCDC gets to be this nameless thing that does negative things and it's always good to meet with them face to face. Realize they may not agree with it, but they at least consider the issues and struggle with issues. They're difficult things to balance," he said.

On Thursday, the board held its official meeting in the courthouse, beginning with a ceremony to honor County Commissioner Ben Boswell for many years of service to Wallowa County and the people of Oregon.

"Working here in Wallowa County, and working with and around Ben Boswell, helped shape my belief of what it meant to be a individual working in the public sector," Jon Jinings, Eastern Oregon Regional Representative to the DLCD, said. "And it helped me understand it meant you should work hard, you should be honest, you should be fair, that you should be proud of where you're from, and you should stick to your guns and you should do what you think is right and always do what you believe is best for the people you represent. Mr. Boswell's been a role model of mine, a hero of mine ... he's a great Oregonian," he said before presenting a plaque to Boswell.

After the ceremony, Boswell said, "I just tried to show up. The saying is that the country's run by those who show up; if you don't, you've got nothing to complain about. Stopping occasionally to take stock in what your participation has been and what your successes have been is a good thing. I do it all for the people of Wallowa County. They are the beneficiaries and supporters of this effort.

"As the chairman said to me a minute ago, this is the kind of stuff people say at funerals. I'm glad we didn't wait that long."