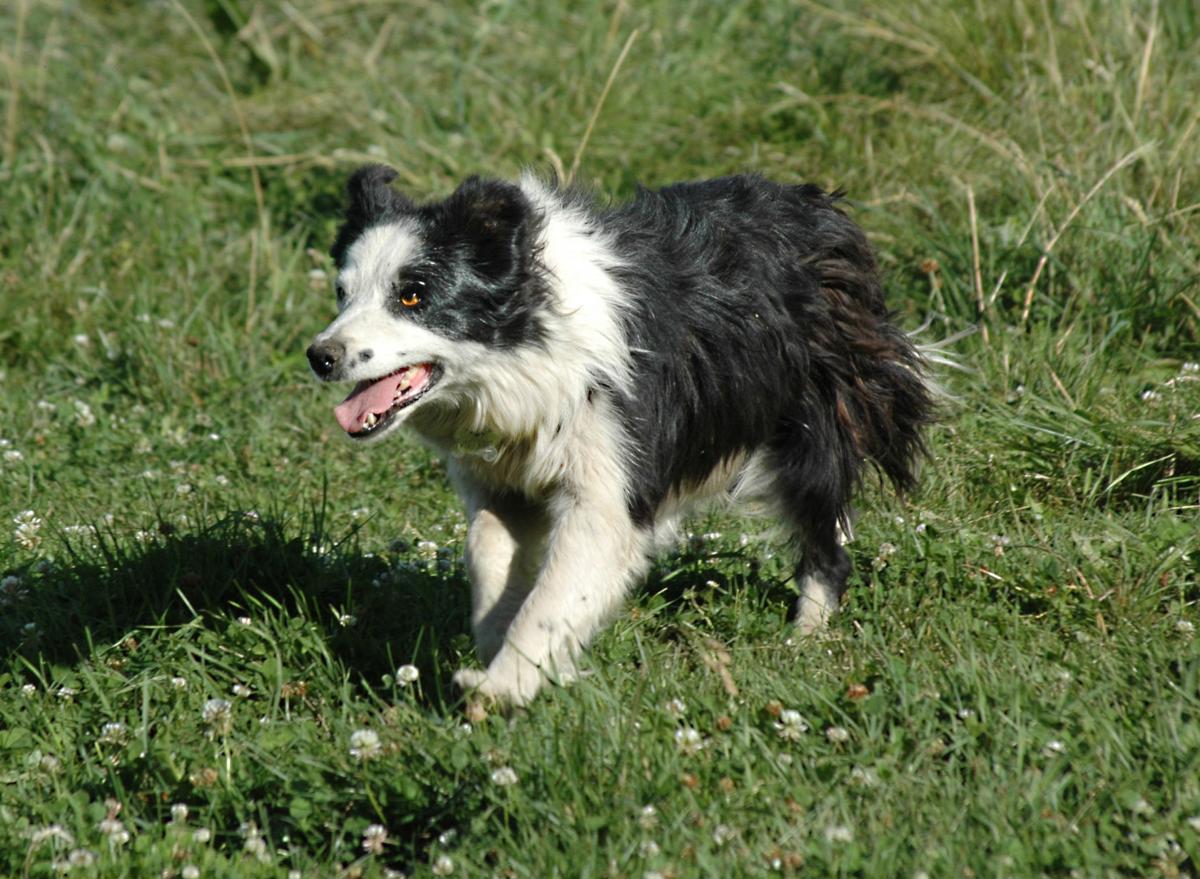 Kathleen Ellyn/Chieftain Allie, a 7-year-old Border Collie, doesn't have papers, but she's got an advanced degree in “cattle working” after more than six years running 1,000 head of cattle with Jill McClaran. Allie will compete at the upcoming Stockgrowers Rodeo in the working dog class. 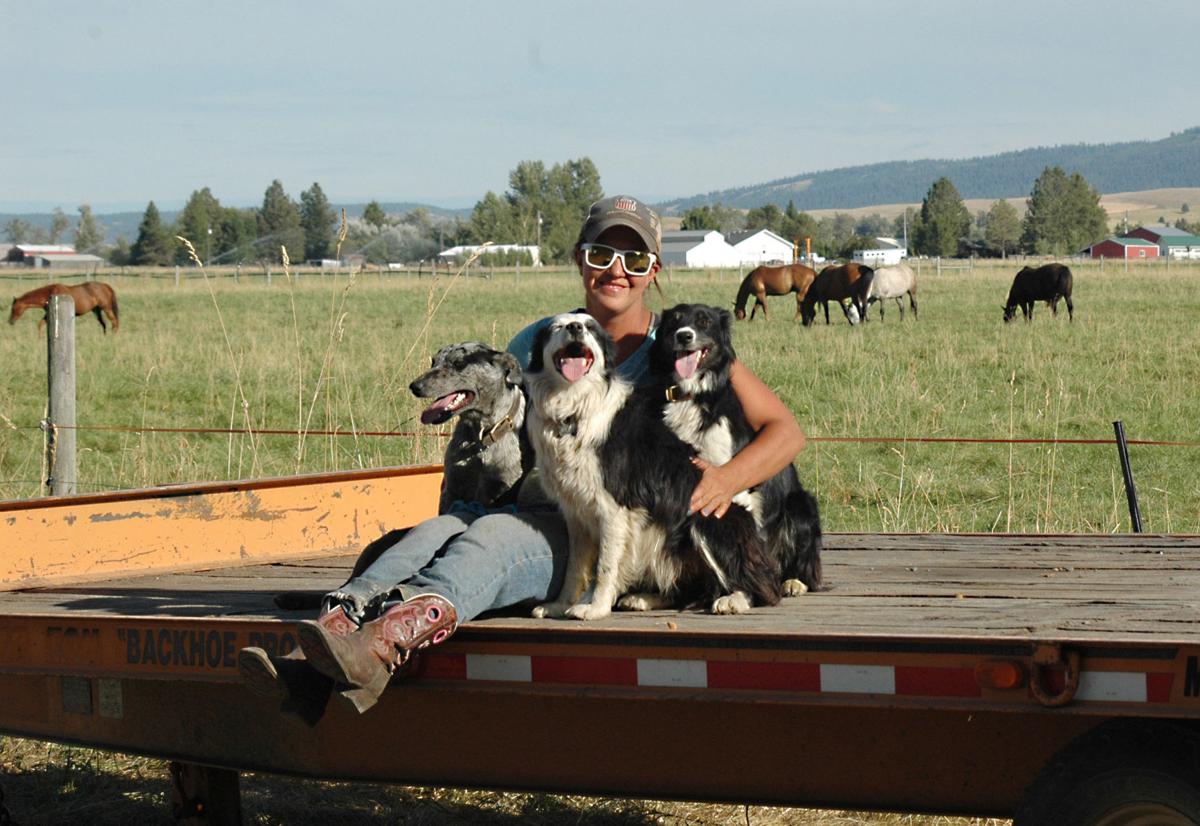 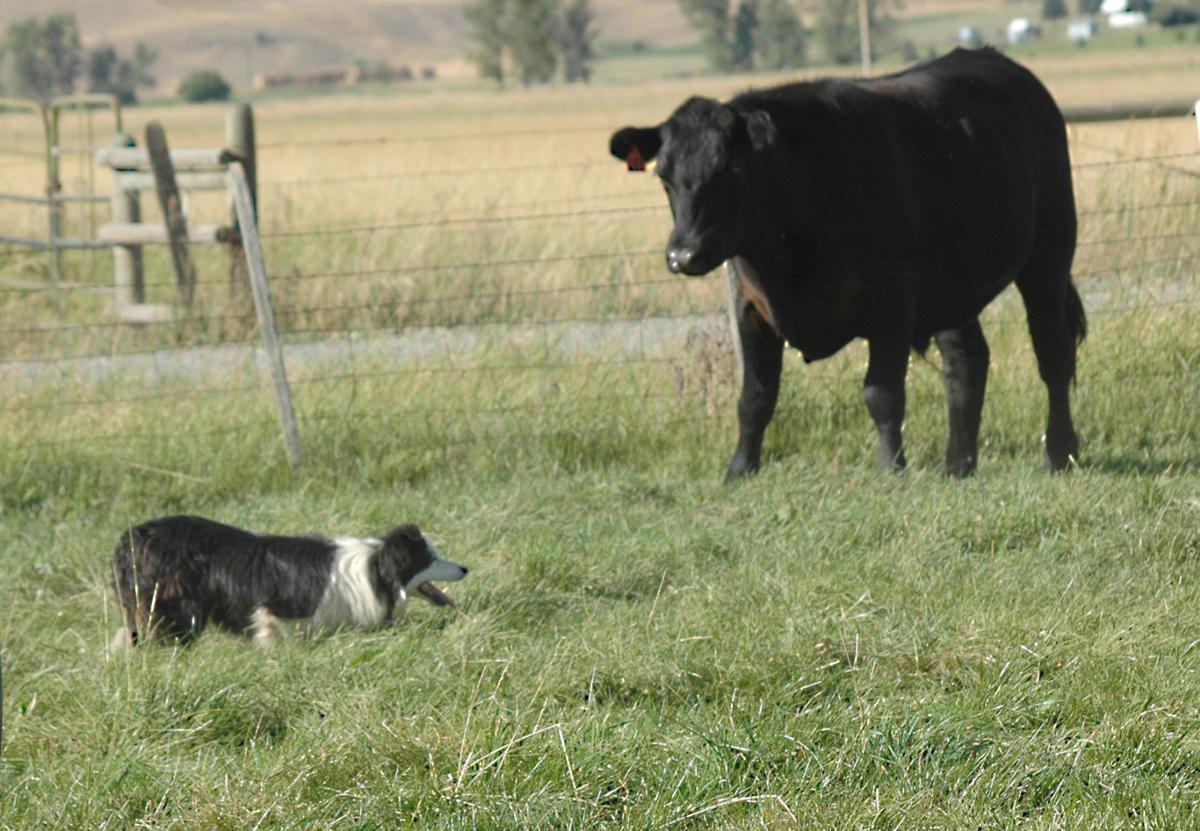 Kathleen Ellyn/Chieftain Allie demonstrates her creep, creeping up slowly and using her eye to let the cows know she's talkin' to them. Clearly, she has their attention and respect.

Kathleen Ellyn/Chieftain Allie, a 7-year-old Border Collie, doesn't have papers, but she's got an advanced degree in “cattle working” after more than six years running 1,000 head of cattle with Jill McClaran. Allie will compete at the upcoming Stockgrowers Rodeo in the working dog class.

Kathleen Ellyn/Chieftain Allie demonstrates her creep, creeping up slowly and using her eye to let the cows know she's talkin' to them. Clearly, she has their attention and respect.

When the trio of dogs jump out of Jill McClaran’s truck at the Joseph place they limp to patches of grass and flop down. Looks like they’ve put in a hard day working McClaran cattle. The extended McClaran clan manages 1,000 cow/calf pairs on private and federal land.

Jill’s dogs are small; two whip-thin, rawhide-tough black and white Border Collies bred by Brian Boquet and a sleek little gray-spotted, Hanging Tree dog. When you see them with cattle you don’t see how something that small can have the kind of authority they do.

But they do have that authority. A little bit of a dog, like Allie, who at age 7 is an “older dog,” can turn a whole herd of 1,200-pound cattle, mostly by fixing them with an intimidating look. Once she’s got their attention, and then gotten them moving, she can pretty much put them where she wants them.

“They say you only get one good dog in your lifetime and I’ll probably never have another like Allie,” Jill says.

Skeeter, a younger Border Collie related to Allie, has less “eye” and likes to run. She’s the streak you’ll see racing to the front of the herd to turn it or zipping in behind a recalcitrant cow to nip it forward.

Spark, the spotted gray dog, is just a year old with a lot yet to learn from Allie, but Jill can already see his personality. He’s calmer, he likes to work close, his threat is more physical, and he’s a tougher, stronger kind of dog. That’s what the Hanging Tree dogs are supposed to be, tougher. The breed is a mix of three breeds: Border Collie, Kelpie and Catahoula. The first two are herding dogs, but a Catahoula is a hunting dog and the Hanging Tree dogs have kept that tendency to hunt the cattle and then “bay up” their quarry (bark to say “I’ve found the cows”). “That’s a plus when you’re moving cattle in timber,” Jill says. “They bay when they’ve found the cows and you know right where to ride.”

The Border Collies are limping today because they’ve got sore paws, Jill says. She and the dogs have been moving cattle on an allotment in the Wallowa-Whitman National Forest for nearly a week. “They work four to five days a week, normally,” she says. “But this was really rough country and it was dry. It’s hard on their pads.”

Skeeter is limping a little worse than Allie, because Skeeter got kicked by a cow; hazards of the game.

Spark, however, looks fresh. It helps to be younger, but Hanging Tree dogs are also better suited for the hot weather and rough country.

At least two of the dogs will compete at the Aug. 15 Stockgrowers Rodeo in the working cattle dog class. Today, Jill is thinking it will be Spark and Allie and she’ll give Skeeter time to heal from that kick.

But first, the McClaran cattle drover’s team of Jill, Allie, Skeeter and Spark will show the newspaper reporter how they work cattle.

“Come on dogs,” Jill calls cheerfully, and all three dogs leap to their feet and race toward the pasture where the grass-fed cattle lounge in knee-deep grass.

“They love it,” Jill says with a grin. “If you take your eyes off them for a while, doing something else, they’ll get out there and make their own game of moving cattle.”

Forty pictures later Jill calls, “That’ll do!” and the dogs flop in the grass by the cattle and look back over their shoulders at her. “Are you sure?” their expressions say.

“Come on,” Jill says, and they race back toward her. She pauses to give them some loving.

“Obviously I love being a cattle rancher,” she says as the dogs cuddle around her. “My granddad, Jack McClaran, always said, ‘you either need a good dog or a good horse.’”

Jill smiles with satisfaction. She’s more into horses, she claims, but maybe that’s because she got lucky right off with a good dog like Allie.

When they get back in the truck Allie calls shotgun. She’s got the seniority, Jill says. “The other dogs ride in the back of the truck,” Jill says. “We can have three people in the front seat and Allie still gets to ride shotgun.”

The Wallowa County Stockgrowers Rodeo will begin Saturday, Aug. 15, with the annual breakfast meeting at 7 a.m. at Cloverleaf Hall in Enterprise.

The Ranch Rodeo starts at noon at the Wallowa County Fairgrounds in Enterprise.

To top off the day everyone is invited to the traditional dinner and dance at Cloverleaf Hall, which starts with a social hour at 6 p.m. and beef barbecue dinner at 7 p.m. followed by awards and a dance with live music.