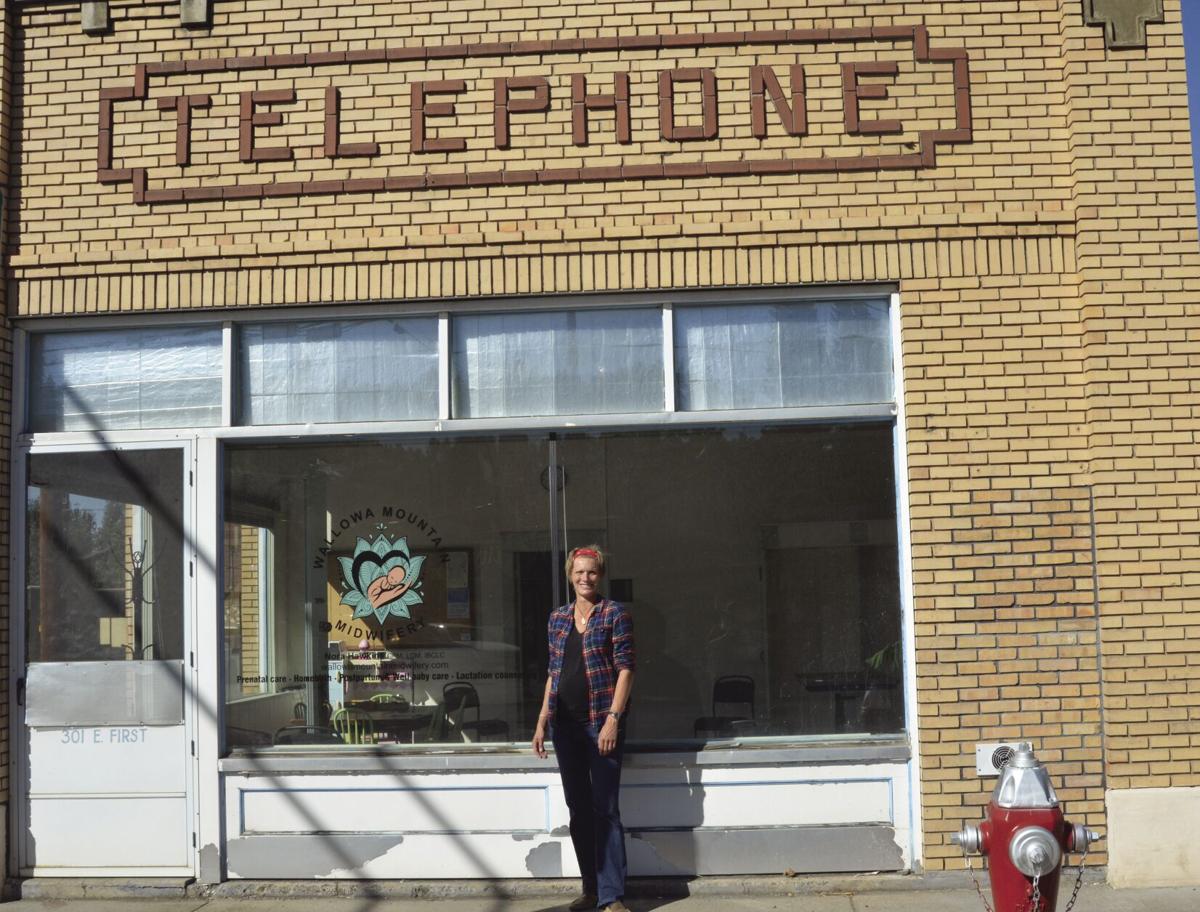 Nora Hawkins stands in front of her new Wallowa Mountain Midwifery in Wallowa, on Wednesday, Sept. 29, 2021, which is in the former Home Independent Telephone Co. building. 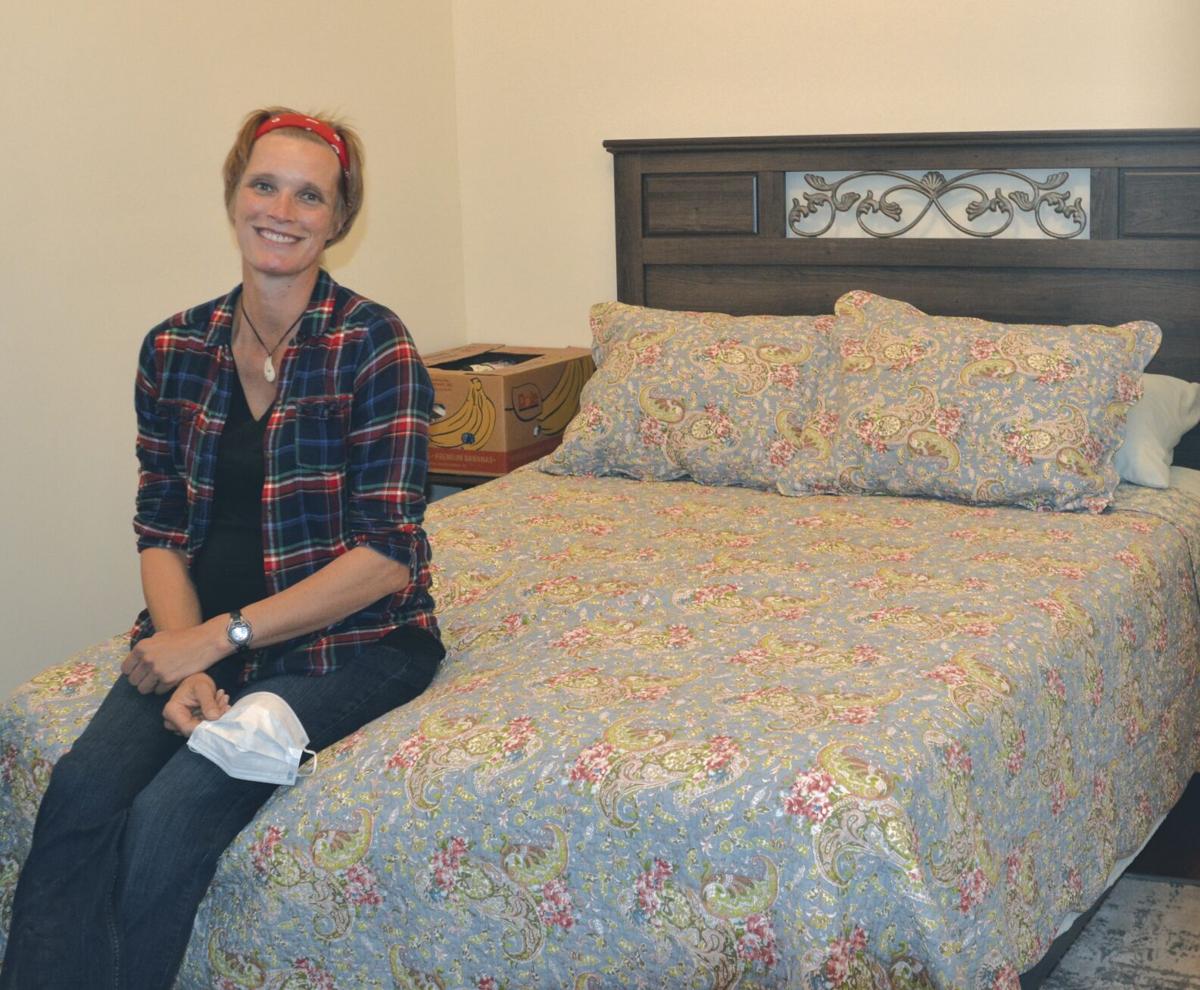 Nora Hawkins sits on the bed in one of her two examination rooms Wednesday, Sept. 29, 2021, at her recently opened Wallowa Mountain Midwifery in Wallowa. 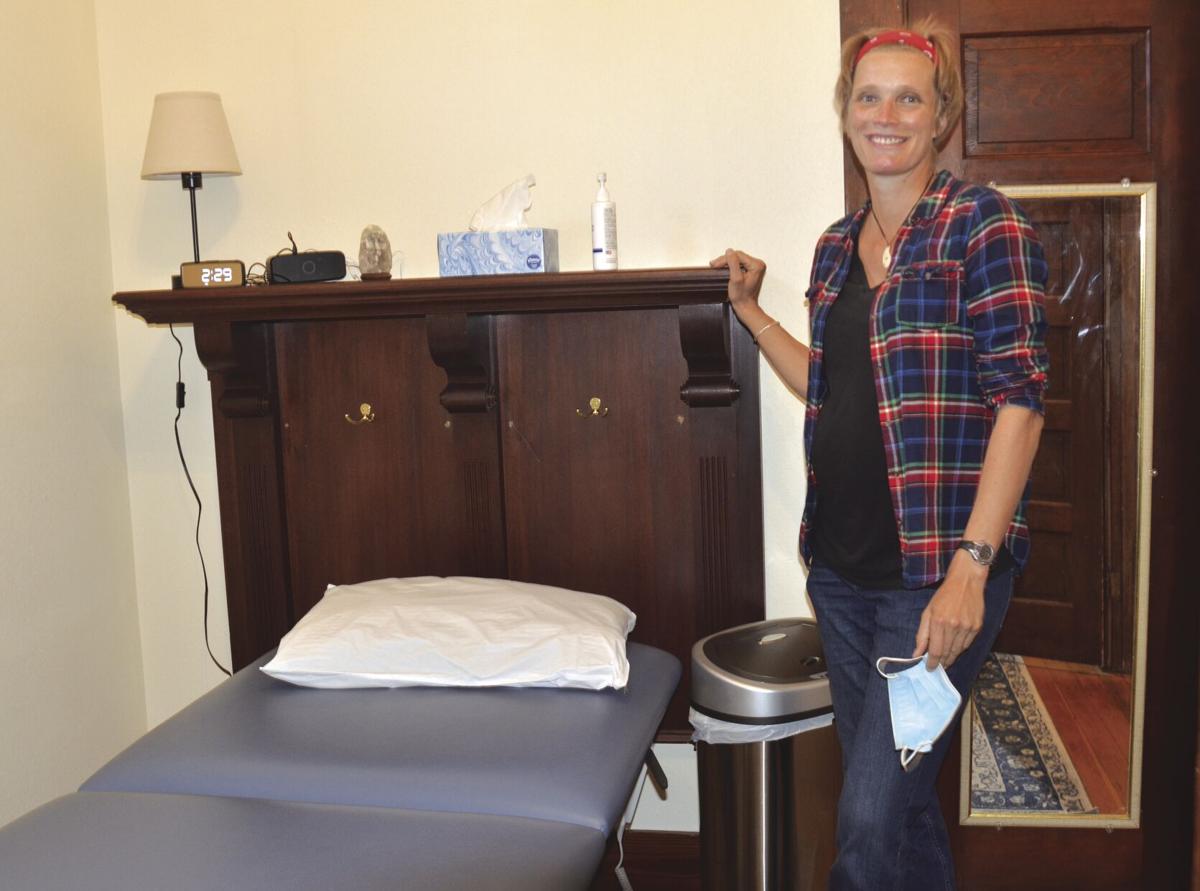 Nora Hawkins stands in the more clinical-appearing of her two examination rooms Wednesday, Sept. 29, 2021, at her recently opened Wallowa Mountain Midwifery in Wallowa.

Nora Hawkins stands in front of her new Wallowa Mountain Midwifery in Wallowa, on Wednesday, Sept. 29, 2021, which is in the former Home Independent Telephone Co. building.

Nora Hawkins sits on the bed in one of her two examination rooms Wednesday, Sept. 29, 2021, at her recently opened Wallowa Mountain Midwifery in Wallowa.

Nora Hawkins stands in the more clinical-appearing of her two examination rooms Wednesday, Sept. 29, 2021, at her recently opened Wallowa Mountain Midwifery in Wallowa.

WALLOWA — Want to call someone in Wallowa to get a baby delivered? Try dialing the old Home Independent Telephone Co. building downtown.

Actually, the historic building is where Eleanor “Nora” Hawkins has moved her midwifery practice, Wallowa Mountain Midwifery, from where she both visits with expectant mothers and reaches out to them in their homes.

A midwife specializes in child delivery, pre- and postnatal care. After returning to school to become a midwife and then practicing briefly in Central Oregon, she moved home and opened her practice in 2017. She has seen clients primarily in their homes until now.

“Midwives practice a model of care that focuses on individualized patient care and a thorough, informed choice about every step of pregnancy and birth,” she said. “Rather than having a baby at home, a birth center or in the hospital, midwifery care is the standard in much of the world.”

During an interview Wednesday, Sept. 29, she said the U.S. is one of the only places where physician care is the standard for low-risk pregnancies.

“But in Europe, in Australia, in Canada, you go to your midwife,” she said. “Having an OB (obstetrician) is something you’d do only if you had a complication — a risk factor — in much of the world.”

She said midwifery care very much parallels the care an obstetrician would give.

“We do the same prenatal visits, the same blood work, lab work, the same ultrasounds, the same vitals and statistics to monitor both fetal and maternal well-being,” she said. “It differs in that midwives are just specialized in the child-bearing year of a woman, so I don’t do all of the other things a doctor does.”

That “child-bearing year” is the nine months of pregnancy and the first three months of a child’s life.

Also, since a midwife specializes in child delivery, pre- and postnatal care, she does not do or have training in many of the other skills a general practitioner does.

Hawkins, who is the sixth generation of a local family, is not the first in her line to be a midwife. Her great-grandmother, Mae Schaeffer Hawkins, was a midwife in the lower valley during the 1920s and 1930s.

“I did not know that when I wanted to become a midwife. My dad told me after I’d gone back to school, ‘That’s what my grandmother did.’ Barter was common and she used to trade things to people who didn’t have money,” she said. “There are various things around the ranch that came from her delivering someone’s babies.”

Her dad, Merel Hawkins, who is retired now, long ran a ranch on the outskirts of town. Ancestors of Mae Schaeffer Hawkins homesteaded a nearby ranch in the 1870s.

Nora recalls what many of the buildings in downtown Wallowa used to be. Next to the old telephone company — built in 1917, according to a story she showed from the Wallowa Sun — was a bowling alley. Next to that was a movie theater. Across the street, where Wallowa Food City now is, once was an automobile dealership.

“I’m excited to give a facelift to this old building and continue to want to help revitalizing of downtown Wallowa,” Hawkins said.

When not working as a midwife, she said, “I’m butchering chickens, helping run a ranch, being a mother to a 2-year-old and I’m expecting another one soon.”

She said she’ll have a midwife come from Portland a bit before her due date.

Hawkins obtained a matching grant from the Oregon State Historic Preservation Office, which administers the Diamonds in the Rough grant through the Oregon Parks and Recreation Department. She said the grant helped refurbish some of the building’s exterior.

She even displays a sign stating, “This project is funded in part by a Diamonds in the Rough grant from the State Historic Preservation Office.”

With the grant — and her own funds — she was able to get new awnings and masonry work done. She elected to keep the word “TELEPHONE” at the top of two sides of the historic building. She said the former telephone company used the front portion of the office for its switchboards and the rear portion was the living quarters for the operator.

Since buying the building Hawkins said she also put on a new roof and has completed a full remodel of the inside.

“It was in a state of disrepair,” she said.

Prior to opening about a month ago, Hawkins set up two examination rooms — one with a double bed and the other with a typical medical examination table — and a couple of sitting rooms. The front room has a small table and toys to keep older siblings occupied while mom is getting examined.

Hawkins has her office day on Wednesdays. Winding Waters Medical Clinic in Wallowa has also started leasing the building on Thursdays for its clinic to have a space in Wallowa as they prepare to build its own place.

She hopes to have both massage and acupuncture available in the building soon, as well.

She said she believes she’s the only licensed midwife in Northeast Oregon. Although she gets calls from all over Eastern Oregon, she only serves Wallowa and Union counties, working closely with Wallowa Memorial Hospital and Grande Ronde Hospital and their practitioners.

She said she generally charges $4,000 for the package of her services, which includes prenatal care, birth and postpartum care. She said that is less than a mother would pay for a hospital delivery.

One of Hawkins’ top priorities is to give expectant families the options they wish for their deliveries.

“My hope is to preserve the opportunities to have birth choice, the location, the mode, who is attending … the freedom for birth choices of their own,” she said. “It’s not the right choice for everyone. Some families, if they’re low-risk and it works, then great. … I just want there to be choice. … Sometimes that means a family wants home birth; other families choose a package where I provide midwifery care prenatally and postpartum but they have a planned hospital birth, sort of a hybrid option.”

Sometimes those choices mean the mother — or Hawkins — will opt out of a home delivery and decide to go to a hospital. For Hawkins’ part, if she is not totally comfortable with the way the pregnancy is progressing, she urges the mother to go to the hospital and seek a physician’s care.

Such concerns, she said, might come up prenatally or during labor.

“When I have (a mom) transferred, I was glad we did,” she said. “There are some babies who shouldn’t be born at home, who might need a (hospital) team,” she said. “It’s rare — not even once a year that I have to do that — but I’m always grateful to do it; I’m grateful for the team at Wallowa Memorial, for sure. They have been great.”

The decision to transfer from a home birth to a hospital can be made by both Hawkins and the mother.

“As long as it stays low-risk, we go to their home,” she said. “I’m monitoring the mom; I’m monitoring the baby. If I start to see any red flags or yellow flags, I call to say, ‘Hey, we might want to transfer, I’m coming (to the hospital). If I do decide to say ‘I’m coming,’ then something’s changed, maybe concerning fetal heart tones, or maybe mom decides she wants an epidural (an anesthesia commonly given during childbirth) — it could be something that’s very nonemergent.”

Hawkins said one way her midwifery practice differs from a general practitioner is in the postpartum care.

“After the (home) birth, we stay, we clean up, we make sure everyone’s breastfeeding and stable and not bleeding and the baby’s transitioned well,” she said. “Then I come back the next day and at three days and after a week and two weeks and four weeks and six weeks. … I’m seeing moms a lot more in postpartum, but it is the norm in midwifery care in this international model.”

In addition to midwifery care, Hawkins also offers various services as a lactation consultant, often to clients who were not in her midwifery care. These include prenatal breastfeeding classes, nutritional support and personalized care plans to address common and not so common breastfeeding issues.

Overall, Hawkins is a strong proponent of home delivery for normal births.

“If someone becomes high risk and they don’t have a normal, routine, low-risk pregnancy, I would refer them to a hospital and a doctor,” she said. “If they don’t develop any kind of high risks or complications, then they stay with me, I deliver their babies at home.”

Hours: Open Wednesdays or by appointment.