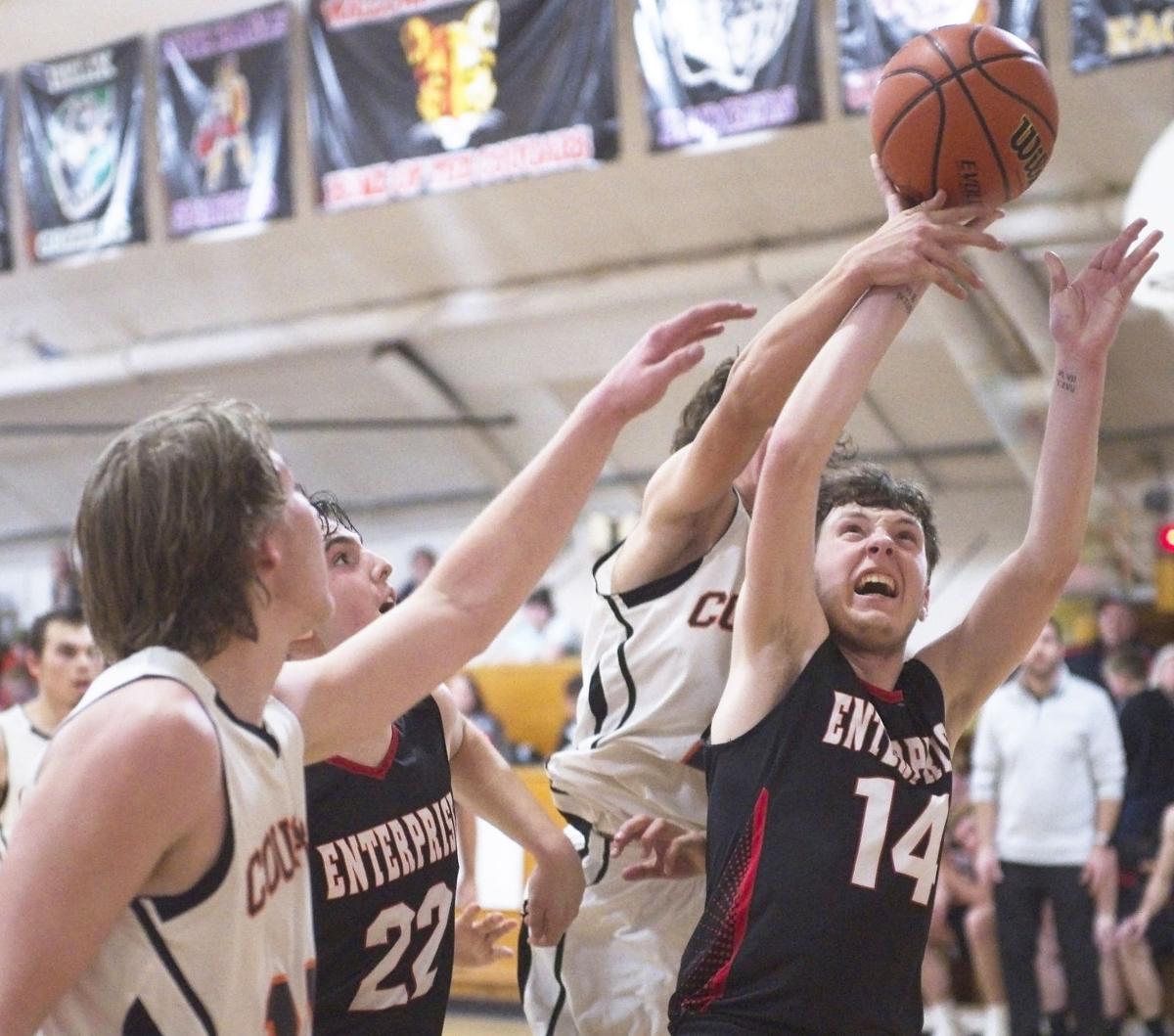 A Cougar player fouls Outlaw Devin Greer in the act of shooting in the final minutes of the intense fourth quarter. Greer sank his free throws adding a little temporary breathing space for the Outlaws. 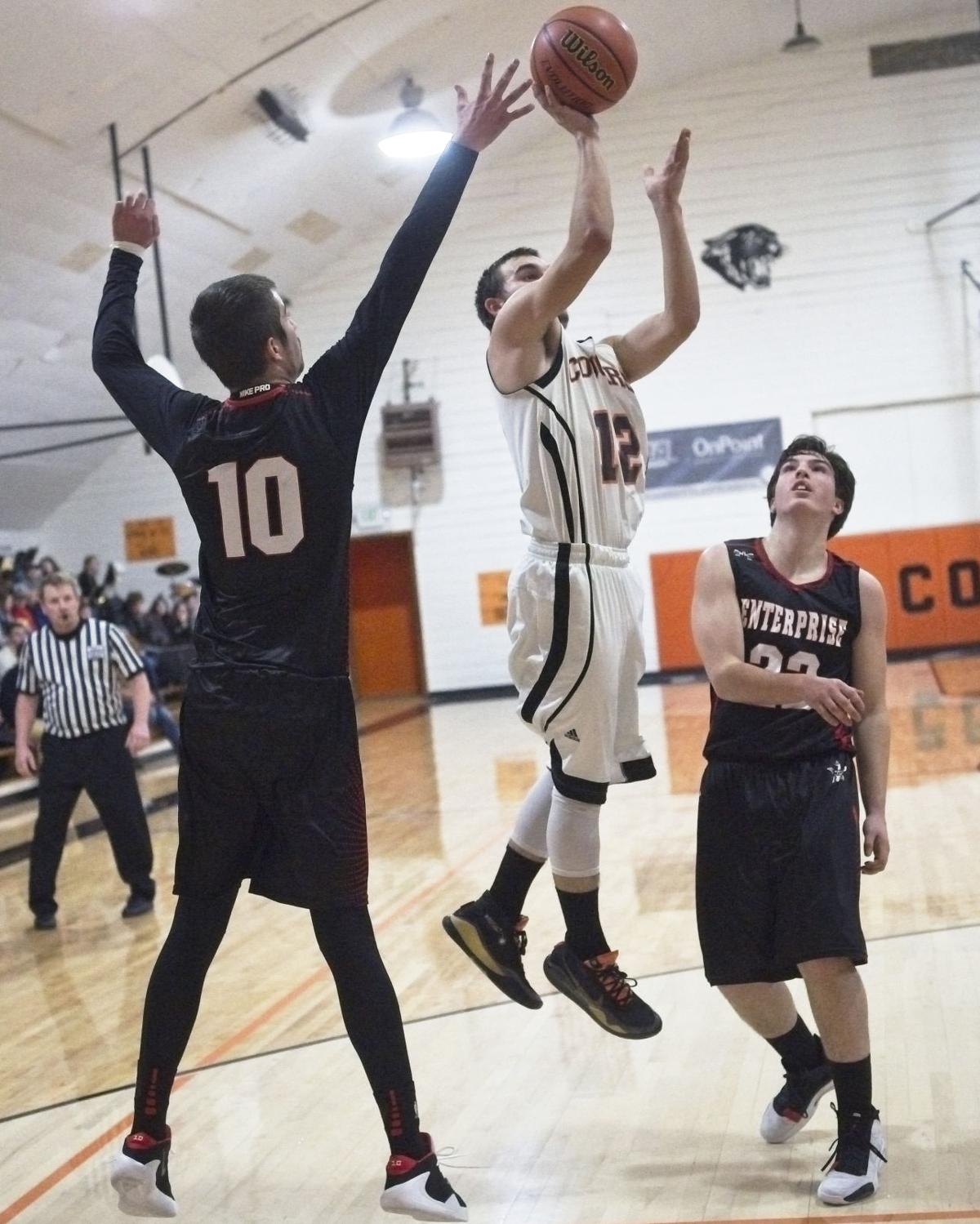 Cougar Tristin Bales unleashes a jumper in the second quarter to keep the Cougars within stalking range of the Outlaws. 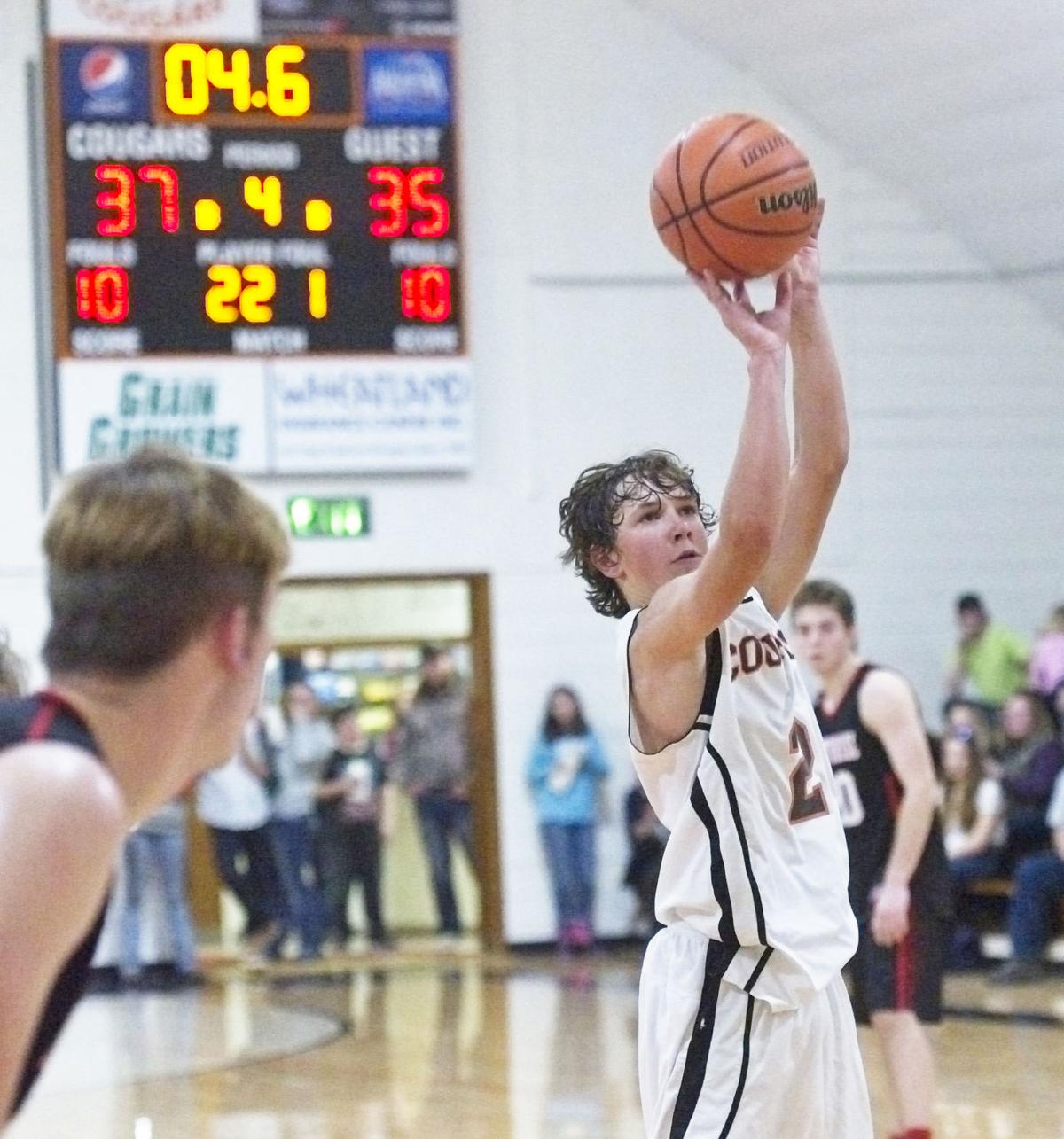 A Cougar player fouls Outlaw Devin Greer in the act of shooting in the final minutes of the intense fourth quarter. Greer sank his free throws adding a little temporary breathing space for the Outlaws.

Cougar Tristin Bales unleashes a jumper in the second quarter to keep the Cougars within stalking range of the Outlaws.

It had all the marks of a thriller: Two county varsity basketball teams with two new coaches meeting for a season opener. It was a thriller. The Wallowa Cougars eked out a 38-35 victory in the final minute of a Wednesday, Dec. 4 battle.

Due to graduation, both squads lost significant and key players and are essentially rebuilding their teams. New coaches added yet another unpredictable element to the mix, so the battle piqued much local interest. Neither team failed to deliver on the excitement element.

The first quarter saw the Outlaws on top, 8-3, with halftime showing a similar point spread. The third quarter started with the Outlaws nursing a five-point lead, 28-23. The Cougs scored 15 in the final quarter while they held the Outlaws to just seven.

In the fourth quarter, Cougars player Kolby Mandal, who’d been struggling, hit two three-pointers and senior Quinten Tillery, high scorer with 10 points, notched three points after completing a shot accompanied by a foul, which put the Cougs up by one point.

The Outlaws tied the game at 35 each before Zeb Hermens hit three of four free throws down the stretch including burying two with less than 5 seconds left that sealed the deal for the Cougs.

“It was a really hard-fought game,” Coach Lathrop said. “It was fun to watch the kids jell. We’ve got a lot to work on, but we worked hard.”

Lathrop was particularly pleased with the defense, something he emphasized to the team in the preseason.

“We created more than 25 turnovers,” Lathrop said. “We kept our turnovers down to about 11, which in that game was pretty good.” He also lauded the performances of Zeb Hermens and Tristin Bales who guarded talented players nearly a foot taller than themselves and held those players to a combined 13 points.

Not everything was rosy. The coach said the team missed a number of shots, particularly from outside the paint. He also credited the Outlaws’ defense in the shooting percentages and noted their opponents had a lot of talent.

“We’ve got some talented kids here ourselves,” Lathrop said. “Our whole idea was to outwork them and I think we did.”

Coach Kyle Crawford was philosophical about the Outlaws’ loss. He said it was easy to tell it was the first game of the year for both squads, particularly with shooting.

“It was physical and fast-paced,” he said. “It was pretty exciting to watch.” He added that neither team was firmly in control until the very end of the game.

Crawford said the game was a humbling experience for himself and the squad. On the other hand, he said it was a great way to learn what to work on. He said the Outlaws played with energy the entire time even when the Outlaws lost the lead.

“They never played like they couldn’t come back from it,” Crawford said.

David Salim and Devin Greer led the Outlaws’ scoring with eight points each.