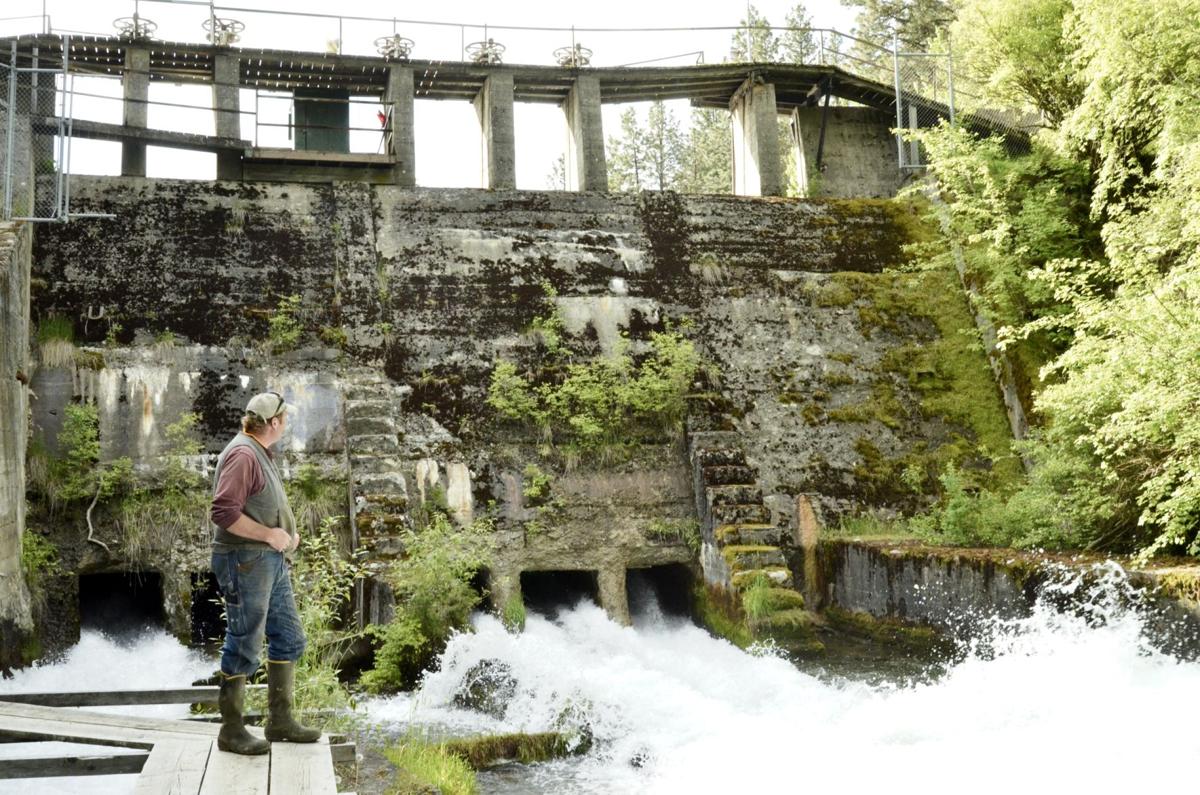 Blane Hayes, caretaker of the Wallowa Lake Dam for the Wallowa Lake Irrigation District, looks up at the dam Friday, June 12, as water from the lake flows through at about 400 cubic feet per second. 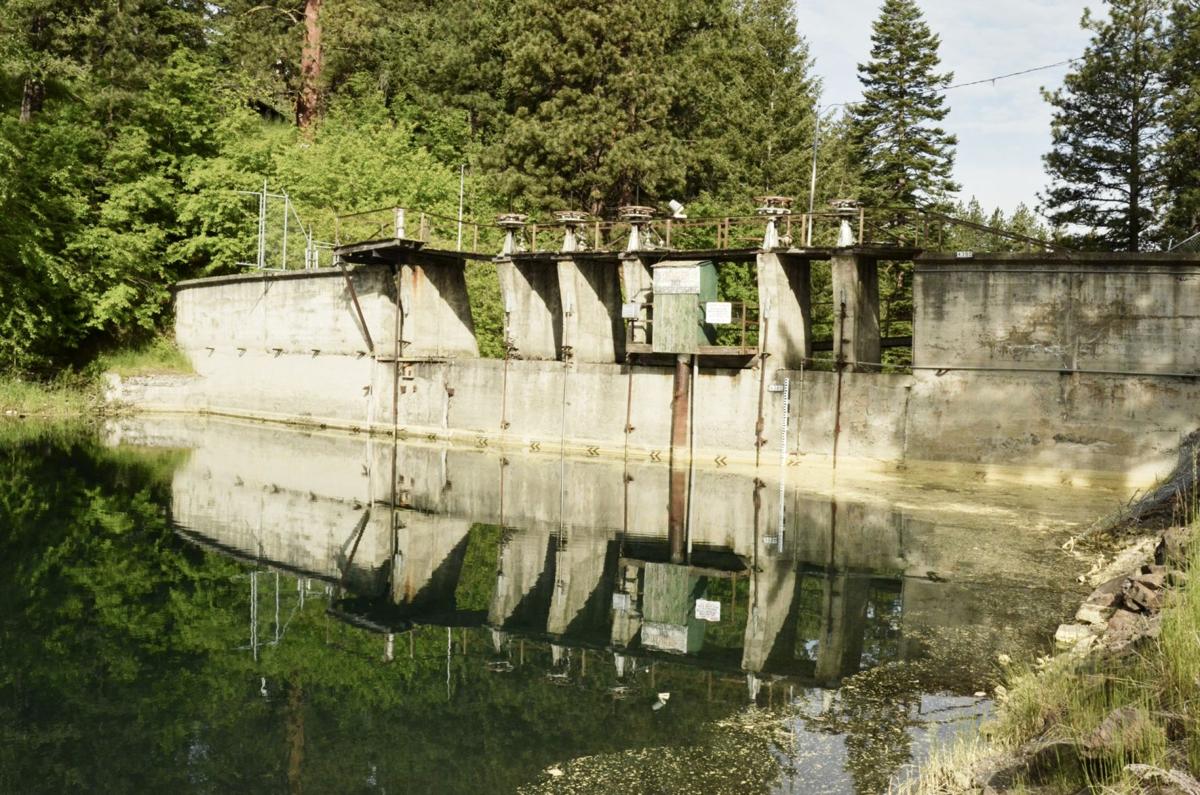 The placid water on the upstream side of the Wallowa Lake Dam is a stark contrast to the wild flow of about 400 cubic feet per second early Friday, June 12. The dam is slated for a $16 million refurbishing next year that will include some form of fish passage. 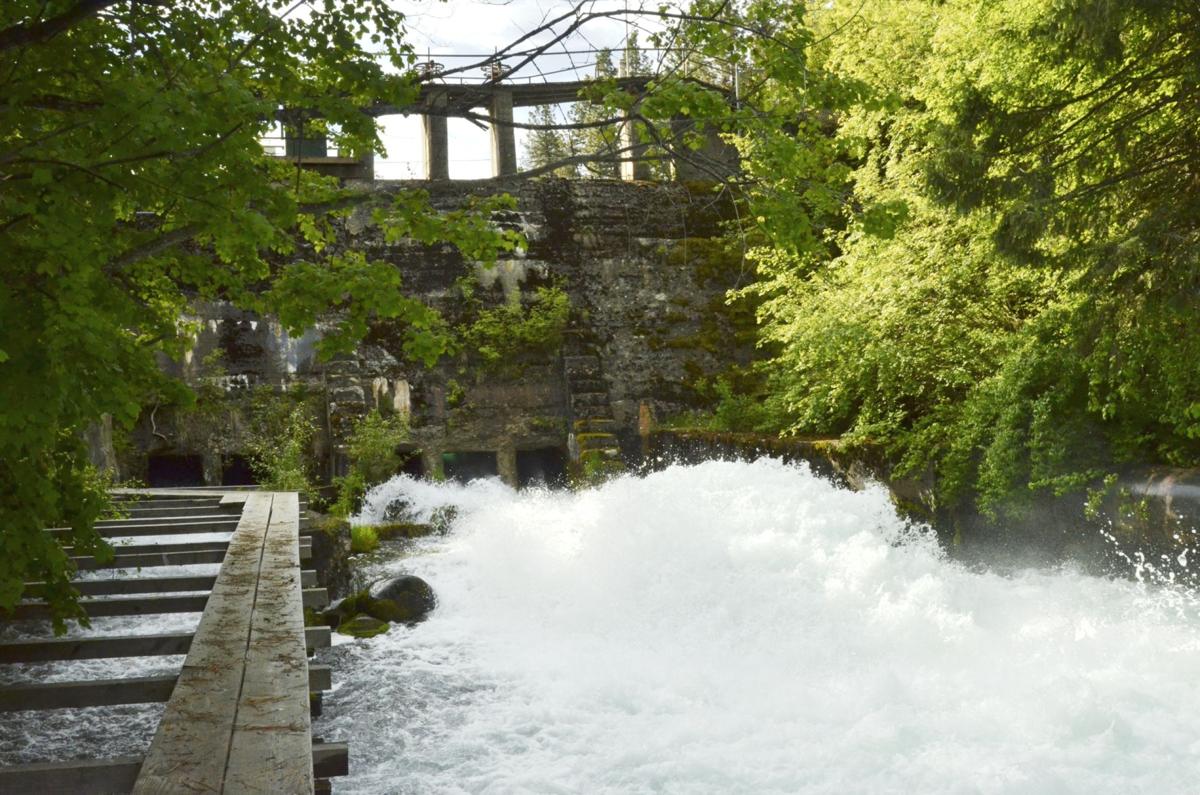 Water from Wallowa Lake flows through the Wallowa Lake Dam at about 400 cubic feet per second early Friday, June 12. The dam is slated for a $16 million refurbishing next year that will include some form of fish passage.

Blane Hayes, caretaker of the Wallowa Lake Dam for the Wallowa Lake Irrigation District, looks up at the dam Friday, June 12, as water from the lake flows through at about 400 cubic feet per second.

The placid water on the upstream side of the Wallowa Lake Dam is a stark contrast to the wild flow of about 400 cubic feet per second early Friday, June 12. The dam is slated for a $16 million refurbishing next year that will include some form of fish passage.

Water from Wallowa Lake flows through the Wallowa Lake Dam at about 400 cubic feet per second early Friday, June 12. The dam is slated for a $16 million refurbishing next year that will include some form of fish passage.

The Wallowa Lake dam is getting closer to long-awaited repair and rejuvenation A memorandum of agreement (MOA) that will release funding to refurbish the Wallowa Lake Dam is on the brink of being signed, said Jim Harbeck, director of the Nez Perce Fisheries division in Joseph. Nez Perce Tribal Fisheries is one of four signatory groups involved. The century-old dam was completed in June 1917. The work was described as “firm as the Rock of Ages” in a Chieftain article at the time. The dam, which has no fish passage, also exterminated the run of thousands of sockeye salmon that spawned in the lake each year.

In1996 Wallowa Lake Dam was listed as a high-hazard structure by the Oregon Water Resources Department’s Dam Safety division. Measures were taken to implement immediate structural improvements to stabilize the dam, and the reservoir has been held below full pool elevation to maintain safety levels. More permanent repair and refurbishment of the dam has been a long-time goal.

On Monday, June 15, Harbeck met by phone with representatives of the other involved organizations — the Wallowa Lake Irrigation District, the Oregon Department of Fish and Wildlife and the Confederated Tribes of the Umatilla Indian Reservation (CTUIR). They discussed the MOA and agreed on most points.

“We are extremely, extremely close to coming to agreement,” Harbeck said after Monday’s meeting. “On the vast majority of the MOA, there’s agreement across the board. I’m hoping that within a week’s time there will be a document ready to be signed.”

The MOA is critical because last year, the Oregon Legislature passed and Gov. Kate Brown signed a bill that included a $14 million appropriation for the dam — contingent on the signing of the MOA. Another $2 million is still being sought from other sources, Harbeck said.

The $16 million project provide the dam with a facelift and extensive refurbishment, said Dan Butterfield, irrigation district president. Mort McMillen, project manager for design and execution of the project, works for McMillen Jacobs Associates of Boise, Idaho. He is a Wallowa County native who grew up on a ranch near the Silver Lake Ditch. McMillen said plans are not to completely replace the century-old dam. He said the plan is to modify the existing structure by improving the spillway, adding fish passage, adding more concrete for weight, replacing the five conduit gates with new gates and upgrading the electrical and instrumentation.

In addition to restoring the dam itself, Butterfield said fish passage is a must. The current dam has no fish passage at all.

But that won’t necessarily mean a fish ladder. Freezing water in the winter can create long-term structural problems for a concrete fish ladder, Harbeck noted.

“As the four Wallowa Lake Dam stakeholders conclude the MOA process, our attention will turn to the fish passage issue,” Harbeck said. “Last year at the beginning of the MOA deliberations, it was decided to “table” the important but separate fish passage issue until we have a signed agreement specific to the dam. The type of fish passage will be a matter of discussion at that point. During the MOA deliberations, the Nez Perce Tribe has been actively searching for supplemental funds to support fish passage – whatever that may eventually be. The Tribe has been to Washington DC, met locally with Senator Merkley regarding fish passage and worked with Merkley and Wyden’s staffers in preparing federal proposals. We currently have several other fish passage funding proposals in the que now that potentially could help support the dam rehabilitation project in terms of money.”

Harbeck and Jeff Yanke, a watershed manager with ODFW, said that the return of sockeye salmon is an important goal of the dam’s refurbishment. Once a principal food and economic source for the Nez Perce, sockeye also play an important spiritual role in tribal life. Prior to construction of the dam, tens of thousands of sockeye returned to Wallowa Lake each year to spawn in the gravels at the Wallowa River’s inlet on the south end of the lake. The kokanee in the lake today are land-locked sockeye, although most are descendants of fish stocked from lakes in Washington.

Bull trout, mountain whitefish and rainbow trout also have the ability to make Wallowa Lake their home — if they have access via fish passage, Yanke and Harbeck said. Steelhead and even coho salmon may enter the lake from time to time. And bull trout may come up the river seeking cold water refuges. “I’m hoping this gives bull trout the chance to seek cold water in the river above the dam,” Harbeck said. He also noted that sockeye introduced to the lake could not be listed as an endangered or threatened species.

Plans call for a release of the funds from the state in April. McMillen said the project timeline is to begin construction in August 2021. Construction is slated to go through the winter and begin refilling in April 2022, he said.

“This is a win-win. It’s a win for fish as well as people and it’s a win for farmers and irrigators,” Harbeck agreed. “It’s going to improve life here for everyone. The community has something to celebrate. ”