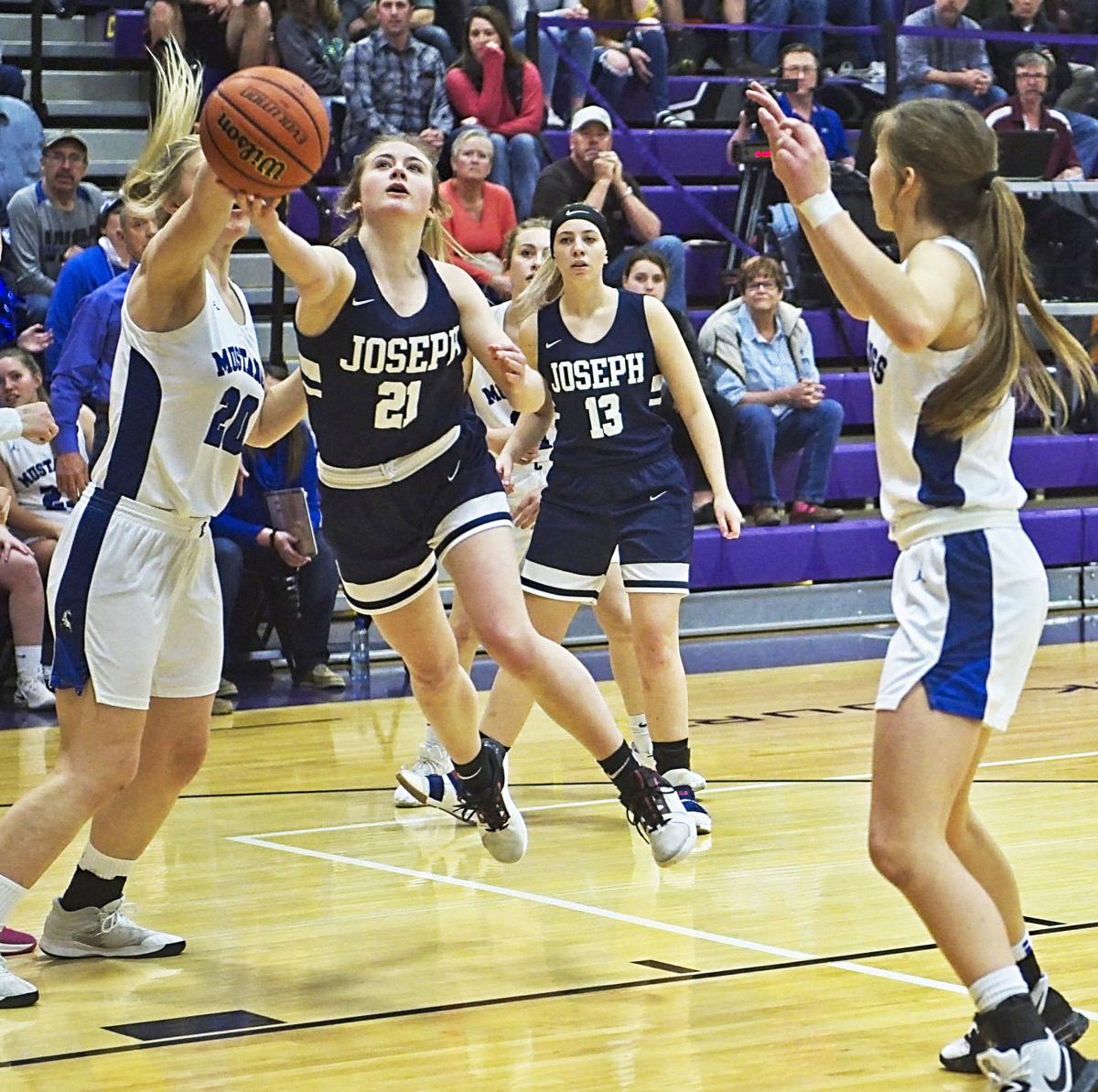 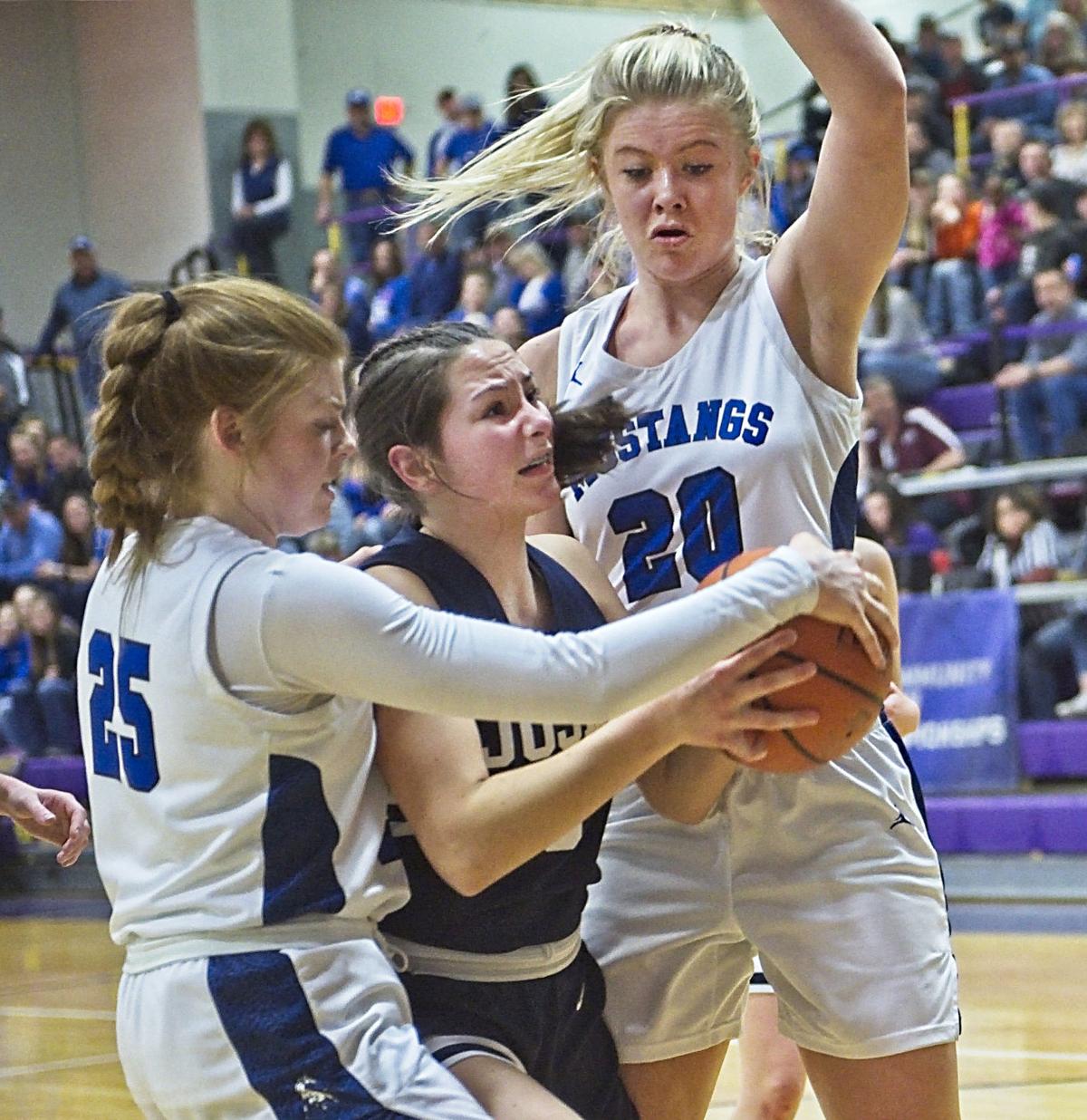 Molly Curry fights to keep posession of the ball. 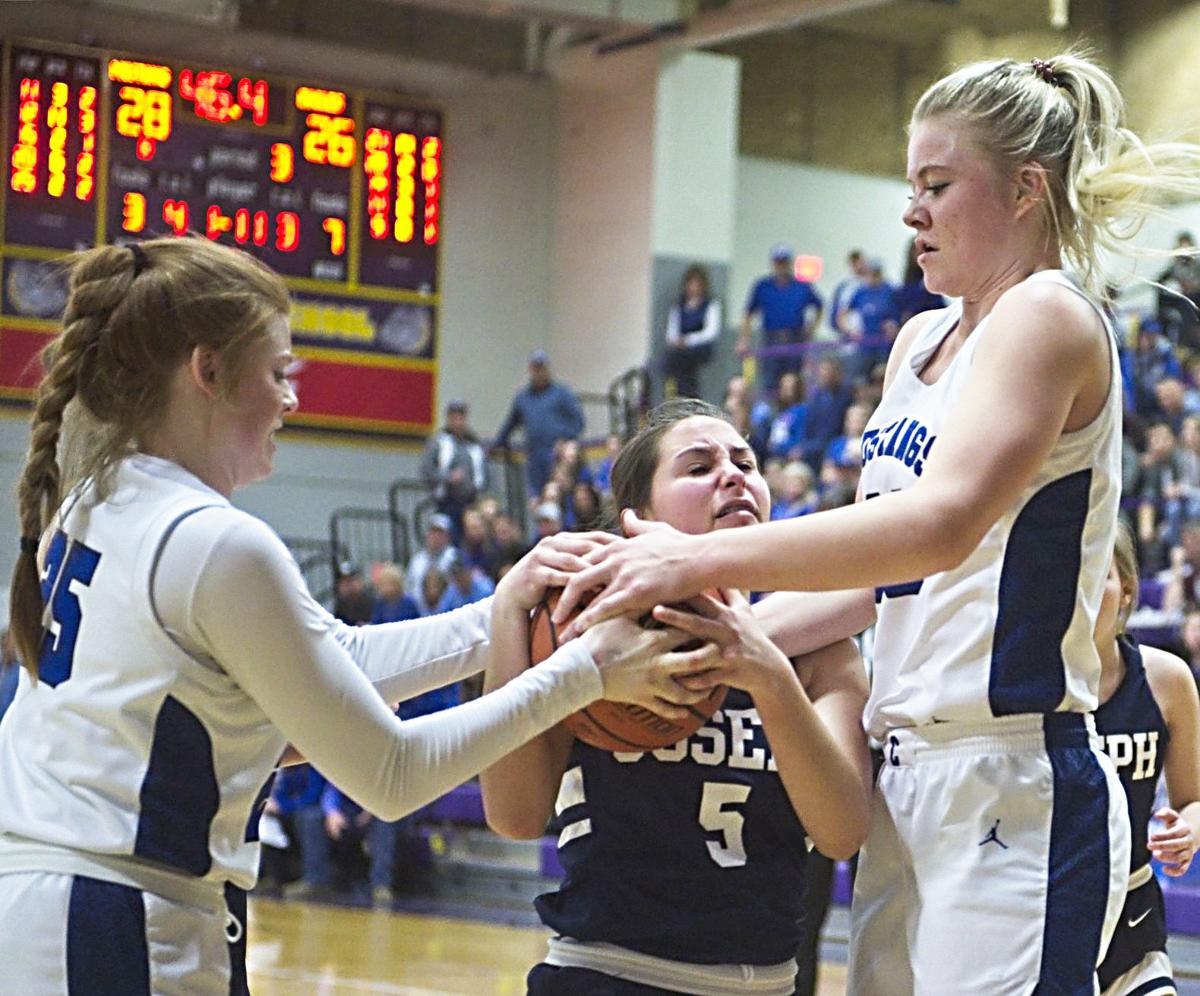 Molly Curry tries to keep posession of a rebound. 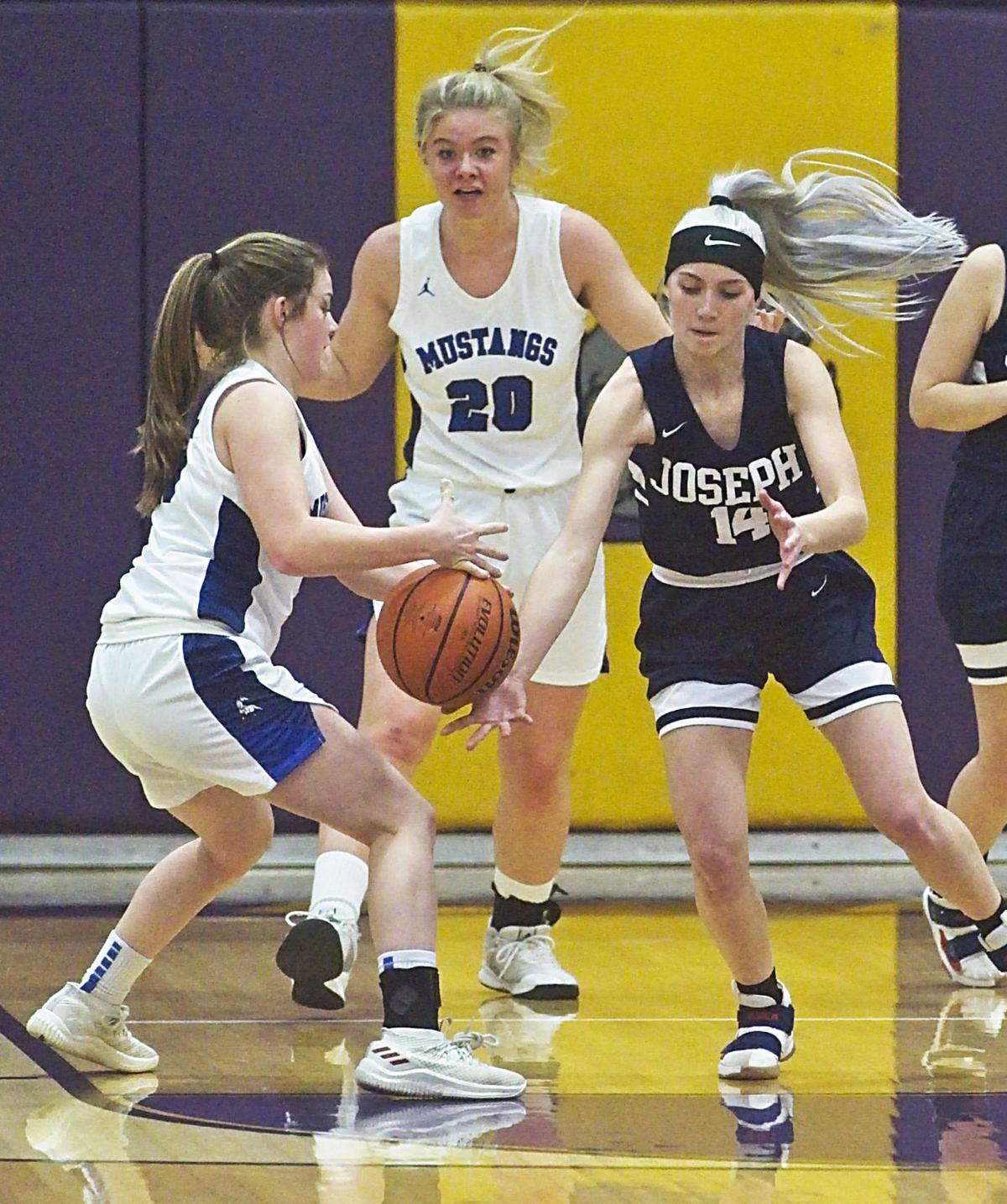 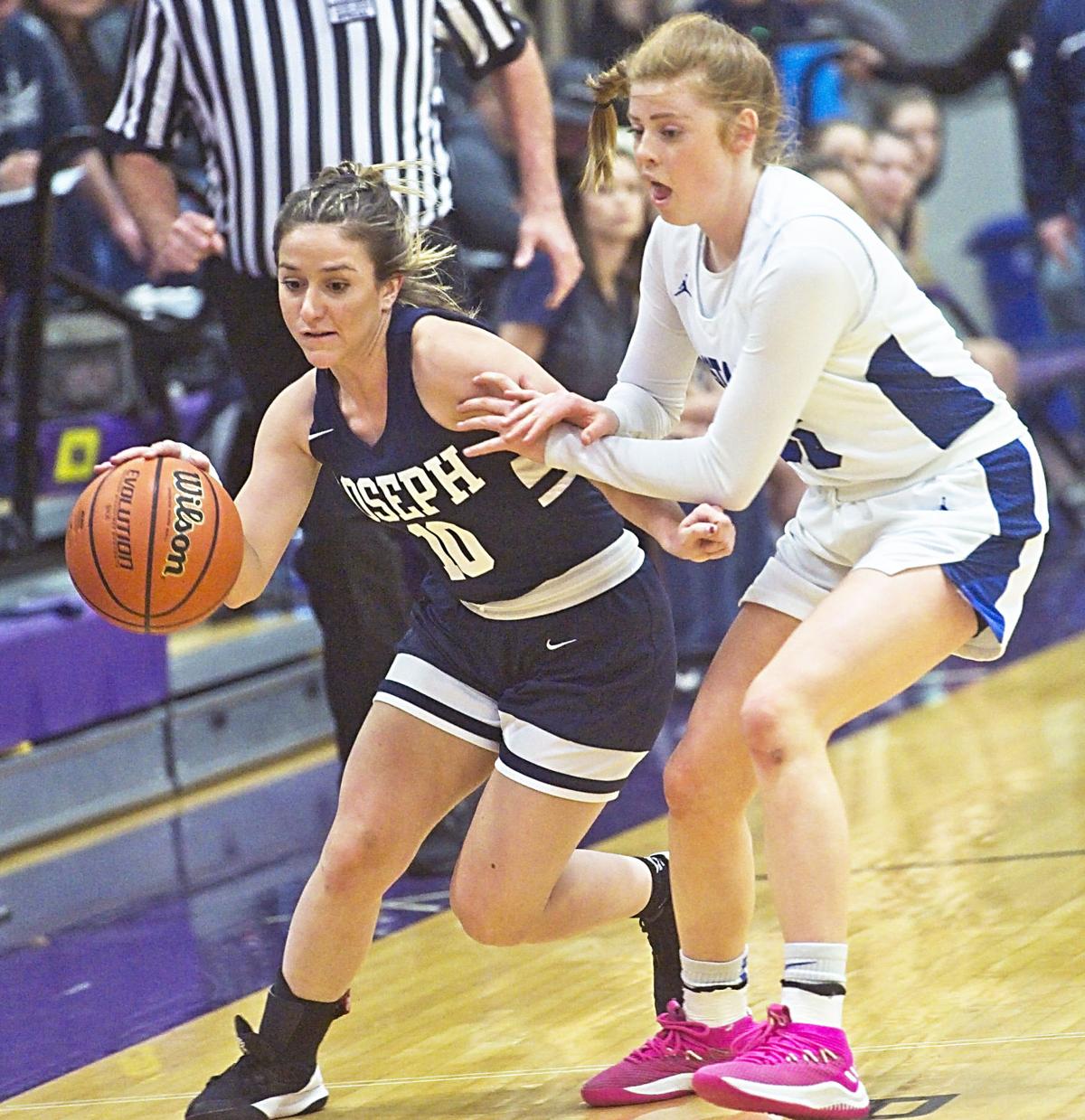 Brianna Micka drives to the basket. 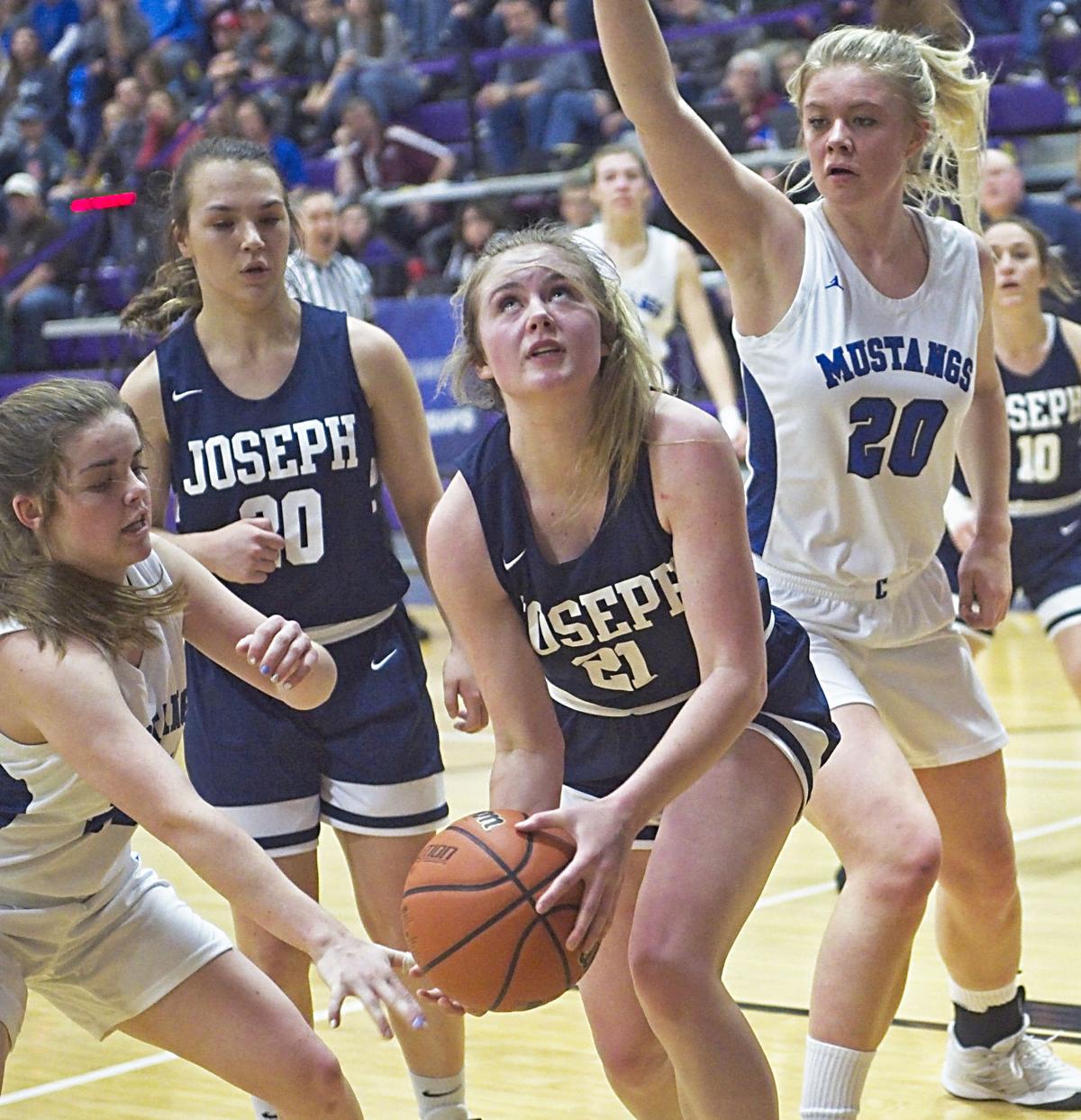 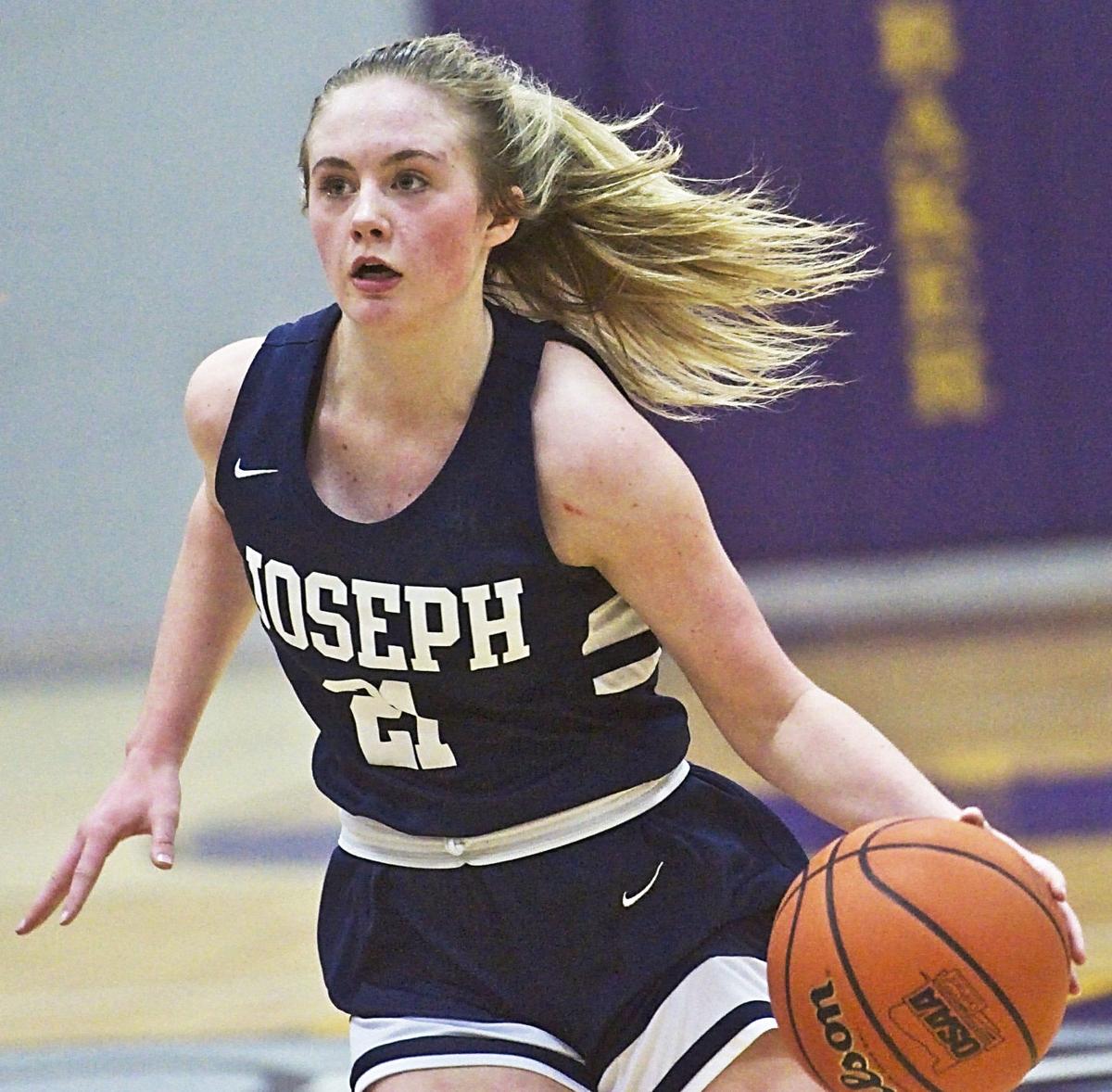 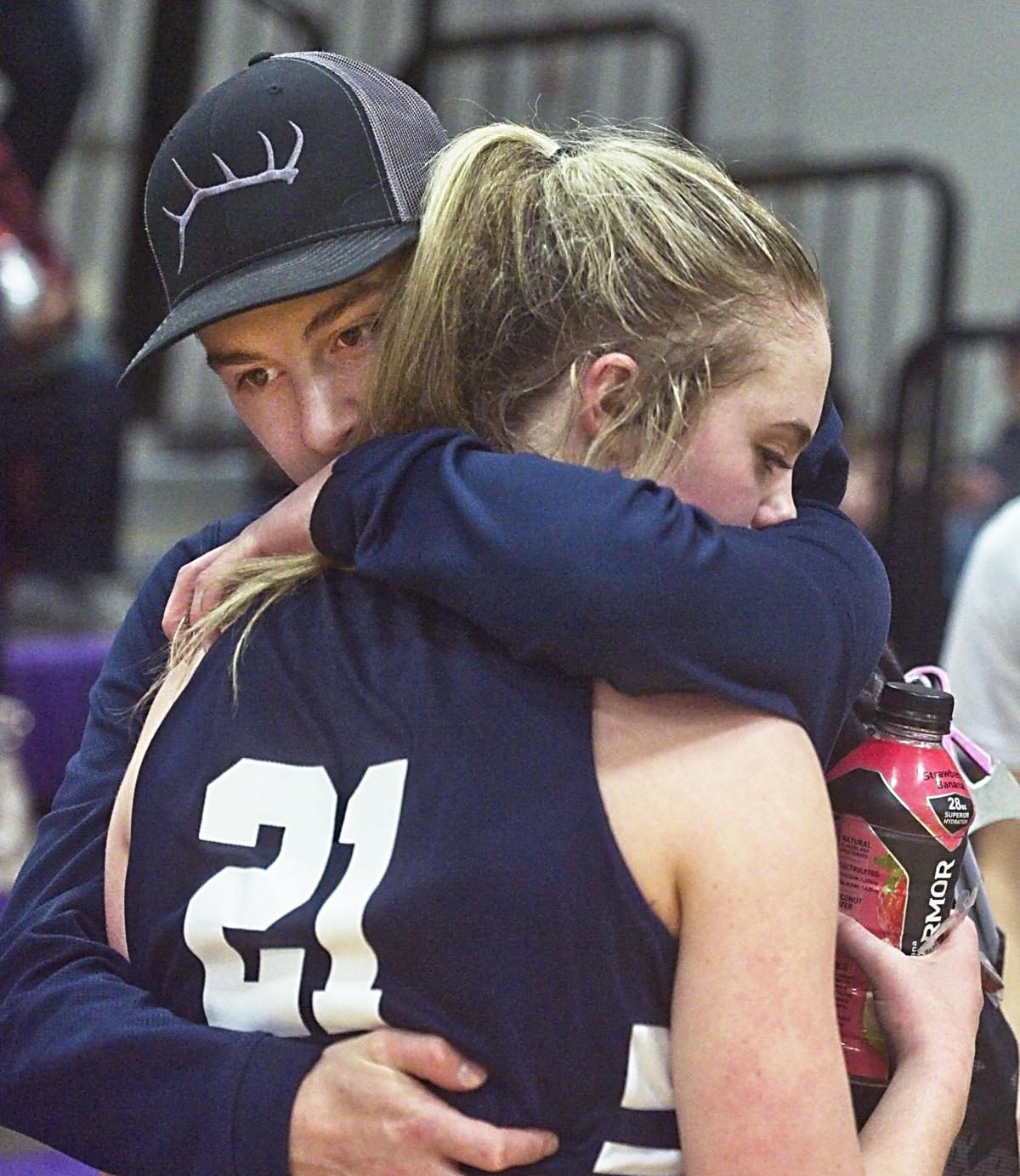 Carson Littlepage and Sabrina Albee console each other after the girls' loss. 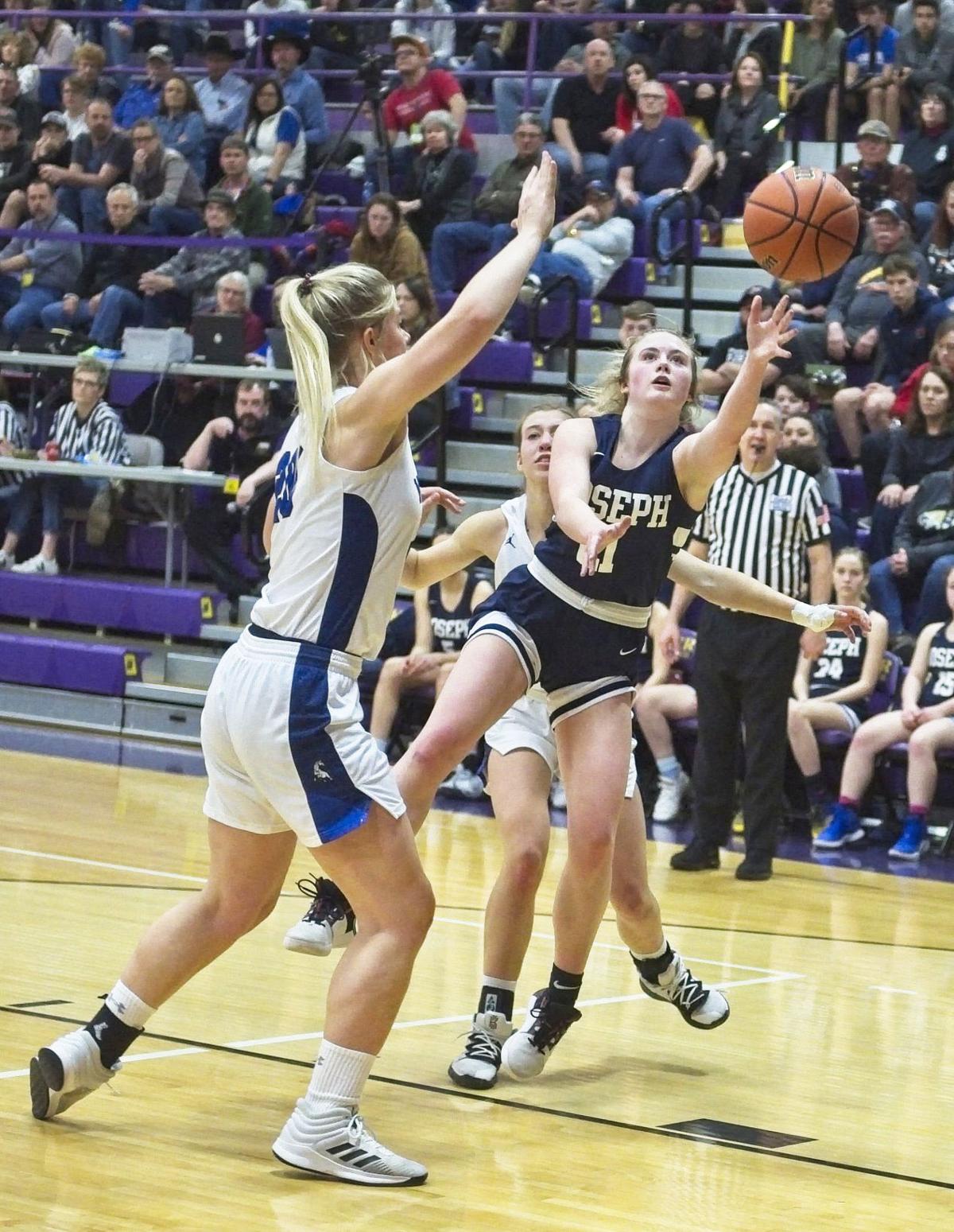 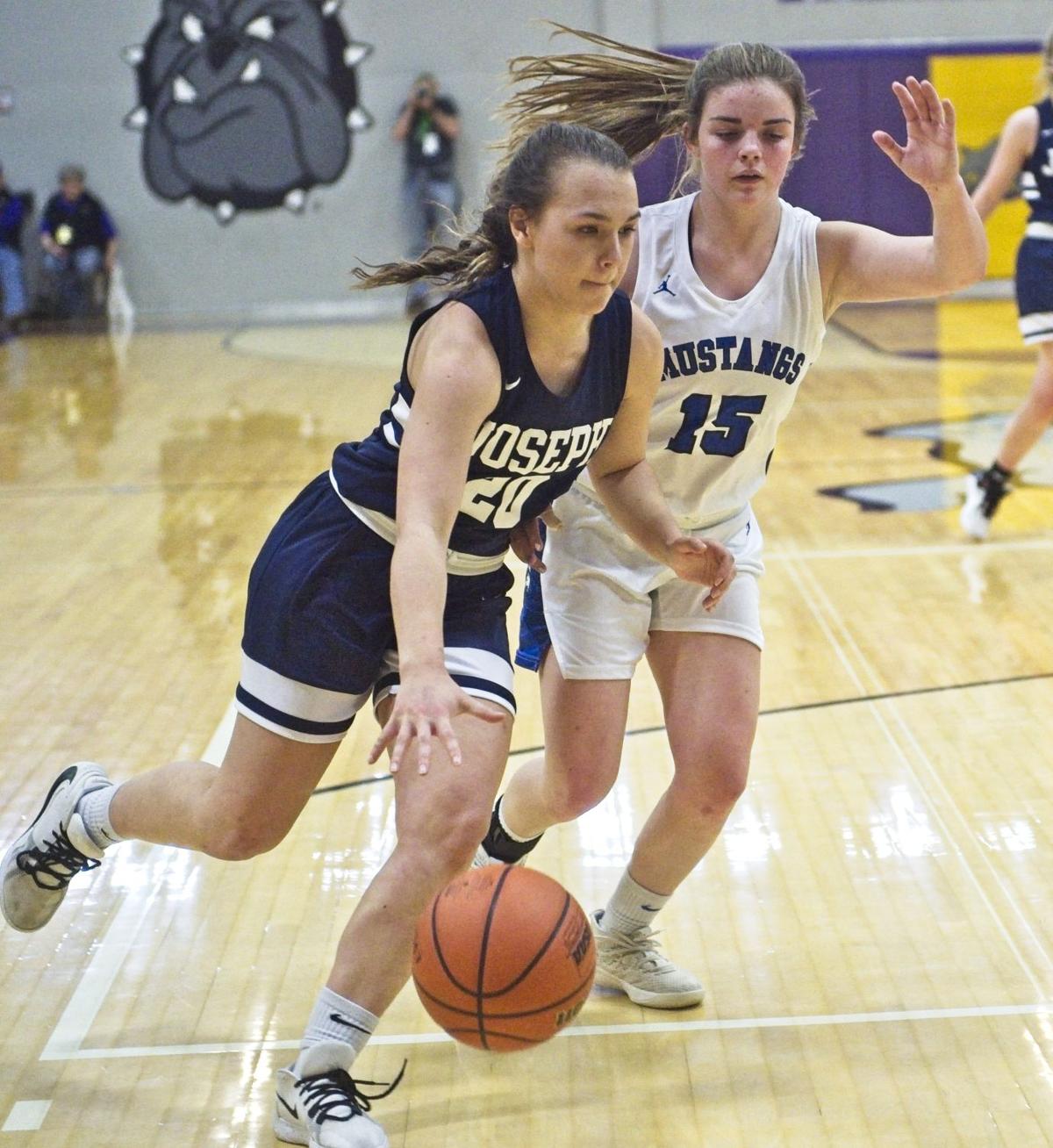 Camille Crenshaw drives to the basket. 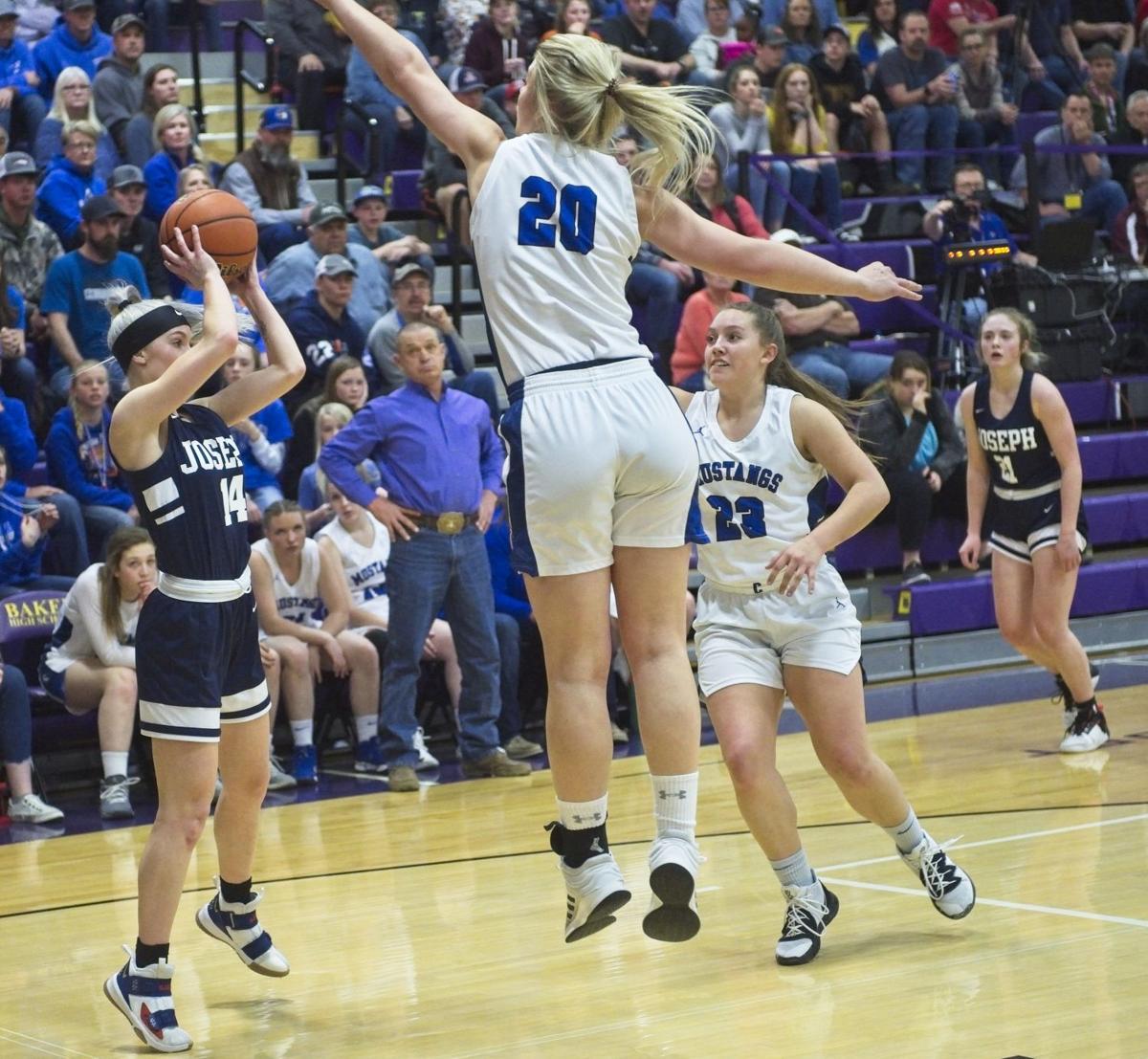 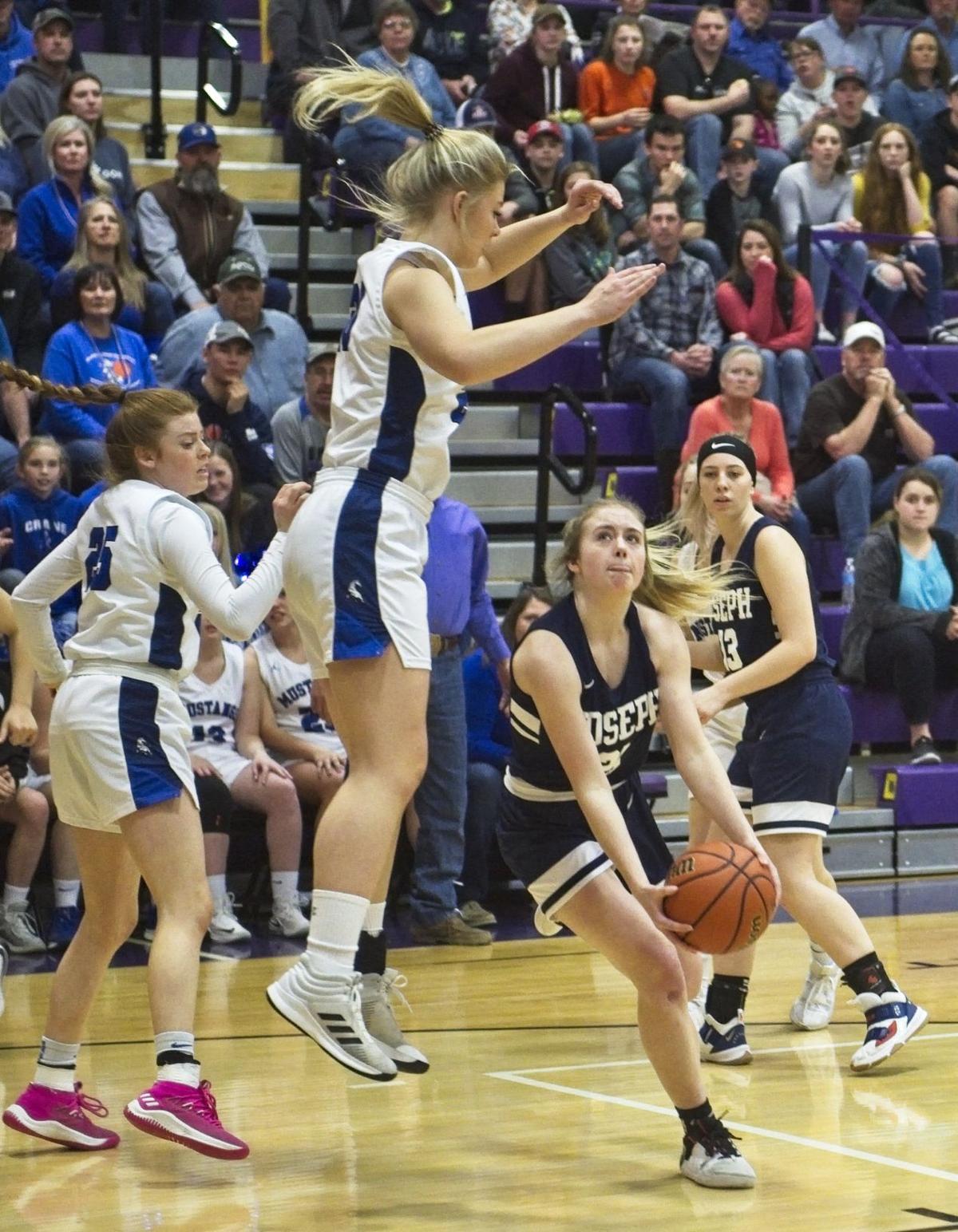 Molly Curry fights to keep posession of the ball.

Molly Curry tries to keep posession of a rebound.

Brianna Micka drives to the basket.

Carson Littlepage and Sabrina Albee console each other after the girls' loss.

Camille Crenshaw drives to the basket.

The Joseph Eagles’ girls state 1A championship hopes came to an end after a hard-fought 48-36 loss to the top-ranked Crane Mustangs on Friday, March 6, in Baker City. Joseph kept the game close during the first three quarters, but Crane pulled away at the end. It was the first time since 2009 that the Joseph girls played in the State 1A semifinals. The breathtakingly close game with the state’s #1 team capped a super season for the Eagle’s girls.

The 27-0 Mustangs came to the battle heavily favored, but the Eagles’ girls gave Crane a run for its money in the fray, nearly pulling out a victory in a game where the lead exchanged hands multiple times in the first three quarters, and remained close until the last few minutes. Sabrina Albee scored 20 points despite Crane’s vaunted defense that often included double teaming Albee, who drew first blood in the game for the Eagles.

The game opened with a Camille Crenshaw steal and a pass to Albee who fired the first shot over the bow — and into the bucket. Crane answered back, but so did the Eagles during the opening quarter which saw the Mustangs clinging to a 9-7 lead. The Eagles also forced several turnovers.

The second period saw more of the same as the two powerhouses squared off matching mostly bucket for bucket. The half ended with the Mustangs holding on for a 21-18 lead, again, turning over the ball to the Eagles six times. The Eagles also shot a very respectable 44% from the floor.

Coach Lance Homan’s halftime pep talk led to further fire on the part of the Eagles. They steamed out in the second half and quickly tied Crane at 21 after a three-pointer by Brianna Micka. An Albee jumper put the Eagles ahead by two, 32-21 with five minutes remaining. After a minor Mustang rally, an Albee shot from behind the paint tied the game at 26. The quarter ended with the Stangs up, 30-26 and the outcome of the game in doubt.

The fourth quarter saw Crane take total command of the pace of the game. The bucket seemed to disappear for the Eagles, which Crane took advantage of and built an insurmountable lead, point by point. The Eagles battled hard, but the shots wouldn’t fall and Crane’s penchant for offensive and defensive rebounds and a propensity to shoot probably spelled the difference in the final score.

Among Class 1A opponents, only Jordan Valley, in a 47-19 loss on Feb. 1, held the Mustangs to fewer points than Joseph did.

“This was a heck of a game,” Coach Lance Homan said. “Crane came into this game No. 1, not having lost a game and we came out really playing well.”

“Our biggest thing is we wanted to play hard,” Homan said. “I thought our girls played well.”

Davis didn’t score until the final 26 seconds of the first half, and she ended up with just 7 points on 3-of-13 shooting, to go along with a game-high 18 rebounds.

“You always have to focus on (Davis) inside,” Homan said. “We’re little, so we have to work together.”

Old Oregon League player of the year, Sabrina Albee, led the Eagles’ attack with 20 points. Brianna Micka contributed seven with a 3-for-3 performance from the field. No one else scored more than three points.

“Sabrina’s good,” Homan said of the two-time Old Oregon League player of the year. “We put a lot of pressure on her because she can score so quickly. She’s fun to coach. She’s a gamer.”