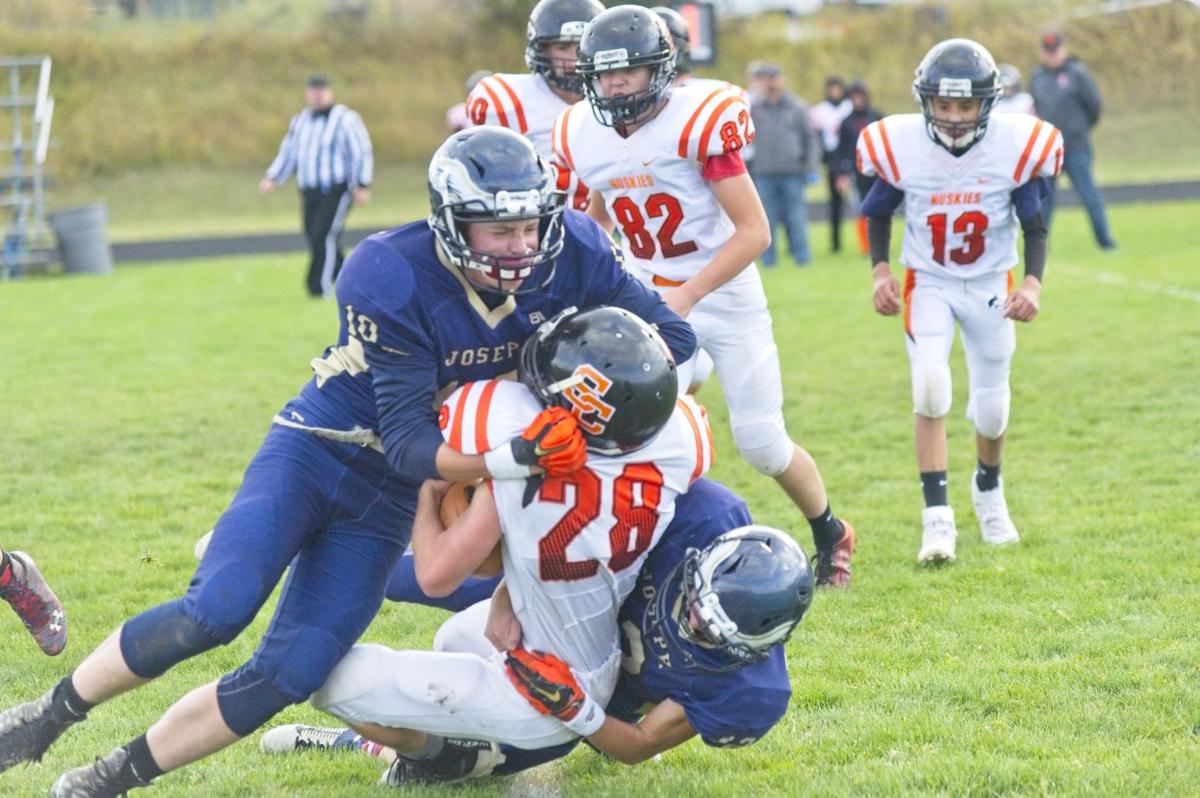 Munch and Crunch — A Sherman/Condon runner finds himself in a familiar place — sandwiched between Eagles’ defensemen during Joseph’s Saturday, Oct. 5, 61-6 win. 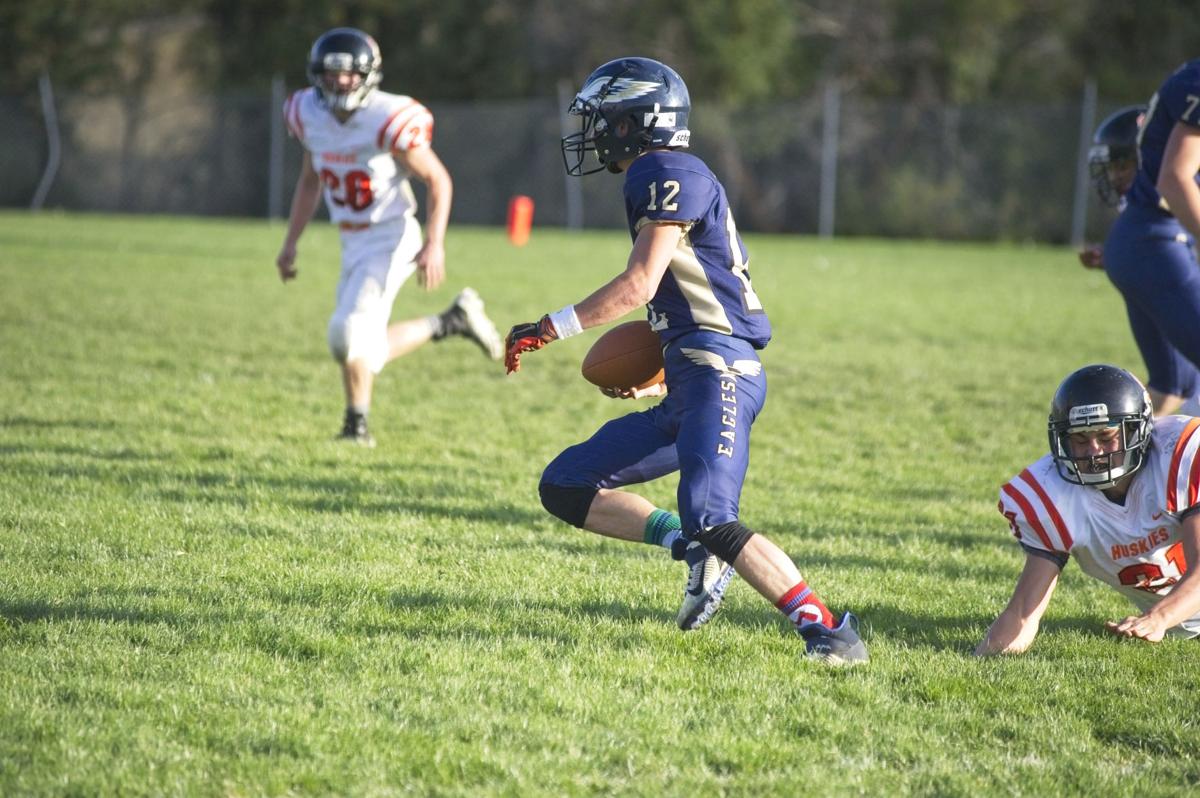 Littlepage on the move — Carson Littlepage finds lots of daylight between Sherman/Condon defenders during the Eagles’ 61-6 shellacking of their opponent. 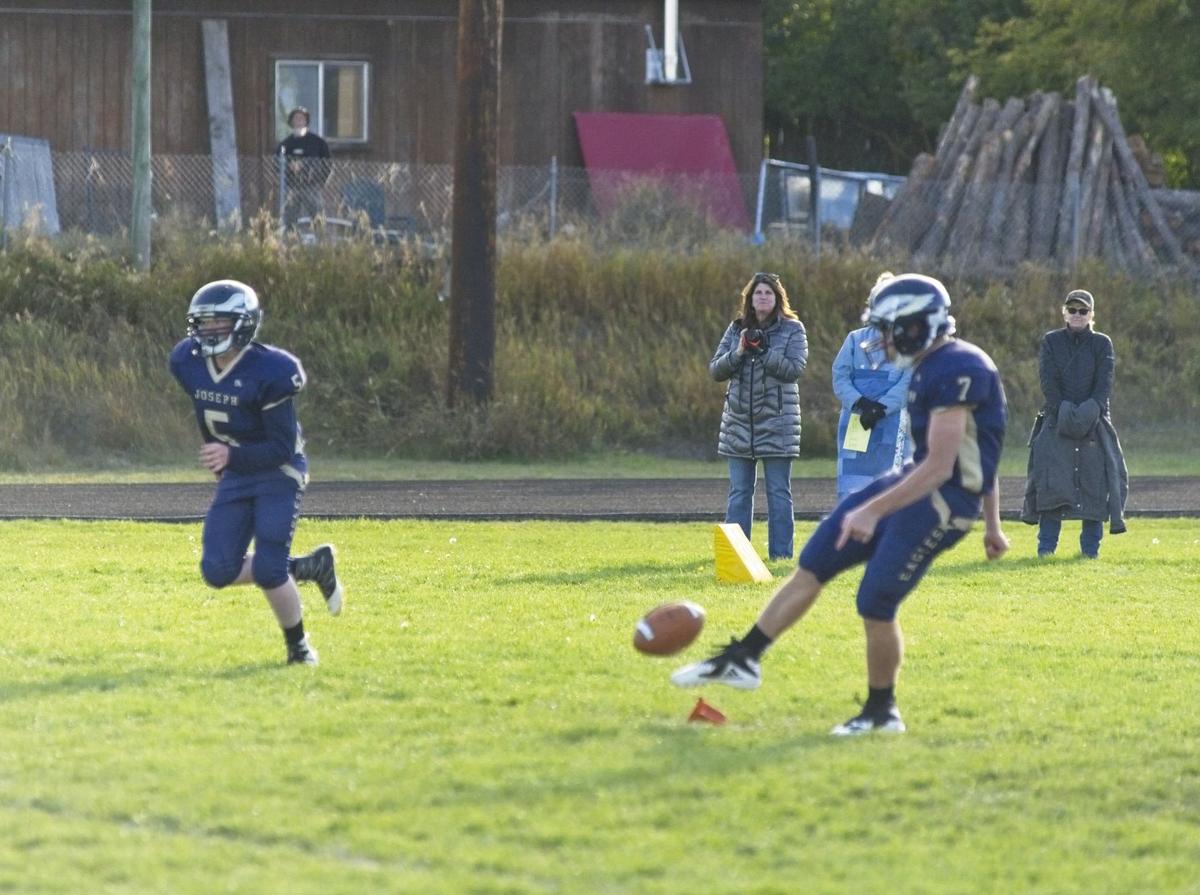 Munch and Crunch — A Sherman/Condon runner finds himself in a familiar place — sandwiched between Eagles’ defensemen during Joseph’s Saturday, Oct. 5, 61-6 win.

Littlepage on the move — Carson Littlepage finds lots of daylight between Sherman/Condon defenders during the Eagles’ 61-6 shellacking of their opponent.

The Joseph Eagles gridders continued their dominance over opponents, steamrolling Sherman/Condon by a 61-6 score. The Eagles scored on their first possession and never looked back. The score stood at 18-0 at the end of the first quarter with the squad in total command of the field.

Carson Littlepage ran like a wild man through a Condon defense that struggled to even lay a hand on him. He tallied 216 yards rushing and four touchdowns. Juston Rogers had 38 yards rushing for one touchdown.

Defensively, Juston Rogers led the squad with 11 tackles followed by Carson Littlepage with nine and Hadley Miller with five. Guylen Snyder and Hayden Hite each brought down three. Snyder and Rogers also snagged an interception each.

An unlikely star is kicker and transfer student from Italy, Federico Buoncompagni, who wowed the crowd and opponents alike with his soccer-style kicking skills, which included a point after touchdown kick as well as a number of touchbacks on kickoffs. He also ran in a PAT for good measure.

“It was a great game,” Coach Duncan Christman said. “Pretty much everyone got to play. What I love about our team is that I can take people out and put other people in their positions, and it’s like there’s no difference at all.” He also noted he thought the game would have been closer in score had their opponents not lost seven players due to a suspension for vaping.

“The team they brought was still tough and very competitive,” Christman said.

The coach also gave credit for the victory to the drive of his players.

“It’s the players and their drive to be better than last season,” he said. They’re really working hard to make this their season and not chasing the coattails of last season. They’re definitely on their way to do that.”

That’s going to be a tough game,” Christman said. “It’ll be the best game we have all season.”

Sorry, there are no recent results for popular articles.

Sorry, there are no recent results for popular images.