PENDLETON — As fires rage across Western Oregon, displacing more than half a million people, Eastern Oregon fire managers are hesitant to send crews.

According to Umatilla National Forest Public Affairs Officer Darcy Weseman, the forest sent about 20 employees to the west side of the state to support incident management teams as single resources or to serve in overhead team roles. She said that includes Umatilla Supervisor Eric Watrud, who is on the Willamette National Forest serving as an agency administrator.

Meanwhile, hand crews and engines are being held back.

“With the extreme fire danger on the forest, combined with our reduced numbers of firefighters due to seasonal employees returning to school, we haven’t been able to send crews or engines,” Weseman said. 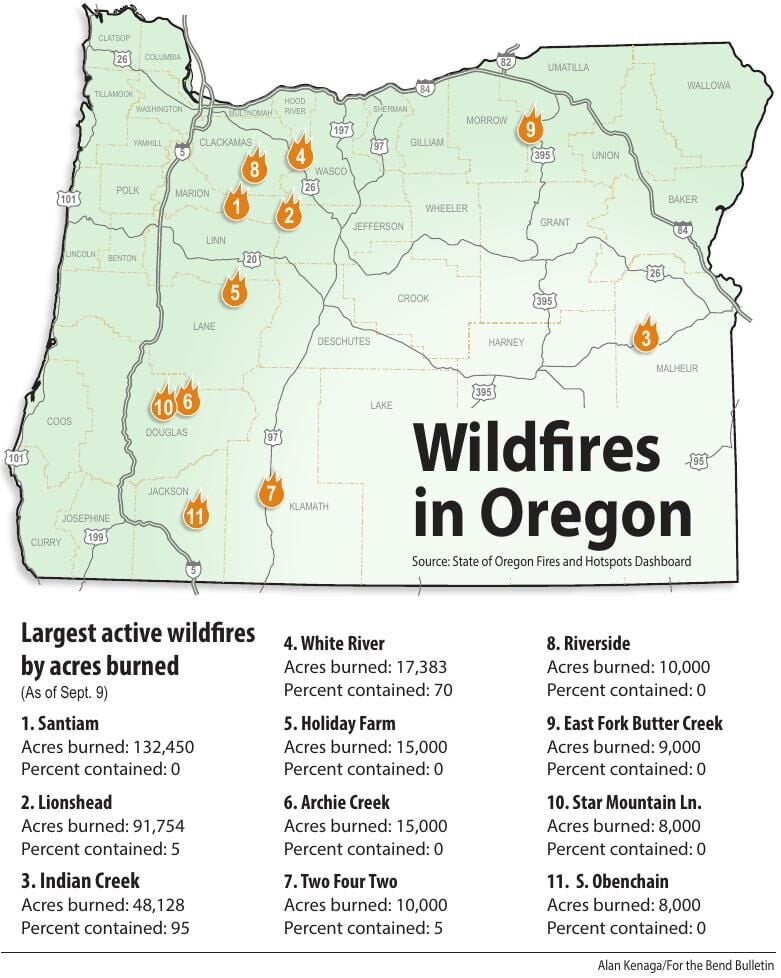 Brian Goff, integrated vegetation management staff officer for the Umatilla National Forest, is the incident commander for Northwest Team 9 that assumed command of the Archie Creek Fire east of Roseburg on Wednesday, Sept. 9. As of Friday, Sept. 11, the fire had burned 107,492 acres. According to the fire’s website, the team is coordinating suppression efforts with the Umpqua National Forest and local emergency response agencies.

Travis Mason-Busman, assistant public affairs officer for the Wallowa-Whitman National Forest, said he is currently working on the Sequoia Complex in California. He said both Wallowa-Whitman interagency hotshot crews, Union and La Grande, are fighting the Lionshead Fire on the Warm Springs Indian Reservation.

Noel Livingston, a fire staff officer for the Wallowa-Whitman, is the incident commander of the Pacific Northwest Interagency Incident Management Team that assumed command of the Lionshead Fire on Sept. 8 — a fire that has consumed 128,455 acres. The forest’s north zone Fire Management Officer Nathan Goodrich also is assigned to Lionshead.

Goodrich said a few fire managers were sent from the forest to serve in overhead roles or as single resources as well as a 10-person hand crew. He said many firefighters have been kept at home due to local extreme fire danger.

The Wallowa-Whitman moved to Phase C restrictions Saturday, Sept. 12, prohibiting all campfires on the forest. No internal combustion engine operation is allowed except for motorized vehicles. Electrical generators are allowed under certain conditions. No off-road/off-trail vehicle travel or travel on roads not cleared of standing grass or other flammable material is allowed.

Oregon’s congressional delegation announced Friday, Sept. 11, that the White House approved Oregon’s request for an emergency declaration in response to unprecedented and dangerous wildfires that are blanketing the state. A press release from Sen. Jeff Merkley, D-Ore., said the senators and representatives pushed for the declaration to be granted, immediately following Gov. Kate Brown’s request.

The federal declaration will help provide immediate assistance across Oregon from the Federal Emergency Management Agency.

“Families across Oregon are facing horrific and potentially life-changing circumstances as these fires sweep through our state,” Merkley said. “As this emergency continues, it’s critical that the federal government do everything in its power to help.”