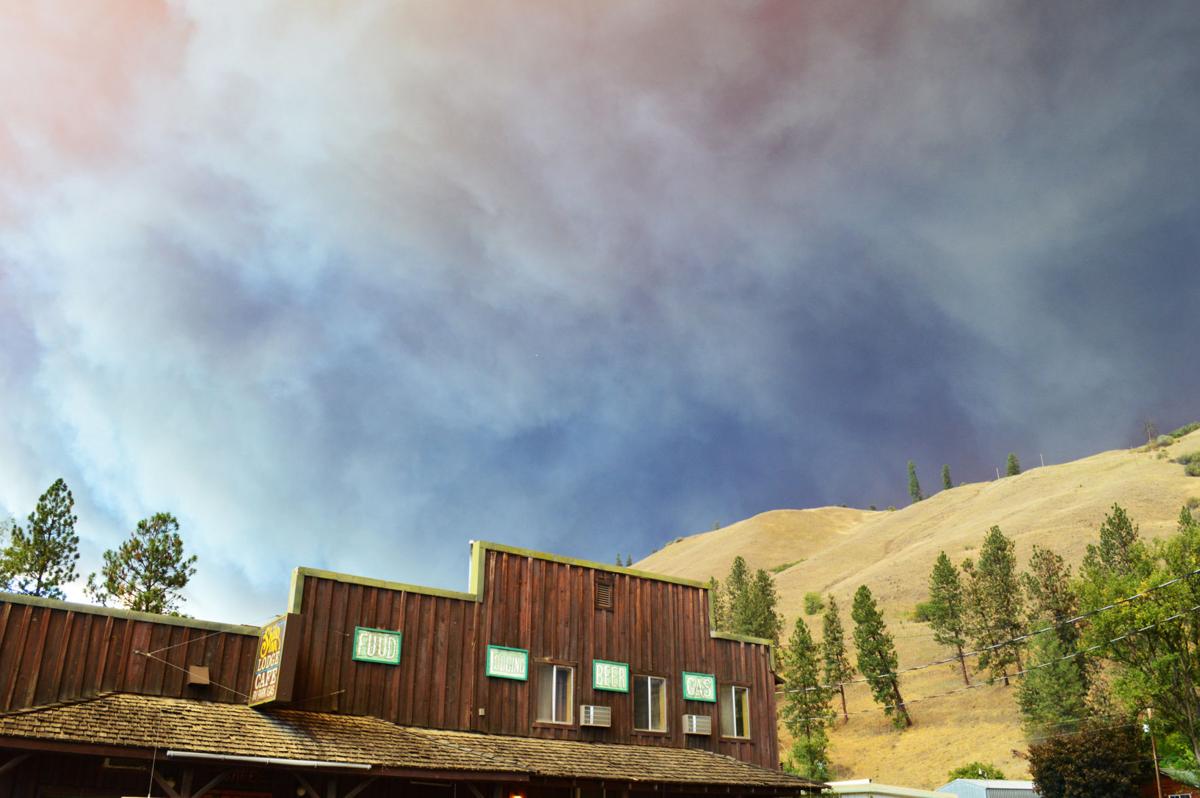 Steve Tool/ChieftainBy 3 p.m. on Aug. 20, the Grizzly Bear Complex had started its assault on Bartlett Bench above the Shiloh Inn Cafe. 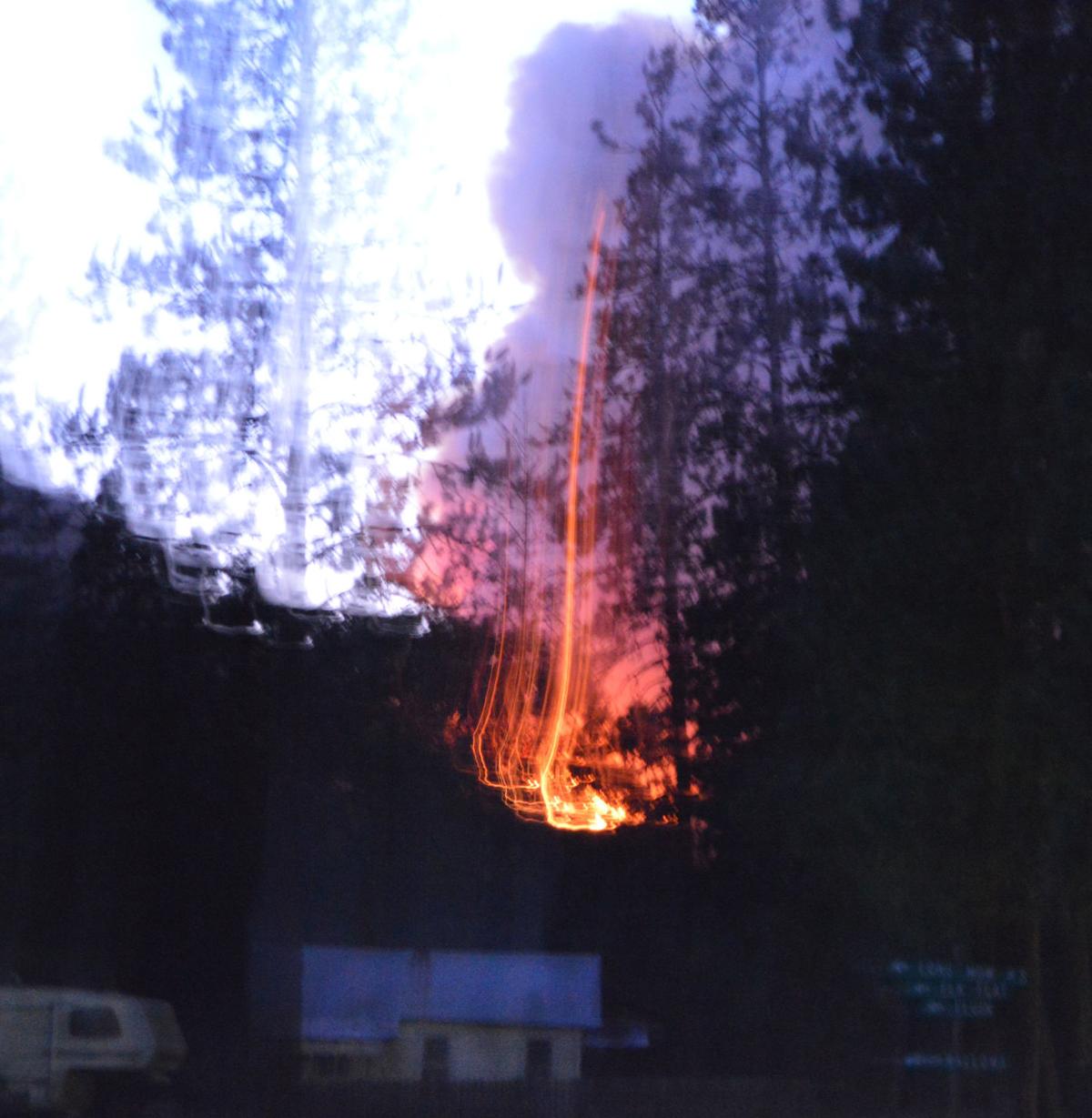 Steve Tool/ChieftainFire visible up the Wenaha Canyon behind the Troy Store on Thursday night, Aug. 20. 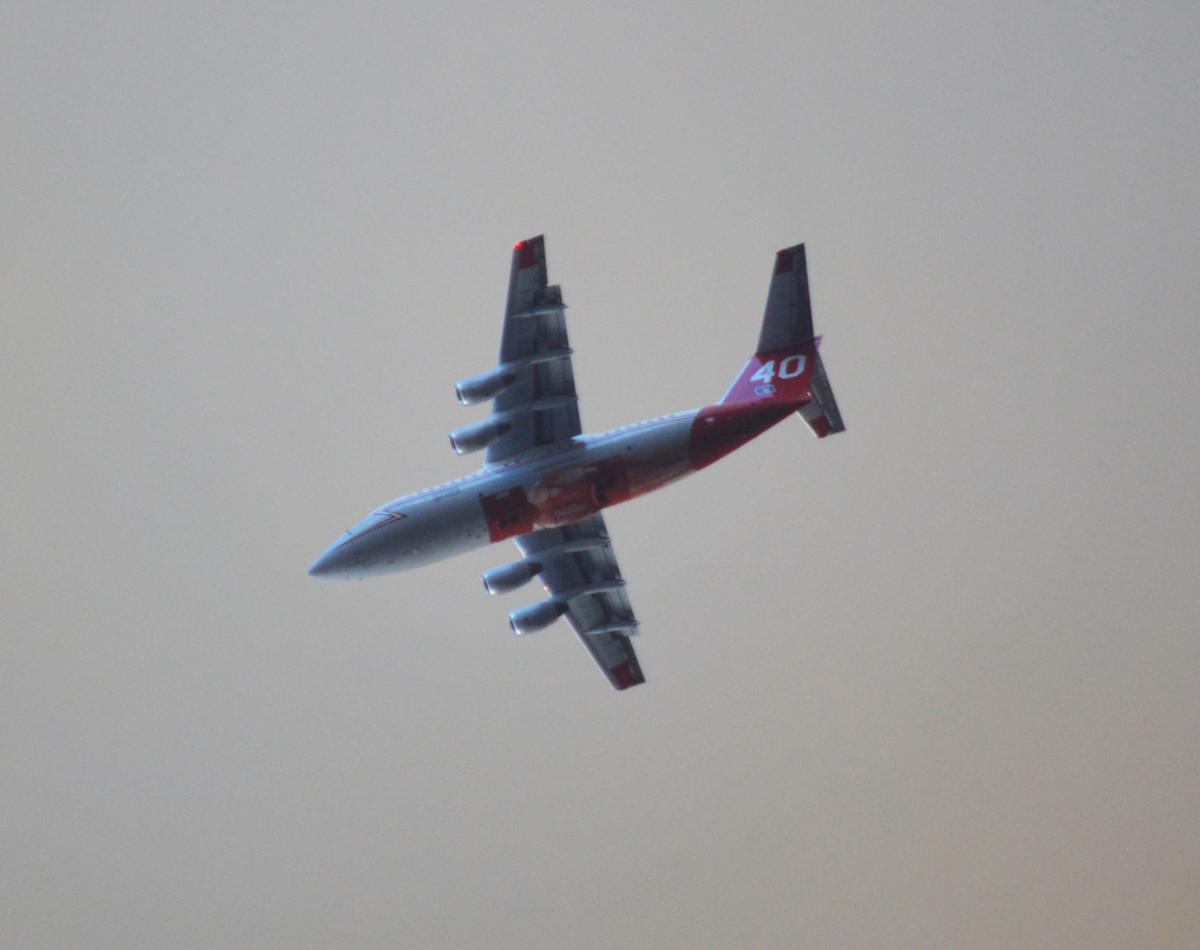 Steve Tool/ChieftainA jet flies into the smoke to dump just one of a number of loads of fire retardent on the fire just north of Troy on the evening of Aug. 20. 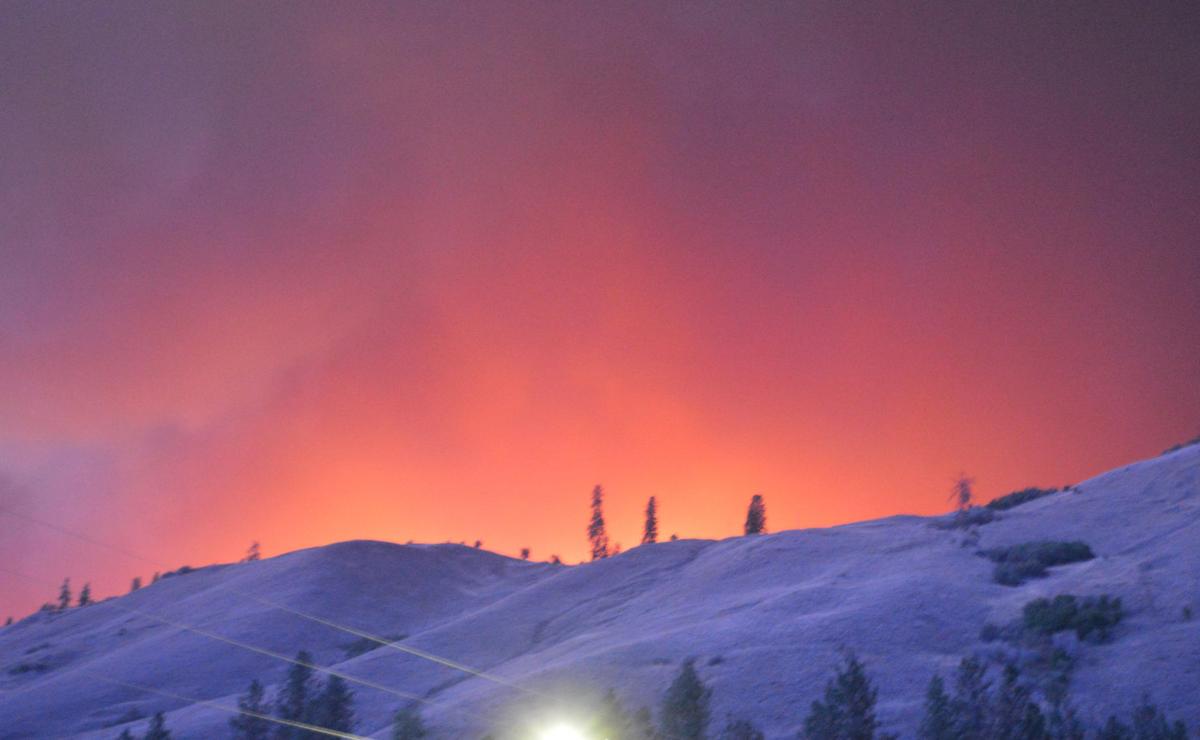 Steve Tool/Chieftain “As eveining descended, the skies too on an ominous orange hue.” Taken from the Shiloh Cafe parking lot about 7:30 p.m. 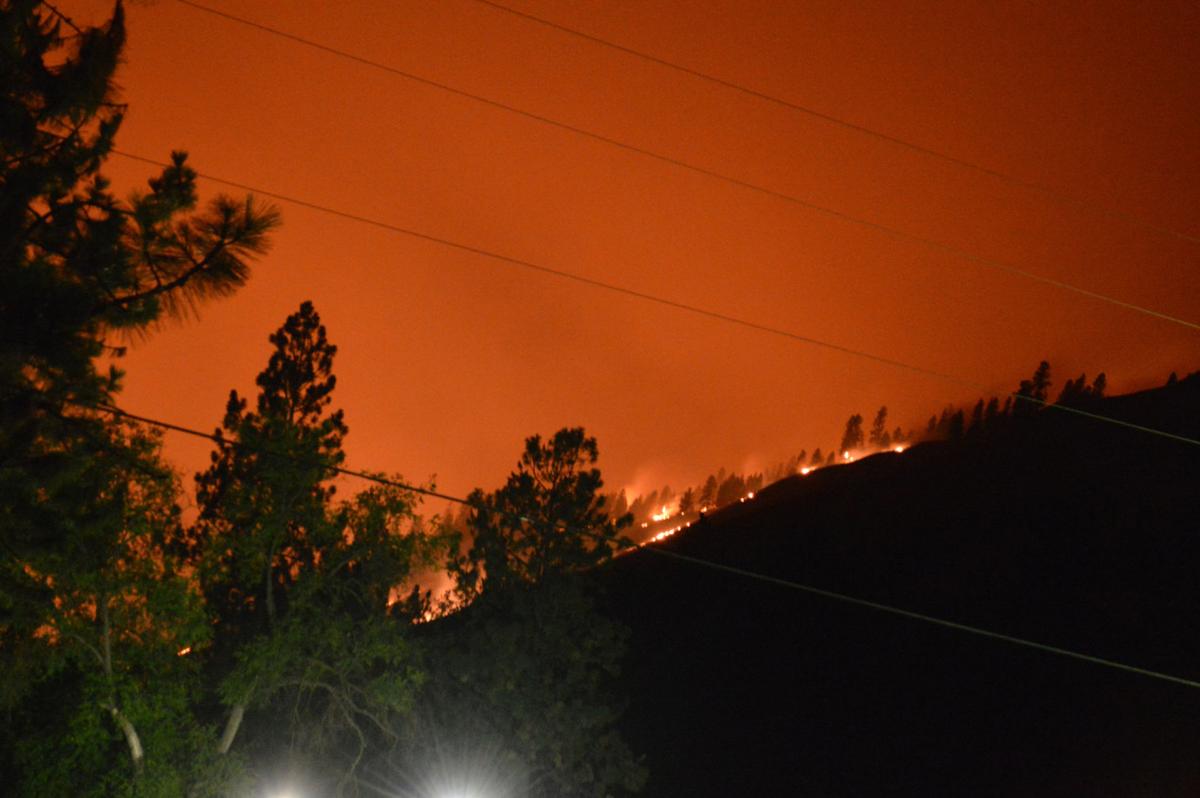 Steve Tool/ChieftainAbout 11 p.m.. the fire had crept down the Wenaha River to within .25 miles of the Shilo Inn Resort in Troy. By then the winds had died down considerably.

Steve Tool/ChieftainBy 3 p.m. on Aug. 20, the Grizzly Bear Complex had started its assault on Bartlett Bench above the Shiloh Inn Cafe.

Steve Tool/ChieftainFire visible up the Wenaha Canyon behind the Troy Store on Thursday night, Aug. 20.

Steve Tool/ChieftainA jet flies into the smoke to dump just one of a number of loads of fire retardent on the fire just north of Troy on the evening of Aug. 20.

Steve Tool/Chieftain “As eveining descended, the skies too on an ominous orange hue.” Taken from the Shiloh Cafe parking lot about 7:30 p.m.

Steve Tool/ChieftainAbout 11 p.m.. the fire had crept down the Wenaha River to within .25 miles of the Shilo Inn Resort in Troy. By then the winds had died down considerably.

While winds brought a welcome respite from the constant smoke of the last few days, those same winds left tiny ranching/resort town of Troy fighting for its life against the massive Grizzly Bear Complex fire. Troy is situated in the northern end of Wallowa County at the confluence of the Wenaha and Grande Ronde Rivers. It’s got a population of about a dozen people full time, but in the summer that number swells to 60 or more as family and fishermen flock in to enjoy the stark beauty of the area.

Thursday, Aug. 20, the hub of activity in Troy centered on the Shilo Inn Resort, and even with the fire five to six miles away a few people had gathered, showing the strain of worry – the wind had picked up considerably and smoke hung low and oppressive just up the Weneaha River Canyon. Troy itself was relatively smoke free, Thursday afternoon. Wallowa County Sheriff, Steve Rogers, had been on scene since 12:30 p.m. said, “That’s what worries me. That’s from the wind, and it’s blowing that fire toward us.”

Arlene Mullins and John Merriman of Anatone, Wash., brought coolers full of food and drink for the expected arrival of weary firefighters. Mullins son, Steve, fighting the fire with the Blue Mountain Fire district had called her earlier expressing worry the fire was getting away from them. “I’m doing everything I can to help, I hope it’s enough,” she said. She wasn’t the only one using that phrase as the day went on.

Husband and wife Doug Mallory and Kristin Yeager, local ranchers who also manage the Shilo Resort, remained determined through the strain as the fire edged down the Wenaha Canyon. “This is horrible, the way this wind is, I don’t know how you combat something like this in these conditions. The Shilo ranch just sent down a pumper, there might be some more personnel arriving from the state and Forest Service – I hope,” Mallory said.

At about 2:30 p.m., the area, which had been on a Level 2, or standby to evacuate notice, received the severe and final Level 3 – immediately evacuate. Sheriff Rogers had just returned from a run up the Forest Service 62 Road from Troy to Elgin. Rogers traveled about 20 miles up the road when the fire exploded, which precipitated the Level 3 notice.

“We’ve got everybody notified at Grouse Flats, Bartlett Bench, areas all the way into Washington. We’re also notifying Troy and Eden Bench right now,” Rogers said. He added strike teams from the Joseph and Enterprise fire departments were on their way to the scene to help with structural protection. “Everyone’s backed off the fire for now. We just set up Red Cross shelters at the Flora School and grange hall,” he said. He added that nearly everyone evacuated on request, although a few ranchers with firefighting capabilities stayed behind to protect their property.

“This is quite an animal. I’ve been on a lot of fires the last few years, and it’s the most significant one I’ve ever seen,” Rogers added.

Some time in the afternoon, Wallowa County Commissioner Susan Roberts arrived on scene to assess the situation. “It’s part of my job to take care of this county, and help however I can,” she said. Shortly afterward, Roberts was in the kitchen of the Shilo Inn Cafe helping Yeager prepare sack lunches for steadily arriving firefighters.

As the afternoon wind picked up speed, clouds of smoke, dark and ominous, blanketed the town and all points north, shedding cinders - an unwelcome gift. A caravan of firefighters, bone-weary and black with fire residue arrived from the 62 Road. The fire had overwhelmed them, and they pulled back.

One blackened firefighter said he’d never seen anything like it. “I saw a column of flames that looked 3,000 feet tall and I said to myself, ‘This fire ain’t taking no prisoners.’”

Another firefighter said it was all over when that same column of flames collapsed, as the fire was starting spot fires a mile ahead of itself. “It was just hell up there,” he said.

The word hell was repeated a number of times through the evening – not as an epithet, but as a statement of fire conditions. More firefighters arrived, pulled back from the blaze because of severe conditions. Structural protection was the name of the game now.

Evacuees Dean Dean and his wife, Red, stopped in Troy long enough to say, “We’re getting loaded up and out of here,” before driving off.

Battle-weary Steve Gray, an employee of the 4-O Ranch, seven to eight miles downriver from Troy had managed to save cattle, but not the property. “I tried, but had to leave when I looked up and saw a two-mile wide wall of flame,” he said.

As the winds continued, the fire ate its way steadily down the Wenaha Canyon and over Bartlett Bench and points north as helicopters dipped water with increasing rapidity from the Grande Ronde River directly in front of the Shiloh Resort. A jet dumped fire retardant while point and spotter planes buzzed overhead until darkness called a halt to the proceedings. The evening skies took on an ominous orange hue and flames could be seen coming up the Wenaha Canyon.

At 8 p.m. the group learned that the Governor had signed the Emergency Conflagration Act, too late for the 4-O Ranch, but they were relieved to know that help was on the way.

Kristin Yeager took a break from food preparation to pack the family car. “All we’ve got to get is our one-eyed cat,” she said. Noting the fire, she added, “I guess it’s up to the wind now.”

By 9:30 p.m. the fire was within a half-mile of the resort but slowing considerably as the wind seemed ready to die for the night as if in response to Yeager’s hopes. By 11 p.m. the fire was one-quarter mile away from the resort but moving very slowly - slowly enough that Mallory and Yeager decided they could sleep in shifts, keeping the resort open for the benefit of firefighters and Search and Rescue personnel. “We need to take care of these people. They’re trying to protect us,” she said.

Shortly after, the winds picked back up. By Friday morning, Aug. 21, reports would put the size of the fire at 48,000 acres and warn that high winds were expected to continue throughout the day.