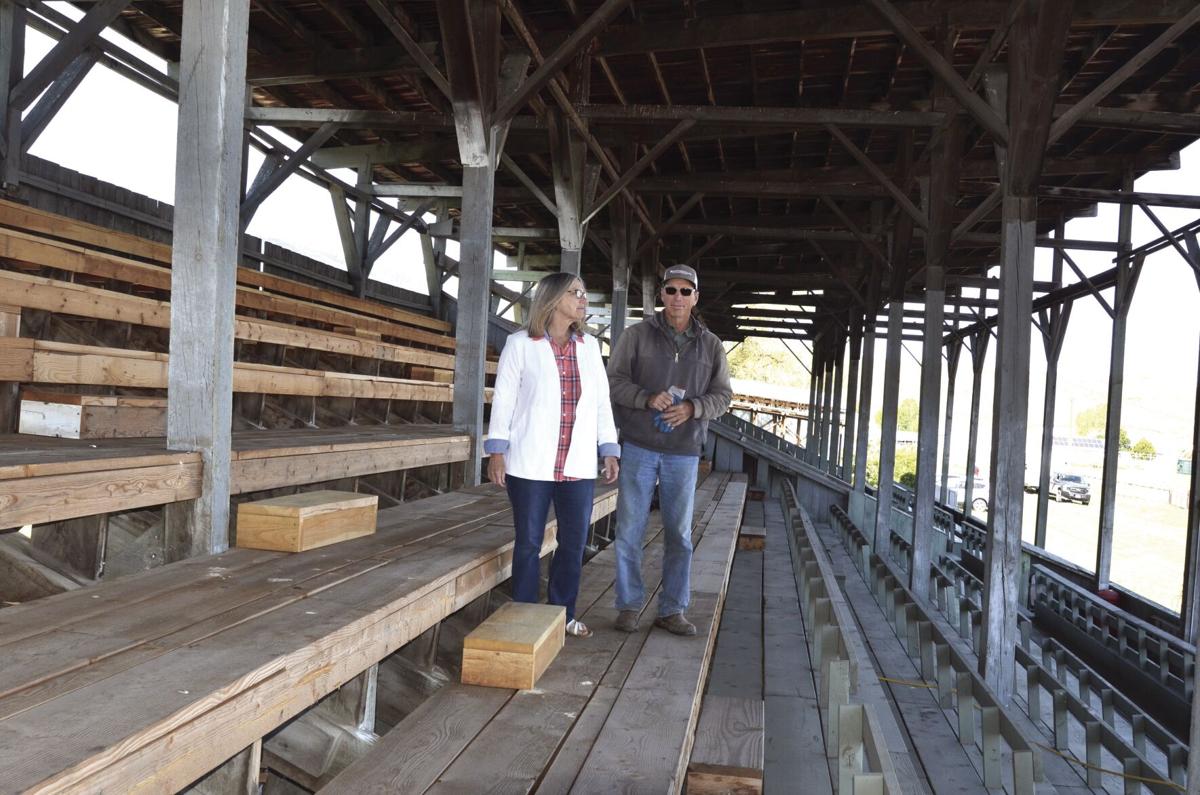 Wallowa County Fair Office Manager Tera Elliott and grounds Manager Greg Seufer survey the work on the grandstands at the fairgrounds Monday, June 7, 2021. The county is expecting to receive about a half-million dollars that can be used to revitalize the fairgrounds. 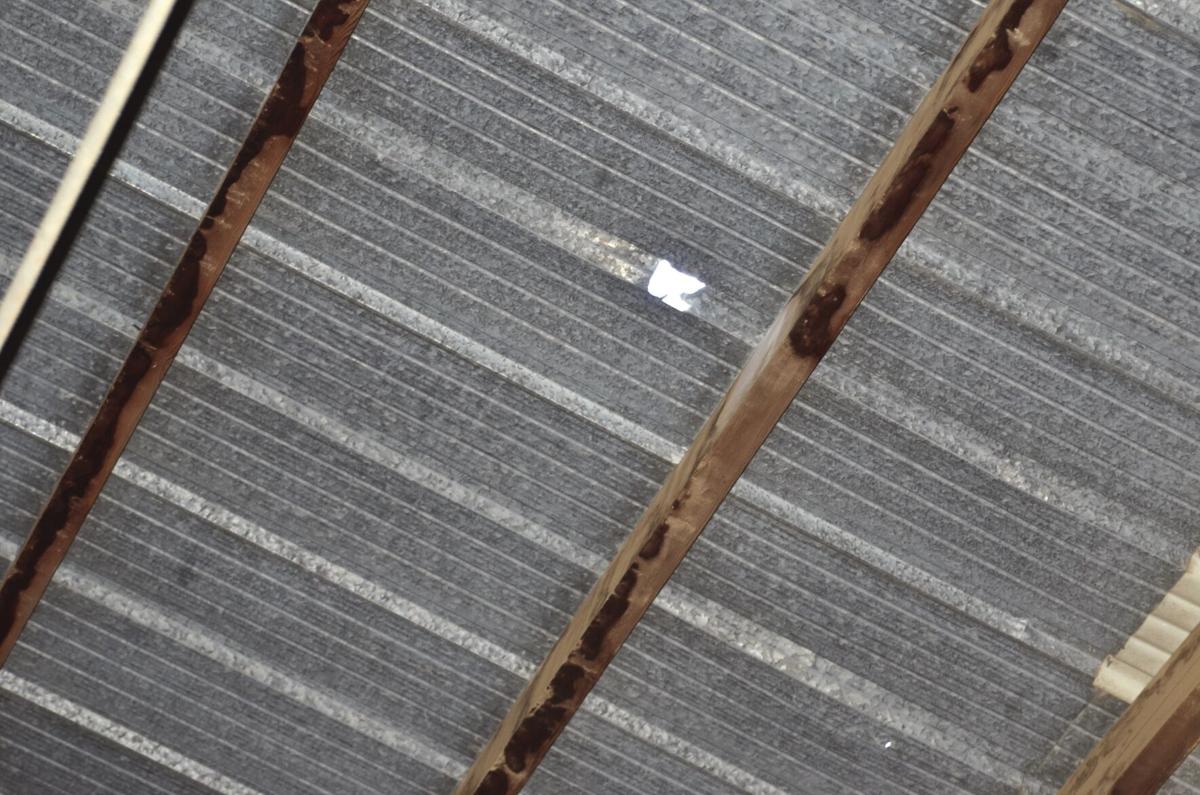 Holes are clearly visible in the roof of the show barn at the Wallowa County Fairgrounds, even in dry weather. A new roof is high on the county’s wish list of improvements with about a half-million dollars expected in federal aid.

A new roof on the show barn is high on the wish list of improvements at the Wallowa County Fairgrounds with about a half-million dollars expected in federal aid.

Wallowa County Fair Office Manager Tera Elliott and grounds Manager Greg Seufer survey the work on the grandstands at the fairgrounds Monday, June 7, 2021. The county is expecting to receive about a half-million dollars that can be used to revitalize the fairgrounds.

Holes are clearly visible in the roof of the show barn at the Wallowa County Fairgrounds, even in dry weather. A new roof is high on the county’s wish list of improvements with about a half-million dollars expected in federal aid.

A new roof on the show barn is high on the wish list of improvements at the Wallowa County Fairgrounds with about a half-million dollars expected in federal aid.

ENTERPRISE — The Wallowa County Fairgrounds in Enterprise have been in need of repairs for years, possibly even decades.

A huge windfall of cash that would serve as a major boon to getting many of those fixes completed could be just around the corner.

The fair board should receive later this year $500,000 from the American Rescue Plan Act signed in March through new District 58 Rep. Bobby Levy, R-Echo.

“It will be used for capital projects around the fairgrounds,” Fair Board Chairwoman Brinda Stanley said. “We developed a list early this year. We have not prioritized that list, so we’ll just work our way down through them and see how much each project is going to take. A new roof with moisture barrier on the roof is a high priority for us.”

The money comes from $240 million in ARPA funding for the state that was divided between Oregon’s 90 state senators and representatives to hand out for projects in their districts. Each senator received $4 million and each representative received $2 million that they then requested to send to those projects.

County Commissioner Todd Nash, who also is on the fair board, said he brought up the fairground’s needs to senators and representatives — including Levy — when he learned of the project money they had to dole out.

“When I first heard about that and was on the phone with a senator or representative, I did mention to them that the Wallowa County Fairgrounds would be a nice place to put it,” he said. “Didn’t hear anything back from Sen. (Bill) Hansell. It was about a week later that Rep. Levy decided to do that. We weren’t petitioned to say, ‘Where would you like this?’ It kinda came out of left field and caught us flat-footed a little bit.”

Nash said he was thrilled by the prospect of the fair board receiving such a boost to help restore the dilapidated grounds.

“I still believe that is the heart and soul of our community,” he said. “It’s where we gather not only for fair, (but) for events, for funerals, for graduation parties, you name it. The Cloverleaf Hall has the largest indoor space in Wallowa County.”

Many of the buildings at the grounds need varying levels of repair, with the total cost estimated at around $647,000.

Grants and fundraisers have been used through the years to help fund upkeep, and Stanley, who has been on the board since 2010 and been the chairwoman most of that time, said there is an effort to get some repairs done annually.

“We try every year to have money in our budget to conquer some project on our fair,” she said, pointing to the grandstands as an asset that recently were upgraded.

Even so, Stanley admitted that, “We struggle to support our fairgrounds. This is going to be much needed.”

Nash rattled off a laundry list of restoration tasks that need to be done.

“Right now, the indoor area is in pretty tough shape. It needs a new roof. That was one of the top priorities,” he said. “There’s quite a few things with Cloverleaf Hall itself, the primary one being the furnace. There is an outside chance we’re going to get money to do that. But all of the buildings, the arena itself, the outdoor arena — the footing gets complaints every year from horses slipping.

“The arena infrastructure, there with old panels and rotted posts. There is just a myriad of things there that need help with. Outdoor livestock facilities are in need of repair.”

Bringing restrooms to Americans with Disabilities Act standards, upgrading the snack bar and more are also on the list.

Stanley said she believes the grandstands are the oldest structure on the grounds, and added the beef and sheep barns were constructed in the 1940s.

“I’m hoping at our fair board meeting we’ll prioritize our projects so we know what is No. 1,” she said.

It’s uncertain exactly when the funds would be provided to the board. According to EO Media Group reporter Gary Warner, the money would be in an “as of yet undesignated bill” and would be part of the 2021-23 budget, but won’t be made official until the final day of the legislative session, which will be, at the latest, June 27. The budget goes into effect July 1.

Stanley said she hopes the money is in hand so that work can begin later this fall before the snow flies. Work would then resume in 2022.

If the funding does indeed come through, “it means a facility that is more rentable and more ready for events (in) our community which is important to all of us,” Stanley said. That’s the main thing.

“It will, for our community, be huge.”