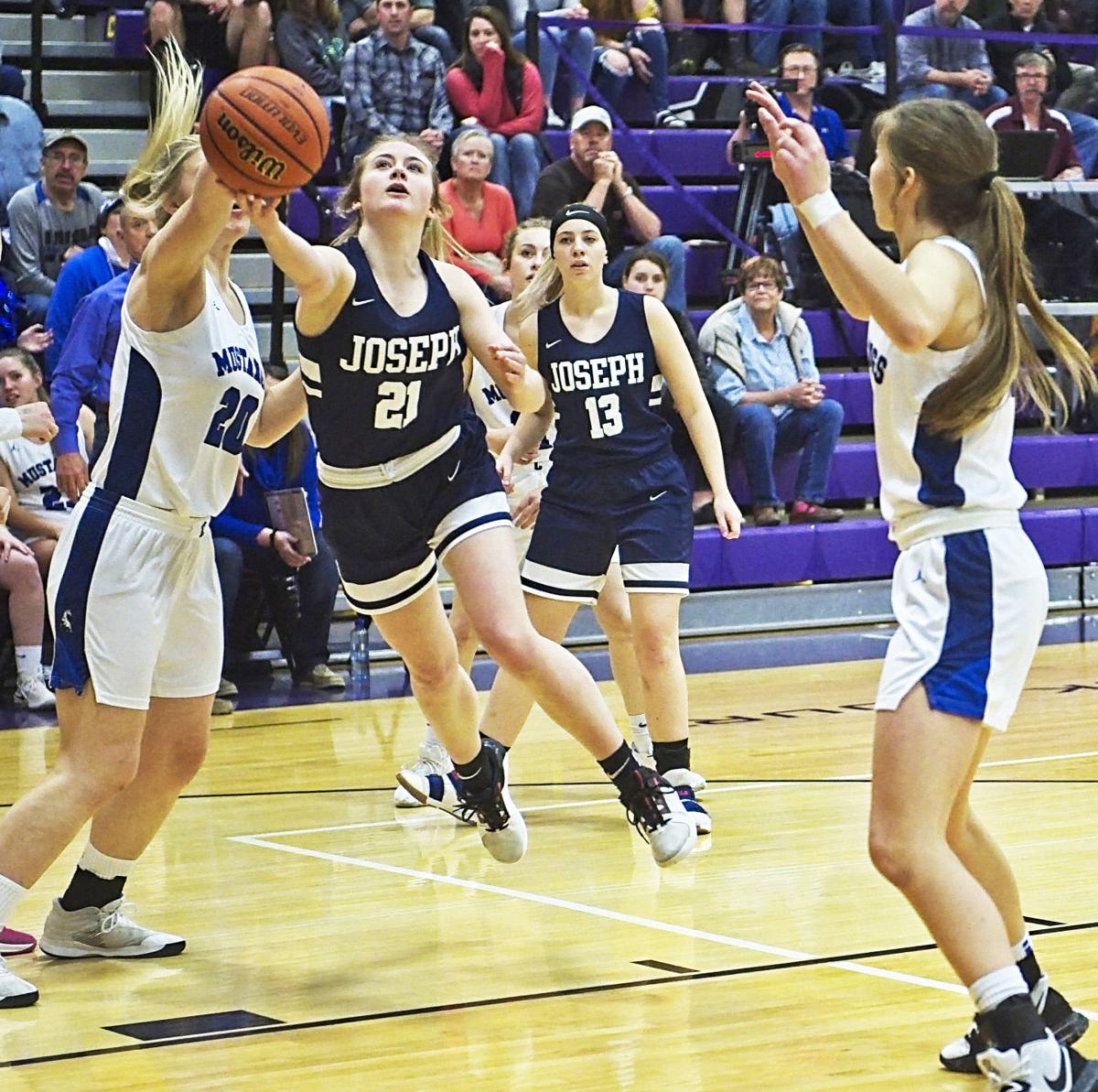 Joseph’s Sabrina Albee drives for a layup during the state semifinals against Crane in March. Basketball, which was slated to start practice Dec. 28, 2020, has been pushed back to Season 4 and a May 2021 start date under the latest calendar update by the Oregon School Activities Association executive board. 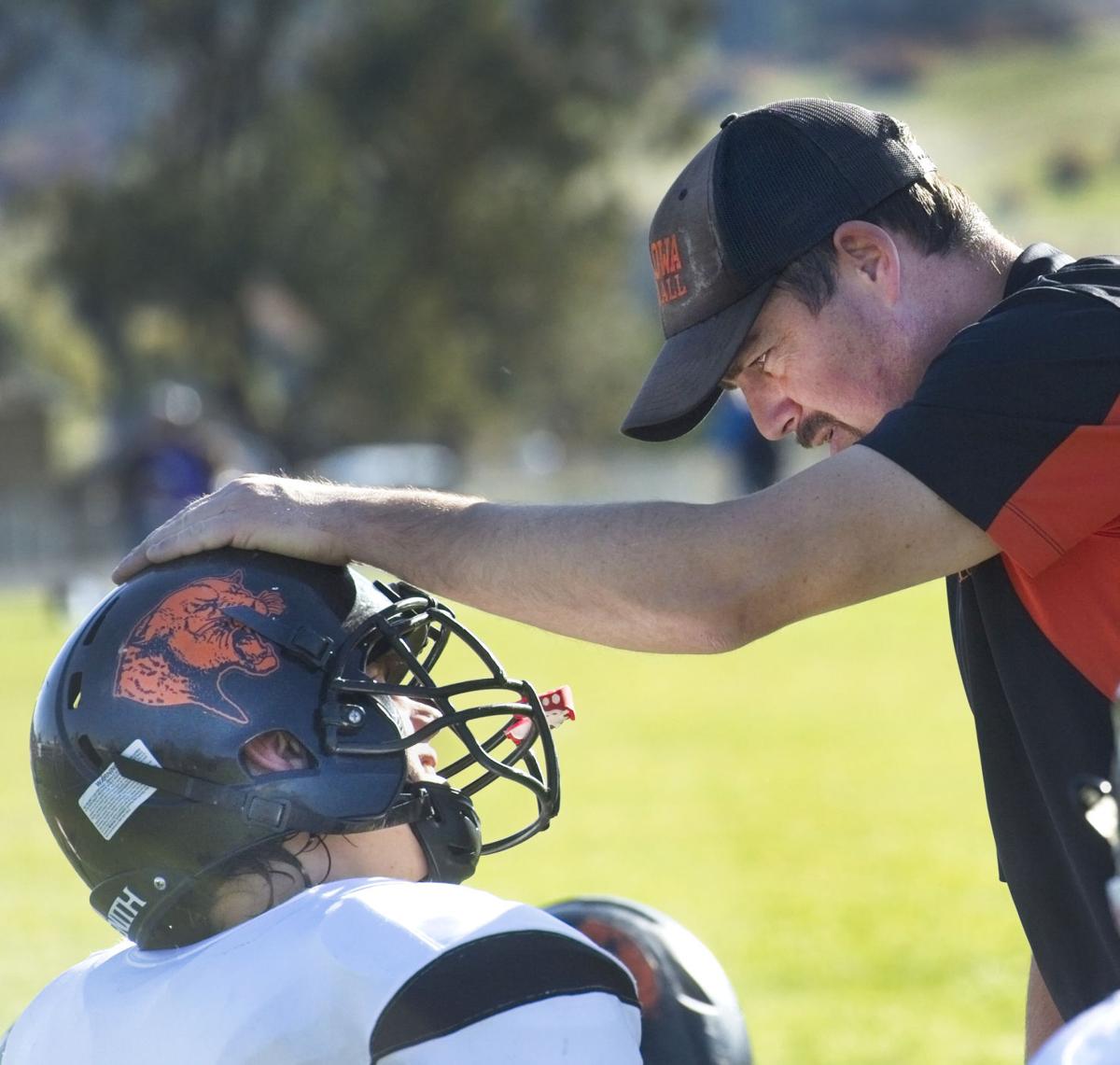 Wallowa head football coach Matt Brockamp talks to a player during a game in 2019. Football is slated to begin practice for Season 2 in February under the latest season calendar put in place by the OSAA.

Joseph’s Sabrina Albee drives for a layup during the state semifinals against Crane in March. Basketball, which was slated to start practice Dec. 28, 2020, has been pushed back to Season 4 and a May 2021 start date under the latest calendar update by the Oregon School Activities Association executive board.

Wallowa head football coach Matt Brockamp talks to a player during a game in 2019. Football is slated to begin practice for Season 2 in February under the latest season calendar put in place by the OSAA.

ENTERPRISE — There wasn’t much surprise among Wallowa County athletic directors and coaches at the Dec. 7 decision by the Oregon School Activities Association executive board to adjust the 2020-21 sports calendar again and move the start of Season 2 to Feb. 22.

“Wallowa County, we’re in a pretty good situation so far as far as the metrics,” Joseph AD Jason Crenshaw said. “The rest of the state isn’t looking good. The idea was to try and preserve as much of the sports season as we could. That was the rationale behind it.”

Season 2 was going to be the traditional winter sports, but two are currently banned by Oregon Health Authority as full-contact sports — basketball and wrestling.

Those sports are now moved to Season 4, slated to start practice on May 10, while traditional fall sports of football, volleyball and cross-country will be played in Season 2.

Crenshaw said he has consistently heard from student-athletes wondering what would happen by the previous start date, which had been Dec. 28.

“They’ve all been anticipating and excited about being able to play, and now it’s not until May,” he said of those athletes in Season 4 sports. “At this point a lot of our kids are resigned to the fact that it’s not going to be normal no matter what we do. It’s kind of a mixed feeling they have. They want to play desperately, but the prospect of not playing is worse than the alternative.”

Season 1 has been extended until that February start date, but some of the restrictions in place still impact what schools can do, and it’s causing the Wallowa County ADs to get creative.

“I’m happy they extended Season 1 so we can make some local decisions, but then (with) restrictions ... that clearly is going to be less traditional than what we normally do,” Enterprise Athletic Director Beccy Nordtvedt said. “Since that information came out I’ve had several meetings with not only our normal Blue Mountain league ... (but also) Jason Crenshaw and Mitch Frye (Wallowa AD) from here in the county. We’ve met and talked about trying to offer some opportunities. ... We’re looking at some opportunities that are not traditional.”

The local ADs, she said, are in agreement about trying to provide options to keep student-athletes moving.

“Our goal right now is to provide activities for the kids that they’re able to do that are extracurricular so they are staying active with (other) kids, staying physical, and (to) promote their social and mental well-being,” Nordtvedt said.

Enterprise girls head basketball coach Mike Crawford has tried to stay positive and encourage his team in spite of the continuing changes.

“You keep the hope going to try and keep the energy up,” he said. “I talked to all my kids about it (Dec. 8). There is no doubt they are bummed out. It’s not the best scenario for the school and the energy of the school….

“I feel bad for the kids who have put in the effort to do the best they can. They want to play at this level. We have a good group of girls. Unfortunately they may never get that opportunity to finish it off. We want to say there is hope out there we’re going to get through this pandemic at some point, but it’s difficult. You don’t know what’s going to happen.”

The same message of hope and optimism is being carried at Wallowa, and boys basketball head coach Cody Lathrop said even his players have given him optimism.

“They said something (Dec. 10) that uplifted my spirits — Zeb (Hermens) said there is still hope we’re gonna have it,” Lathrop said. “These kids aren’t losing (hope). We’re going to cultivate that as a family.”

Lathrop said he and the players will continue preparing for a season when, or if, it does come around.

“In order to build a program we have to be consistent, and if we just stop what we’re doing, then we’re not building — we’re stagnant,” he said. “We take the opportunity we’re given — even if it’s a crappy opportunity — and we do what we can to make a positive out of it.”