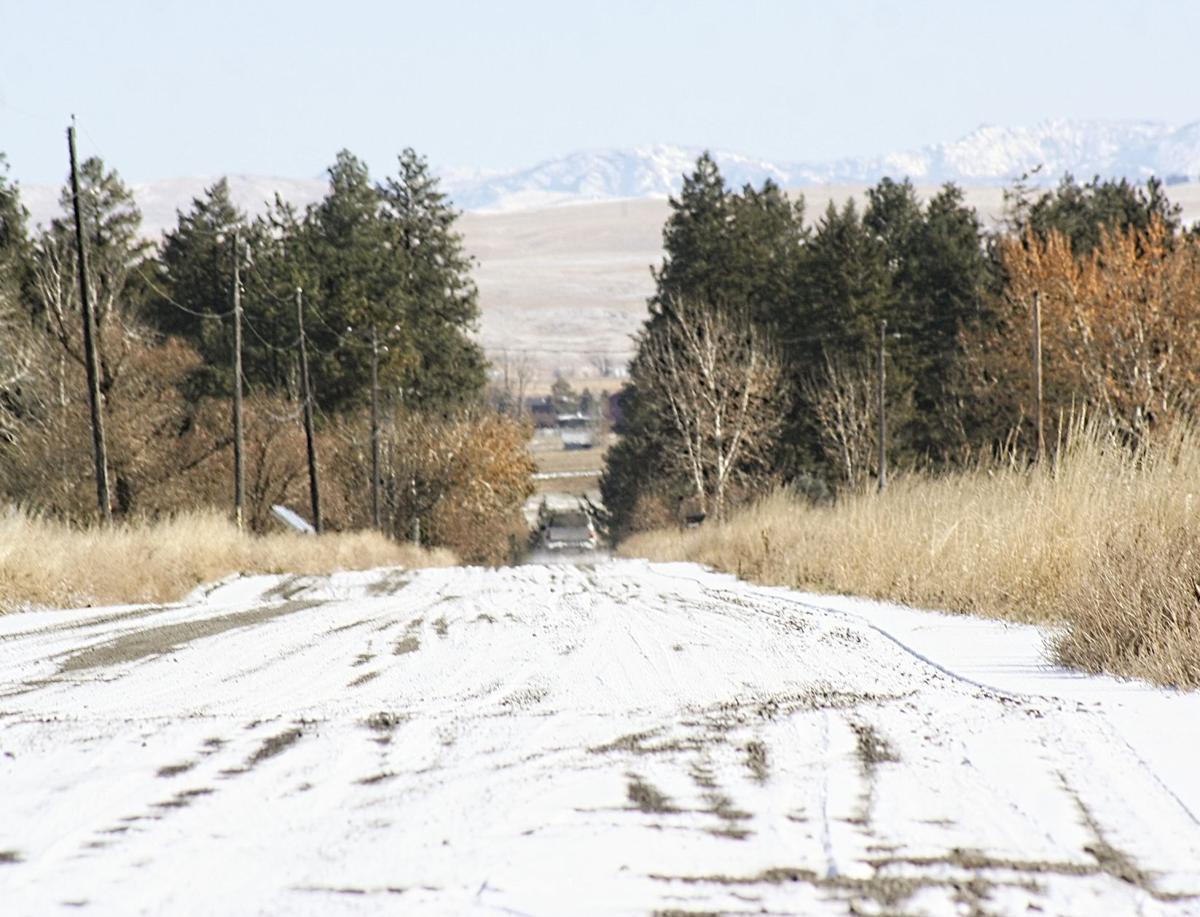 A car travels toward Joseph over compacted snow that remains on Russell Lane around noon Tuesday, Oct. 29, after a snowfall the night before. Most of that night’s snow was gone by later in the day, but road crews know more is coming. 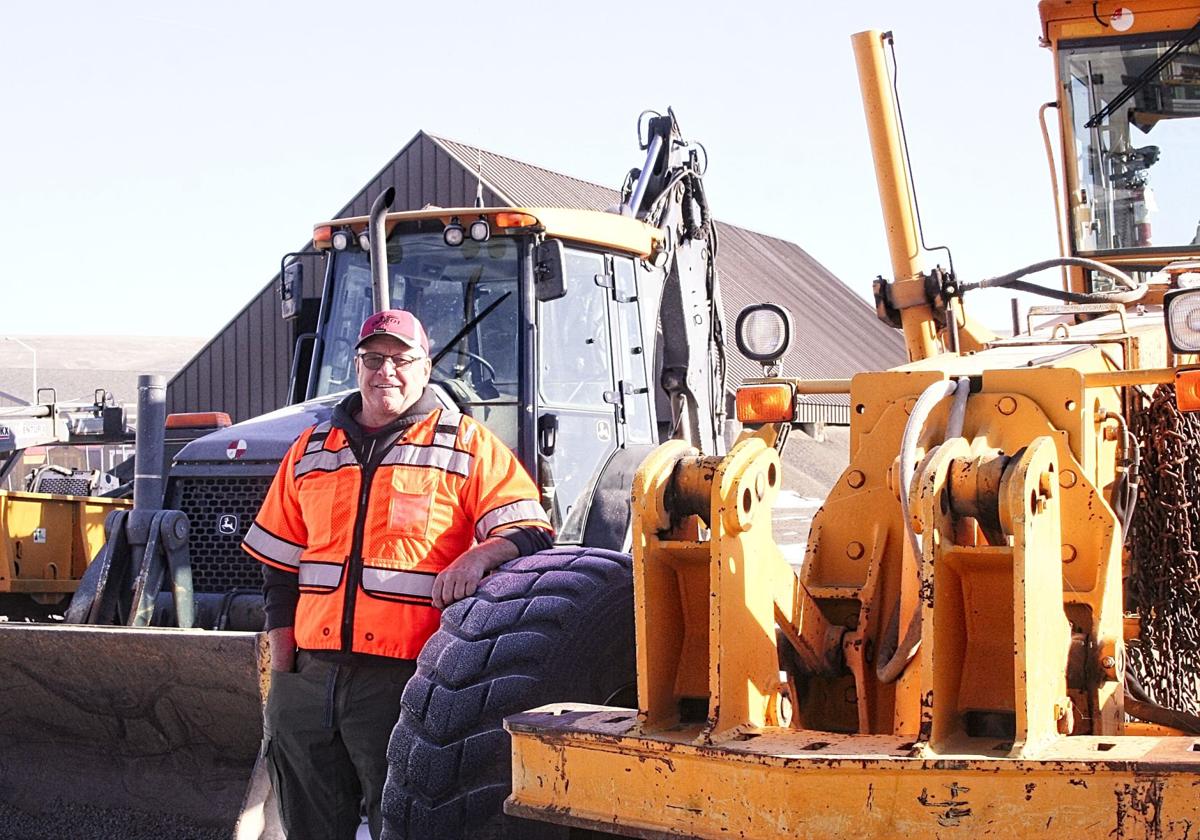 Mike Laughlin, who’s worked with the Oregon Department of Transportation for more than 30 years, stands between a backhoe, left, and a road grader that are ready and waiting at the ODOT shop in Enterprise for the first heavy snowfall in Wallowa County.

A car travels toward Joseph over compacted snow that remains on Russell Lane around noon Tuesday, Oct. 29, after a snowfall the night before. Most of that night’s snow was gone by later in the day, but road crews know more is coming.

Mike Laughlin, who’s worked with the Oregon Department of Transportation for more than 30 years, stands between a backhoe, left, and a road grader that are ready and waiting at the ODOT shop in Enterprise for the first heavy snowfall in Wallowa County.

Colder temperatures, shorter days and occasional snow indicate winter is on the horizon, and those responsible for keeping Wallowa County roads and streets clear are getting ready for it.

Oregon Department of Transportation keeps clear about 127 miles on the state highways — OR82, OR3, OR350 and OR351 — including where they go through cities, while each city is responsible for its own streets. The Wallowa County Road Department clears a total of about 700 miles of paved and gravel roads..

Brandon Tanzey, roadmaster for Wallowa County, said his crews have been preparing for their coming winter work.

“We’d like to hope for the best and expect the worst,” he said of the likelihood of a rough winter ahead. “We’ve got everything geared up and ready to go.”

Tanzey said the county has a fleet of 10 vehicles of various sorts – graders, plow trucks, sanders, etc. — to handle the approximately 700 miles of county roads and a crew of 11 people to operate them.

He said the county gets much of its sand/gravel mix from ODOT.After the snowfall of the night of Oct. 28-29, county crews deposited sand/gravel on areas that didn’t get the sun and still had compacted snow, Tanzey said.

Each road department determines for itself the circumstances at which they break out the plows.

Ronnie Neil, public works director for Enterprise said that his crew normally comes in about 4 a.m. if there’s more than 2½ inches of snow on the ground.

First, the city takes care of the downtown and main emergency routes and school areas, and then concentrates on residential areas. Similar priorities are common in other cities in the county.

“We play it by ear,” which usually means 2 to 4 inches, ODOT’s Tanzey said.

All the road departments except Joseph use sand or a sand/gravel mix, particularly on hills and at curves. Joseph doesn’t use sand because of the few hills in town, said Larry Braden, city administrator.

Unique among the cities, Lostine has a contract with the county where the city calls for assistance as needed, according to City Recorder Toni Clary. But for the most part, residents take care of the town with their own plows and equipment, she said.

“For the most part, we have some really amazing residents who are out here hitting the streets before anyone even knows what’s going on,” she said. “But if we do need help, we get it from the county.”

Only the ODOT uses any kind of de-icer.

Tom Strandberg, public information officer for ODOT, said gravel, salt, a chemical de-icer or other products are used depending on the circumstances. Often, de-icer is used on bridges and other trouble spots.

He discounted the likelihood the de-icer would cause corrosion to vehicles or pollution to waterways or roadsides.

“The amount we apply is typically not an issue,” Strandberg said. “There’s a fine line between where motorists need to have a safe roadway and also protecting the environment.”

He said the de-icer contains a corrosion inhibitor, but still recommended motorists wash their vehicles after traveling on roadways where de-icer may have been used.

All the cities have ordinances requiring businesses and residents to keep their sidewalks and walkways clear of snow, as well as keeping vehicles and other obstructions out of the way of plows.

Wallowa has been in the process of sending notices to residents to move inoperable vehicles and basketball hoops in front of their homes so snowplows can do their jobs, said City Recorder Carolyn Harshfield. She said they’ve been given 15 to 30 days to remove them, “depending how long they’ve been there,” she said.

Lostine has an ordinance to keep vehicles off the streets and out of the way of snowplows that some might find nearly obsolete.

“The ordinance actually includes horse-drawn buggies and carts,” Clary said, but it suffices because it includes motor vehicles.

When it comes to helping motorists who have had trouble because of slick roads — slide-offs or crashes — road crews are a bit limited. Road crew spokesmen agreed they’d render immediate aid if needed, but usually call 911 for a tow truck or whatever emergency services are required.

“There’s so much liability involved,” Tanzey said. “You twist off a bumper and end up buying them a new car.” The county crews have the ability to call in help for people, but are unlikely to tow anyone out of a ditch.

Mike Laughlin, of the ODOT shop in Enterprise, said he doesn’t mind getting called out after dark and working all night.

He emphasized that his crew — like other road crews in the county — are local folks who are conscientious about what they do.

“The crew we have is local people who take great pride in what they do,” he said. “But obviously, you’re not going to beat Mother Nature.”