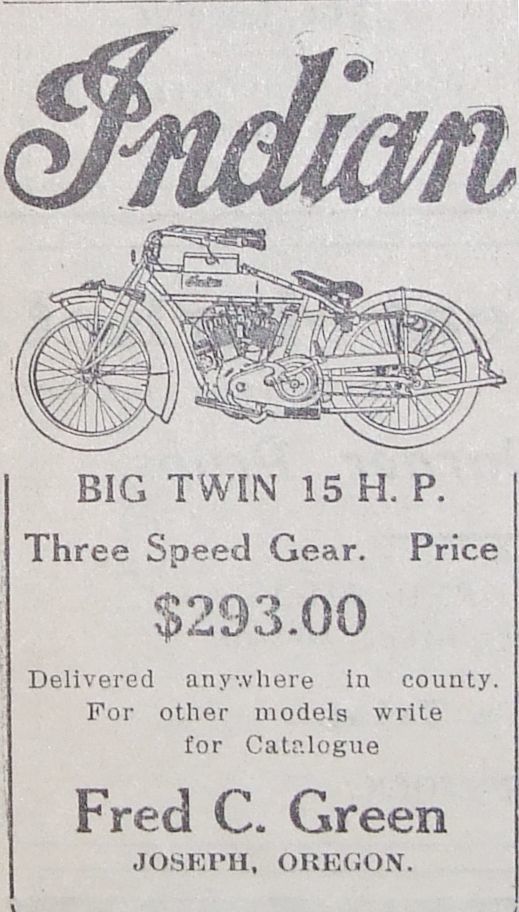 Chieftain archives A hundred years ago, a brand-new Indian motorcycle was readily available for purchase in Wallowa County, as this 100-year-old newspaper ad will attest. 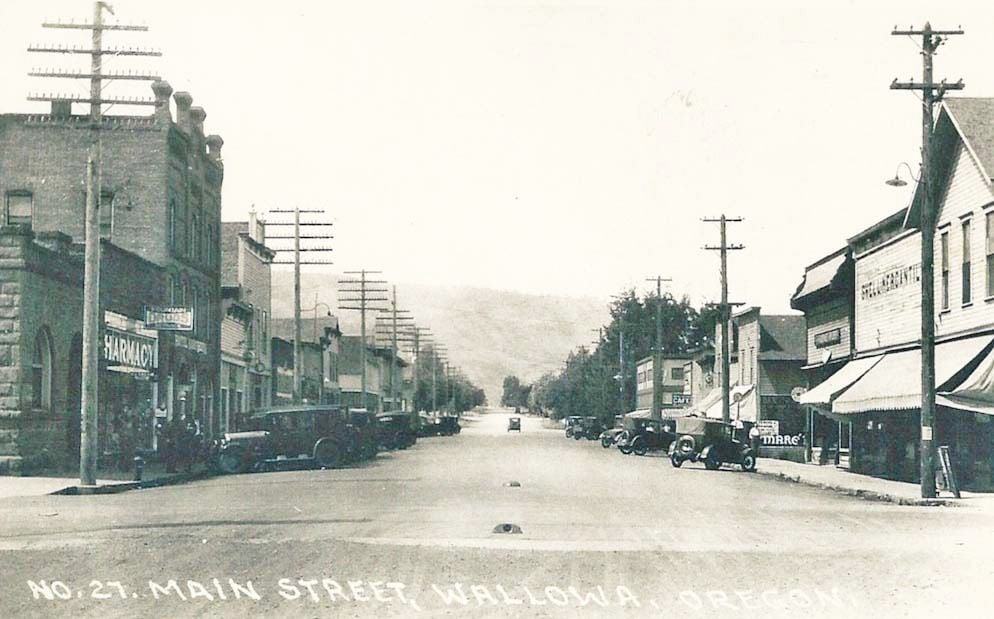 Chieftain archives A hundred years ago, a brand-new Indian motorcycle was readily available for purchase in Wallowa County, as this 100-year-old newspaper ad will attest.

By the end of this week the East Oregon Lumber company’s railroad will be finished to the small sawmill where timbers were cut last fall for the large plant in Enterprise. That is, the rails will be laid so that a construction train can pass over. The train has been going over the line every day, pushing on a third of a mile a day, but considerable ballasting will be required before much freight can be handled over the road.

Construction work on the new Enterprise sewer system will begin next Monday, April 5. J.H. Childs, the contractor, sent word to this effect to the Record Chieftain on Tuesday...

Several Wallowa county sheep men have gone to the meeting of the Oregon Woolgrowers’ association, at Baker today and tomorrow. Fred W. Falconer is president of the association. The primary purpose of the gathering is to seek some plan whereby the growers can get the maximum price for their wool. It is felt that if the growers act in unison, and if none break ranks and sell prematurely, better prices can be realized than with individual selling and without an understanding. ... Recent sales in Idaho would indicate a price of about 22 cents for the Merino wool which predominates in Wallowa county...

Sheriff Halsey, after a week’s absence in Wallowa county in search of a couple of young men, ... against whom the charge of stealing three head of horses ... had been lodged and for whom warrants had been issued, returned Tuesday. He recovered the horses, which had been re-branded, over the old brands, and turned loose; and while he had been able to pick up several clues and get on the track of the men he was after, he was unable to definitely locate them, as friends of the young men evidently kept them posted, thus making it possible and easy for them to elude the officer.

Mrs. Delbert Wart has received word from her husband that he is now in England in a hospital. Delbert has been with Gen. Patton’s 3rd army. He went across Feb. 8, 1944, and landed in Scotland. From there he went to England and on to France where he was in his first battle at Fontainbleau on the Seine river.

About 60 Liberty grangers and their neighbors gathered at the Liberty grange hall Sunday to enjoy the pot luck dinner given by the ladies of the grange. ... The dinner was served in the basement dining room and after it was heartily partaken of and thoroughly enjoyed, the group went upstairs to the hall where a short program, prepared by the grange lecturer, Mrs. Vada Daggett, was given.

EDITORIAL: We have never been able to appreciate the validity of considerations which are supposed to make it necessary to censor information concerning the character and extent of wounds or sickness of men in the service. The anxiety of the relatives and friends of a man who has been reported wounded in action or confined in a hospital at some undesignated spot, with no information as to his condition, is so acute as to be beyond description. The lack of information builds up worry and speculation until the distraught family could not be more upset by information of the most serious injuries.

Mrs. Lucille Miller, sentenced to life imprisonment for the murder of her dentist husband, Dr. Gordon Miller (formerly of Enterprise), was denied a new trial last week and was committed to the California Institution for Women at Corona to start serving a life sentence. ... Mrs. Miller’s attorney served notice that he will appeal to the California State Court of Appeal. ... Recently Mrs. Miller’s attorney filed a $750,000 suit against the Volkswagen Werk of Berlin, Germany, the manufacturer of the car in which her husband burned to death, alleging that the fuel system on the car was improperly constructed and that this negligence led to the fire in which Dr. Miller died ... last Oct. 8. The state maintained that Mrs. Miller set the car afire and the defense claimed that the fire was accidental.

A full ten years after the U.S. Forest Service announced its intention to co-locate all its district offices in Wallowa County into one facility, moving day for the agency has almost arrived. The new log building on the hill just west of Enterprise is finally ready for occupancy. Personnel, desks, computers, file cabinets and equipment from the Wallowa Valley, Eagle Cap and Hells Canyon NRA ranger districts will be moving into their new home during the week of April 9.

An enthusiastic campaign by school boosters in three county school districts paid off in a big way this week, when the $296,044 ESD levy passed by over 600 votes with an exceptionally high voter turnout of 72 percent in the mail-in election.